One of the blogs I follow, Wild Australian Art, by Peter Brown, inspired this painting. He is working on a painting of a Reef Egret called, Launch. It was the addition of the branch to that great painting, that reminded me of a photo I shot in Nayarit, Mexico, years ago. 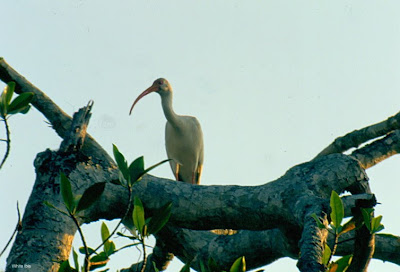 This branch looks nothing like Peter's branch. I have no idea why this photo jumped into my mind. All I knew was that I wanted to paint it.

However I was not real enthusiastic about including the White Ibis. So the search for a suitable subject to place on the branch began. I sorted through my photographic files from Mexico, Costa Rica, Ecuador, Peru, Thailand, and Cambodia. I considered various raptors, parrots, trogons, bee-eaters, and wading birds of many species. They all seemed to be good subjects to paint, but I have painted so many birds lately.

Then I decided to try adding a cat of some kind. That would have worked just fine, but it's so cliche. Then I thought about doing a painting of a monkey. I have good photos of many species of monkeys, and I don't remember ever painting a monkey. For whatever reason I could not get enthusiastic about the idea.

I love reptiles, and have many, many photos of them. I looked over photos of Boa Constrictors, and I even drew in an iguana. Instead I settled on a male Green Basilisk. 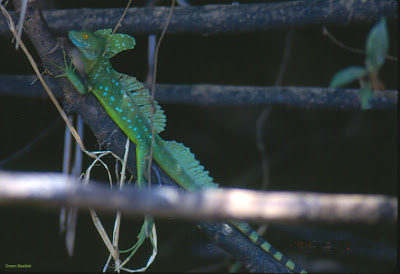 This is a lizard I photographed at Cano Negro, near the Nicaraguan border in northern Costa Rica. They are locally known as Jesus Christ Lizards  because of their habit of running across the surface of the water. They always hang out on branches overhanging the water. To escape danger, they rise up on their hind legs, and sprint across the water's surface. I have seen them run across wide rivers in a split second. They are beyond cool. 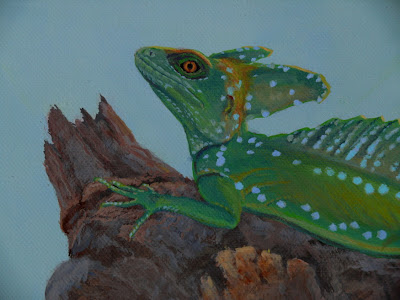 Yet another painting that will probably never sell. Nevertheless, I thoroughly enjoyed painting this one. I did sell a small painting last night. A Red-backed Vole, (mouse), amoung fallen leaves.