These are two paintings originally done in 2003. They gathered dust in a gallery since then until I got them back on Thanksgiving Day. Naturally for me, I could'nt just leave them be. I had to play with them in the hopes that I could somehow improve them.

The Gray Glider, 12x24". I think the overall idea of the painting is good, but I did a very sloppy job of painting this Great Gray Owl. 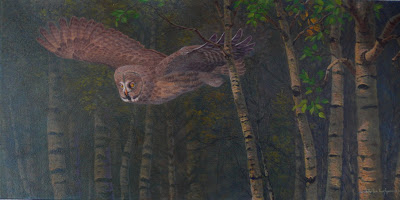 This is the new version. I repainted every square millimeter of the old painting.

The same version of the painting, photographed in a different light.

The next painting, Snowshoe Shelter, 15x30" was based on a scene of a Snowshoe Hare in the forest across the street from my house. Since then, the land has been developed and a mini mart now stands in it's place. I liked the overall painting but the hare's face looked really funky to me. The low angle of the winter sun, creates warm colors, called alpenglow. 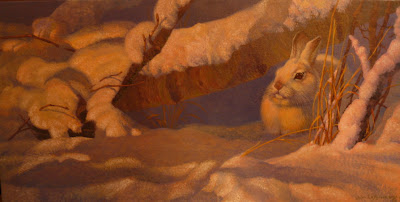 So here is the new version of the painting. definitly better. 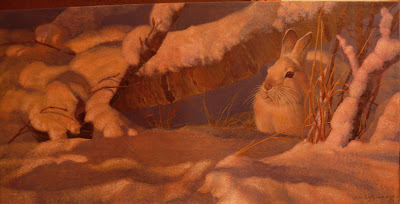 Below is a close-up of the first version of the painting. 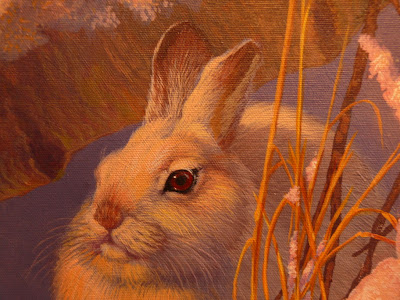 This is the new Snowshoe Hare. I left the eye as is, but I changed most of the rest of the painting. Good enough for me, at least for now. 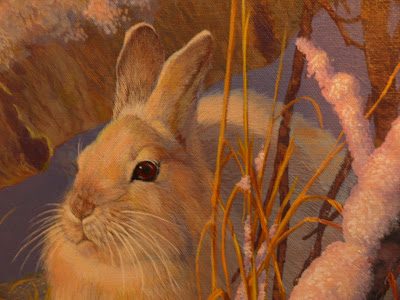