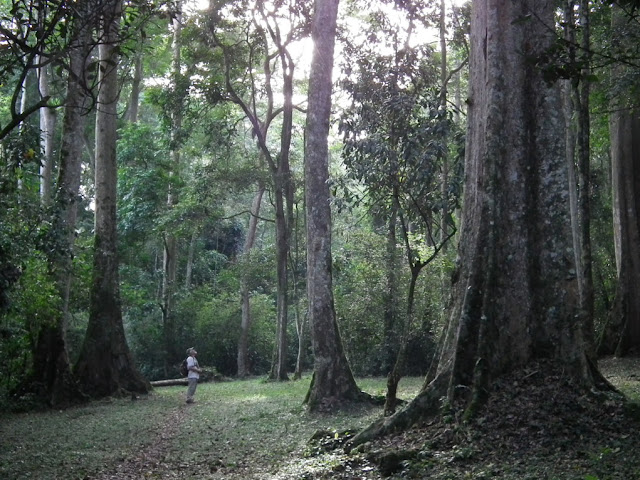 After we left Entebbe we headed to the southwest and stopped overnight at the small, Mpanga Forest Reserve. The place did'nt have much wildlife but it had extremely wide, well maintained trails. Gary peers up at the large trees while standing on the main trail.

A beautiful Lizard Buzzard. The term buzzard is often used to describe vultures in North America but it is properly applied to 'buteo'-type hawks. 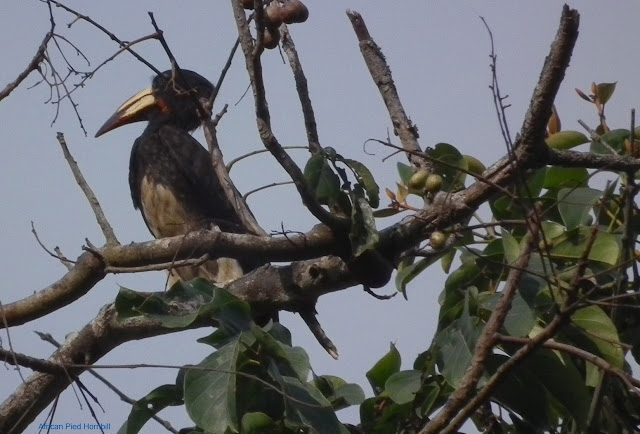 There were good numbers of hornbills in Mpanga Forest, but there are lots of hornbills just about everywhere in that part of Uganda. The bird above is an African Pied Hornbill. 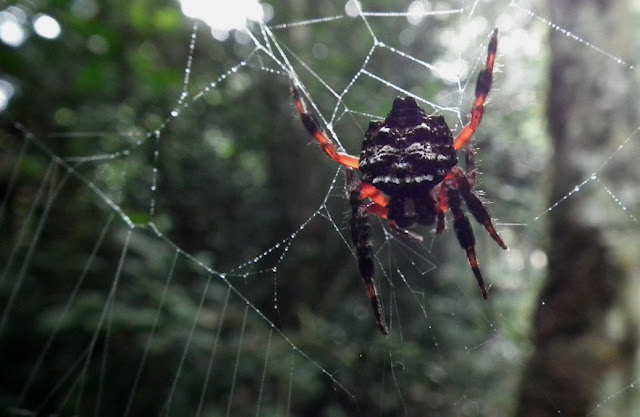 This spider seems to have a face with a moustache on it's back. 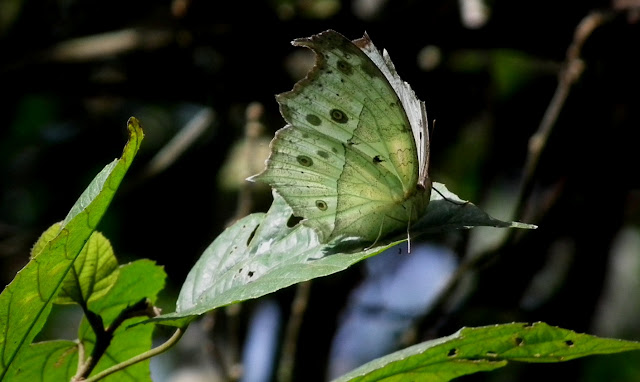 When you can't find a bird to photograph, you turn your attention to butterflies. 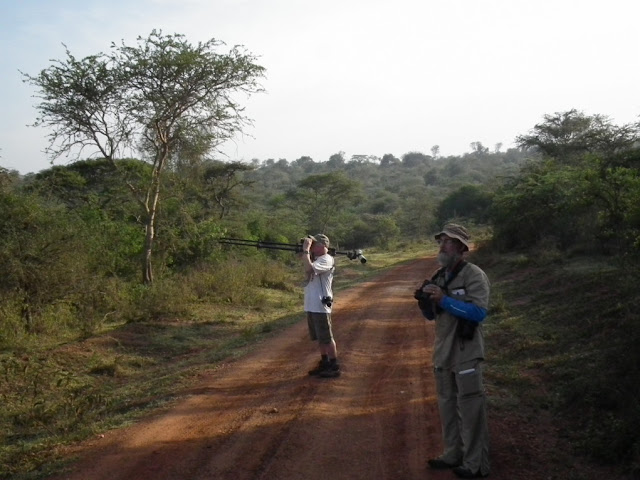 Tom, (right) and Gary, (left) search out the birdlife in the scrub habitat in Lake Mburo NP. We got lectured for walking along the road without an armed guide. We would have been hanged for that offense in Kruger NP in South Africa.

Topi is an antelope species that is related to the Hartebeest clan. The pile to the left is a termite mound. 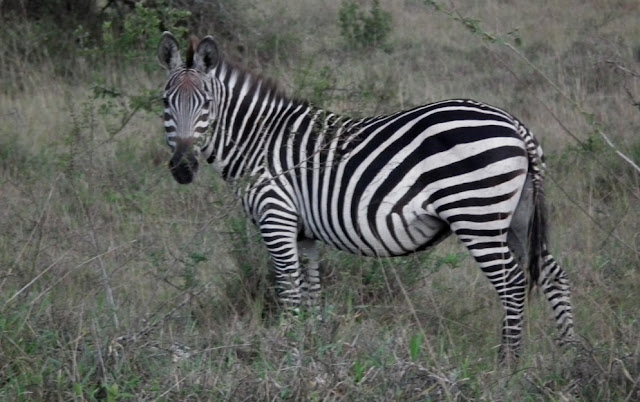 Lake Mburo is the only place where we saw Zebras.  National parks in Uganda have been ravaged by war and poaching in past years. Now they suffer from being woefully underfunded. Poaching is still a major problem in some areas as well. That is one reason that there is not a full compliment of species in any of the national parks. 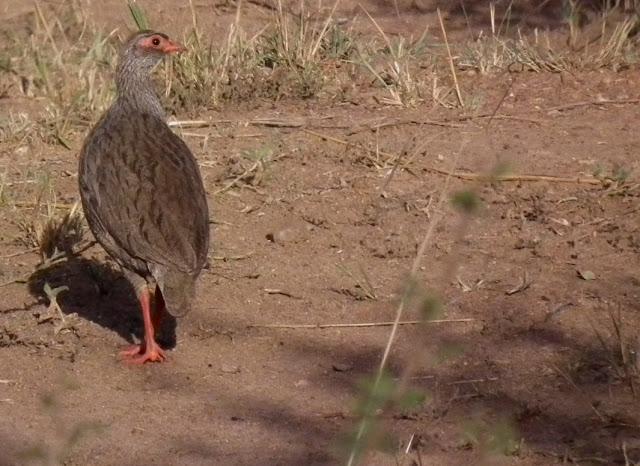 Red-necked Spurfowl and other francolins were far less prevalent in Uganda than in South Africa, but I should quit comparing the two countries. 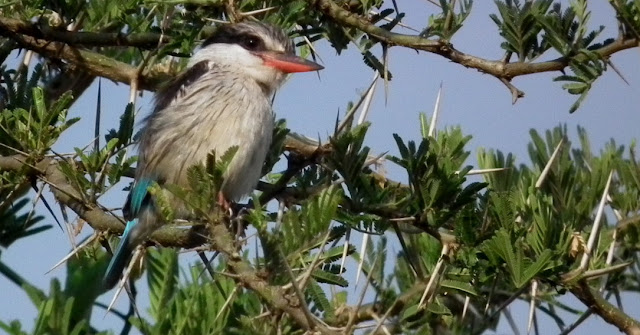 Striped Kingfisher is a new species that we picked up in Mburo. It is a relative of the Woodland Kingfisher and also does not fish. 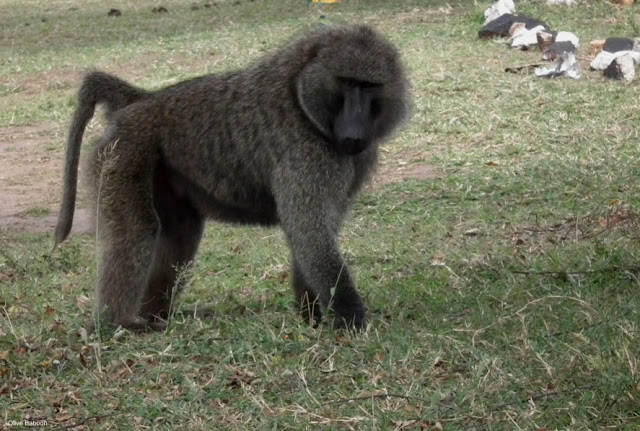 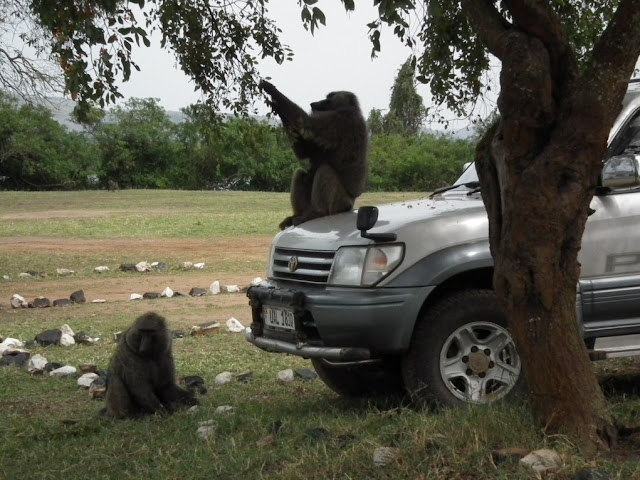 They were not at all shy, and did'nt hesitate to make use of our rental car. 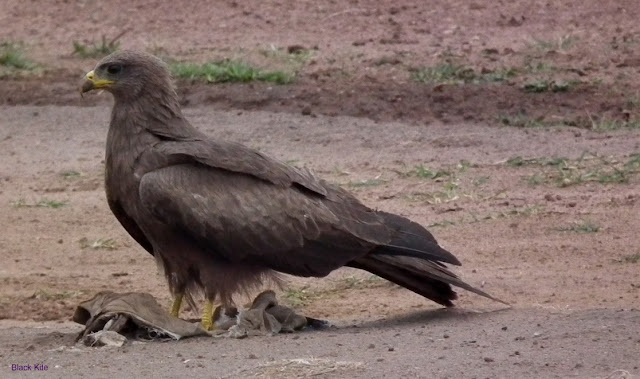 A Black Kite rummages through trash like the Ravens do around my part of the world. 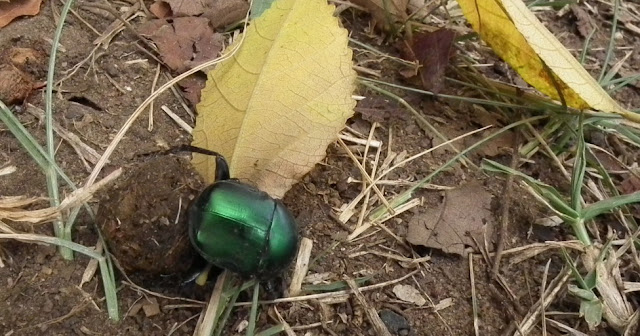 A Dung Beetle doing it's thing.
Stay tuned because the best is yet to come from Lake Mburo.
Posted by john at 7:17 PM

Dwarf mongooses?? (i.e. the best yet to come...) I know that Lake Mburo is the only park in Uganda in which you can see them. And what could be better??

Great photos; I'm thoroughly envious. Although I must admit that while I loved holidaying in Uganda, it gave me a new appreciation of South Africa - it's just so easy (and cheap) to experience wildlife here.

Alas, no Dwarf Mongooses. I want you to know that I scanned every termite mound hoping to see some little heads pop up. We did see some mystery mongooses on the trip, but you have to wait til I start posting about Queen Elizabeth NP to read about the main mongoose experience.
I actually saw more mammal species in Uganda than SA, and the exact same total of bird species. Together, and individually, both countries kick butt over anywhere else I've ever been.