Our long day started well before dawn as we ate breakfast by flashlight, (torchlight) while being swarmed by clouds of lake flies. They covered our cereal and there were so many that we did'nt bother to remove them.

Once on the road to the Chimpanzee Research Station we got to see a Blotched, (Large-spotted) Genet cross the road in front of us. Our third genet for the trip.
We were very tempted to stop often to watch birds once the sun came up but we needed to reach our destination by 7:00am. 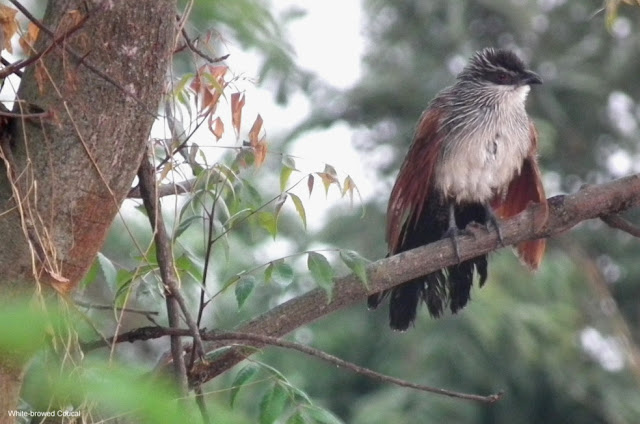 Some birds were too good to pass up. This White-browed Coucal was soaking wet because it rained hard just before dawn. 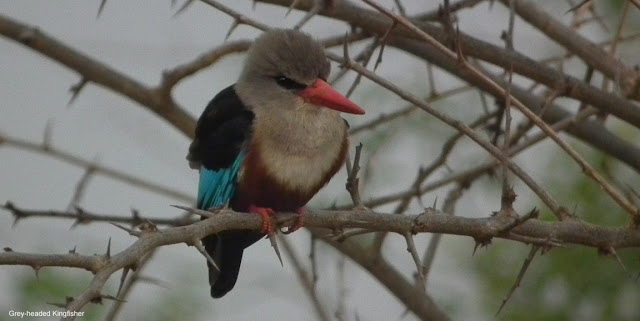 My fourth new species of kingfisher for the trip, The wonderful, Grey-headed Kingfisher. The other three were, African Pygmy, Striped, and Shining Blue Kingfisher. This is another kingfisher that does not associate with water or catch fish. 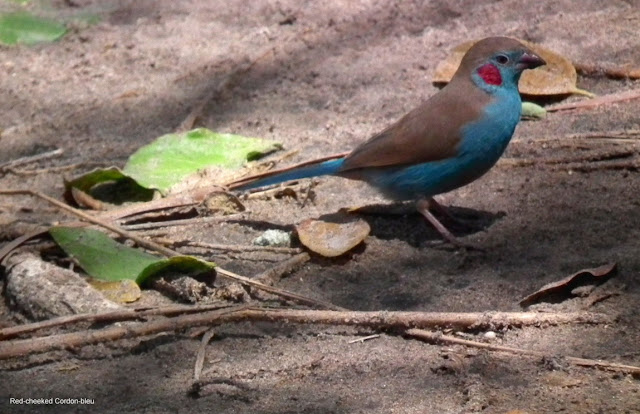 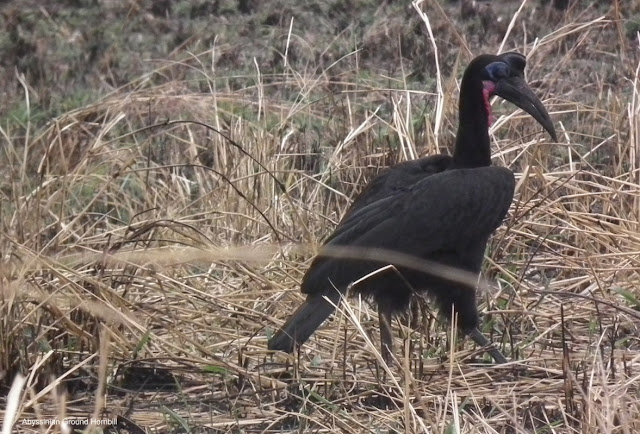 Toro-semliki was the first place where we saw the impressive Abyssinian Ground Hornbill. 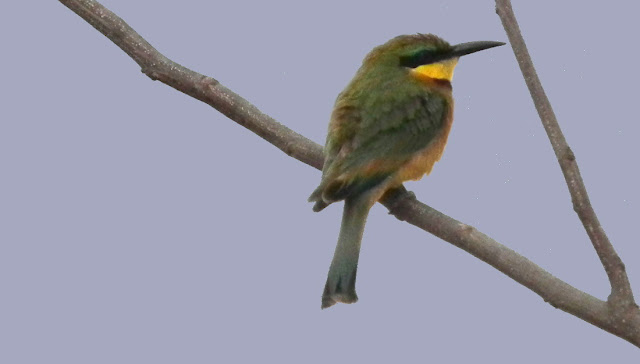 It was also where we first saw Little Bee-eaters on this trip. 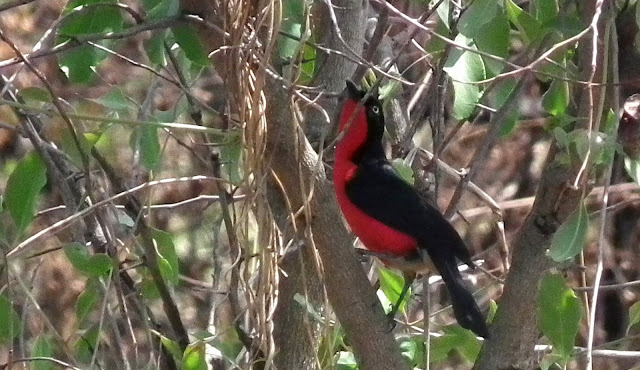 We had been seeing the very striking, Black-headed Gonoleks all along. They sing a very interesting duet where the male opens with a pleasant musical refrain and the female finishes it with a harsh retort. That's an assumtion on my part. It may be the female who starts the duet.

The sexes are similar and they prefer to hide in thick scrub. 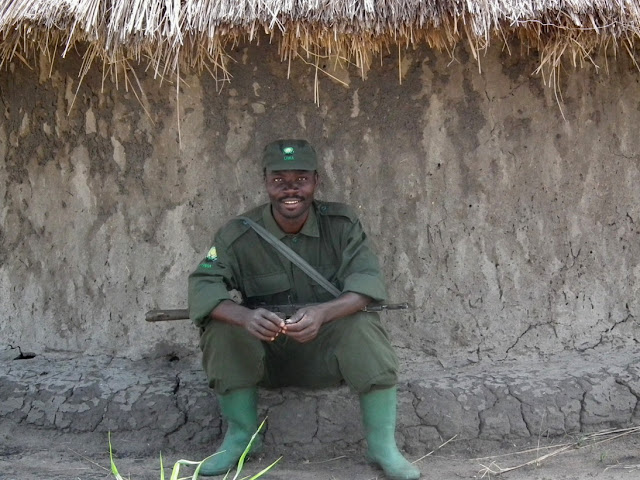 We finally made it to a ranger station and picked up our guide/ guard, Elimoshe in front of his banda. 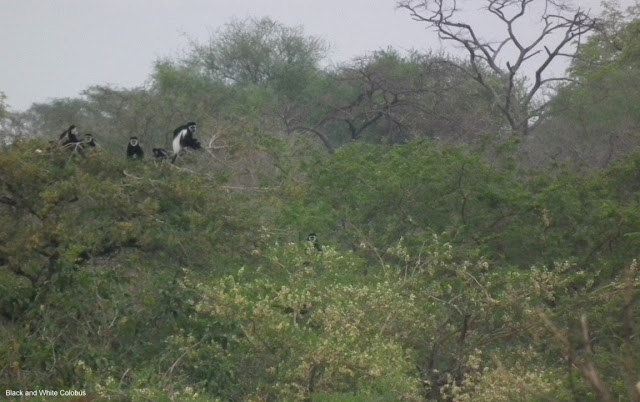 We still had several kilometers to drive before we reached the research station. There were some Black and White Colobus Monkeys nearby. 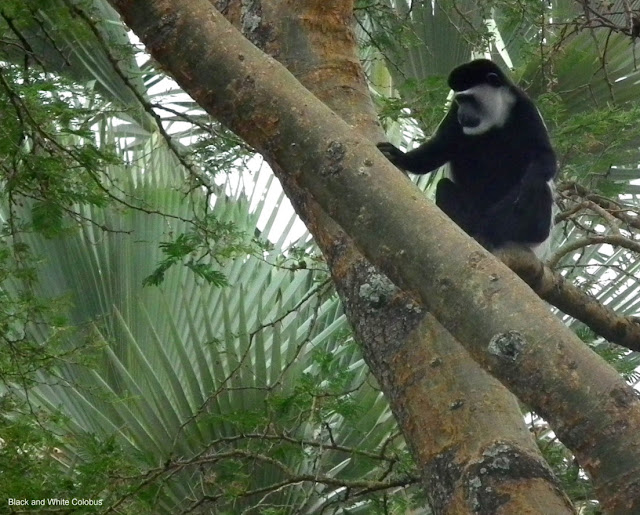 B&W Colobus tend to be slow moving leaf eaters that are a favorite prey item of Chimpanzees. The colobus can move at lightening speed when they have to. 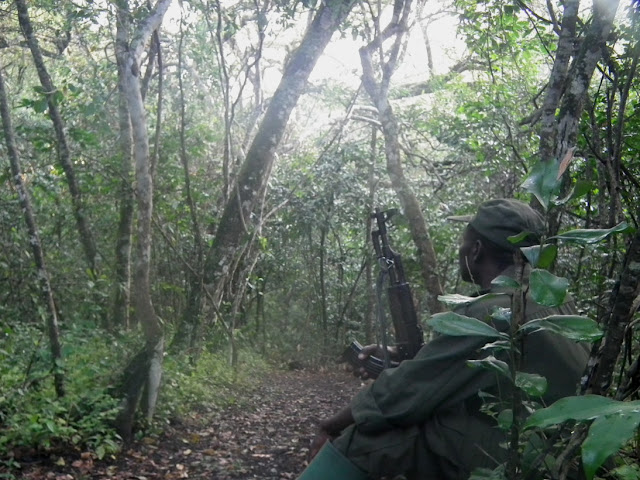 After we arrived at the research station, which is operated and funded by an American ivy league university, I forget which one, we entered a thickly forested ravine behind it. Elimoshe explained that we would need to walk anywhere between one, and eight kilometers before we would find the chimps.
The trail was steep and muddy, but we were in luck and heard chimps calling in the distance. We crept along slowly and silently, stopping often to look and listen.
After 15 or 20 minutes Elimoshe motioned for us to stop and crouch down. Then he pointed up into a tree nearby. I could see nothing in the thick foliage. We sat down and eventually I started to make out some dark shapes only about 30 feet, (10 meters) away. 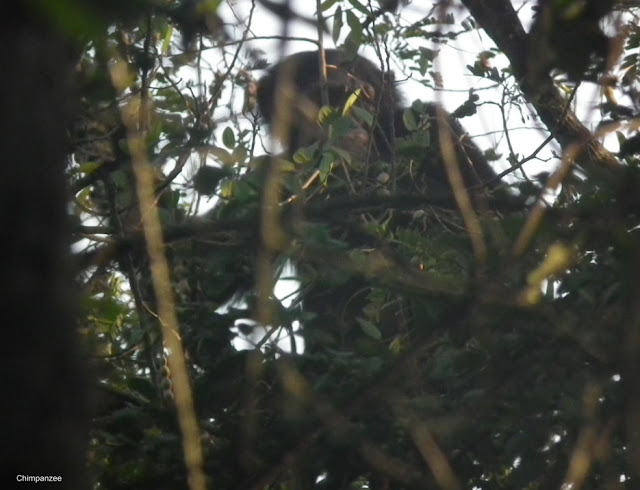 The Chimpanzees were silently watching us. I was impressed by how big they were. They were very close to us. 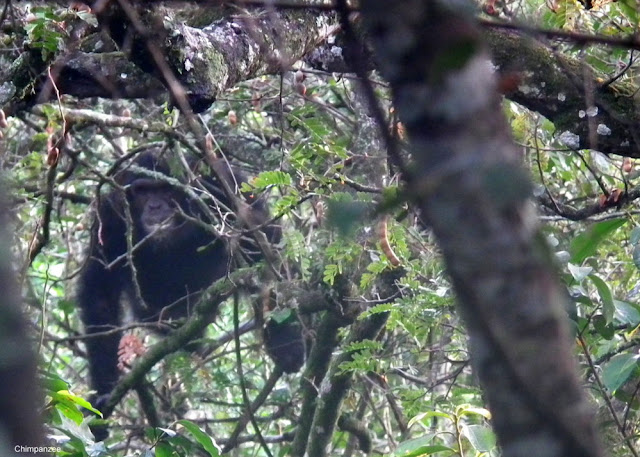 There were three chimps in all. Eventually they relaxed and returned to their search for small fruits in the tree. We watched them for about an hour but the chimps kept well hidden behind branches for most of the time. Occasionally one of them would peek out at us. 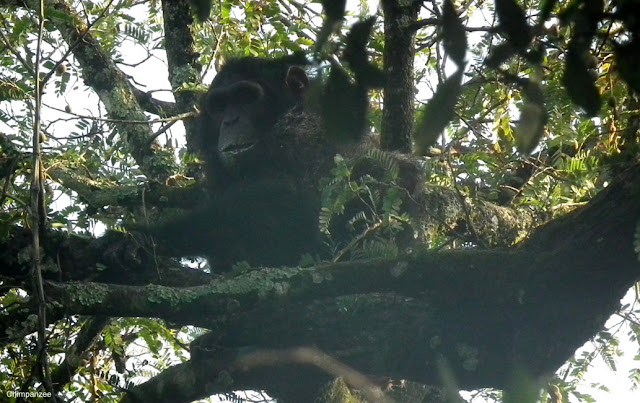 One of the chimps was a big male. When he decided to move on to a new tree, he became agitated with our presense. He started shouting and snapping off limbs, some of which were about three inches in diameter. He was so close to us and so strong. Elimoshe was visibly nervous.
All three chimps left the tree and moved away without incident. I was relieved. It was quite an experience.
Posted by john at 5:24 PM

John - I love following your blog! Your pictures are amazing and I love to hear about your adventures!! Thanks so much for continuing to share them :)