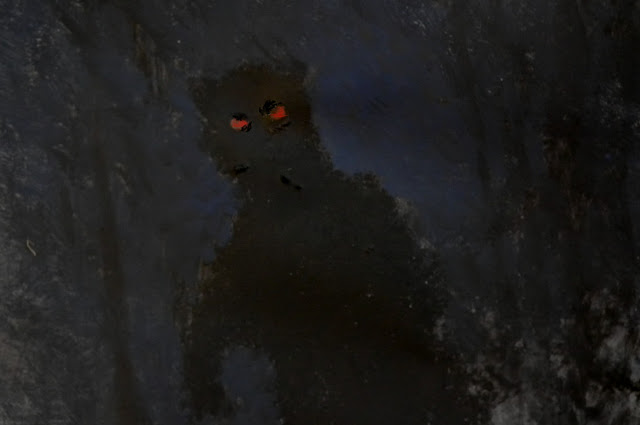 Some time ago, back in the early sixties, near the isolated town of Greer, Arizona, there were some strange occurances. Greer is a one horse town in the White Mountains of eastern Arizona, located deep inside the largest Ponderosa Pine forest in the USA.
The area is prone to some serious forest fires. There was a tragic accident where a smoke jumper was sucked into the heart of the fire. His body was never recovered. The man had been a decorated paratrooper from the D-day invasion in WWII.
A year or so later a ranch hand was working for one of the cattle operations a few miles outside of Greer. On Saturday nights, he and his fellow cowboys would head for the Wagon Wheel Lounge in Greer for a couple of beers. One Saturday evening he was delayed by some problem with a corral and he got left behind by his companions.
When he was finished with his chores he decided to walk into town. He grabbed a flashlight and set off at a quick pace. Soon he became aware of the sound of footsteps in the forest behind him. He stopped to listen. The sound stopped. He shined his flashlight into the forest, nothing. Then the sound of footsteps started up again as soon as he started walking. He was sure it must be a bear.
He repeated the process of stopping to listen, and shining his light all around, still nothing. The footfalls were getting closer and closer. He started walking faster and faster. He was on the outskirts of town when he stopped and shined the flashlight behind him. There it was, a dark figure with eyes shining red in the flashlight beam. It had the look of a severely disfigured man, with crispy black skin. Savage looking claws protruded from twisted hands.
That was it, he panicked and ran for it. It chased him and got closer and closer. As he reached the door of the Wagon Wheel, the creature ripped open the flesh of his back with it's huge claws. He staggered inside and the creature ran off. Thus the legend of the Demolish Man was born.
This was the story that was told to me on my first Boy Scout campout when I was twelve years old. I huddled in my sleeping bag in terror, acutely listening to every little rustle on that night, and many other campouts afterward. The Demolish Man was out there somewhere.
The fear of the dark, and of the supernatural, added first stark terror to my young imagination, and later morphed into a delicious apprehension on campouts as I grew older. It still adds some mystical spice to the camping experience to this day. 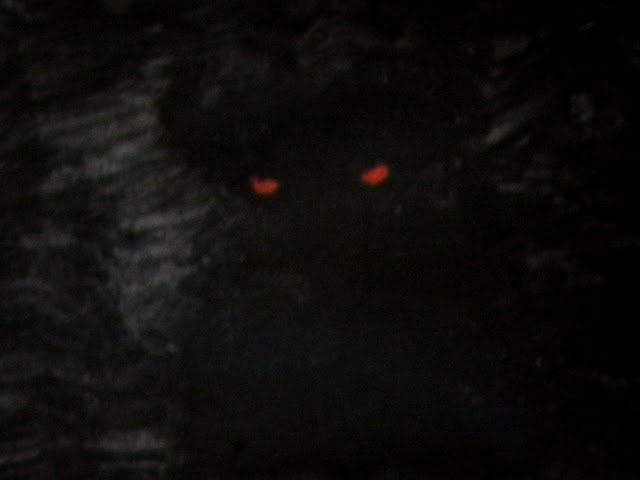 Fast forward from my Boyscout days to my mid twenties. I moved to Lakeside, Arizona, not too far from Greer. I had a friend from my youth who became a police officer in Mesa, a suburb of Phoenix, Arizona, 200 miles from Lakeside. In those days I often traded my paintings for guns because it was easier to sell guns than paintings. Gun owners would not part with hard earned cash for a painting, but they would happily trade guns for them. So I had a Ruger .357 magnum that made me feel like Dirty Harry.
Jeff called me up to tell me that he found a Coral Snake in the Mesa Police Department's parking lot. He scooped it into a jar and called to see if I wanted it. I wanted to photograph it so I drove down out of the White Mountains, into the desert. I brought my gun in case Jeff and I decided to go shoot soda pop cans or whatever. 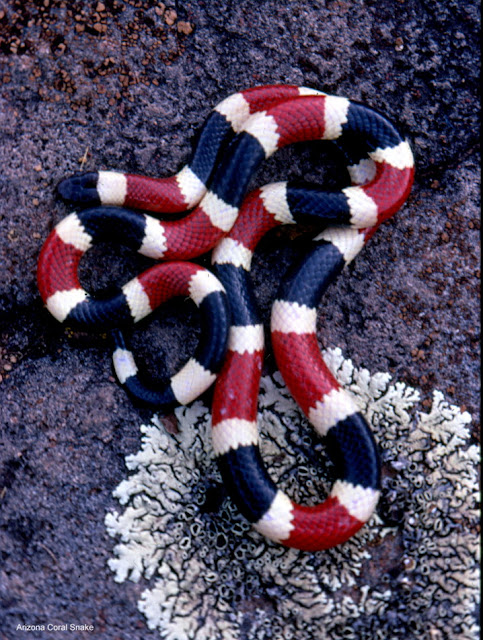 On the way back, my beat up old Chevy Nova kept stalling. The transmission was going out but I thought it was only vapour lock that would go away as soon as I got back up into the mountains. Every twenty miles or so, I had to stop to let the car cool down before I could go on.
It was still daylight when I left Mesa, but by 2:00am I was only into the long stretch of winding and mountainous desert highway between Globe and the infamous Salt River Canyon. There was virtually no other traffic on the road.
I was pulled over, lying across the warm car hood and looking up at the bright constellations in the pristine sky. Then I heard something big moving throught the desert scrub a few hundred feet away. I grabbed my flashlight, but the brush was too thick and I could see nothing. It came closer and I retrieved my loaded gun out of the glove box. Just a precaution. It could be a bear or a Mountain Lion. Even Jaguars are occasionally found in Arizona's wilderness.
As it got closer I shined my flashlight, I could see a pair of large red eyes way back in the vegetation. It was there, it was big, and it was real. My hands were literally shaking in fear. Was it a dangerous animal? The Demolish Man even came to mind but I dismissed that thought. Should I shoot? No, I should wait to see if it was going to charge. Then I thought that if I waited til it charged, then it might be too late to stop it.
I aimed my gun with one hand, and shined the flashlight with the other. I stood in indecision until I heard a loud MOOOO!
What a relief. I was so glad that I did'nt shoot an innocent cow. 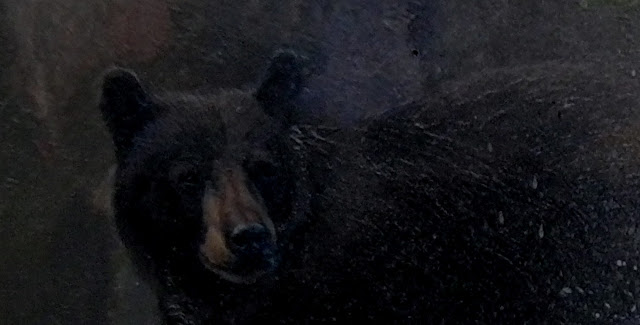 Flash forward to my first Summer in Alaska. I climbed the dominate peak above my home in Eagle River. It has the unique name of Mount Baldy, ( I think every town has a Mount Baldy)
On the was down I decided to take an alternate route through some dense stands of Alder. There was a narrow dirt track leading through the Alders. The vegetation was so thick it was like a solid wall. Soon I heard footsteps inside the thick trees, just like the Demolish Man story.
Since it was broad daylight, I was thinking Moose or Bear, not Demolish Man. It followed me. When I stopped, it stopped. I stuck my head into the wall of vegetation but it was too thick and dark to see anything. I walked faster. It kept pace for awhile but gradually fell back.
After a few hundred yards I saw a gap in the Alders. I stepped off the track and waited in the open to see what was following me. I had no gun with me this time, but I was far less nervous. I had my camera at the ready and I could see the vegetation moving as a large creature pushed through it, coming closer to me.
When it got to the edge of the gap, it stopped just out of sight. It certainly knew that I was there.
I waited, but there was no movement. My patience ran out, and so I went on my way. I never saw the animal, but I know it was my first bear encounter in Alaska. It's funny, but not seeing it gave me a bigger thrill than I have gotten on the occasions when i did see the bear.
Posted by john at 5:32 PM

Holly crap John, your story scared the bejesus out of me! I can just imagine how you and the other scouts must have been terrified but even more so on your numerous nightly adventures as an adult. You are a great story teller!