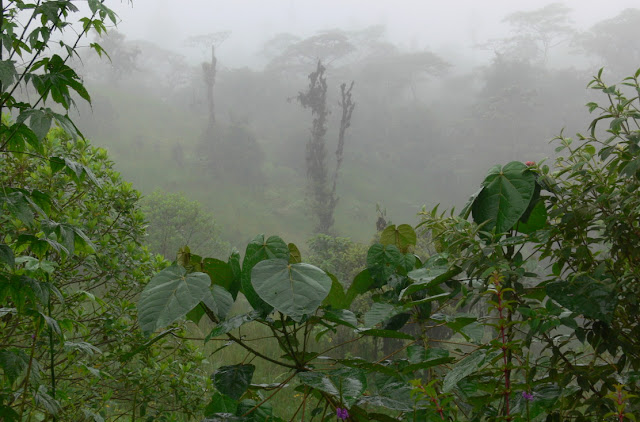 The heart of the kingdom of the diminutive Glitter Fairies, (faeries if you like) lies deep in the mysterious cloud forest on the western slope of the Andes Mountains in Ecuador. 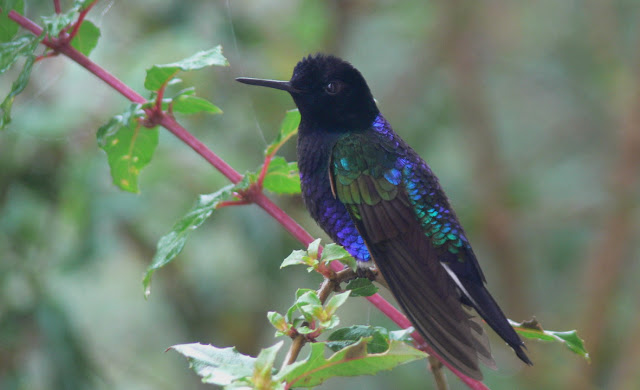 There are many different kinds of these colorful fairies. they have delightful names like, Velvet Purple Coronet. 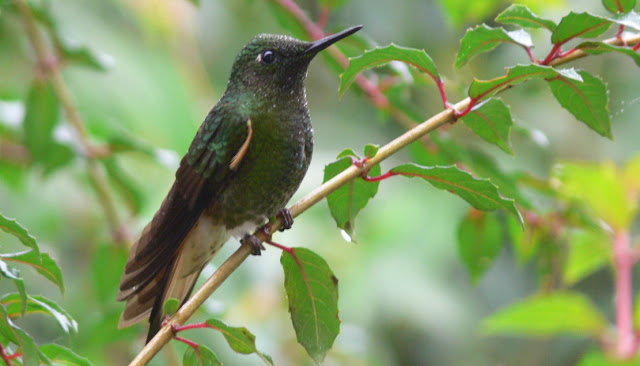 A close relative that lives in the same misty realm and can be found alongside it's more colorful, and much rarer cousin above. This is the buff-tailed Coronet. 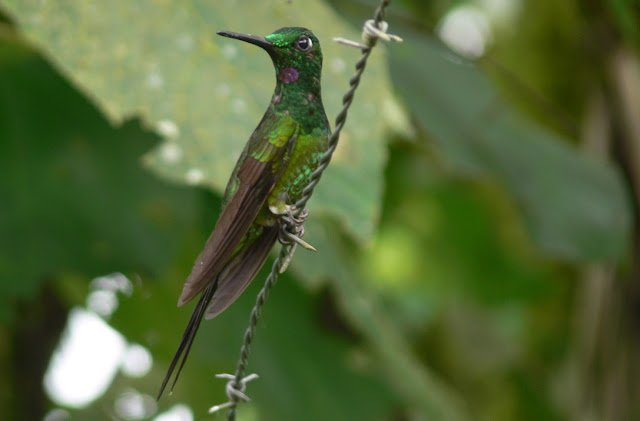 The regally named, Empress Brilliant has bright colors that show best in direct sunlight. Unfortunately sunshine is usually a rare commodity in the cloud forest. 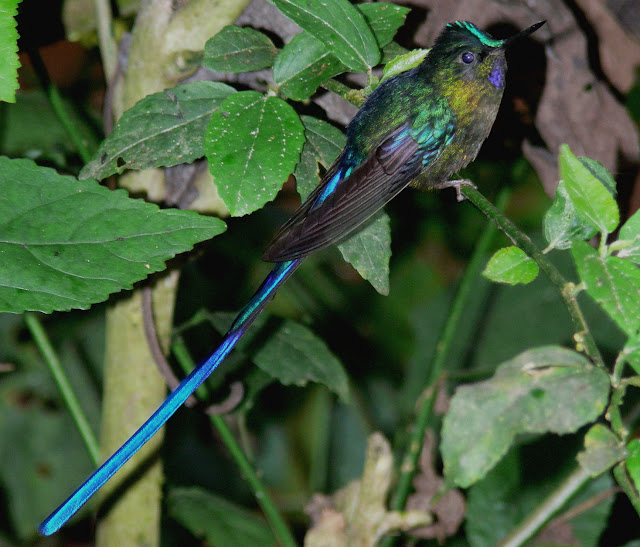 The Violet-tailed Sylph has an even longer tail than the Empress brilliant. This one is potentially dangerous to humans. It can take your breath away.

The tiny, Western Emerald has colors that change when viewed from different angles. As do most Glitter Fairies. 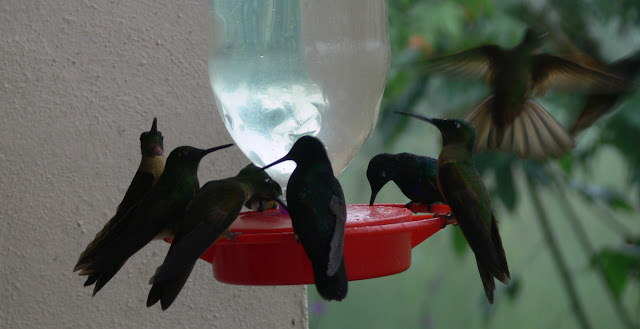 Of course these Glitter Fairies are better known as hummingbirds. I have written about these before but I have never posted these particular photos. All of these photos were shot in the area of Mindo, which is the epicenter of hummingbird distribution, and one of the top birding destinations in the world.
This hummingbird feeder was hanging in the porch outside my room at Las Gralarias. These are Buff-tailed Coronets. 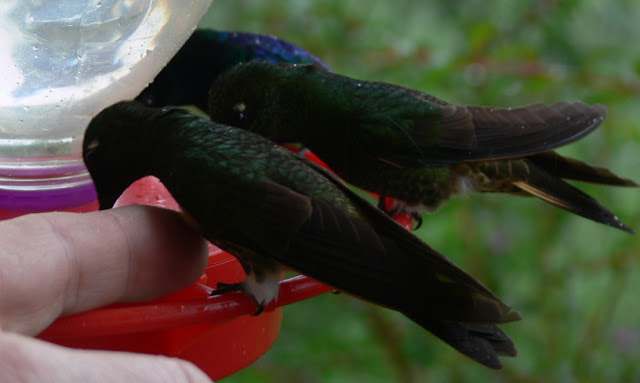 Too bad these birds are so shy around people. 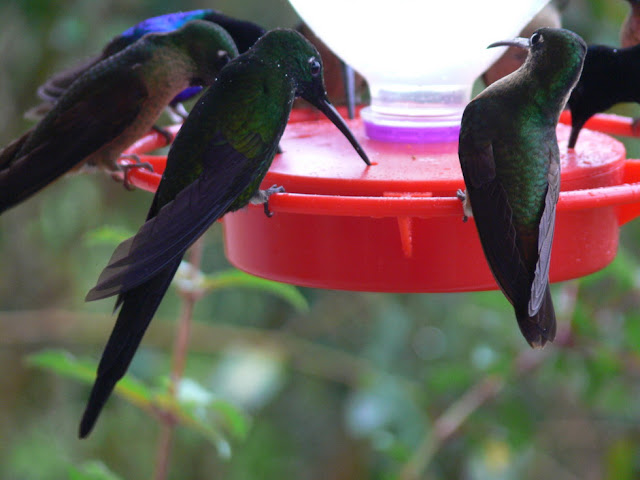 An Empress brilliant forces the coronets to make room at the feeder. 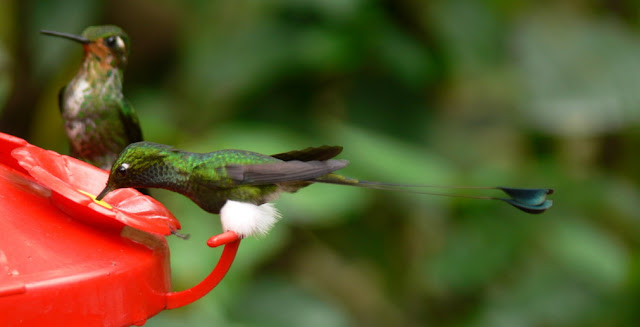 One of the coolest hummingbirds is this, Booted Racket-tail. It is tiny. I'm not sure what the hummingbird in the background is. 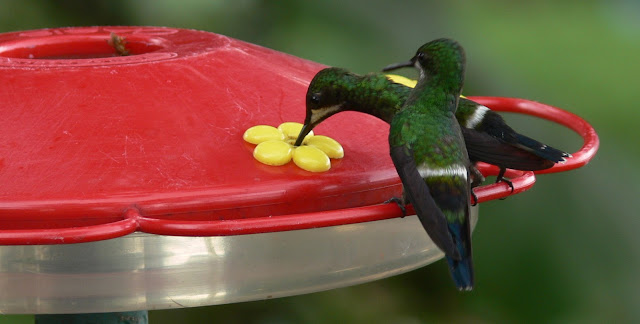 The Collared Inca is more colorful than it's cousin, the Brown Inca. Some of the many other species of hummingbirds that can be seen in the cloud forests of the western slope of the Ecuadorian Andes are as follows. You gotta love these wild names.
Gorgeted Sunangel
Sparkling Violet-ear
Brown Violet-ear
Green Violet-ear
Green-crowned Brilliant
Fawn-breasted brilliant
Green-crowned Woodnymph
Tawny-bellied Hermit
White-whiskered Hermit
Purple-throated Woodstar
Purple-bibbed Whitetip
Speckled Hummingbird
Andean Emerald
White-necked Jacobin
Rufous-tailed Hummingbird
There are many others that I did not see. All the more reason for me to return someday.

In these clouded rain forest its the place, where live the higuest diversity of these iridiscent and colored birds.