Building Upon Ideas For Paintings 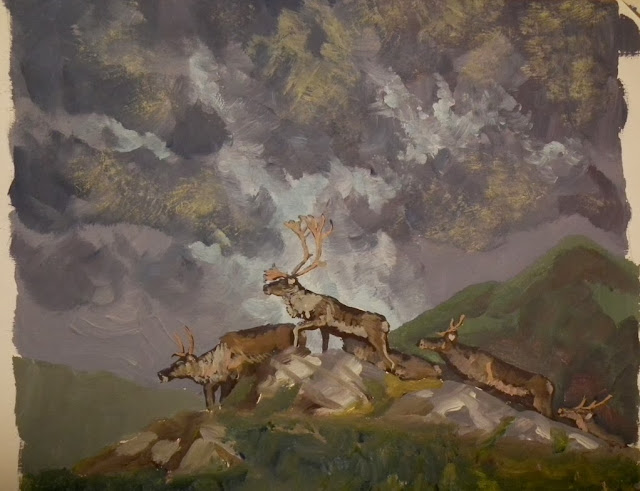 The sky in this rough study of Caribou reminds me of one of Cezanne's paintings; I forget the name of it, but it was a landscape dominated by a big mountain in France.. This study was inspired by a looming thunderstorm that I observed in Eagle River several years ago. At the rime I was noticing that there were greenish tones within the purple clouds.
In the past I used to make many studies for possible paintings. Over time my enthusiasm has waned and I have gotten lazy. Now I usually just work out a painting directly on the final surface. This idea for a Caribou painting is perfectly fine. I do not know why I have never tried to do a refined version of it. 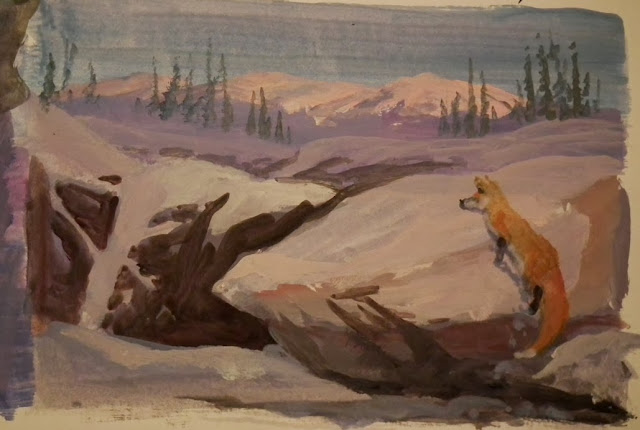 Many things used to spark ideas for paintings like seeing alpenglow turning snow into a pleasing shade of pink. When I would come up with a mental image such as this, I would rush to duplicate it on any available scrap of paper. I never painted a finalized version of this one either. 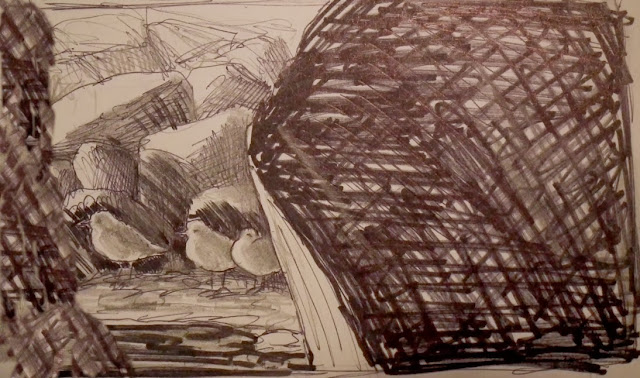 This black and white sketch was made using a pencil, a ball point pen, and a Sharpie. I like the perspective and I hope that one day I get around to painting it. All of these little studies were dome some years ago: I stuck them in a box and forgot about them. A few days ago I stumbled upon them. There were hundreds more sketches like this that have been thrown out over time. 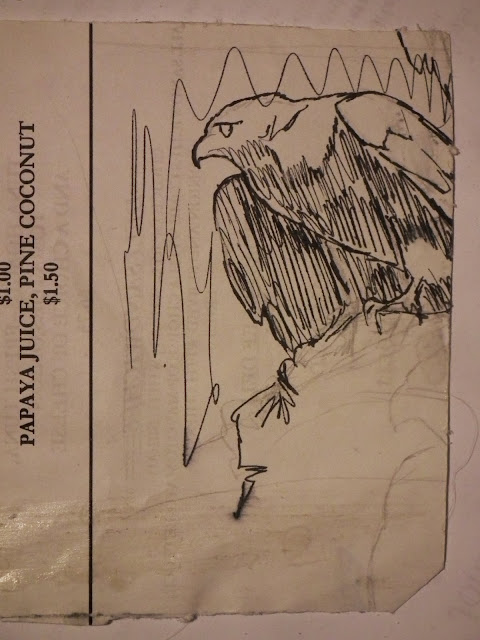 This quick raptor doodle was done on the menu of a take-out restaurant. 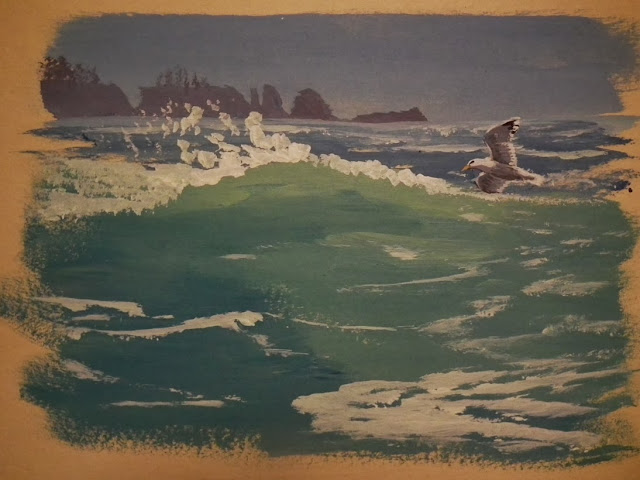 I had the urge to do a seascape of some sort. 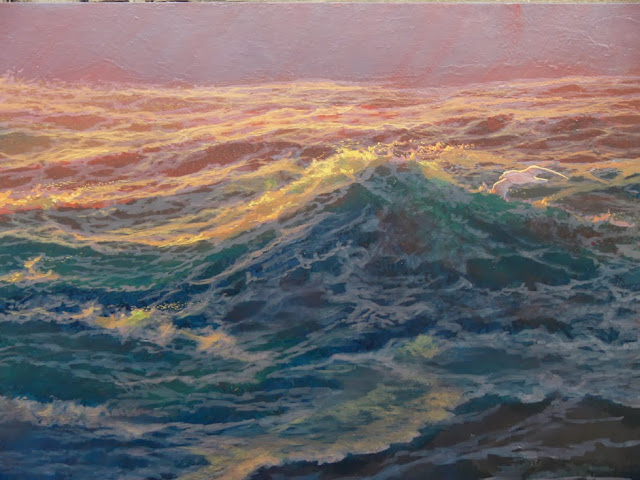 I found out that seascapes are not so easy to paint. this one got recycled. It could have been reworked but I did not have the patience. 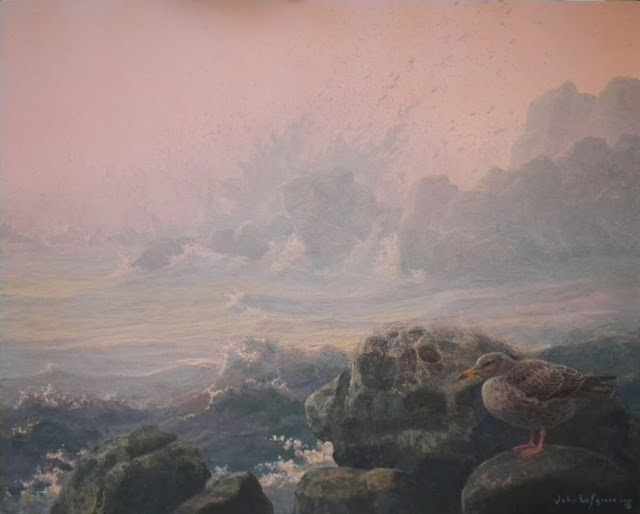 Another version that went away also. There was a third version that came out fairly well. I gave that one away before I ever photographed it. 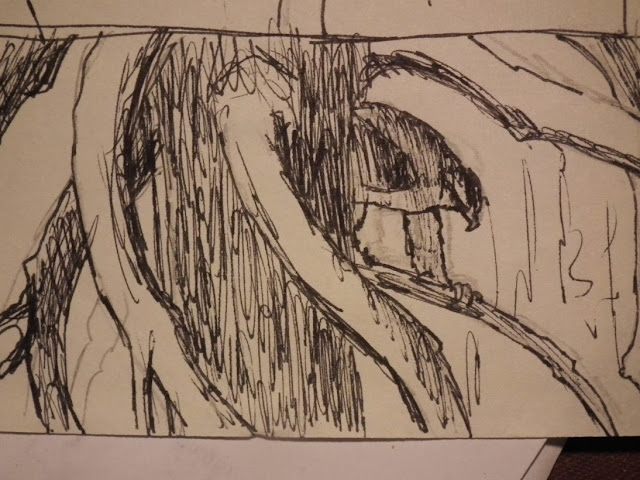 I had an idea for a Goshawk in an old snag. There were many variations on this theme. 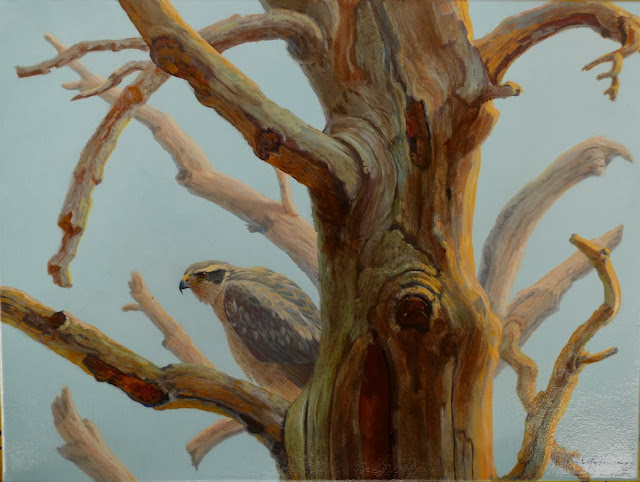 The version that eventually got painted is called, Grandfather Tree. It is an 18x24" canvas. Unfortunately it got a hole poked through the canvas. It can be repaired but it lessens the value of the painting. I should do one more variation on this theme with more background. 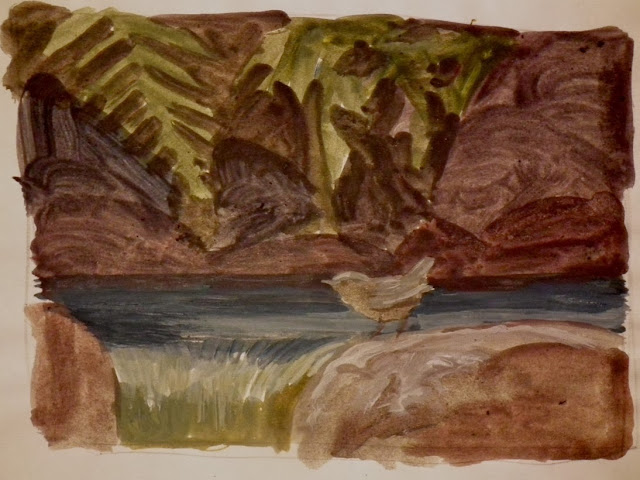 What inspired this idea was the miniature waterfall between the two foreground rocks. The Dipper is more of an accent to compliment the setting. 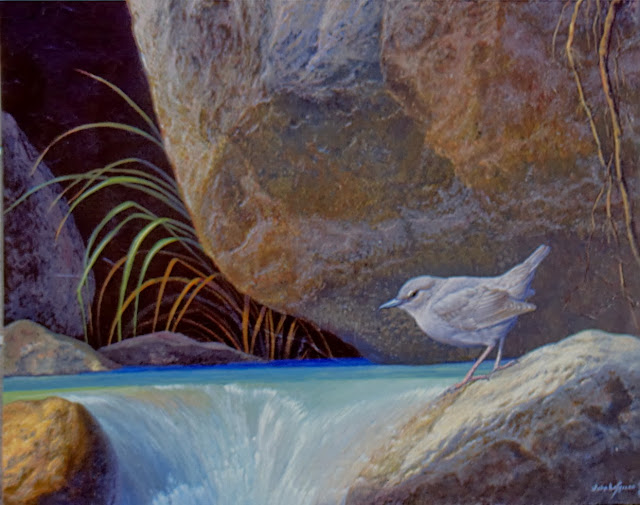 The completed version was slightly surreal but it sold easily. The photo of this 16x20' painting is also slightly askew, and washed out.
On the more recent artwork front, the Cougar painting that I have been working on for the past few weeks is progressing nicely. I think that it will be a good one.
Posted by john at 10:32 PM

I have had it in the back of my mind for about 3 years to do a dipper painting as they are such quirky wee swimming birds. It seems though that I cannot figure out which disc holds the "good" photos as when I started photographing birds I was keeping every snap, so I have much crap to wade through to find the image I want. Hopefully will find it this year, lol.

Tess, I look forward to seeing your Dipper painting when it is completed.

Love seeing all these smaller studies and paintings. I often feel that they tell us more about an artist and his (or her) work than a finished painting can - hope to see more. I especially love the atmosphere of the gull painting, one of your best I think.

Thanks for your comment Jeremy. As you can see, my little studies are so much rougher than yours. It has to do a lot with the struggle to clear out the mush that tends to clog my mind.

Bery nice to look you paintings and sketches John.The sea scape guive much posibilities for playing with his rich wather blue thones,i like the lights of the goshawk that pose on the three ; in terms of patience, for me, are the key tool for embolbing a pictures with a good result;lastly i finished the reconstruction of one specie of prehistoric giant moose that culd be the modern moose ancestor,"cervalces latifrons" i spent arround one month and twenty days for make it,thoguether with a little information research about his morfology.Much people tell me, tat they become crazy making this pictures.