I titled this post, expedition photos, because that sounds more important than vacation photos. Since I'm a wildlife artist, my vacation photos are not like everyone else's. No photos of myself standing in front of a sign. These photos are so late coming because I did'nt have a blog when I went to Peru last Jan. and Feb. I went to Lima, Cusco, Macchu Pichu, Nazca, Paracas, and two jungle lodges out of Iquitos. 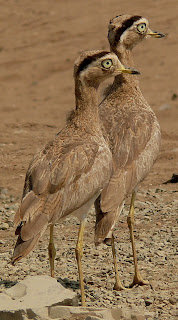 These are Peruvian Thick-knees that rose up from the barren desert, at Pachacamac, south of Lima. If they had not moved, I would have walked right past them. 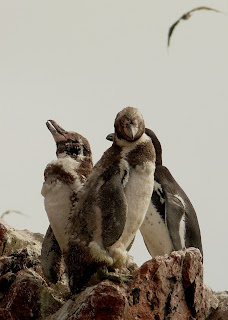 The highlight of the trip was my visit to Islas Ballestas, off the coast of Paracas Nat. Park. There were millions of seabirds, and sea lions. These Humboldt Penguins were going through their annual moult. 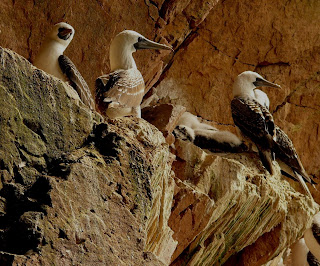 These are a few of many, many Peruvian Boobies on the dramatic cliffs of the islands. 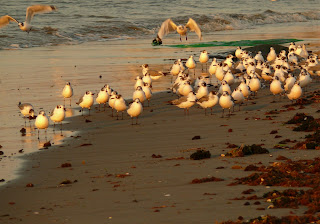 The mainland town near the islands is El Chaco, which is also a paradise for shorebirds. These are wintering Franklin's Gulls. 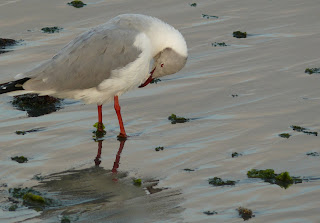 One of the South American Gulls is the Gray-hooded Gull. Others are Belcher's, Kelp, and Gray Gulls.
I did'nt expect to see Black-crowned Night Herons in Southern Peru, but they were common in El Chaco. The Gulls are Belcher's Gulls. 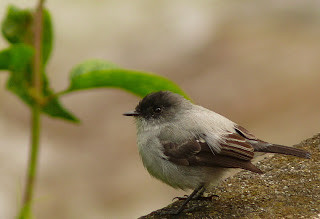 Aguascalientes is the small town where tourists stay when they visit Macchu Pichu. A common bird in town is the Torrent Tyrannulet. They are trusting around humans, and never stray far from water.
A common species in the Amazon Basin is the Wattled Jacana. This adult and baby are walking on Water Hyacinth, floating on top of the water. Below are a pair of Horned Screamers. Turkey sized birds, walking on the same Water Hyacinth. 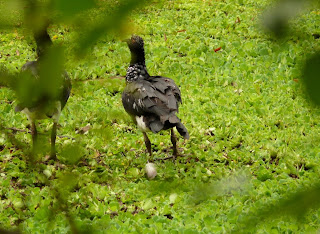 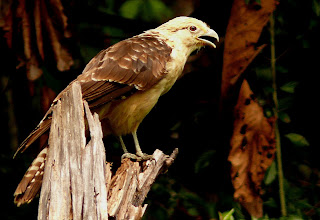 Around the rustic lodge where I stayed on the Cumaceba River, there were three Yellow-headed Cara caras. They were always ready to gobble up table scraps, thrown out by the kitchen staff 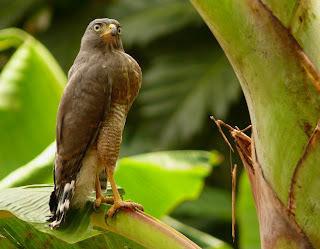 .This Roadside Hawk, out muscled the Cara caras to get a meal of fish guts. You can see it's very full crop. 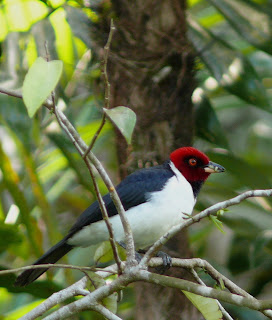 At another lodge on the Amazon River, there was a pair of nesting Red-capped Cardinals. They are similar to the Torrent Tyrannulets in the sense that they are trusting of humans, and they stick close to water. 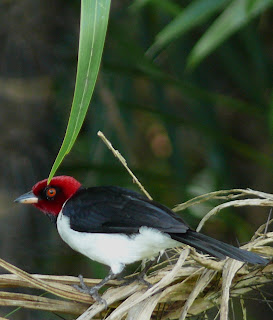 The Red and White Spinetail is a species that occurs exclusively on islands in the Amazon River. These are probably some of the few photographs of this species at it's nest. 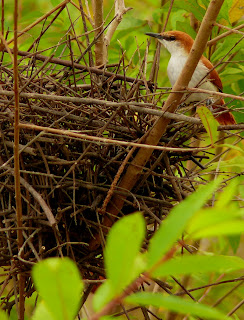 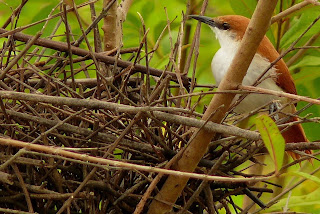 There are so many more photographs I want to include. Maybe later I'll add another post. Hopefully they wont all be bird photographs.
Posted by john at 2:24 PM