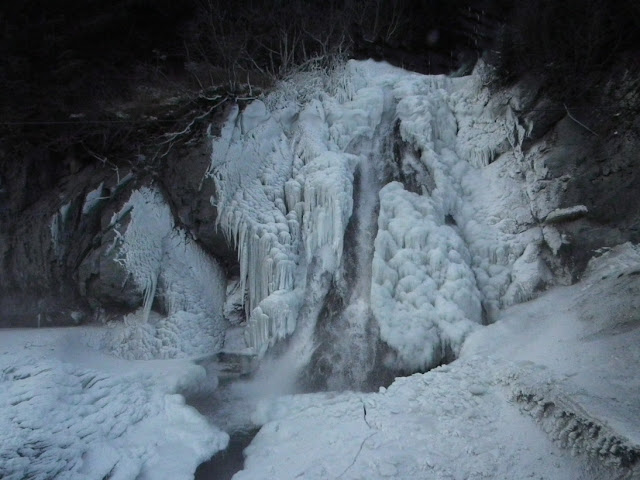 Although I wanted to drag this out a little longer, I'm impatient to finish my tale of the Redwing quest. Near the beginning of Lowell Point Road, just past the main part of town is the most reliable place in Seward to see dippers. This small waterfall is still flowing although it was mostly frozen. 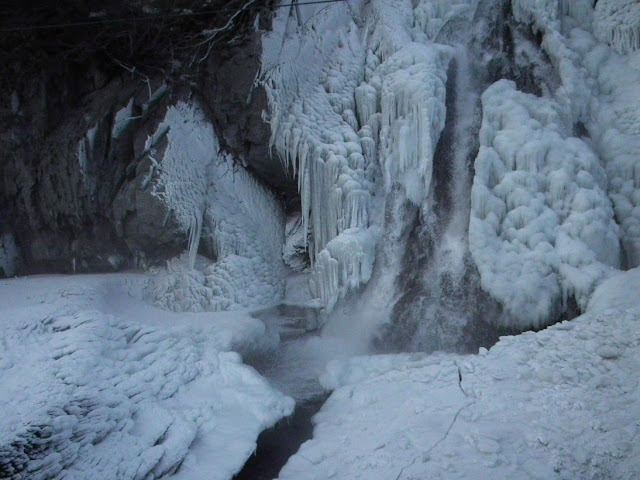 There were no dippers today. 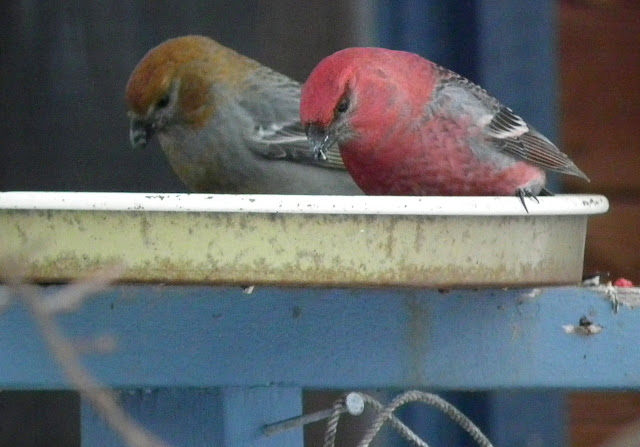 There are several people around Seward who put out sunflower seeds for winter birds, like this pair of Pine Grosbeaks. 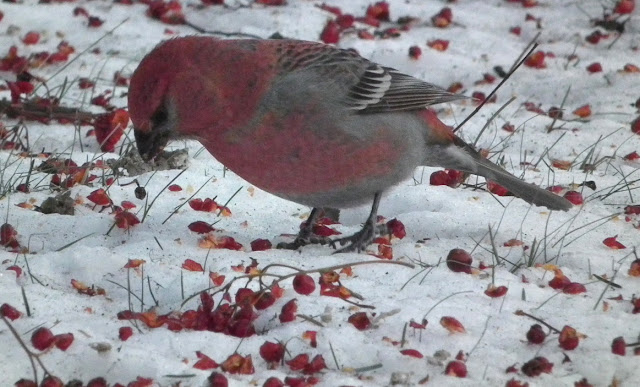 Several days before our trip to Seward, Alaska had a gigantic windstorm. Icy winds blew in from Siberia for days. That is what undoubtedly brought in the Redwing.
The wind also stripped Mountain ash Trees of their berries. Waxwings and Grosbeaks feasted on the fallen berries after the storm. 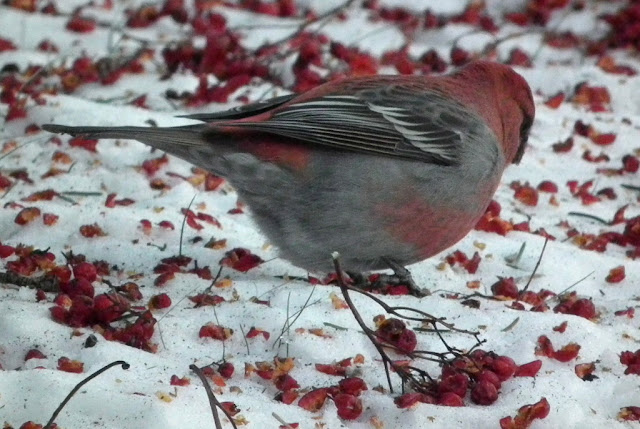 This was the best opportunity I've had to photograph Pine Grosbeaks and I really wanted to keep on taking photos of them. Both sets of my camera batteries were wearing down rapidly in the cold.  My first set of batteries died completely after this photo. I still had to find the Redwing. Not to mention the fact that my fingers were getting too numb to operate the camera, and I was shivering badly. 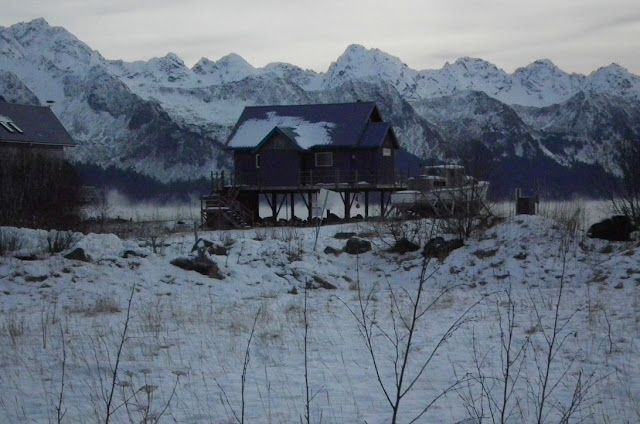 Finally we arrived at the end of the road. Above is the last house in Seward. I really wish that I lived in this house. No one was home when we were there. This is the area where the Redwing had been spotted for the previous four days. 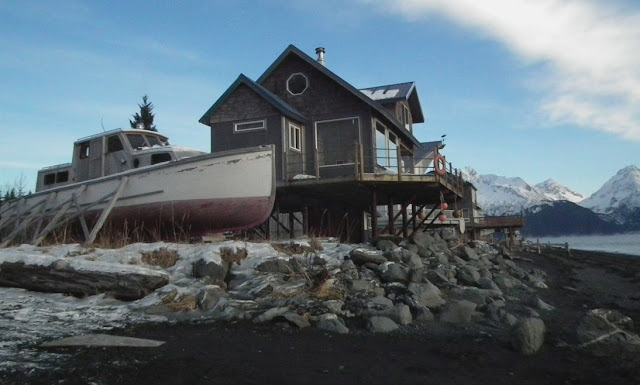 We saw nothing at first, but there were three other birders there. They said the Redwing had been on the other side of this house one minute before we arrived, but had flown down the beach. They said, "dont worry, it will be back soon". 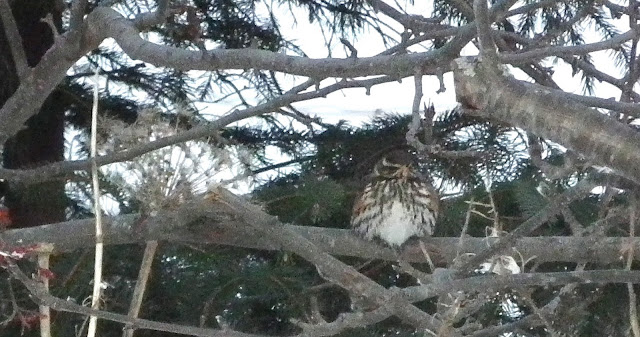 We did'nt have to wait for more than about five minutes. Good thing, it was really cold in the wind, even though it was only slightly windy. The Redwing came back because it found a small area beside the house where it was protected from the wind.
Redwings are a turdus thrush, related to Fieldfares, and American Robins. This bird had strayed more than 3000 miles from it's normal range, across some high mountain ranges, across the Kamchatka Peninsula, along the length of the Aleutians, and somehow it landed in Seward.
The bird was not spotted yesterday at all, but it has been easy to see for a week and a half before that. 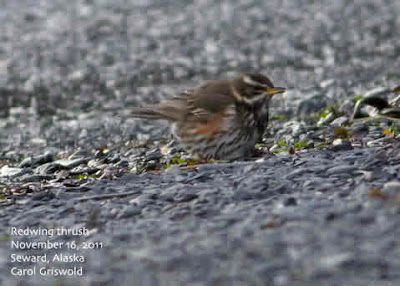 My photos of the bird leave much to be desired, but local Seward birder Carol Griswold got better photos, like this shot of the bird foraging on the beach. 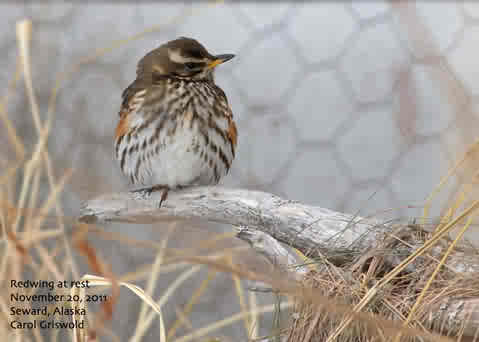 Carol was one of the first birders to see the bird. She braved the fiercest of the windstorm to help acertain the strange new bird's identity. The only other North American sightings of the bird were in Newfoundland, far Northeastern Canada. Thank you Carol for letting me use your photos.

The end of a very successful day. After a welcome, but expensive bowl of chili, we made the long drive home.
Posted by john at 4:17 PM

What an amazing place to photograph redwing. Know what you mean by that house.

Alas, the Redwing has not been seen for days now. The weather in Seward has improved lately, so maybe the bird moved on to greener pastures. I love reading your blog Robert.