The Kings are In 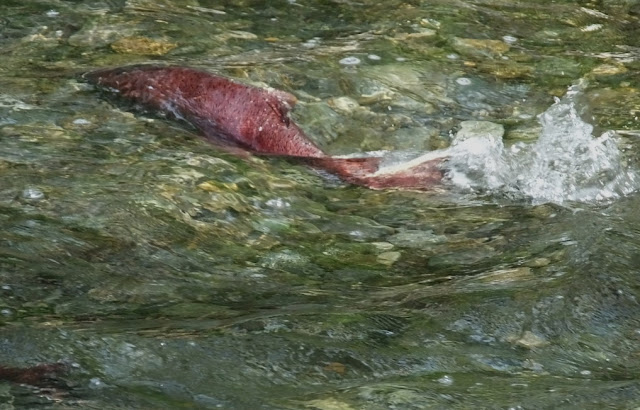 The title of this post is a much anticipated announcement commonly heard every summer around these parts. It refers to the arrival of Chinook Salmon to the local rivers and streams. 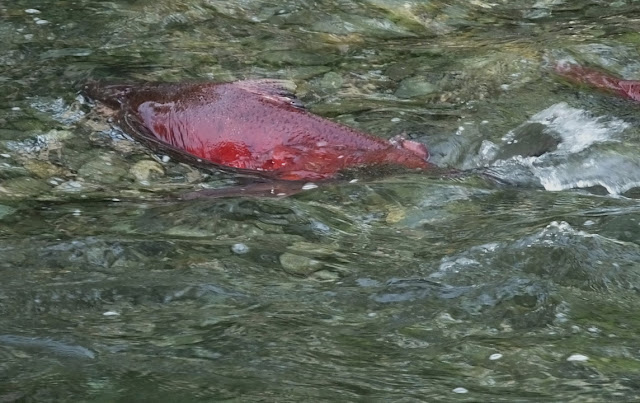 Chinooks, (King Salmon are the largest North American salmon. They often greatly exceed one meter, (yard) in length. They first started showing up in Ship Creek about a month ago but they were evident in great numbers last Friday. 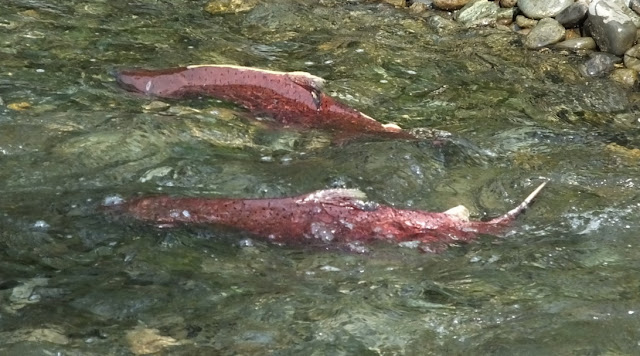 Some years they fail to appear in their traditional spawning grounds. Ship Creek experienced a bounty of fish this year. There were many hundreds of them on Friday. 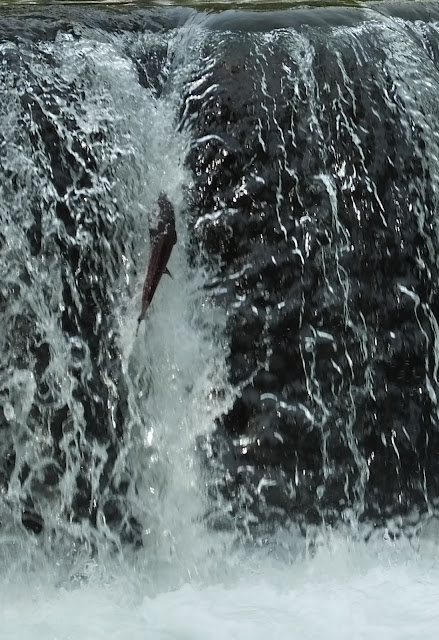 There were also smaller species like this Coho Salmon trying to make it over the artificial falls near the fish hatchery where I photographed dippers earlier this summer. 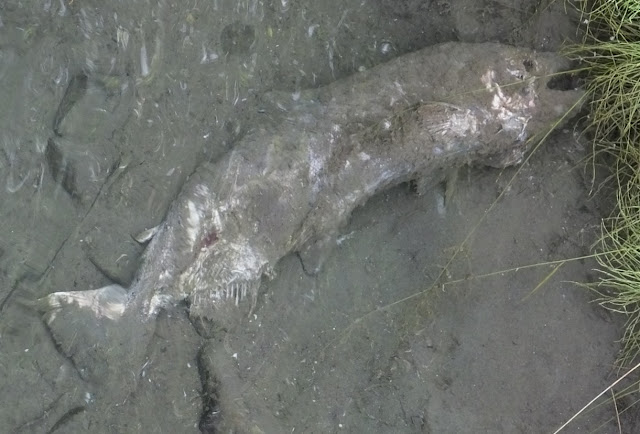 They show up, they spawn, they die, all in a few short weeks. There were no bears in evidence while we were there but I suspect that they show up in the wee hours. 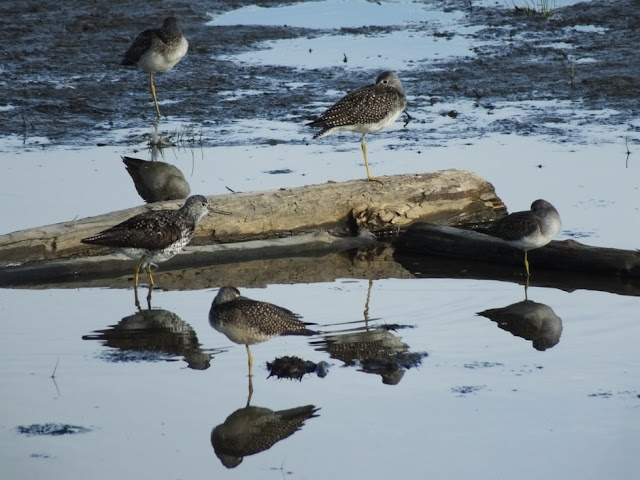 After Ship Creek we crossed town to visit Potter Marsh south of Anchorage. Lots of yellowlegs. 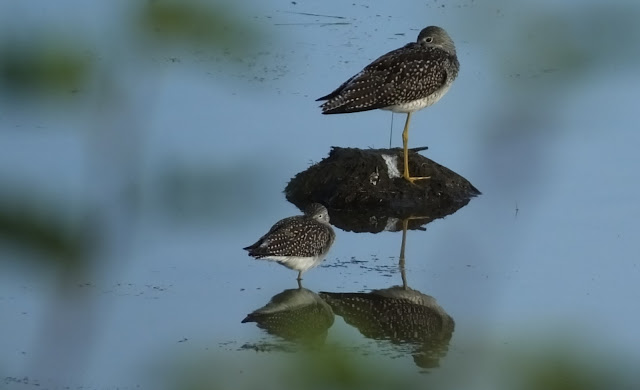 A size comparison between Greater and Lesser Yellowlegs. 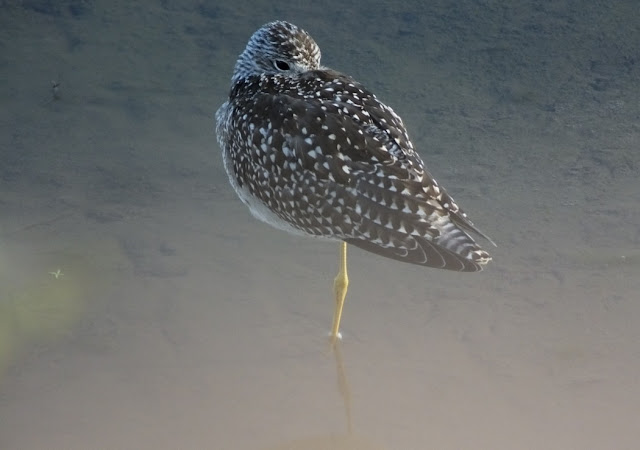 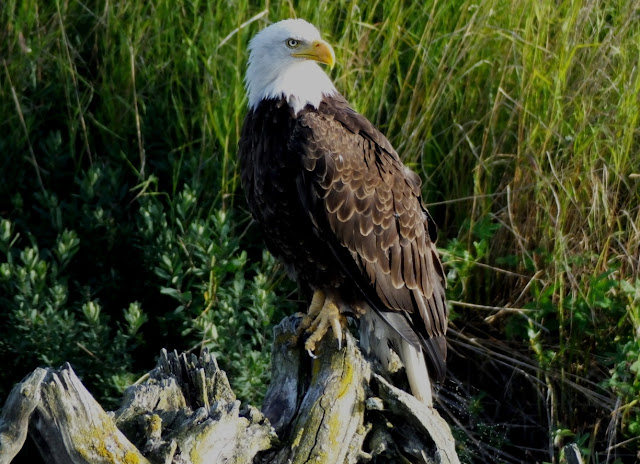 A Bald Eagle landed nearby. Too bad the light was so harsh. 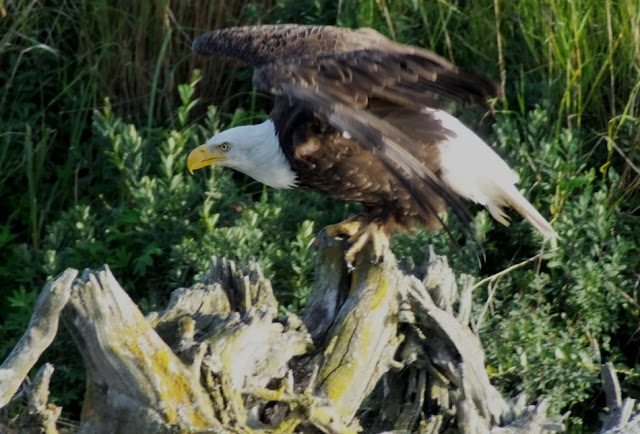 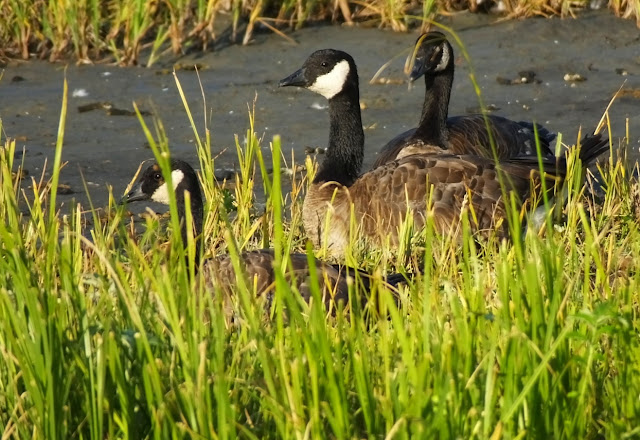 The eagle was chasing Canada Geese but had no luck. 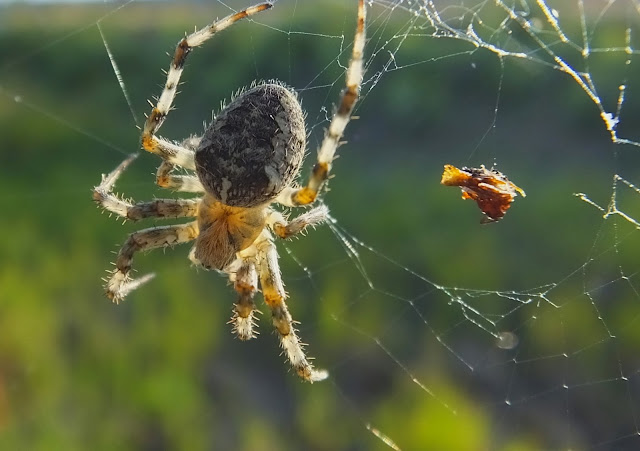 I am lucky to see one spider a year. Any idea what species this might be?
Posted by john at 7:08 PM

A great series of photos, must be quite exciting seeing all those salmon - especially love the shots of the yellowlegs.

Hi John! Thanks so much for taking the time to leave a comment on my blog. As promised, here's a comment on yours.

Seeing the spawning of the Chinook must be a really exciting thing to witness. Their red color is so beautiful. Thank you for documenting what you see around you with such beautiful photos, as many of us may never get a chance to visit Alaska, or have the familiarity with the seasonal cycles there as you do. There's something so different about seeing someone's personal account, rather than a bunch of glossy photos in a magazine.

Your bird photos are wonderful, too. Nice side-by-side shot of the greater and lesser yellowlegs. It is too bad that the light in the photo was harsh on the bald eagle, but on the other hand it would add some nice drama to a painting.

I don't know what species of spider that is, but it looks very much like one that is hanging out on a deck chair on our porch. I think it feeds on the insects that are attracted to our porch light at night. Really beautiful!

I don't have a "Guide to Alaskan Spiders" I'm afraid, so can't help. Wouldn't want to disturb this one, though.

Good news that the King Salmon are around in numbers.

Thanks Jeremy, Gabrielle, and John. I do not even know whether there is a guide to Alaska spiders. I just know that they are few and far between up this far North.