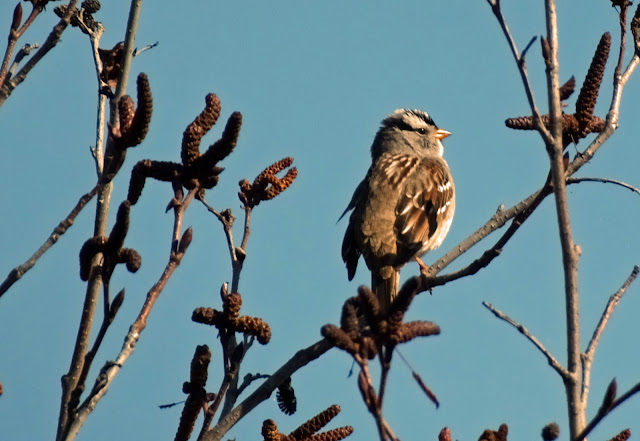 The migrants are pouring into Anchorage right now. Some are just passing through, most of them are here to breed. The air is filled with the songs of White-crowned Sparrows and warblers. 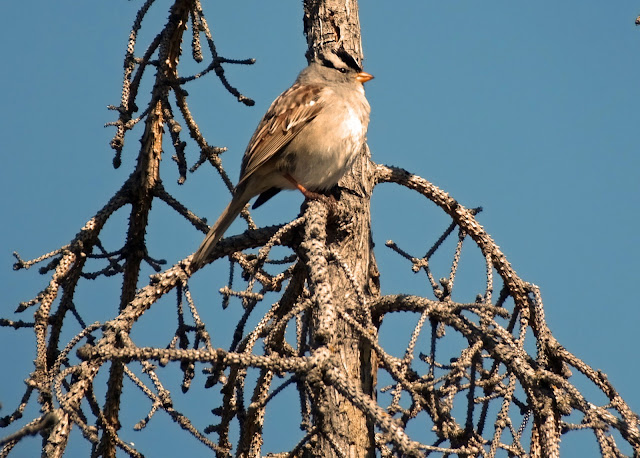 They sit proudly in trees and bushes. 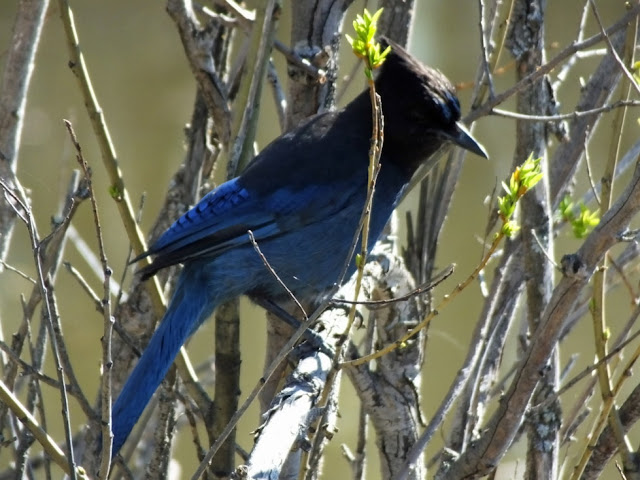 Steller's Jays stay all year but are much more conspicuous in the Summer months. 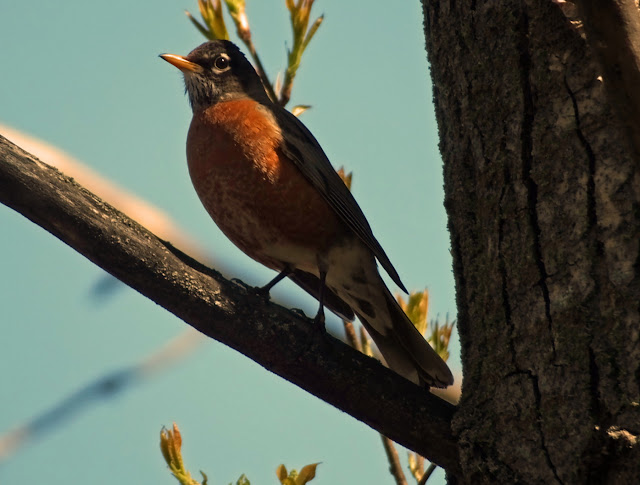 The same is largely true of Robins although they are scarce in the Winter. 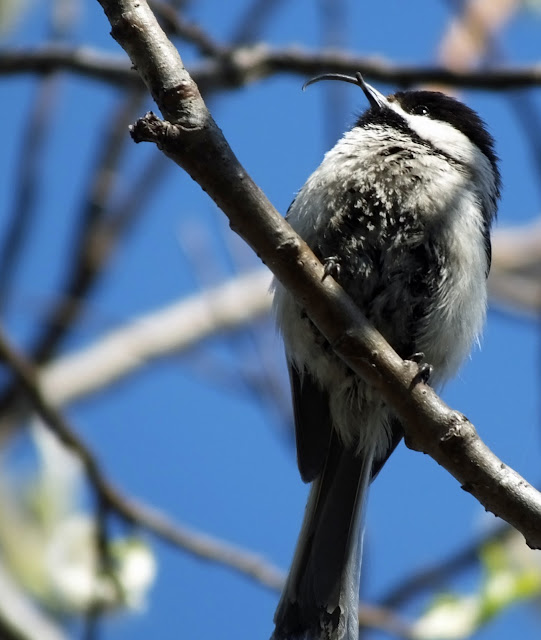 Anchorage has lots of Black-capped Chickadees. What is irregular about this individual is obvious, the deformed beak. Anchorage has the dubious distinction of having more birds with deformed beaks than anyplace else.
A great deal of research is being done to figure out why. Black-capped Chickadees and Northwestern Crows seem to be the species most affected but several other species also show deformed beaks.
Researchers lean toward a genetic, rather than an environmental cause. It remains a mystery 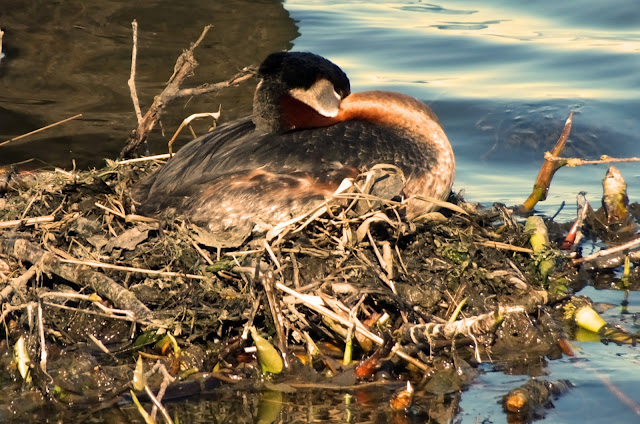 Red-necked Grebes are on the nest wherever there is water. 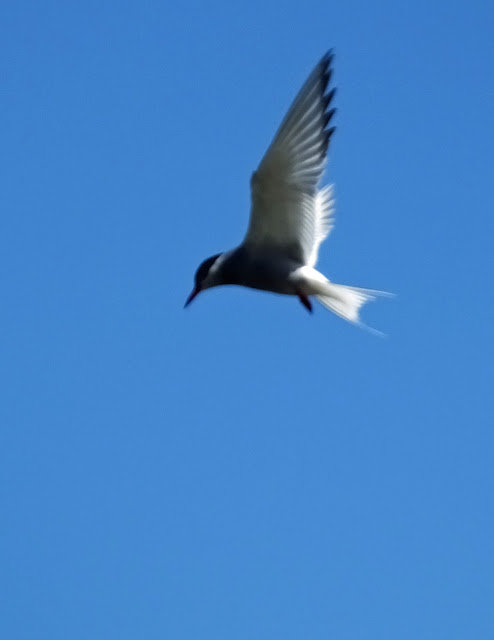 Arctic Terns are back in town. 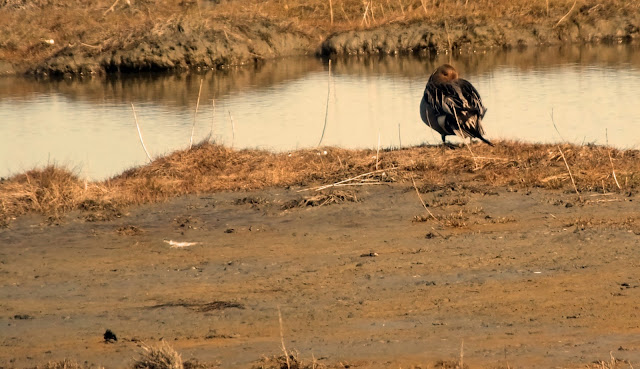 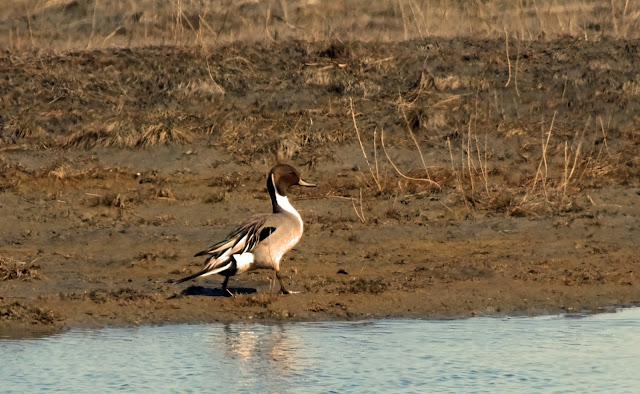 They are a beautiful duck. 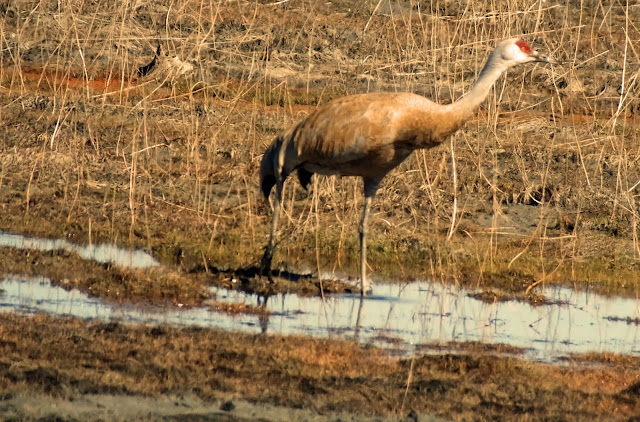 I was delighted to see Sandhill Cranes along the coastal trail. 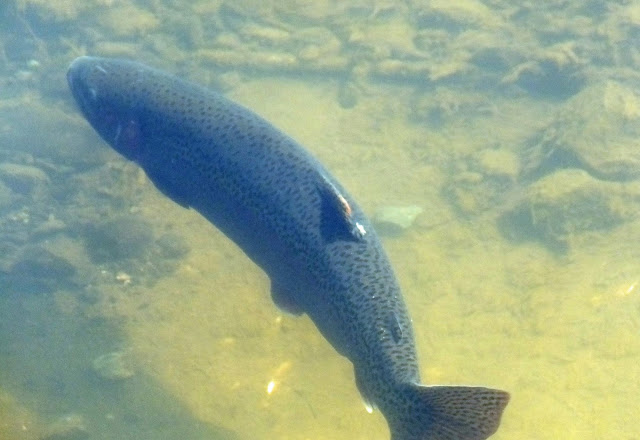 Even the fish are back. I think this is a large Rainbow Trout because it is too early for salmon.
Posted by john at 2:38 PM

Also love this time of year here. We've had a few new visitors that we hadn't seen here before including a snipe that has been hanging out and a yellow-rumped warbler.

Now that we have moved 400 yards off the water instead of along it we don't see sea birds any more from home. But we have six deer, three of them yearlings that came all winter and an otter dropped by in the creek.

The grouse hooting was constant all spring and last fall the number of flickers was amazing, but given the number of bark beetles we have in some of the dead standing trees on the place we know why they come!

A bear came through last fall though we haven't seen him. There are a number of brown bears about too.

Now that we've run off the neighbors cat a few times the jays are a bit safer.

We've been glad to see the chickadees and junkos again too since they never made it by our last place (which is less than 10 miles North as the crows in the East fly). Funny to see the great difference in species here vs. there though we are up off the water and out of town now.

Good to hear from you. You get a lot more birds in Southeast Alaska than we get in Anchorage.

I like seeing a lot of the birds that you post. Some of them remind me of my time up there. This place is so different than the interior but not so unlike South Central. We don't get out much so we don't really even see most of our island let alone different environments. Some day I really want to travel upriver on the Stikine to Telegraph Creek, BC and see the transition from coastal rain forest to high desert. If only they would let me bring back some hares.

A great series of bird pics! Amazed by the bill of the chickadee - can't be easy to feed with something like that! Just got back from 7 amazing days in Iceland where we also saw Arctic Terns (amongst many other birds) - glad that the terns are around your way too.

Stellers Jay is one of my all time favourite American birds. I read in "Where the Sea breaks its back" - the story of Berings expedition to the North Pacific - that Georg Steller knew they had reached America when he saw a jay that was blue. - And the specimen proved they had been there.