What is your favorite bird? If you have one, make a comment about it at the end of this post. I'm curious to know.
Certainly I have many favorites. Everytime I go somewhere, I try to decide which species was my favorite of the trip. One obscure bird species stands out in my mind as my favorite bird of them all.
When I was young and living in Southern California, my family frequently went to one of the big zoos. I always loved the walk in aviaries that looked like tropical rainforests. Whenever I saw some spectacular tropical species i would wonder how great it would be to see that in a real jungle.
The first real jungle I ever got to visit was the tropical forest around San Blas, Mexico. I was a young man, and I was thrilled to see all the parrots, iguanas, coatis, etc. One day I was introduced to a fellow birder from Israel named Noam. He told me about a nearby area called Singayta. It had the biggest trees, and the most exotic birds in that part of Nayarit.

We made plans to visit it the next morning. It was nearly an overwhelming experience with all the new, and colorful birds that were everywhere we turned. One bird in particular impressed me more than all the rest. 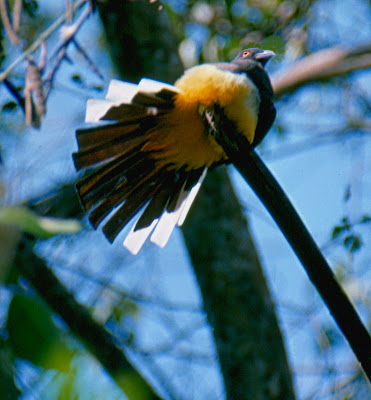 We saw this odd thing above the trail with it's tail spread. I could'nt tell what I was looking at. To me it was the very definition of EXOTIC. Noam told me it was a Citreoline Trogon sunning itself' in the early morning light. We soon saw a few others. 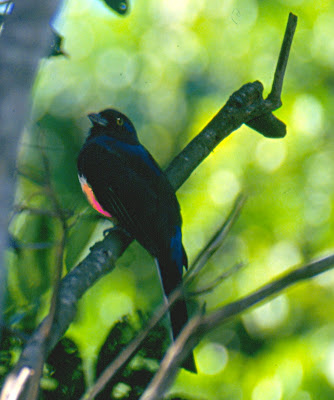 This is the male. It has a glossy sheen to it's back feathers. Males are shyer than females. 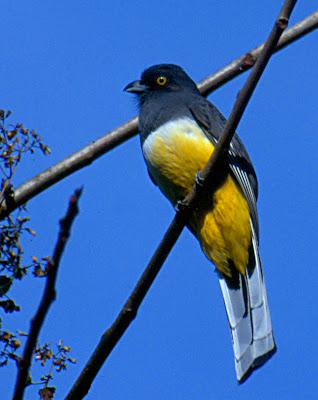 Citreoline obviously refers to the citrus,(lemony) colors of it's belly. Someday I will do some blog posts about the other great birds we saw that memorable day.
Subsequent to that first morning in Singayta, I have seen many more trogons in the San Blas area. The thing that attracts me to them is their quiet curiousity. The above female is an example of that. It was perched with a male about 100 yards,(meters) away in the swampy part of Singayta. I could not get to where the birds were because of the terrain, and a fear of crocadiles in the water.
This lovely female flew over to me so I could get a better photo. The male stayed where it was. 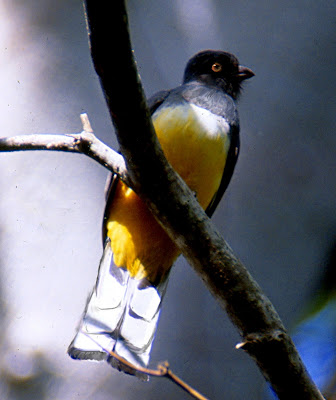 On another occasion in Singayta, which is five miles inland from San Blas, I was tired of craning my neck upward to see birds in the tall trees. Since there was no one else around, I layed flat on my back in the trail. Then I started making all kinds of odd sounds to see what I would attract. Whistles, croaks, fart noises, anything that did'nt sound like a human voice.
The first bird to check me out was a Masked Tityra. It's own voice sounds just like a frog's croak. It stayed just long enough for one quick photograph, and was gone. Then this beauty showed up, and perched directly above my head. I shot this photo without even raising my head from the ground.
Posted by john at 5:24 PM

Remember that evening sitting around the campfire along the Blue, when we all contributed our favorite species from each bird family? I don't think mine have changed a whole lot. For now, I'm really looking forward to hearing Cactus Wrens and Gambel's Quail when I visit Tucson in July. Those are the sounds of the Sonoran Desert that I miss the most.

Your going to make me cry, remembering the good old days. I miss the birds and people of Arizona terribly. You can never go home again, can you?