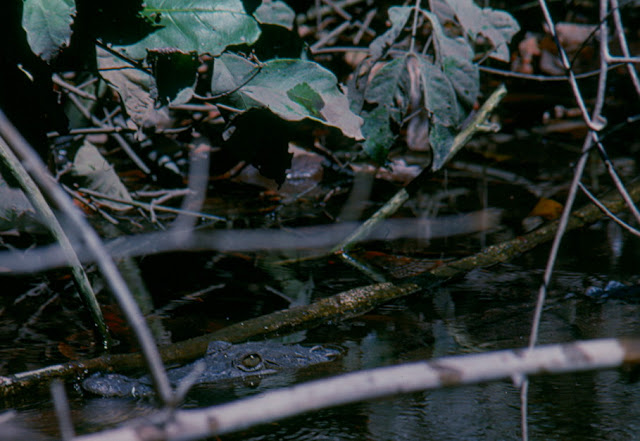 Way back, when I was 21 years old, I was hitchiking with some friends down in Mexico. We stumbled upon the small fishing village of San Blas, in the state of Nayarit. This was destined to become a place that I would return to again and again. It was my first foray into the Neotropics.
The Mangove Swamps that surround the town represented a mysterious wonderland in my young imagination. Although I didnt have time to explore them on my first trip there, I vowed to myself that I would return one day and explore every bit of it. Which is what I did.
The photo above is the first wild crocadile that I have seen. It is about 4 and a half feet in length. An American Crocadile. I wanted to jump into the water and capture it, but common sense took control of me.

These American Crocadiles in the swamp are no bigger than the first, but I have seen a few that were in the 10 to 12 ft range. The local fishermen hardly consider them to be dangerous. They are fairly shy, and usually slip into the water in complete silence when you approach them.

The American Crocadiles in Costa Rica tend to be much bigger. Especially on the West coast. The Tarcoles River is famous for it's abundance of large crocs. The Panamerican Highway crosses the river and many tourists stop at the bridge to see the huge crocadiles that gather beneath the bridge. I believe they are being fed there. These guys are in the 14 to 15 ft range. That's just about 5 meters.

Sensible people are content to photograph the crocadiles from the safety of the bridge. Naturally I had to get closer, so I unobtrusively made my way below the bridge. I'm pretty sure that this guy was inviting me to put my head in it's mouth but I politely declined. You can judge a crocadile's size by comparing the size of it's eye to the rest of it's body. Small crocs have large eyes. Look how tiny this croc's eyes are. It was huge. 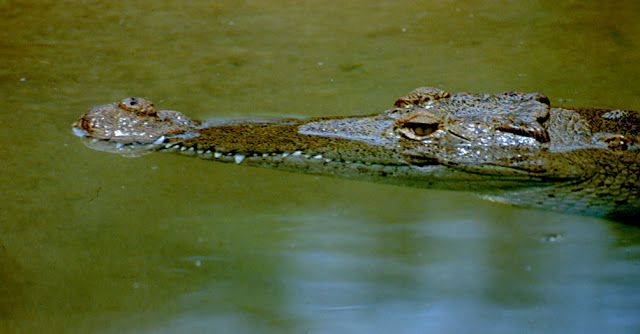 This toothy crocadile cruised alongside our raft on the Corobici River further north. 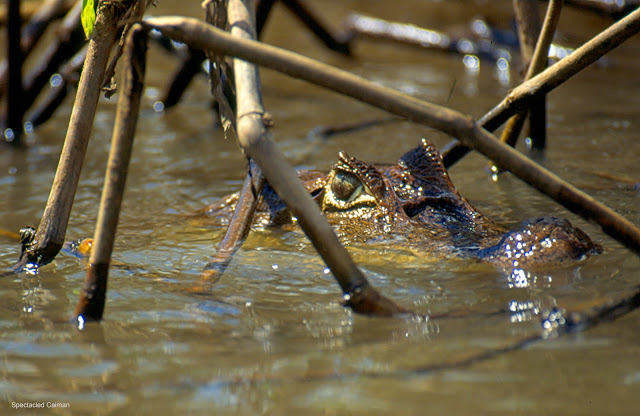 Costa Rica also has many Spectacled Caimans. They are smaller than crocs and stick to fresh water where crocs prefer more brackish water. This individual was at Cano Negro near the Nicaraguan border. 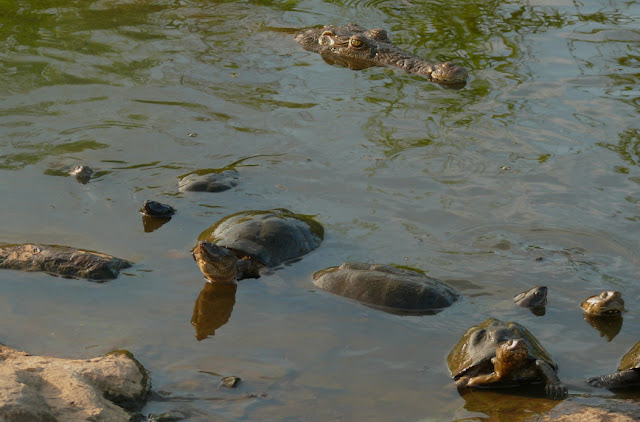 Africa is infamous for it's man eating Nile Crocadiles. This small Nile Crocadile in Kruger NP in South Africa last Feb. was begging for handouts along with these Side-necked Turtles. He didnt get any from me.

Also in Kruger, we witnessed another crocadile capture a large fish.

In Ndumo Park we were accompanied by an armed guide while we walked along the riverbank to look for birds. He was worried about dangerous hippos, not crocadiles.

This big crocadile in Ndumo appeared not to have a care in the world. It may have been potentially dangerous, but I thought it was too fat to pose any threat as I walked up to it. I worried about the crocadile that I was'nt seeing.
Posted by john at 6:00 PM