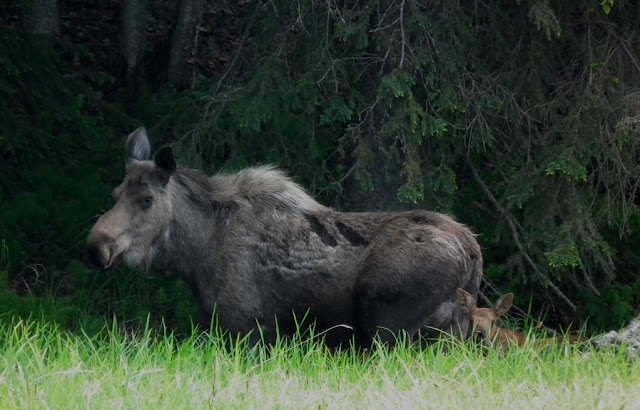 Last winter there was a mini invasion of Eurasian birds. I managed to see the Redwing, Dusky Thrush, and Eurasian Widgeon, but I missed several other things. This summer has seen an invasian of stray birds from more southerly regions. I missed the Great Blue Heron, Great Egret, and Caspian Terns amoung others. I did get the Franklin's Gull last week.
For a few days now, AK Birding has been reporting another new arrival to the state. It has been seen near Westchester Lagoon, so that's where I headed this morning. At Fish Creek I saw the Sandhill Crane and this Moose with a very young calf. I don't know what those two dark slashes on the cow's back are. 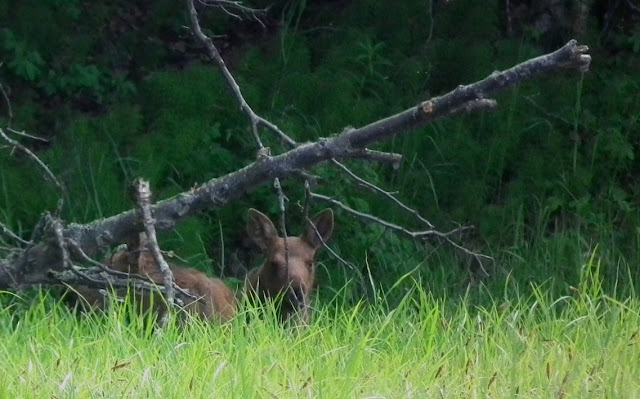 The curious calf. I was far enough away, not to have to worry about the protective mother. 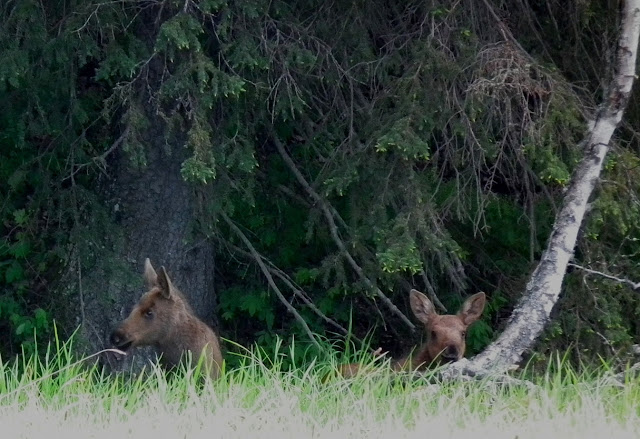 Check it out, there's two of them. I can't spend too much time watching them, I've got a vagrant to find. 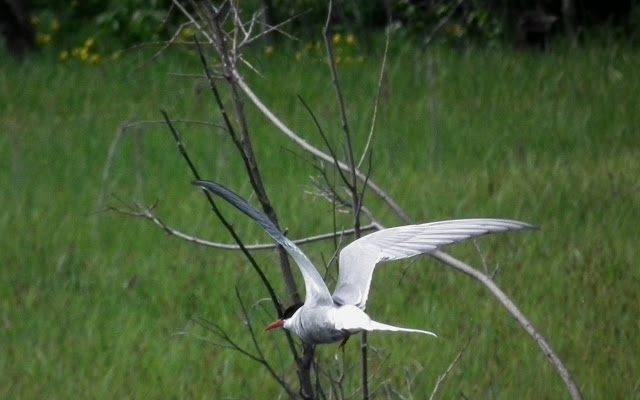 One of these days I'm really going to get a great shot of an Arctic Tern in flight. This one is not too bad.
Now I have to move along to find my target species. 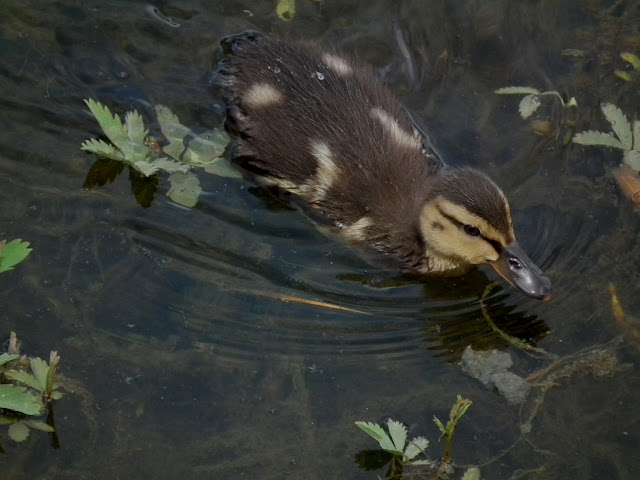 Although I was too slow on the trigger to get photos, I watched a Bald Eagle snatching baby gulls and ducklings. The adult birds were nearly apoplectic. This young Mallard was safe while it was in close proximity to people. 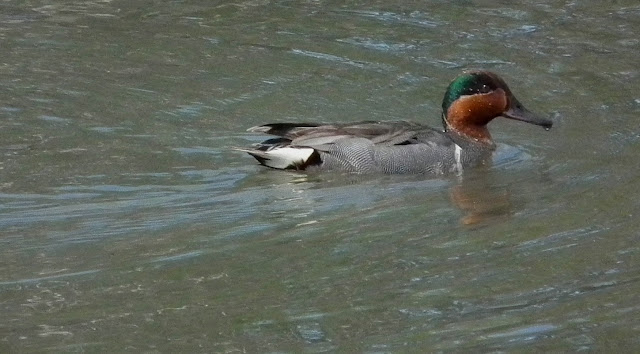 There were only drake, Green-winged Teals. The hens are still sitting on eggs. 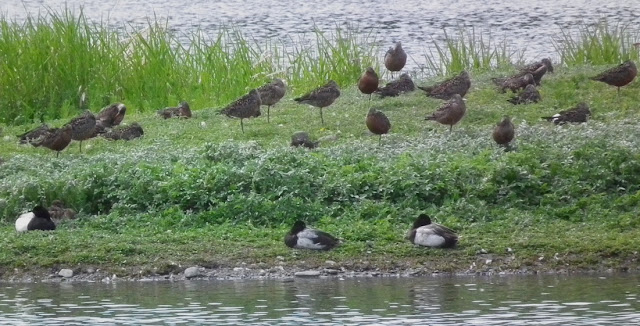 One of the islands in Westchester had a bunch of resting Hudsonian Godwits. Mostly males. The females must also be sitting on eggs. 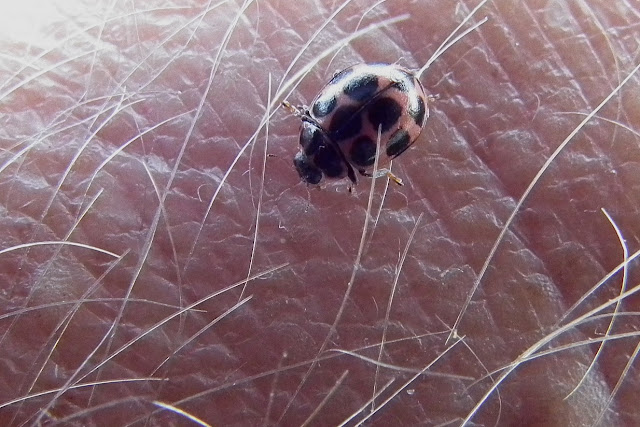 Alaska has very few beetles. Those that do occur here are very small, like this ladybug on the back of my hand. Tiny, even by ladybug standards. Now it's back to the search for the vagrant. 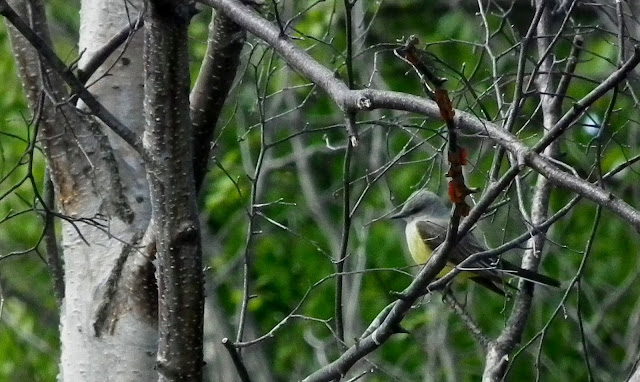 When I finally made it to the slough at the far end of Westchester Lagoon, Bob Winkler, president of the Matsu Bird Club was already there. He had his scope on the vagrant. Can you tell what it is? It's a relative of the flycatchers, these birds normally do not stray north of extreme Southern Canada. They are usually birds of open country. 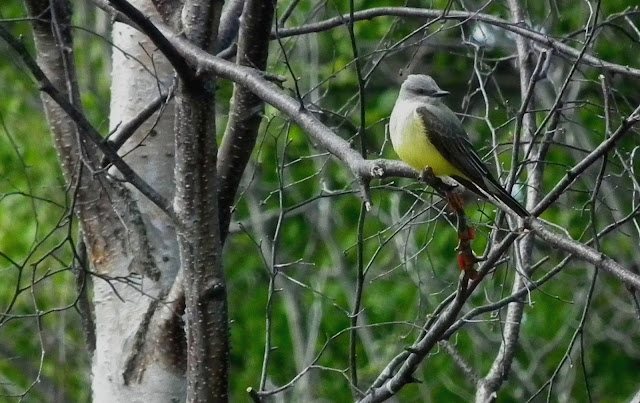 A better photograph of a Western Kingbird. I have seen many of these in AZ. and other western states, but this is a new one for my Alaska bird list. This is the bird that first inspired bird expert and author Kenn Kaufman. His field guide of North American Birds is unsurpassed, and his memoir, Kingbird Highway is classic avian literature. I met him and showed him my artwork several years ago in Girdwood, AK. A very pleasant fellow.
Posted by john at 9:39 PM

John!Do not breeds the blue heron in the Anchorage area?.In my north American bird field guide, the north distribution boundary is just in Kenay peninsula its that correct?.And also, did you see in any occassion, the common crane vagrant in alaska?.Other espectacular bagrant that i heard that come several times in your country, is the gigantic Steller sea eagle in Aleutians,Pribilof and Kodiak icelan.

Marc,
The Great Blue Heron is occasionally found on the Kenai Peninsula, but they are not easy to find.
Since I have lived in Alaska, only one Common Crane has been seen in Alaska. It was hundreds of miles away, and only stayed for a few hours.
The Aleutian Islands, (where Steller's Sea Eagles are rarely seen) are closer to Asia than to North America. In late winter, a Steller's Eagle was seen near Juneau, which is far from Anchorage. It is very expensive to fly to these other parts of Alaska, so I never go there. It is often less expensive to fly to Europe, than to Juneau.

I photographed the western kingbird recently in open prairie grasslands, I sure do love the soft yet colourful look to this flycatcher. I was amazed at watching them catch the may flies and other bugs on wing.
Could the dark patches on the moose be just where she has started to shed her winter hair and thats the the new coat that looks so dark?
have a great day, hugs!

Tess, Thank you for your comments. Your explanation of the dark patches on the moose's back, is most likely correct.