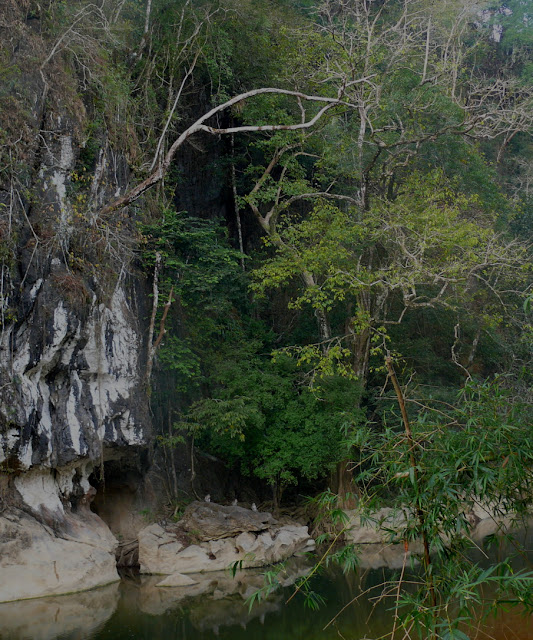 The guidebook mentioned treehouses, Tigers, and wild Asian Elephants in the little known Khao Sok National Park.. It also mentioned several other interesting features about this picturesque wilderness in southern Thailand. I really wanted to go see it, even though it was far out of my way, and I was very intimidated by the idea of travelling alone in a country where I could'nt even read the signs, let alone understand the language. 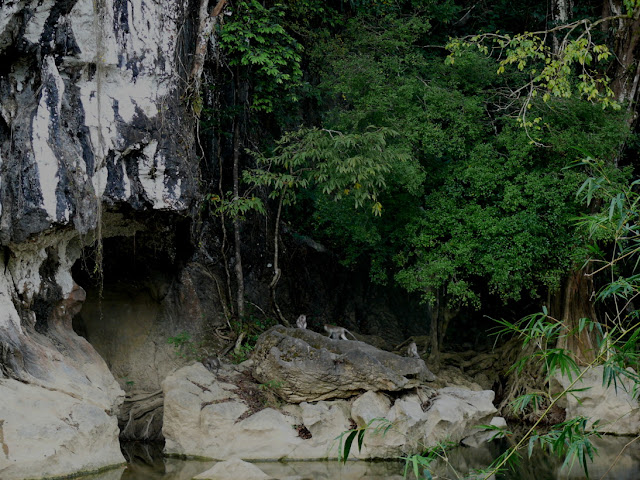 I arrived in the bus station of the large city of Surat Thani and was approached by an english speaking Tuk tuk driver, "where you go?". I gave the name of a local hotel that the Lonely Planet guidebook recommended in its budget lodging section. We agreed on a low price and we were on our way to the hotel.
As we putted along the sultry, and chaotic city streets he asked about my intended destination, knowing that no foreigners stayed in Surat Thani. It was only a stopover for more exotic destinations.
I told him that I wanted to catch a bus headed in the general direction of Phuket in the morning and get off at the turnoff to Khao Sok. Then I hoped to hitch a ride up to the national park. He said, "why not go tonight? I know van that go to Khao Sok tonight." That sounded good to me, I said, "let's go there instead of the hotel. 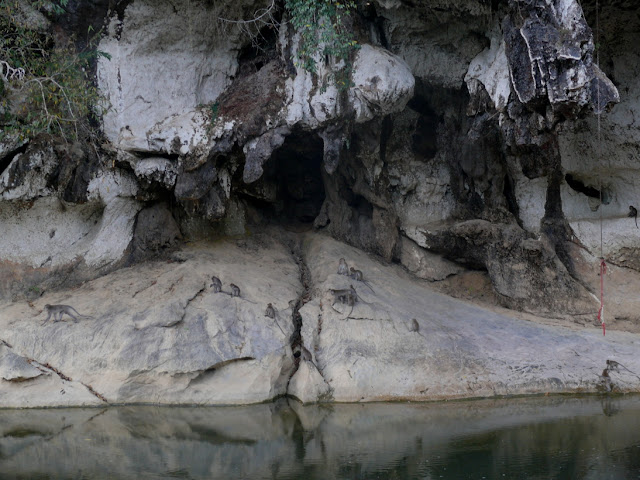 The van carried three Brits, a Mongolian woman, and myself across the Malay Peninsula along some winding mountain roads, and deposited us at a lodge just as a tremendous thunderstorm caught us unprepared. The lodge staff quickly sheperded us to some bungalows up on stilts.
In the morning I stepped out on to  my bungalow's balcony and saw a spectacular rainforest habitat. My bungalow was on the edge of the Khao Sok river with towering jungle-clad cliffs on the far side. 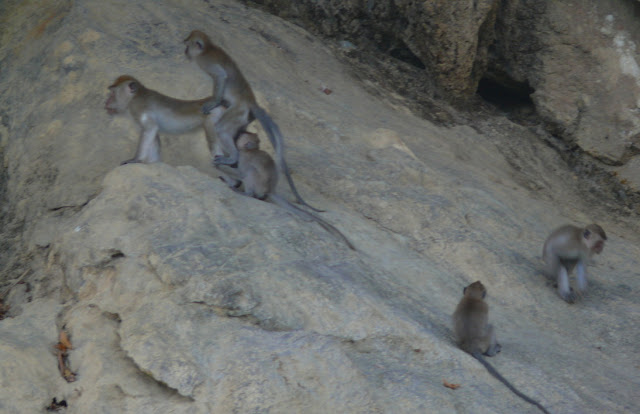 There were lots of macaques, what I called, Long-tailed Macaques, scampering around the cliffs. In the late afternoon the macaques would come down to the water to swim and play. Some of them dove off the rocks and even swam underwater. In the photo above, we see a female, mock copulating with the male. He tolerated it, and no doubt it was part of some complex, monkey pair bonding behavior. 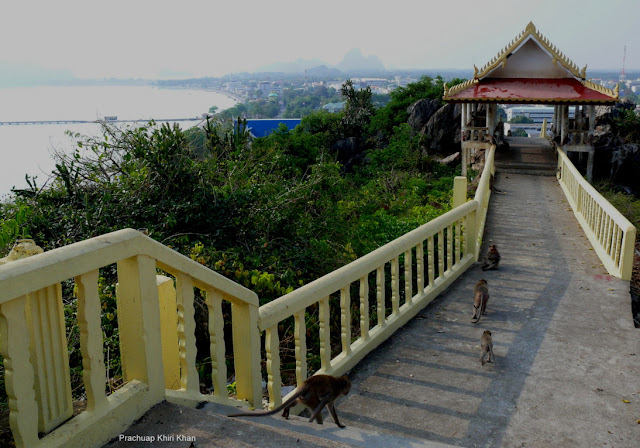 After several days of exploring the incredible park, I had to head back to Bangkok. It is a very long bus ride, so I stopped over at the laid back town of Prachuap Khiri Khan, about halfway to Bangkok. There is a Bhuddist monastary on a hilltop on the north end of town. The stairway leading up to the monastary is populated by a horde of Long-tailed Macaques. 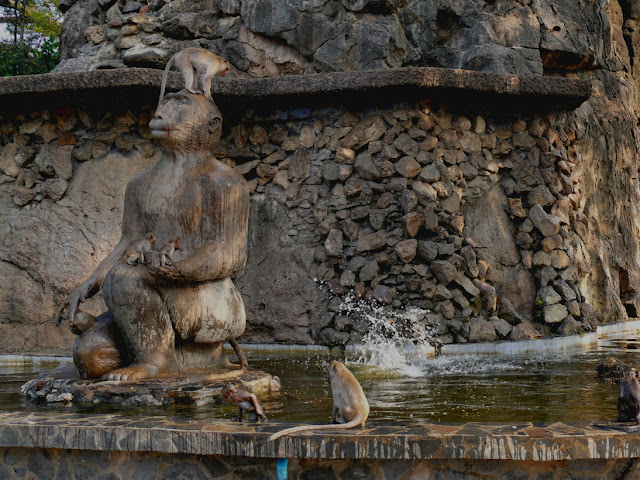 They built a fountain at the bottom of the hill with a monkey statue that is used by the macaques as a platform from which to dive into the water. It's all very amusing to watch. 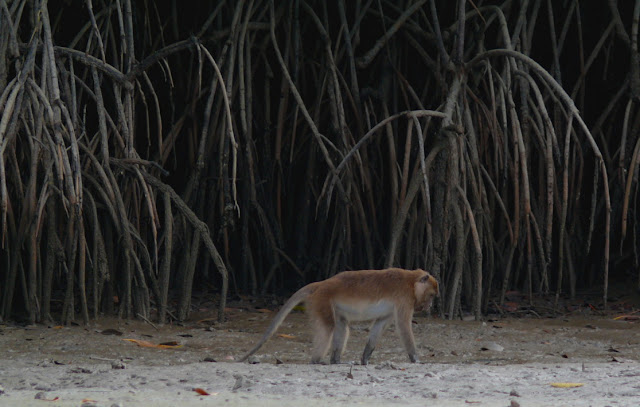 Even further south than Khao Sok, there are extensive Mangrove swamps around Phang Gna, and Krabi. These swamps are home to a much rarer species of macaque, Crab-eating Macaques.  There are minor physical and behavioral differences between the two species. I visited these places on my last trip to Thailand, and enjoyed observing Crab-eating Macaques in the swamps. 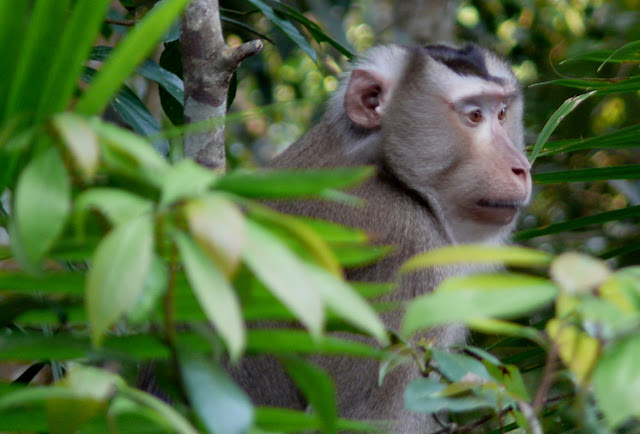 The larger, Short-tailed Macaques occur north of Bangkok. This large male was at Khao Yai National Park, another great place in Thailand. More monkey business to come.
Posted by john at 6:15 PM

Sounds like a good trip. Hope to see some paintings too.

Thanks for your comment. I'm slowly working on a large painting. It will be a long time before it is completed.

Your travels take you to some of the most spectacular places on earth John! I'm always left wondering where you will take us next....thanks for sharing your inspiring journeys.

In regards to your mustang painting; I'd love to see your work in progress and how you approach such a large piece.

Thank you for your comments Colette. I hesitate to post photos of my paintings in progress because, unlike you, I mess up paintings, get discouraged, and never finish them.

All the more reason to show them.