Last Thursday night, Jan. 30th, at about 8:00pm, Betty called me and the conversation went something like this; "Do you have to work tomorrow?"
"yes," I responded.
"Oh darn" she said.
"I thought you were spending the winter in Hawaii." I said.
"We are, But I came back for..."
"The bird I interrupted."
"Yes" she said.  I needed no further explanation. I knew why she left Hawaii to come back to Alaska in the dead of winter.
"Count me in I said". We were going to Seward. Betty had one target bird that she wanted to see and I had four possible lifers to pick up in Seward, including THE BIRD.
We left Anchorage a few hours before dawn. It is just starting to get light in the photo above. 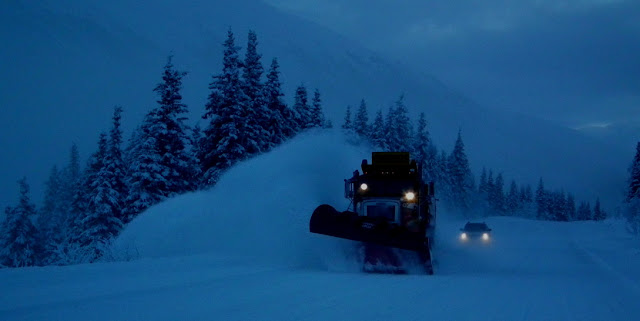 The highway in winter is always treacherous. It would be almost suicidal to attempt the 125 mile drive without studded tires. Even then, the highway is often closed down by avalanches that block the road, sometimes for days at a stretch. 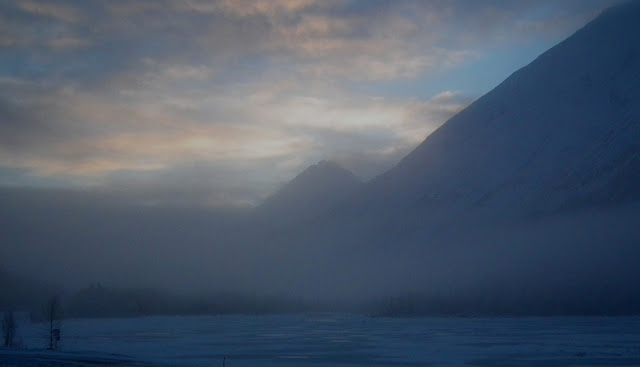 Eventually the sky started to brighten up a bit more. It was an encouraging sign. 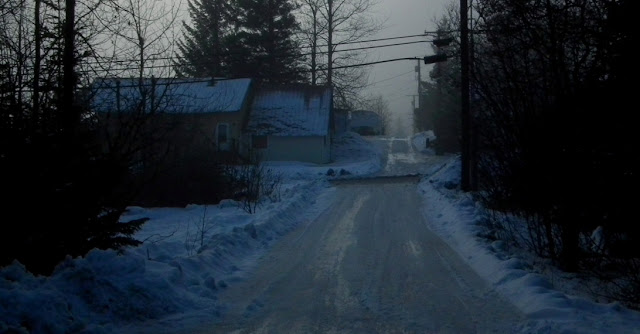 We finally made it to Seward without incident. We knew right where to go because Seward has about a half dozen intrepid local birders who keep track of what's in town, and where the birds are from day to day.
We knew to hit the alley behind First Avenue. The ice on the road was extremely slippery and we had to use our ice cleats to keep upright.
The thicket in the right of the above photo is where two species of old world birds had been seen in the past few days. Carol,'Griz' was there and she showed us the brushpiles where our birds were being seen. 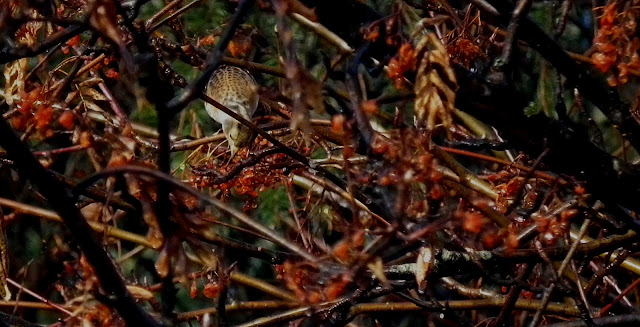 In a short while we spotted this European vagrant; my first lifer of the year. Can you guess what it might be? 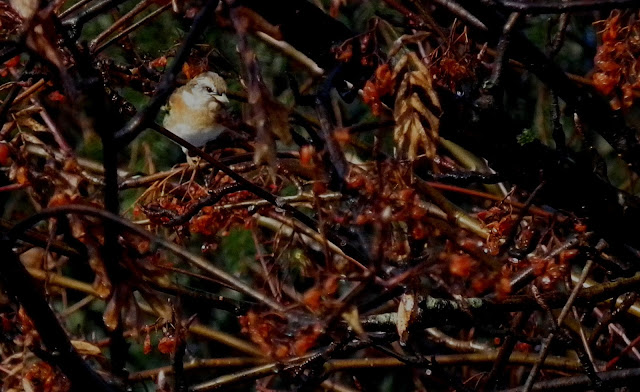 Another bad photo. Any guesses yet? This is not THE BIRD. It was new to me, but Betty had seen them before. They turn up somewhere in Alaska, (usually on islands like the Aleutions, or St. Lawrence Is.) nearly every year.
There are currently at least two of these Bramblings in Seward right now. They are a relative of the finches, although these birds show no interest in the nearby bird feeders. They prefer to eat the pulp of Mountain Ash berries. 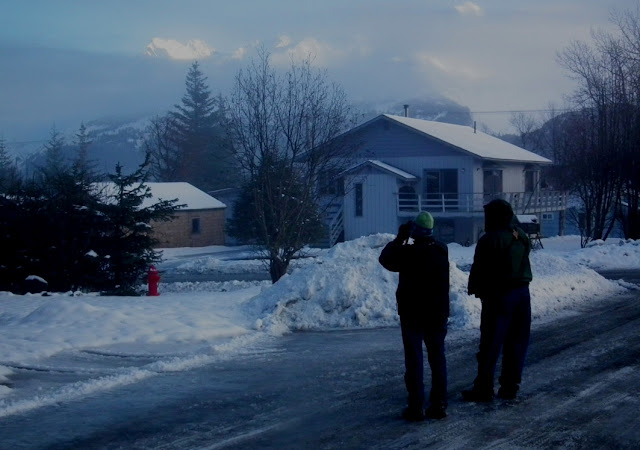 Carol had to leave, but Robin and Peregrine Joe soon turned up. They led us around the corner to another spot where THE BIRD has been seen lately. In the photo above, Betty, (with binocs) and Joe check the ground under the small trees to the left of the red fire hydrant.

THE BIRD had been associating with the many Pine Siskins and Common Redpolls in the area, but it was not with them when we got there. 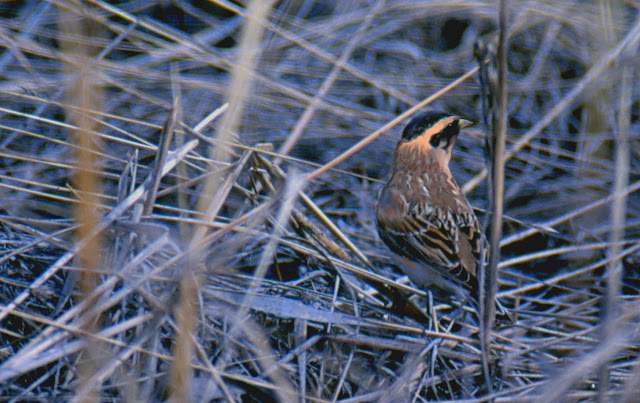 Robin and Joe soon went to get some lunch while Betty and I sat in the car to eat our peanut butter sandwiches. We were just about finished when Betty said matter of factly, "There it is." I got my binoculars up instantly and took in a great view of my second lifer of the year. Then I grabbed my camera and got out of the car to get a decent photo. Can you guess what it is? Well this photo is not it. The actual bird disappeared before I could get a single shot.
I used my artistic skills and photoshop to transform this old photo of a Lapland Longspur into a semi-recognizable rendering of Betty's main target, Siberian Accentor. It is an insect eater and a skulker that usually stays on, or near the ground. The seward Accentor prefers to stick close to the ground underneath spruce trees. 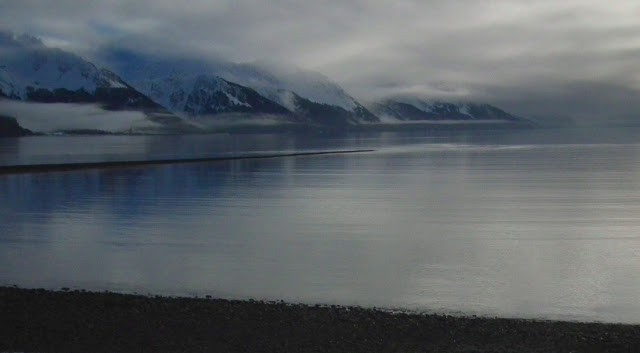 Two lifers in one day after so many years in Alaska is a great day for me, but we still had a few hours to look for my other two target birds.We met up with Peregrine Joe again, and he led us to a spot on Resurrection Bay that is usually closed to the public. Joe has connections. 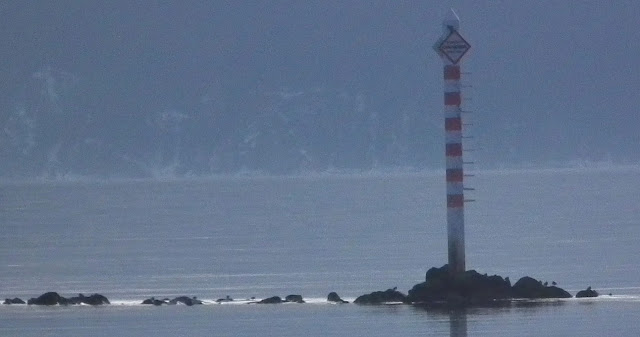 Can you see the little bumps on the rocks to the left of the, 'barber pole'? as it is known locally. My third new species of the day, and the year, Rock Sandpipers.
There was no time to look for further species because we had a long drive back to Anchorage, and we wanted to get back before dark. 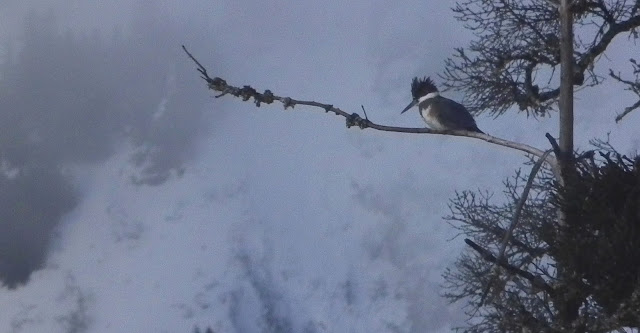 We did stop by a local pond where a Hooded Merganser had been posing well for photos but it was nowhere to be seen. We did get to see this Belted Kingfisher set against a dramatic mountainside.

There was a lot of majestic scenery on the way home and I had a hard time narrowing down the many photos I shot to include in this post. We passed by many hundreds of frozen waterfalls like these. I doubt that I will have a better birding day this year in Alaska. It was certainly worth missing a day of work for.
Posted by john at 4:24 PM

John,you must be very happy,for this total amount of birds and bird vagrants that you have observed in full winter season.

Great birding trip! I really enjoyed the photos too!

Thanks for your comments. I am accumulating a nice list of European birds although the only bird that I have actually seen in Europe itself is the Carrion Crow, (at the airport in Paris). The rest I have seen in Southeast Asia, Africa, and Alaska.