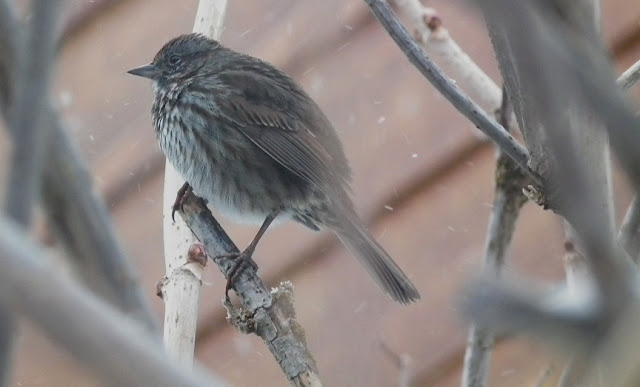 Today, Saturday, Feb 23, was the annual Anchorage Audubon field trip to Seward. The photo above is the best photo that I have been able to get of a Song Sparrow so far. I'll take what I can get-with gratitude. It was near the alley where I saw the Brambling and Siberian Accentor on the last day of January. See the Skipping Work post for that story. If only I could have gotten equally good photos of those two Old World vagrants.
I could not get a photo of the Siberian Accentor, but Seward birder extra-ordinaire Carol Griswold managed to get the Siberian Accentor and the male Brambling, (along with a Varied Thrush) in one photo. She graciously gave me permission to use her photo when we met up with her today. To see more incredible close-up photos of these birds and many more, see her wonderful blog; Sporadic Birder, here. She is a very good writer as well. 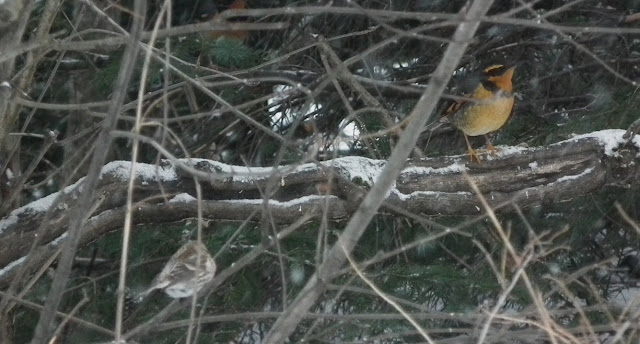 This is my humble photo of a Varied Thrush and Common Redpoll from today. We saw both the Siberian Accentor, and I believe both the male and female Bramblings but my photos were dismally bad. 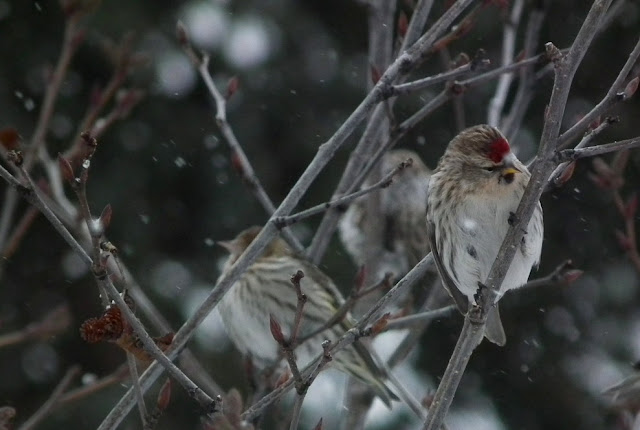 There were plenty of Common Redpolls everywhere. 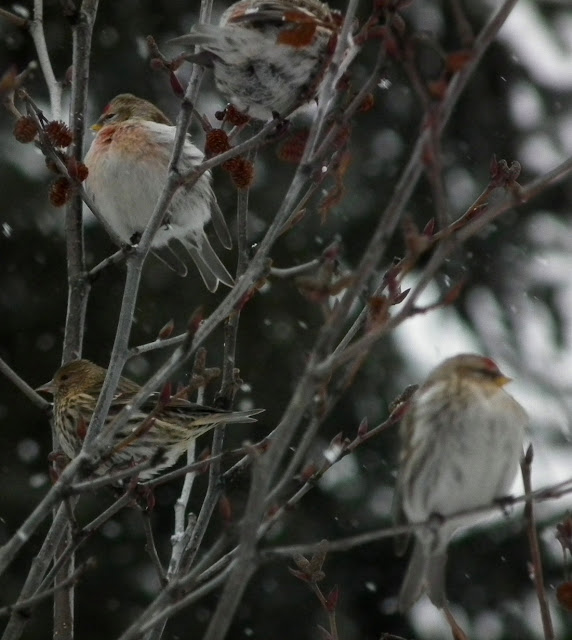 This photo compares the difference between two closely related species; Common Redpolls and a Pine Siskin in the lower left. 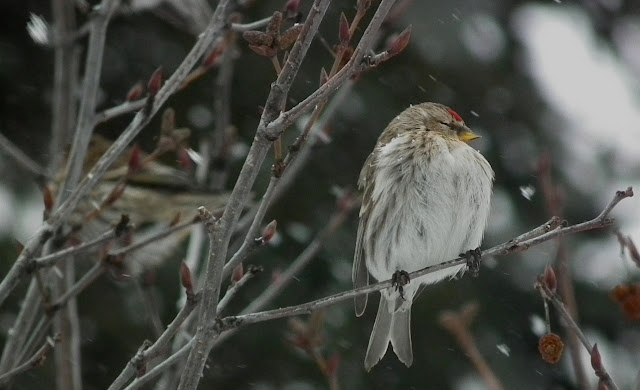 One more photo of a drowsing redpoll. 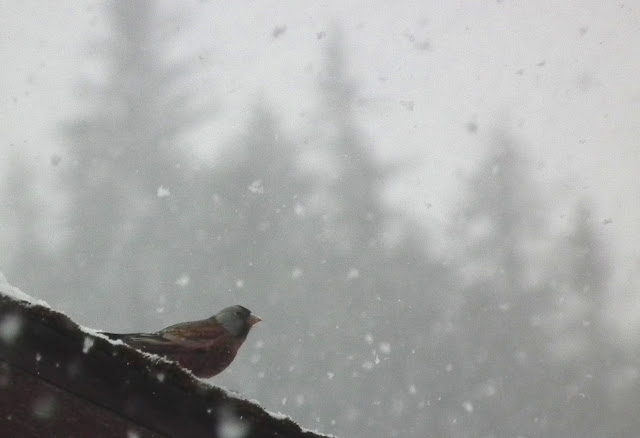 Today was only the second time that I have seen, Gray-crowned Rosy Finches. 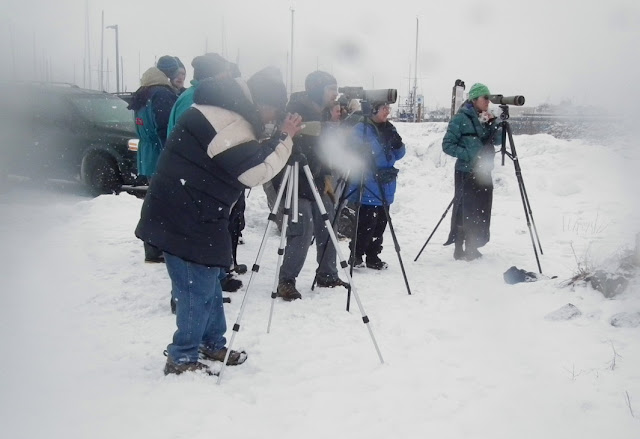 After checking out the small passerines in town, we headed down to the beach. As you can see, today was a snowy day, (most of it anyway). This is just a few of the many birders who showed up. 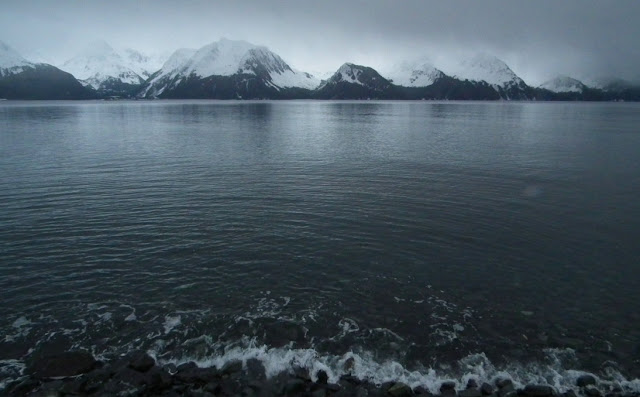 Resurrection Bay was dead calm, and most of the seabirds were very far away from shore. 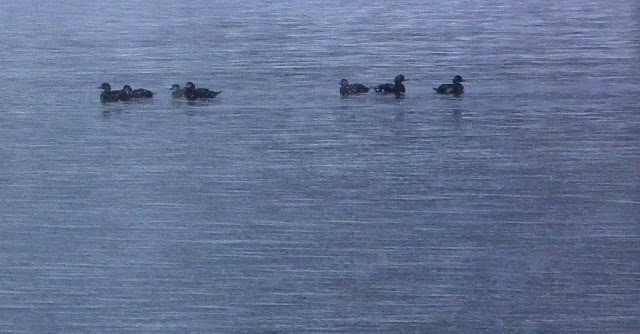 This might be a terrible photo, but it is the only time that I have been able to photograph Black Scoters. They are by far the least common of the three Alaska scoters. 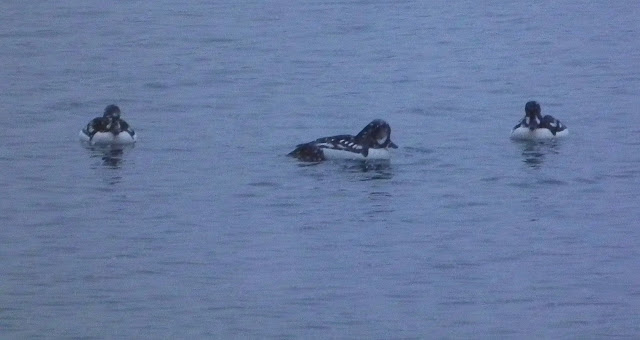 Like usual for Winter in Seward, there were many Barrow's Goldeneyes like these three males. There were also lots of Common Goldeneyes, Surf Scoters, Common Mergansers, some Marbled Murrelets, And only a few Common Murres. Other stuff too. 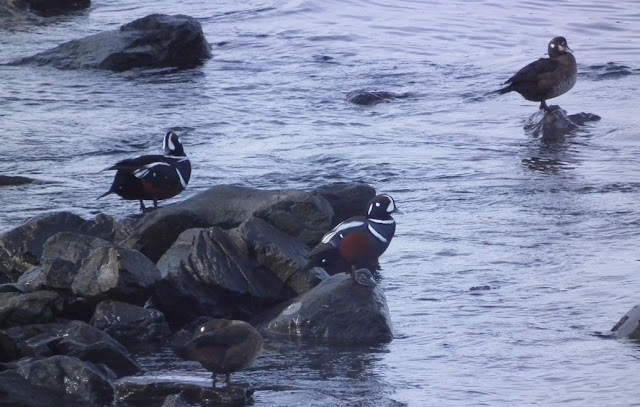 We also saw lots of Harlequin Ducks and I was able to get my best photos of them so far. Too bad the sky was so heavily overcast. 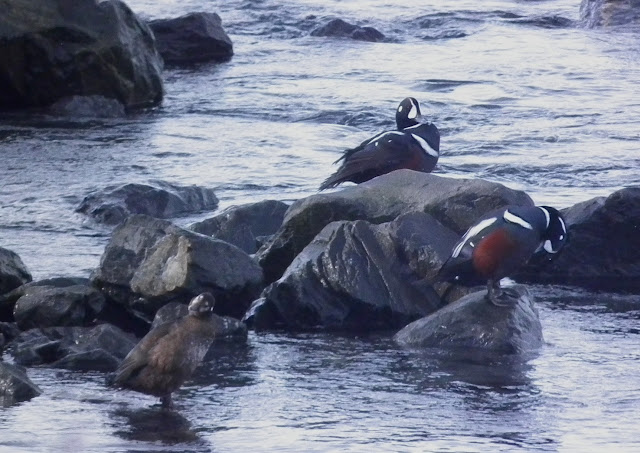 I think that these photos could be the basis of a decent future painting. 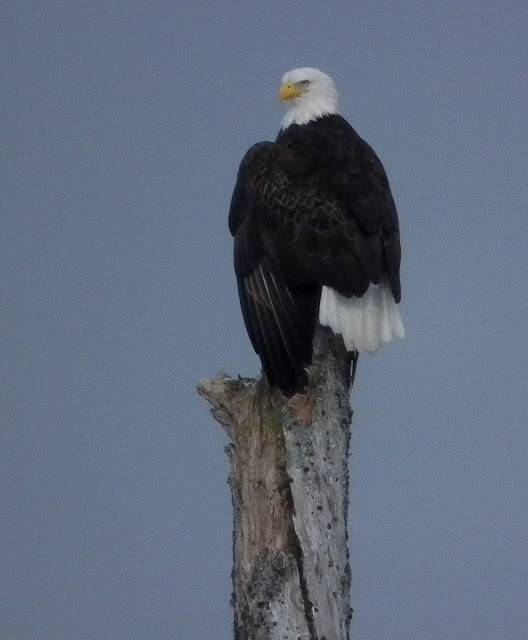 There were also a lot of Bald Eagles loafing about. I did'nt try very hard to get a good photo of them. This one seemed to be sunning itself when the sun briefly emerged from the clouds.
Posted by john at 12:53 AM

Hello,
I have been visiting your blog.
Congratulations for your work!! An interesting and nice blog!!
Good luck with your blog!
Greetings from Algarve, Portugal
Paulo Gonçalves

I invite you to visit my blog
http://viajaredescobrir.blogspot.com

Wow, these are beautiful! I bet they would make great paintings!

Great pics as usual John, the Bald Eagle is a cracker! I'm also really enjoying reading about the interesting birds you have been seeing lately - more please!

Thank you Paulo, Linda, and Jeremy. Hopefully, I will also post some new artwork before too long.