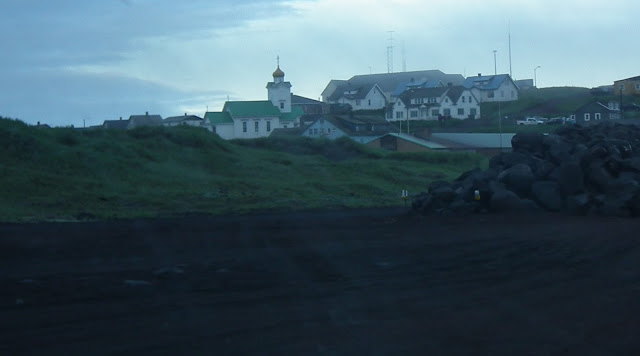 This second installment of my trip to the Pribilofs shows the somewhat picturesque village of st. Paul, dominated by the historic Russian Orthodox church.

The big draw for birders to St. Paul are the many alcids that nest all around the coast. Puffins, murres, and auklets can be seen in many places in the Pacific Northwest but the Pribilofs are one of the best places to get close to many species of them. The alcids that are featured in the first part of this post are the smallest of them all.
The photo above shows a flock of Least Auklets as they arrive to their nesting area. 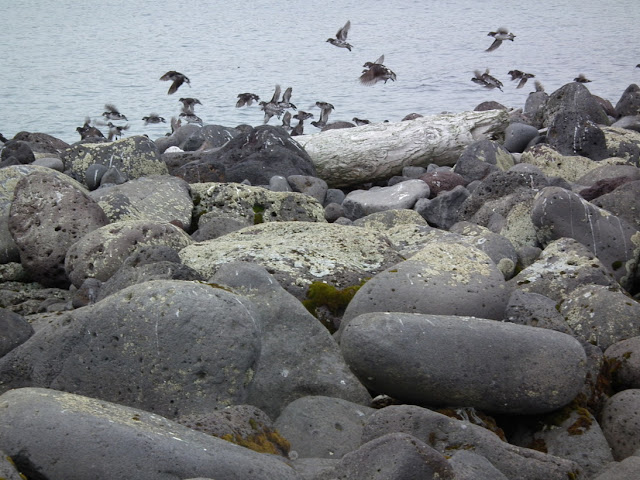 Least Auklets don't fight for space along the cliffs with their larger cousins. They nest under the boulders along this rocky beach. You can hop from boulder to boulder and listen to the constant chattering of the auklets under your feet. 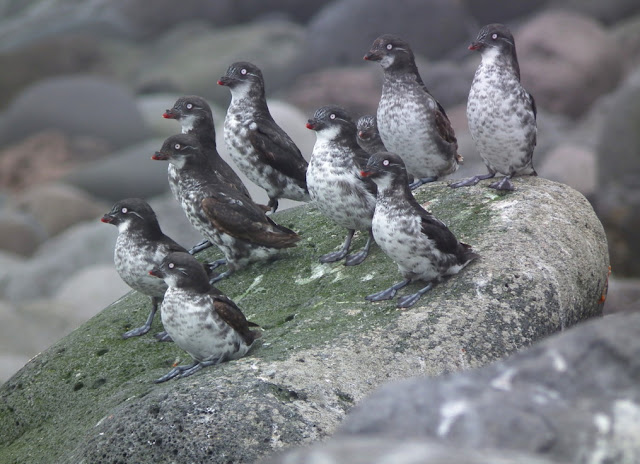 When we first approached the beach  most of the birds near us flew away. We sat down on a convenient rock and waited quietly. Soon the Least Auklets returned. Our guide Doug told us that if we sat still enough, they would even land on us. These guys are about the size of a grosbeak. 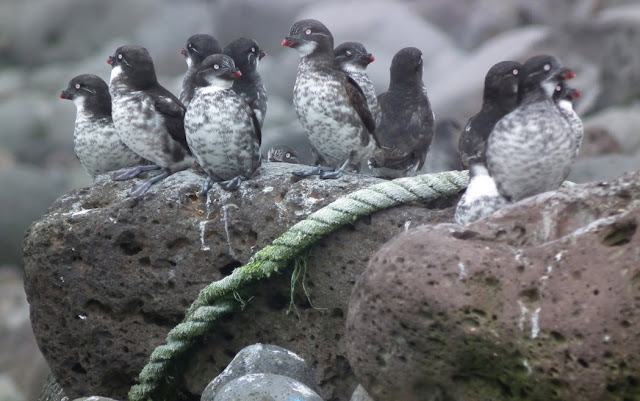 I made a comment about how adorable these little guys are. Doug said that their pale staring eyes made them look demonic to him. I'm pretty sure that the third one on the left is the spawn of Satan himself. The rest of them are just cute. 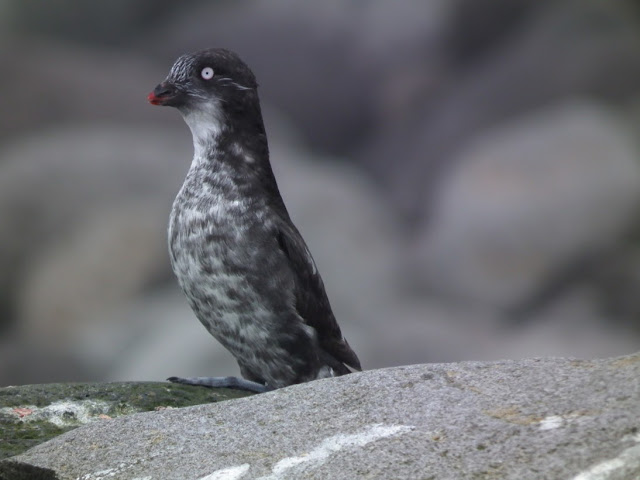 "Don't call me cute. Worship me or I will destroy you!" 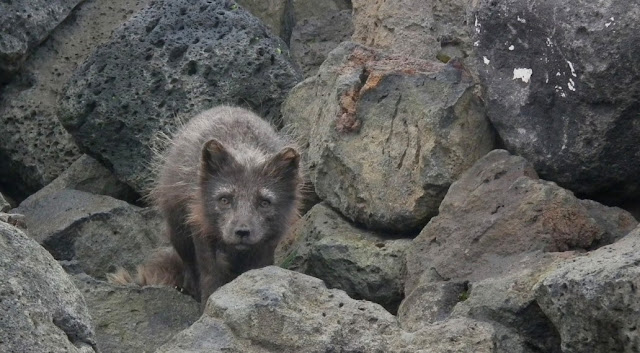 The real demons on the beach, at least for the Least Auklets, are the Arctic Foxes that roam the beach waiting for an opportunity to pounce. 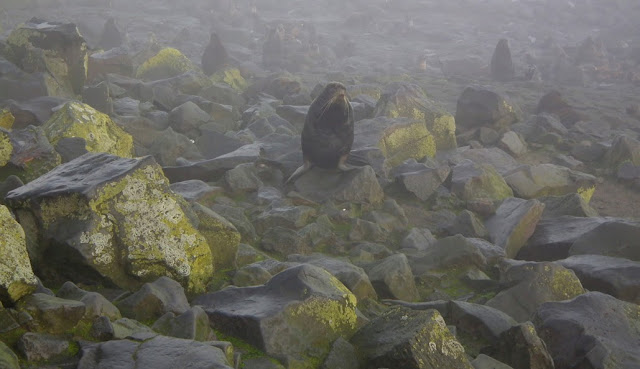 The other big inhabitants that share the beaches are Northern Fur Seals. There are several colonies of them around the island. They don't confine themselves to the beach; they even climb well up onto the slopes near the coast. 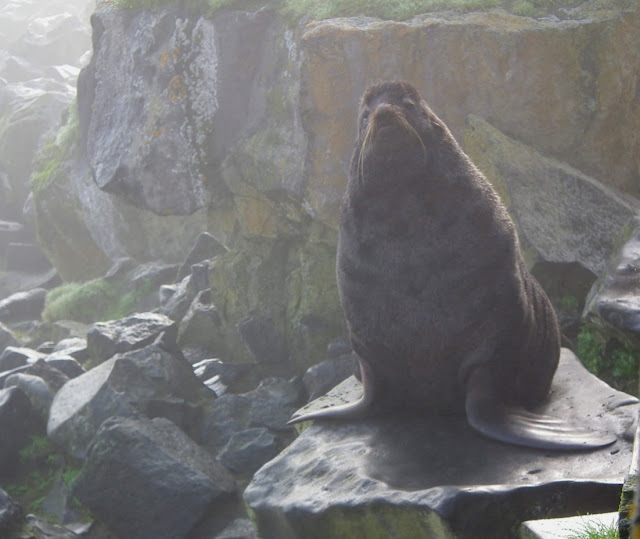 There are a few blinds, (hides), where people can observe the seals up close. The blinds are not there to conceal people, they are more of a refuge to protect people from the aggressive bulls. 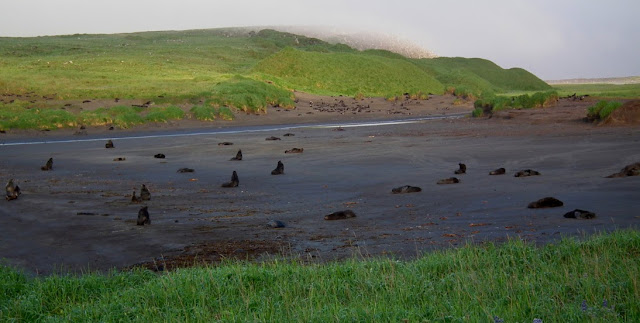 Forty or fifty years ago, there were well over a million Fur Seals on St. Paul Island. Now there are about ten thousand. Their population has dropped steadily by about six percent a year. If this rate continues, Northern Fur Seals will be extinct in about twenty years. What are the state and federal government doing about it? Mostly just wringing their hands.
Researchers have been studying the decline for decades. What is the cause of this disaster. Biologists have reached a consensus that the commercial Pollock industry is the culprit. Alaskan fishing boats are carefully regulated but foreign, i.e. Asian factory trawlers observe no law. Don't eat Pollock, I do not.  Pollock is commonly used in fish sticks and fish sandwiches at fast food restaurants. 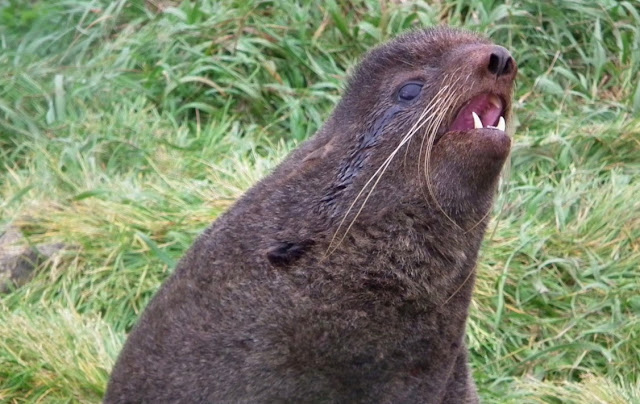 Many mature bulls carry scars from their frequent fights. There is plenty of room for them all. They prefer to fight each other for dominance. They will even fight you if you get too close. 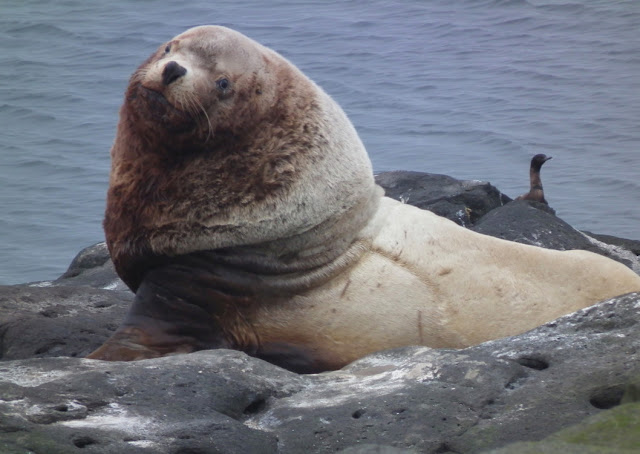 An even larger cousin of the Fur Seal; Steller's Sea Lions occur in much lower numbers on St. Paul. Their population is also in deep trouble because of over fishing for Pollock. The bird in the back is a Pelagic Cormorant. We also saw Harbor Seals and Orcas in the waters off the island.
More St. Paul, and less preaching to come.
Posted by john at 9:51 PM

Gotta get up there one of these days -- Alaska, I mean. An interesting read on northern fur seals is Victor Scheffer's "Adventures of a Zoologist" -- lots of info about the fur trade and early demographic studies by the USFWS.

Save up your nickels Codger. There are no bargains in Alaska. I'll look for the "Adventures of a Zoologist" book. A token number of fur seals are still taken by the native Aleuts every year, but the profit margin from the fur trade is no longer much of an incentive for them.