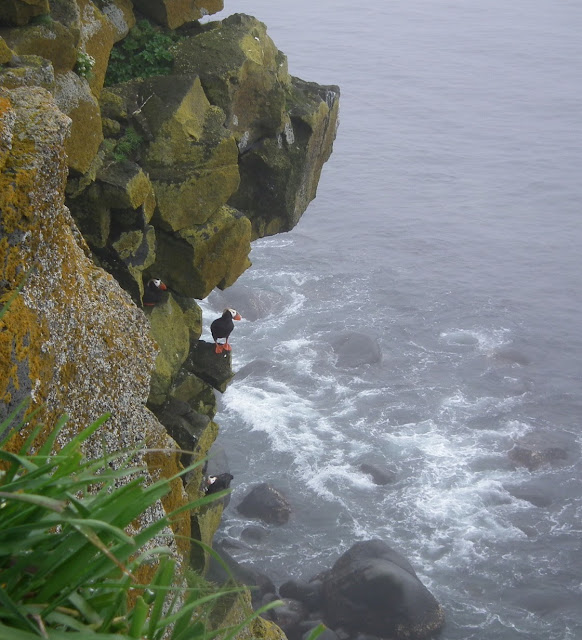 Personally I have never really suffered from vertigo, and climbing up or down precarious cliffs never really bothered me much. As I have aged I have lost much of my youthful agility. My sense of balance is nothing like it used to be. I have become a clumsy oaf. Fear of heights has crept into my heart.

Below the edge of the nesting cliffs on the Pribilofs there are often narrow ledges that are utilized by the various alcids and other seabirds. These are Crested Auklets above, a new and very beautiful species for me.
The only problem is that, in order to get good views of them, we had to climb down treacherous ledges to get close to them. 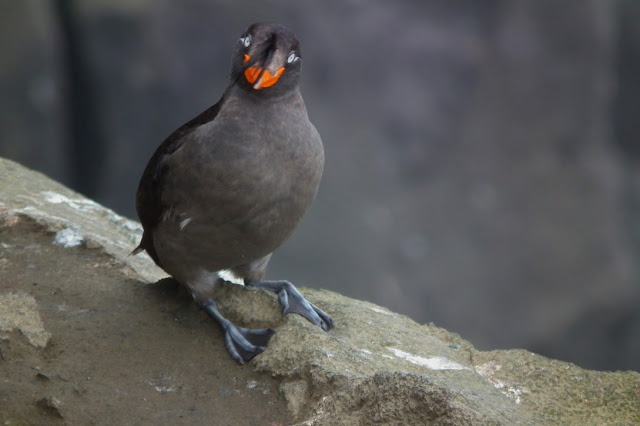 The birds must have a natural fear of Arctic Foxes, but when humans join them on the ledges they show more curiosity than fear. 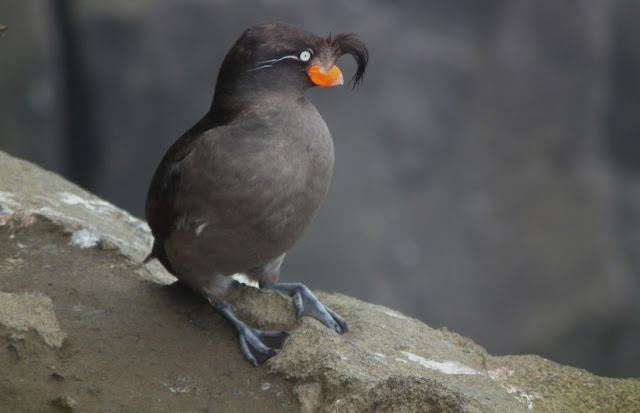 If you want to get a nice portrait of a Crested Auklet, you have to climb down the cliff. I really worried about the rocks giving way beneath my feet. I could even imagine them starting to shift under my weight. The experience was worth the stress I felt. 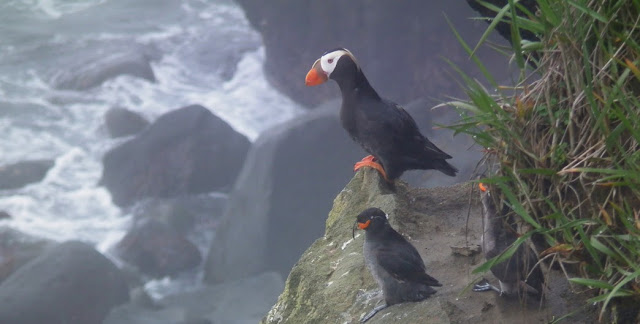 To me the real stars of the show are the Tufted Puffins. I have painted them many times. Those are Crested Auklets with the puffin to show the size difference. 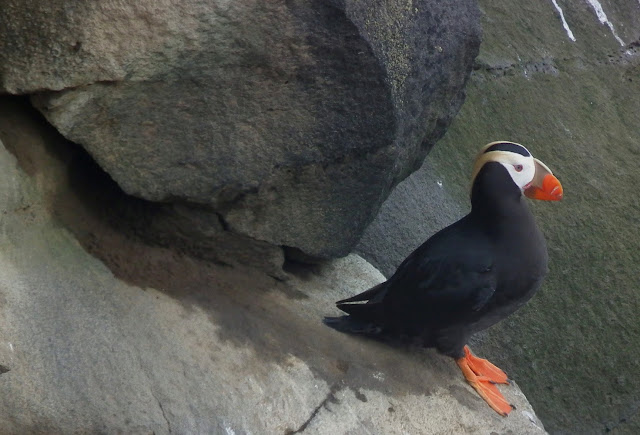 Although I have seen hundreds of puffins from a distance, this trip is the only time that I have been able to get passable photos. I would have loved to have a better camera and stronger light, but I'll take what I can get. 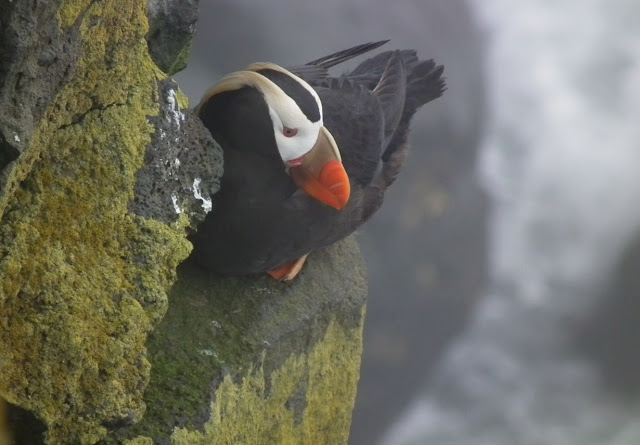 This bird will no doubt show up in a painting sooner or later. 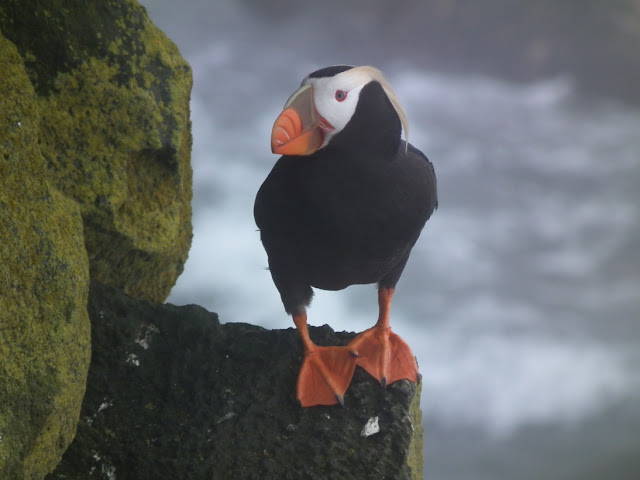 You can see this bird in the top photo of this post. See if you can pick it out. It will give you an idea of what steep rocks I had to climb down to get this photo. The same goes for the photo above this one. 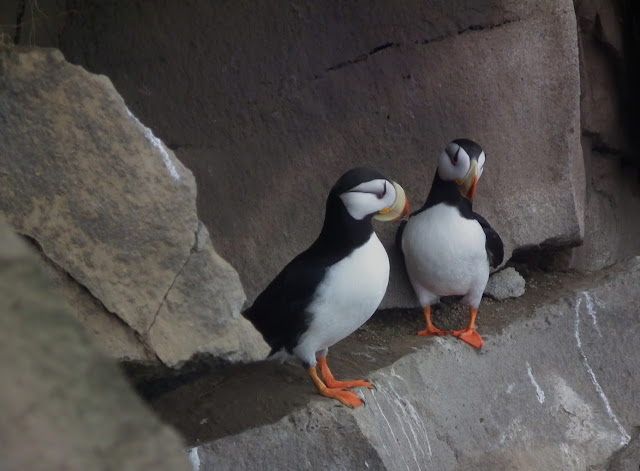 The other puffins on the island are the Horned Puffins. My camera had a hard time dealing with the strong contrast of the bird's black and white plumage. They were just as common as the Tufted Puffins. 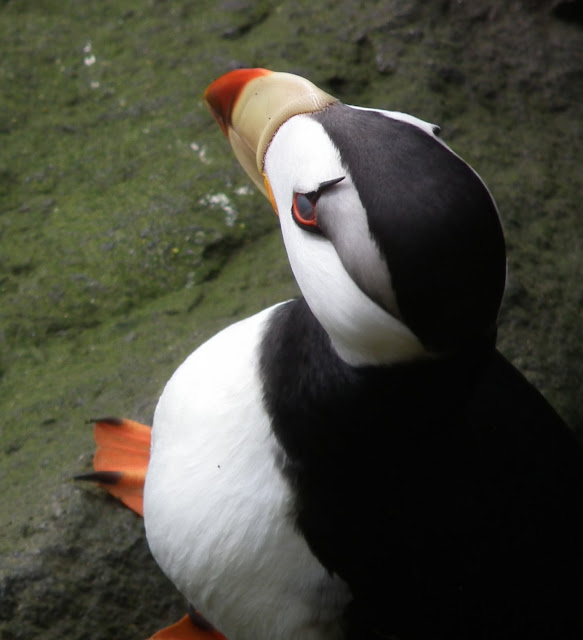 One ledge was too scary for me. I sat down and scooted up to the edge on my butt. Then I dangled my legs over the edge and looked down. This Horned Puffin was right below me. It never even flew.
That was enough rock climbing for me and I slowly clambered back up to the top of the cliff. 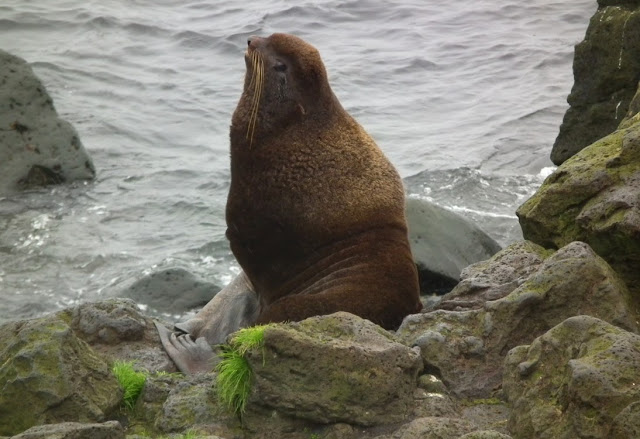 Before heading up I got a photo of a bull, Fur Seal on the rocks at the bottom of the cliff. 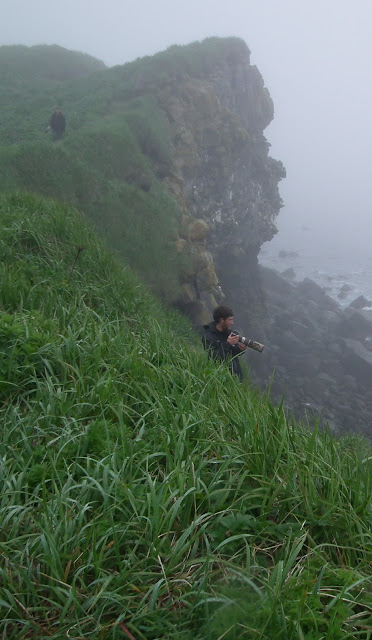 I'll end this post with a photo of our guide Doug at the top of the cliff where we started down. You can see that it was scary enough just getting down to the edge of the cliff.
Posted by john at 10:32 PM