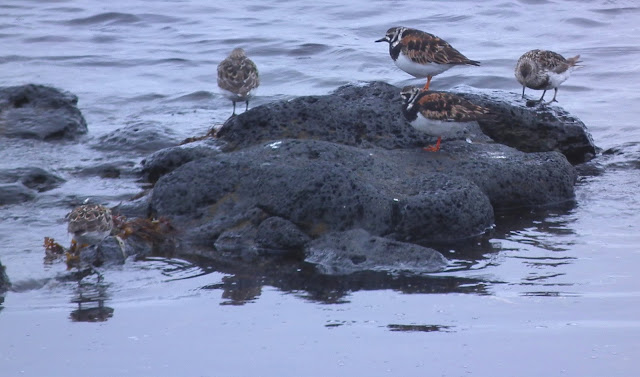 Back at the Northeast Point of St. Paul Island we saw some Ruddy Turnstones, but what are the other shorebirds with them? Any guesses? 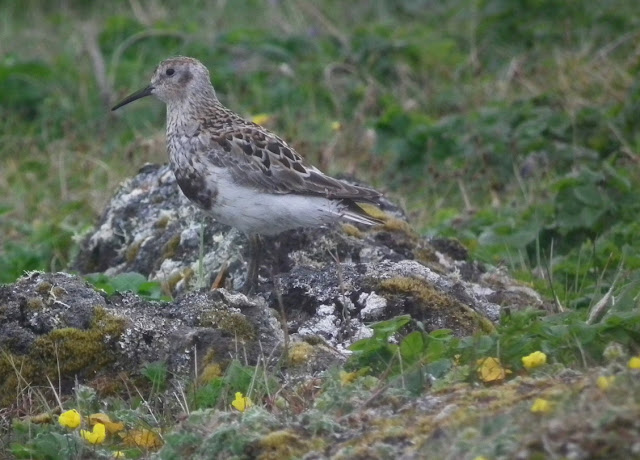 This photo should be good enough to help anyone with a field guide to North American birds identify the species. It looks very similar to a Dunlin, but don't be fooled, the Dunlin has a longer beak and darker legs. It was by far the most common shorebird on the island, both on the shore and inland. It has been a difficult species for me. I have had a hard time finding them and keeping the field marks straight in my head, especially in Winter plumage.. I wonder how many Rock Sandpipers I have seen in the past and passed them off as Dunlins? The Pribilof subspecies of 'Rock Sandpiper' is larger and has more white in its plumage than other forms. 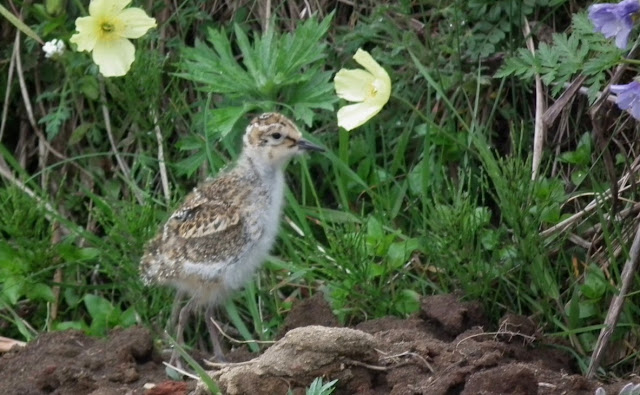 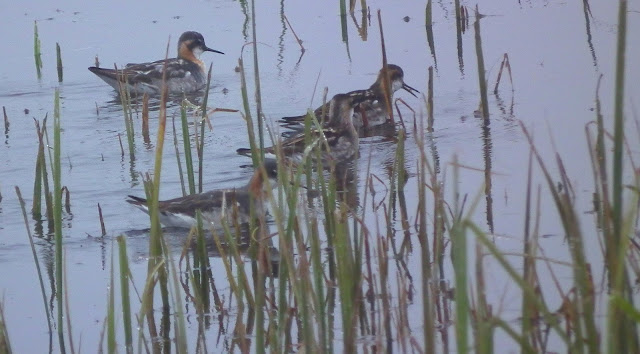 Among other species of shorebirds, we saw Red-necked Phalaropes. There were even more Red Phalaropes, (Grey Phalaropes in the Old World), but they stayed far away from us.

On the far side of the same marsh we saw a pair of Red-throated Loons. This one came close enough for a distant photo. Too bad it was so foggy. 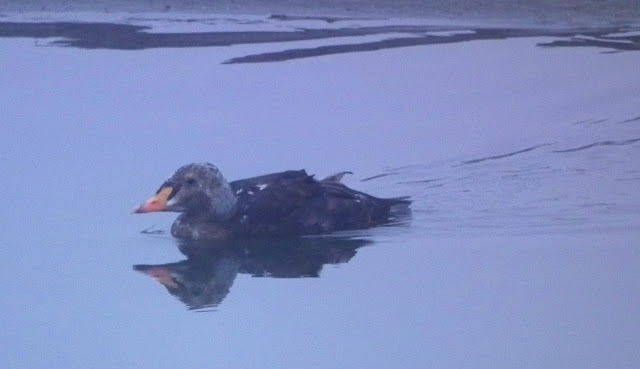 Another new bird for me was this moulting/sub-adult? male, King Eider. 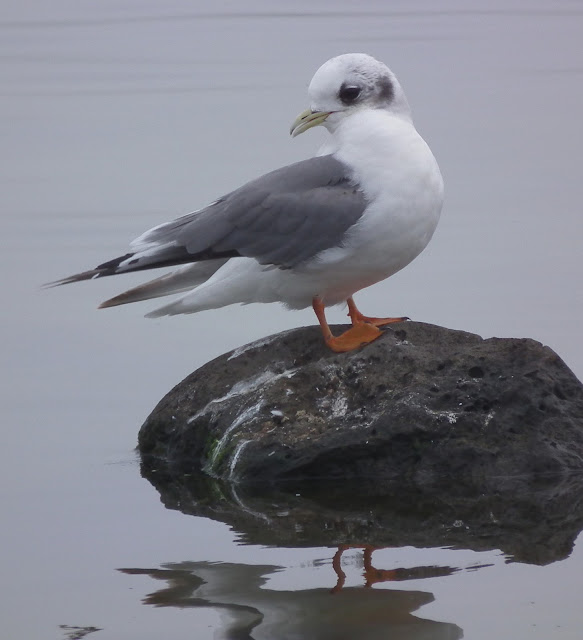 A bird that nests only on the Aleutians and the Pribilofs. It is rare and declining even on those islands. I'm not sure if it also nests on a few islands on the Russian side. This is a sub-adult, Red-legged Kittiwake. Another lifer. 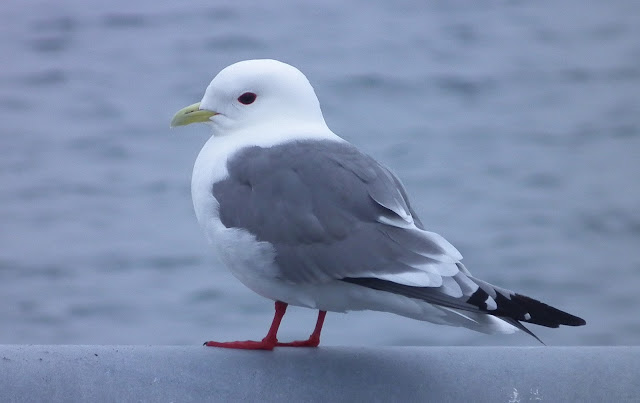 The adult is very cute for a gull. This is one of the first birds that I saw upon arrival to St. Paul. It was with some Black-legged Kittiwakes on the dock. 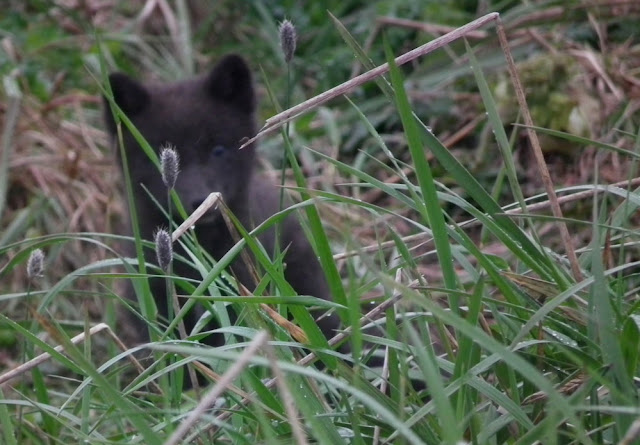 While we walked along the top of some seabird nesting cliffs, we spotted several Arctic Fox pups. 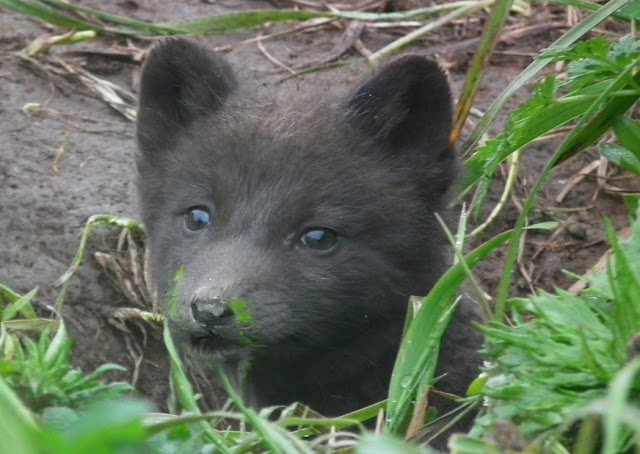 They ducked down into their burrow and poked up their heads often to keep an eye on us. 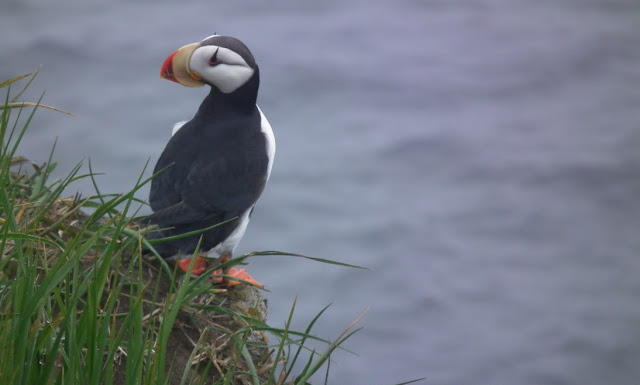 The real stars of the Pribilofs are the puffins. This Horned Puffin is a preview of the next post when we drop below the edge of the cliff. It was at times precarious and a little scary for me.
Posted by john at 8:40 PM

Hi John, I am no shore bird expert but your mystery bird looks like a Dunlin to me.