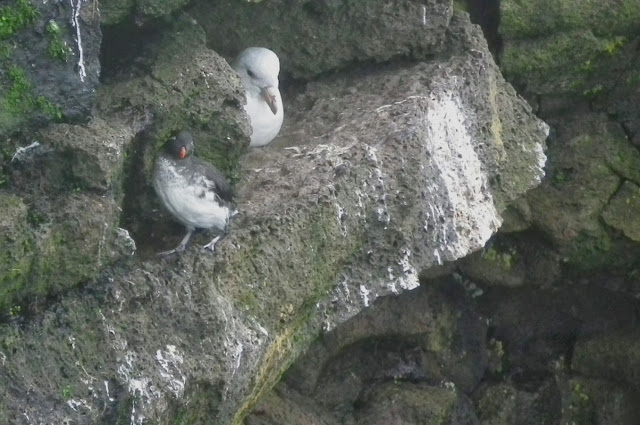 The odd little bird in front is not on the list. I have seen Parakeet Auklets before 2013. My number 10 new bird of 2013 is the bird that looks like a seagull tucked into its niche in the rocks. It is actually a Northern Fulmar, one of the tube noses. I believe that I have seen them before but I was never sure enough to count them. It is one of the great new birds that I saw in the Pribilofs this past July. 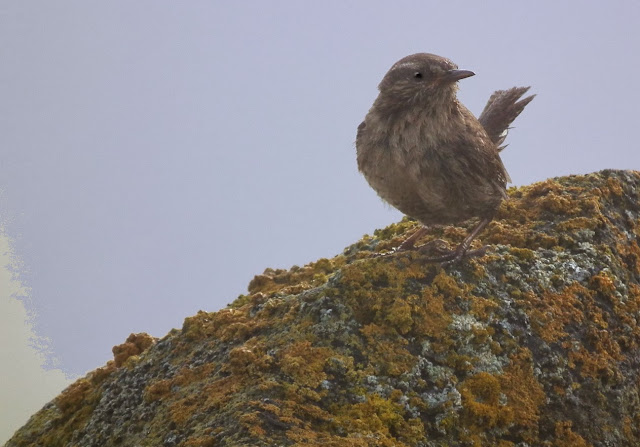 Another Pribilof lifer, Pacific Wren. These used to be considered a form of the widespread Winter Wren, which I have seen years before. Recently taxonomists have split them off into a separate species. My 30th species of wren, one of the least colorful of the bunch. New bird number 9. 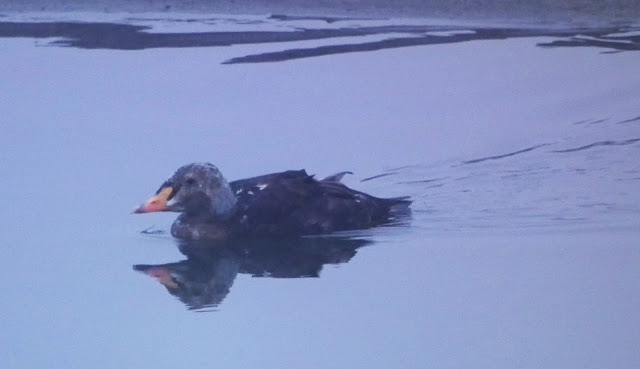 A bad photo of a bedraggled duck. Normally male, King Eiders are a magnificent sight. This sorry looking guy was also in the Pribilofs. New bird number 8. 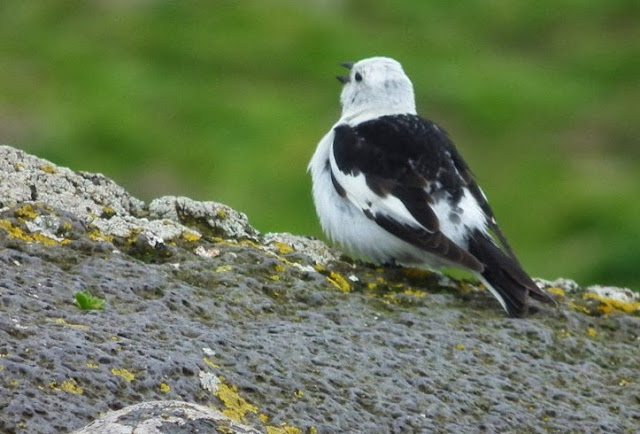 This bird on the Pribilofs has been, up to this July, my main Alaska jinx bird. That means that they are fairly easy to find in the Winter, but somehow I always missed out on seeing them. New bird number 7, Snow Bunting. 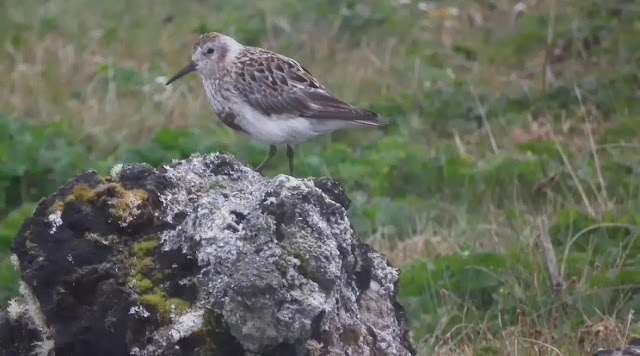 Although this bird was photographed on the Pribilofs, the first Rock Sandpipers that I saw were in Seward in January. New bird number 6. 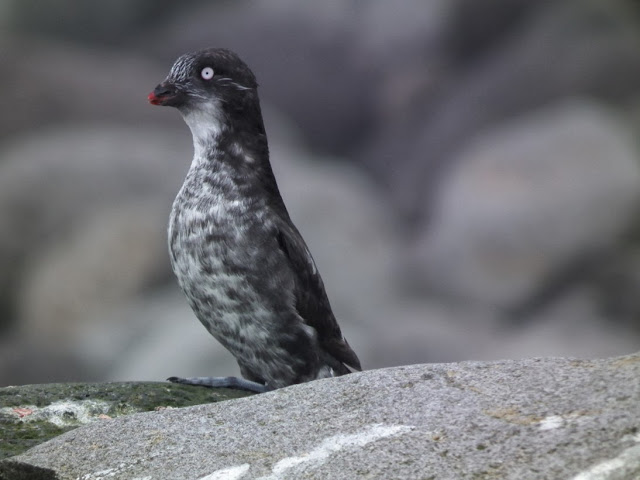 Probably the most delightful new bird of 2013, Least Auklet. These guys were nesting under the boulders on this beach in the Pribilofs. You could walk across the rocks and listen to the excited chattering of birds under your feet. You could sit down and soon Least Auklets would land all around you. Our guide said that if you sat still enough they would land on you. They did'nt quite understand what humans were. They were only about six inches tall. New bird number 5. 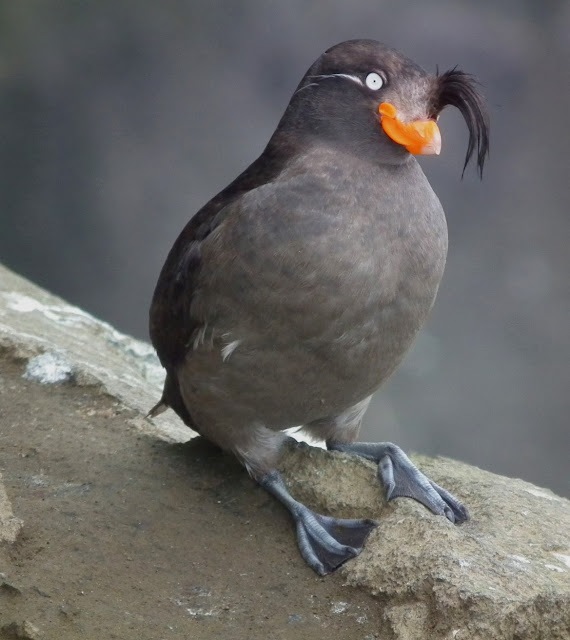 Another thoroughly delightful bird species. Crested Auklets are also very endearing. They nested on the precarious cliffs of the Pribilofs. Not at all fearful of people. New bird number 4. 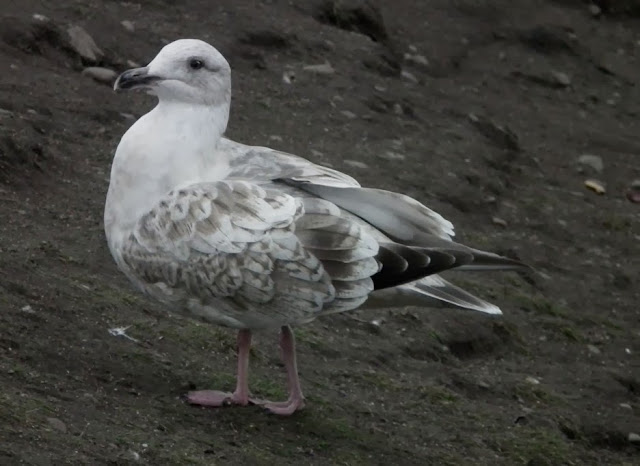 This bird earns the number 3 position only because of its rarity. Otherwise it is just another boring gull. Actually I really love gulls. This bird is normally an East Asian endemic. This is a sub-adult, Slaty-backed Gull. They do turn up somewhere in Alaska nearly every year. Usually on some remote island. This one was at a city park in midtown Anchorage. 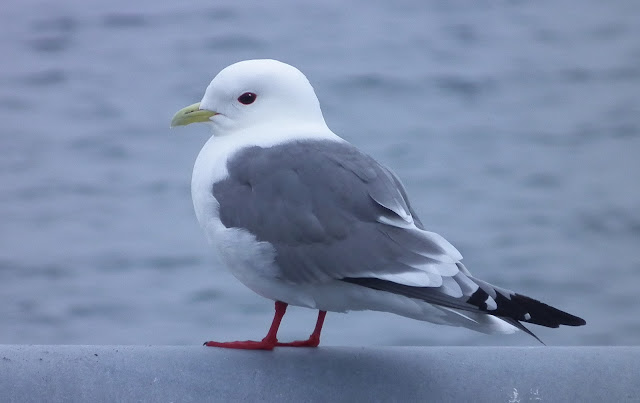 Another annoying gull. It is actually one of the most beautiful of all gulls. Red-legged Kittiwake. It is also very rare and declining. They are found only on a few islands in the far North Pacific, like the Pribilofs. New bird number 2. 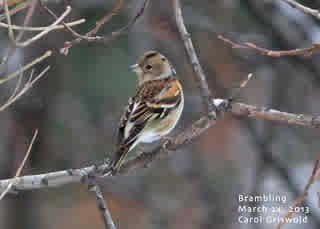 The number one new bird of 2013 is a Eurasian vagrant that I saw in Seward back in January, and again in February. I could not get a very good photo of the Brambling so I used, (with her permission) the photograph that Seward resident Carol Griswold took. There were at least two of them last Winter, and another one being seen in Seward this Winter. On another note, the Dusky Thrush, ( Asian vagrant) that was first seen in Anchorage 3 years ago is still present this Winter.   But wait.... 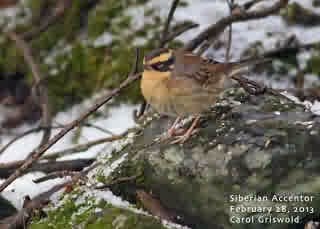 The A-1 new bird of 2013 is an Asian vagrant that showed up in Anchorage my first Winter in Alaska, in 1997. I remember standing around in sub-zero temperatures waiting for the Siberian Accentor to show up at someone's bird feeder. It never showed, and I suffered.
Since that time I have regretted that I missed such a rarity. This past January it showed up in Seward. I went there and found it near the Brambling. I also saw it again in February. Once again I could not manage to get a decent photo so I borrowed this photo from Carol.
There are a few other new birds that I saw in 2013 but could not photograph. They are, Hoary Redpoll, Red Phalarope, and Short-tailed Shearwater. All seen on the Pribilofs. 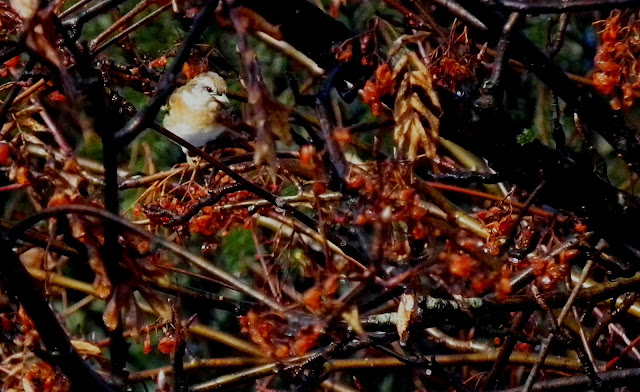 I'll end this post with my own bad photo the the Brambling in Seward.