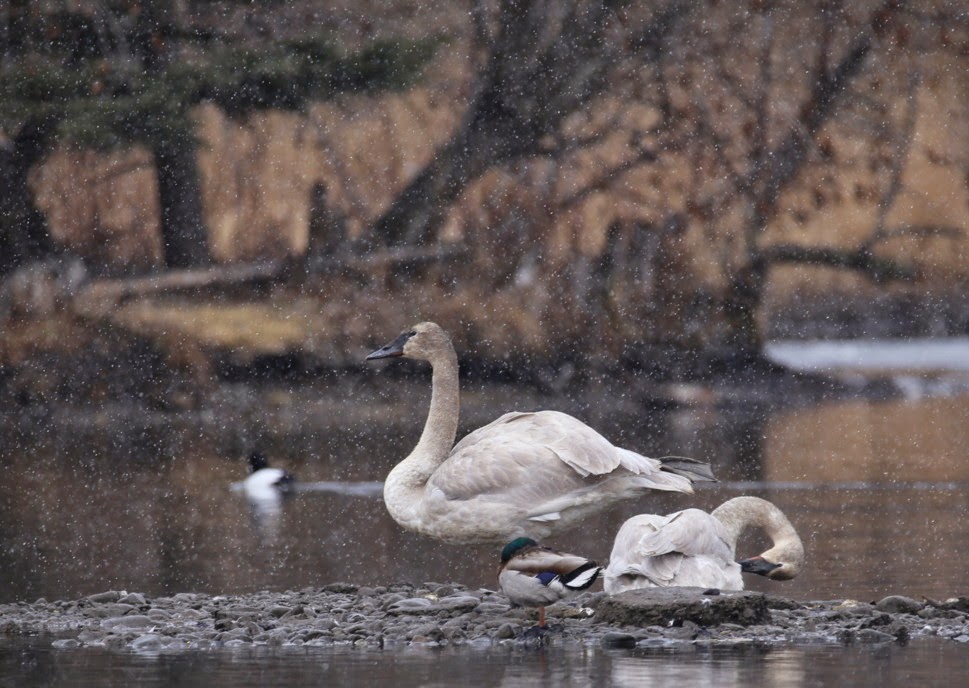 A little over a year ago I bought a new camera. I did not need a new camera, the old cameras worked perfectly well. I only bought the new camera because I read a review about the, Fujifilm HS-50 with its powerful zoom and its many nifty new innovations. I just had to have it, and it cost less than $500.00.
It is a great camera, so easy to use and so versatile. It does have its weaknesses. mainly being its inability to obtain very sharp focus at full zoom and often inaccurate exposures. 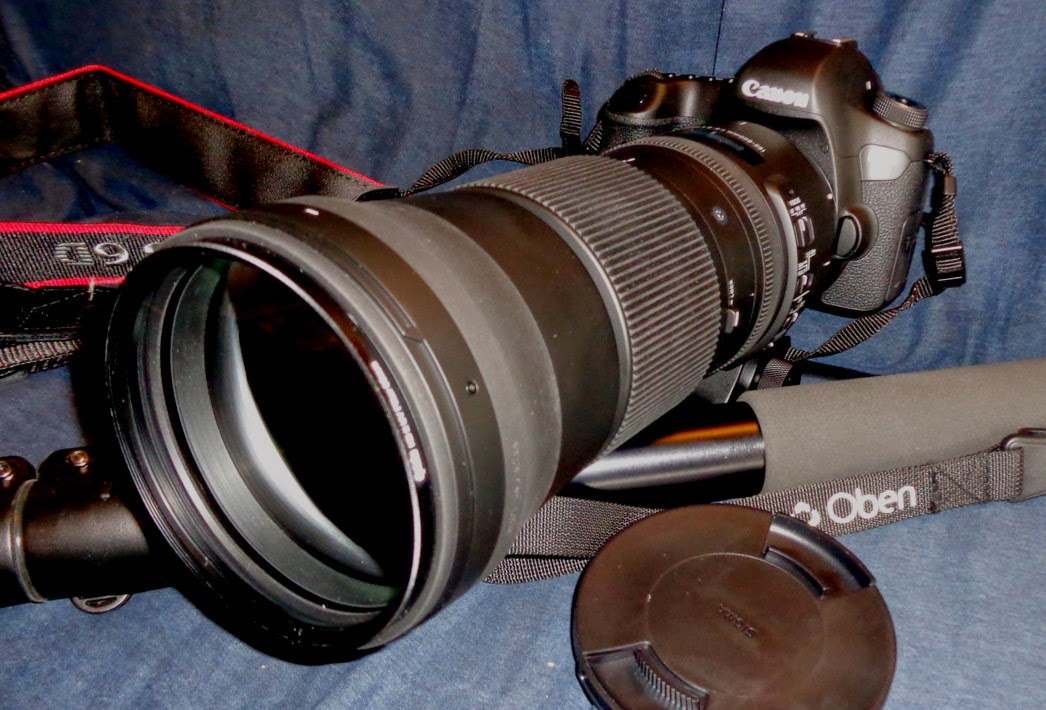 For the past year I have been saving my nickels and looking for a DSLR and a really sharp telephoto lens that I could afford. I have also been wrestling with my conscience because I knew that this would be a frivolous purchase that will never satisfy me for long.

This past week I made my choice. The photo above shows the new camera, a Canon 6D, next to my HS-50 with the zoom lenses extended. The lens is a Sigma, 150-600mm,5-6.3 DG OS zoom lens. The total cost for them was about, $2,600.00. They came with a bunch of extras like a monopod etc.
I'll write about the new lens first. I chose it because it seemed to be the best lens for my budget. It got great reviews for its sharp focus which was my main consideration. It is very sturdy, and very heavy.
I chose the Canon 6D body because it is a full frame DSLR; 20 megapixels with a slough of features that I will never use.
Its main competition in my thinking was the Canon 7D Mark ll. The 7D is an aps-c type of camera. In my ignorance I assumed that the full frame CMOS sensor of the 6D means a better quality image. I already know that is probably not the case. I should have gone with the 7D because it would have turned my 600mm lens into an 800mm lens. By the way my old HS-50 has a 1000mm zoom lens. 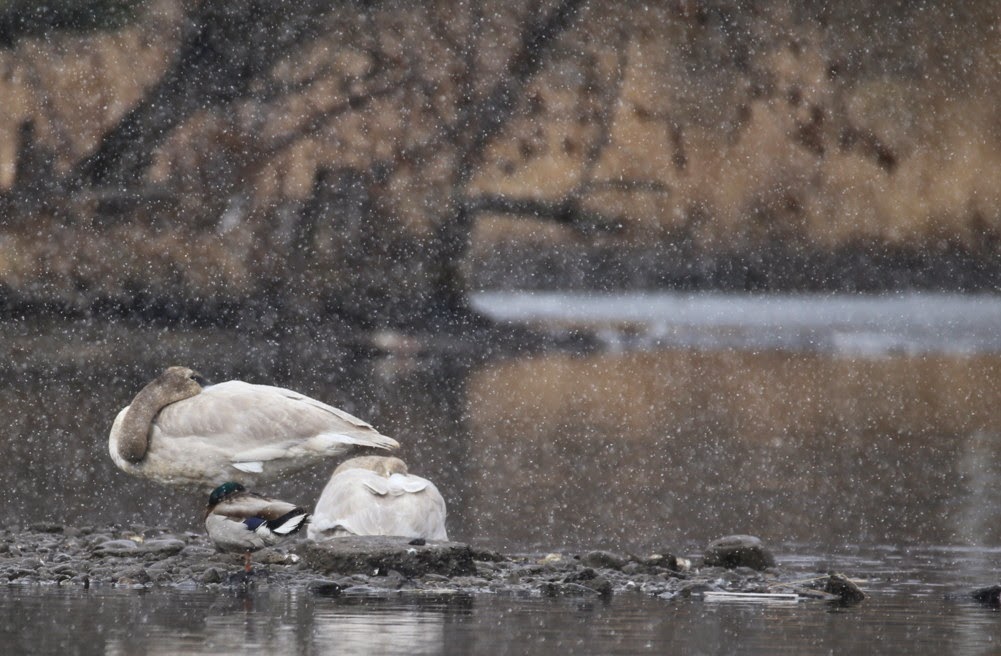 On Wednesday I took my new camera out to test it. The day was drizzling as I set out and turned to a snow mix as the day progressed. Not the ideal conditions for obtaining sharp photographs. I went to Spenard Crossing and Westchester Lagoon, (which is still frozen over). The swans were still present. 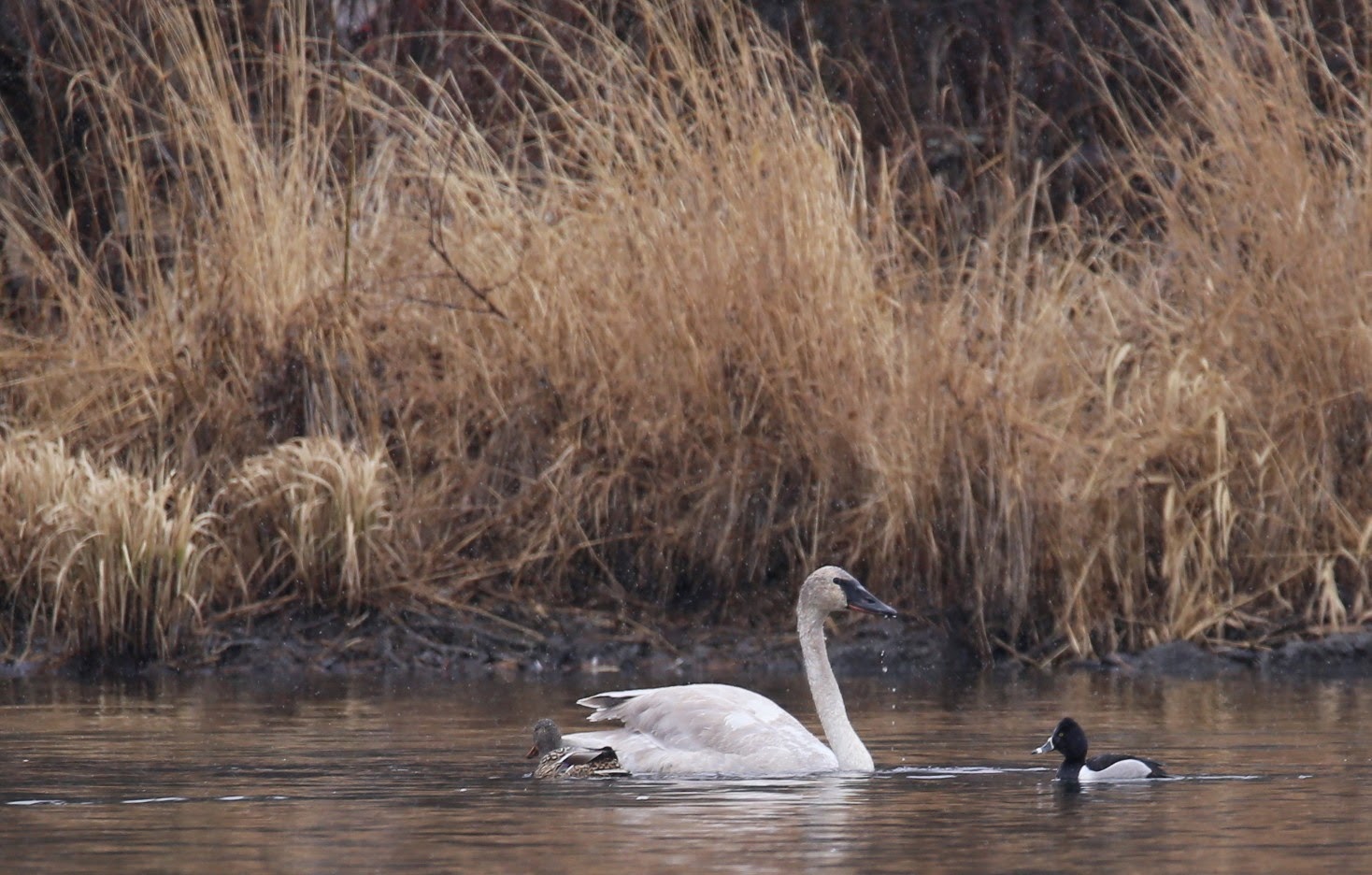 A new duck had arrived the day before. A single male, Ring-necked Duck. 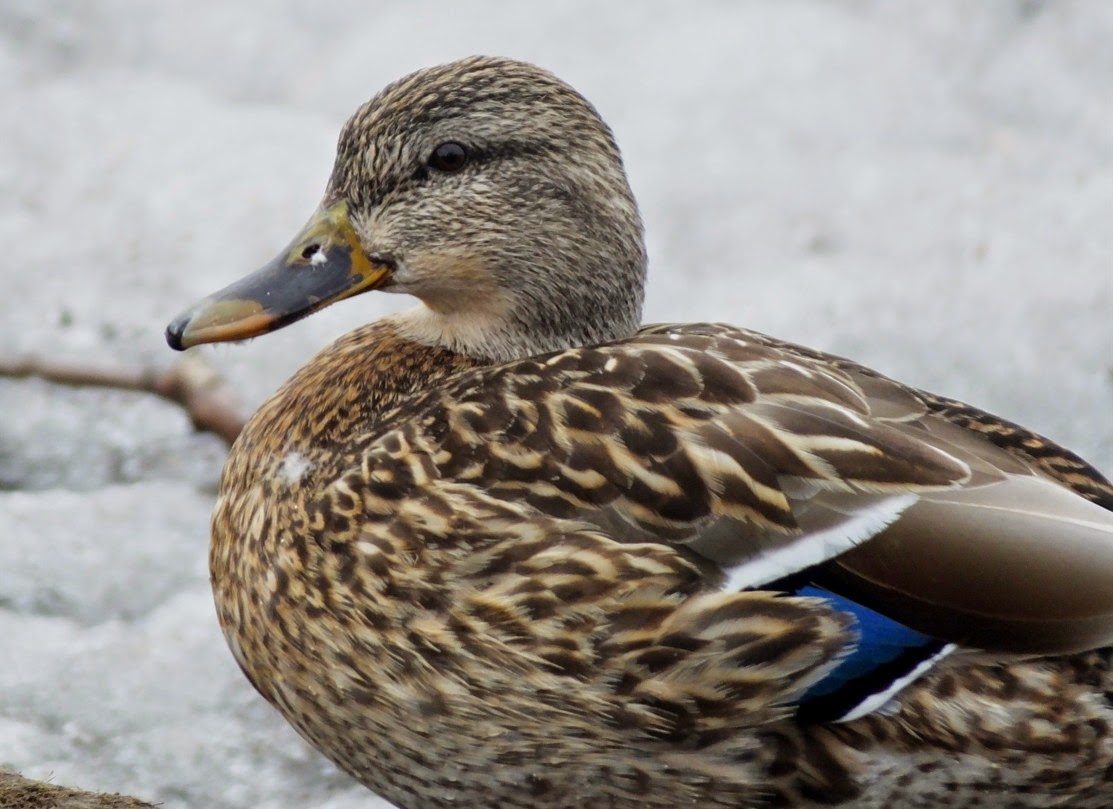 The week before that, I went to Spenard Crossing on an overcast day and photographed this Mallard hen with the HS-50. 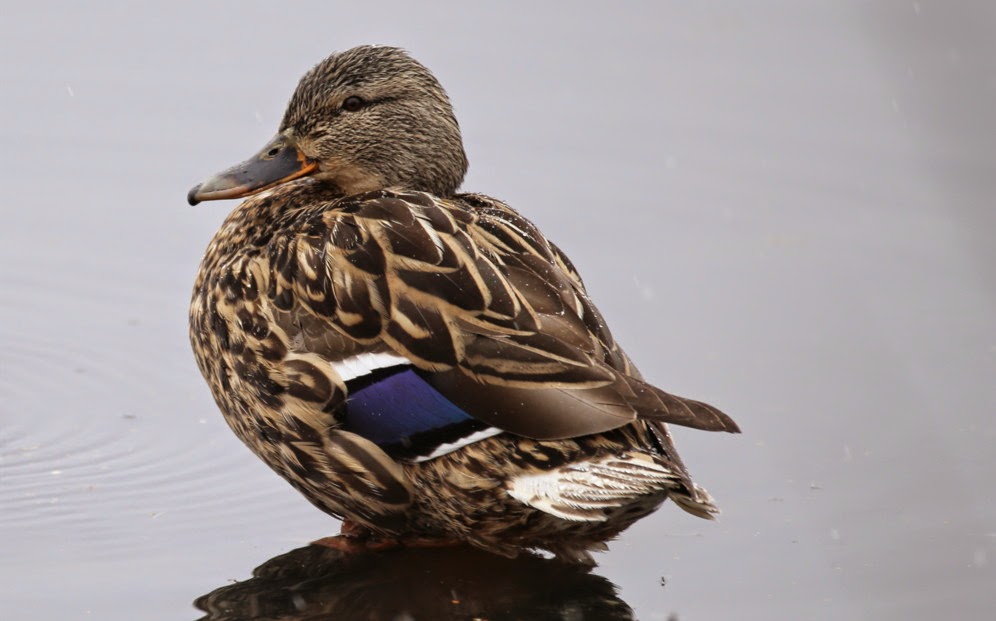 This week I photographed this hen with the new camera in even dimmer light with a fine drizzle in the air. The image is slightly sharper although it is not a direct comparison. The Sigma requires a monopod or tripod to hold it steady. 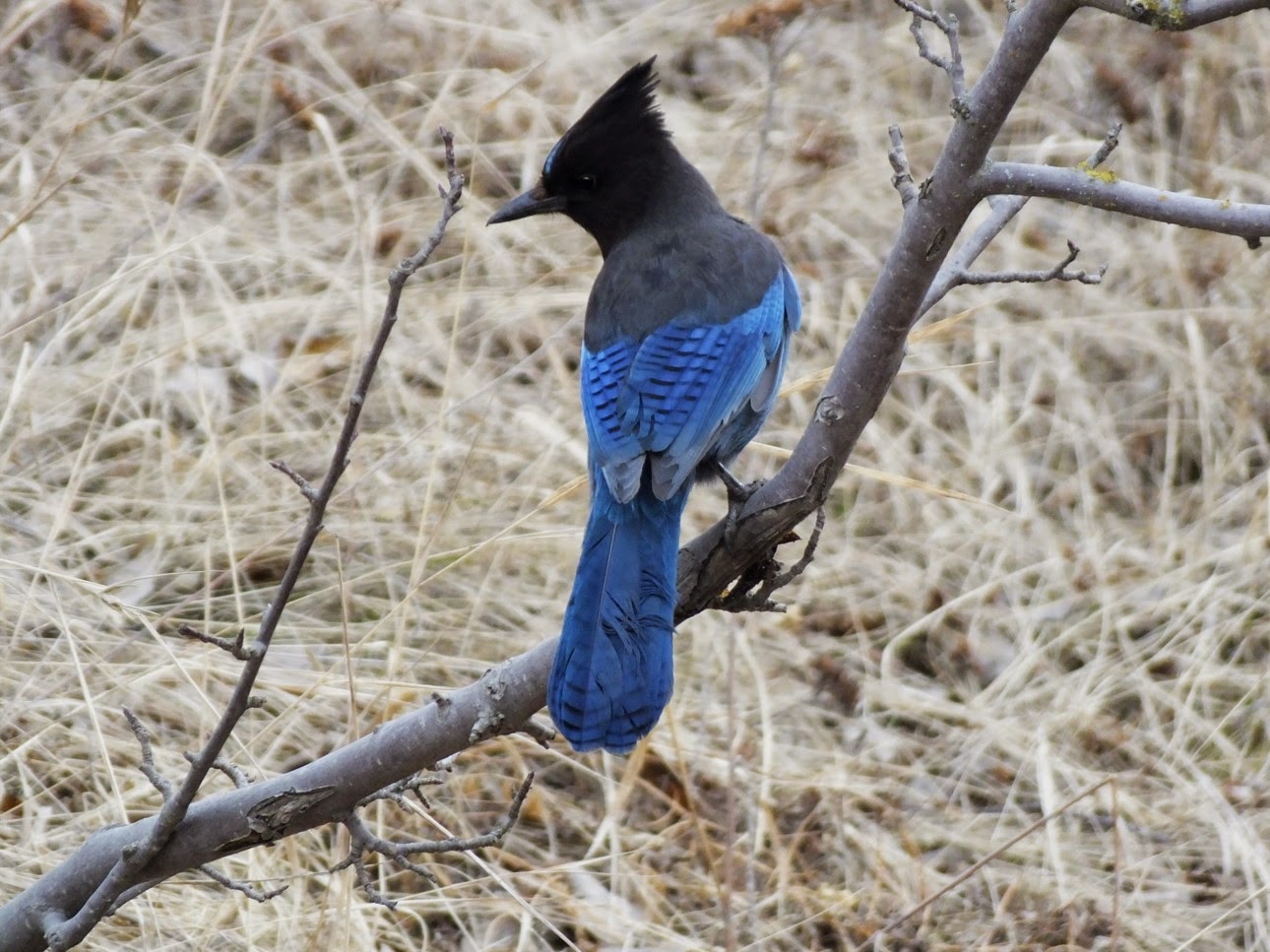 Last week I photographed this Steller's Jay in overcast light with the HS-50. 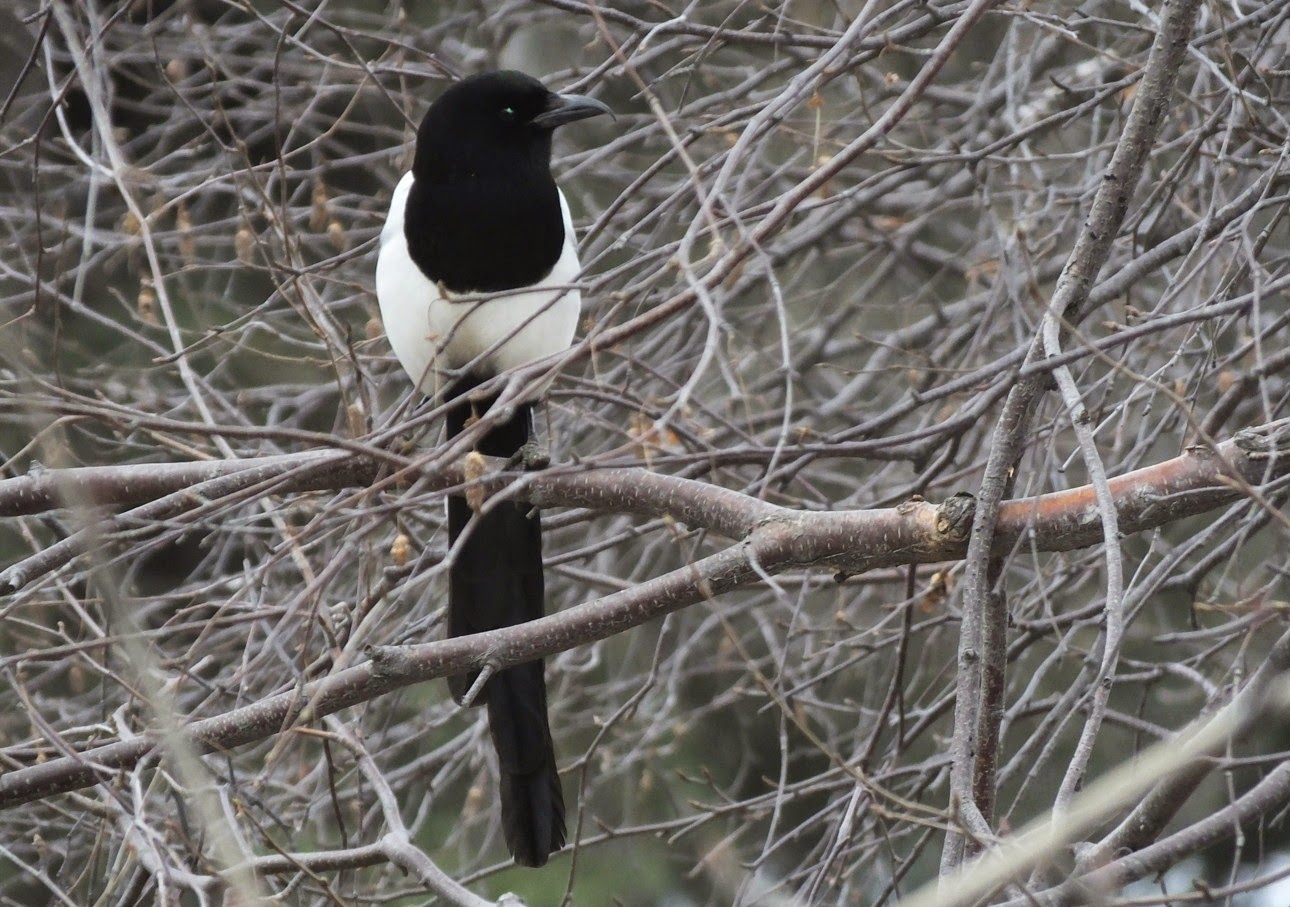 I also photographed this magpie with a slightly overgrown beak. 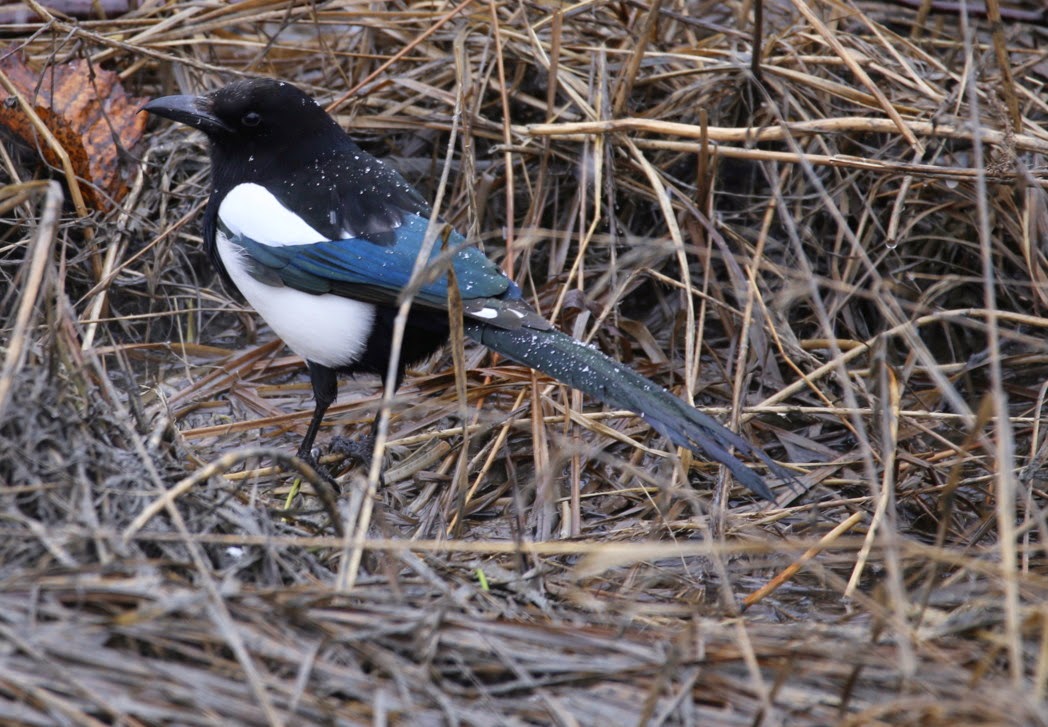 This is probably the same magpie shot with the Canon a week later. 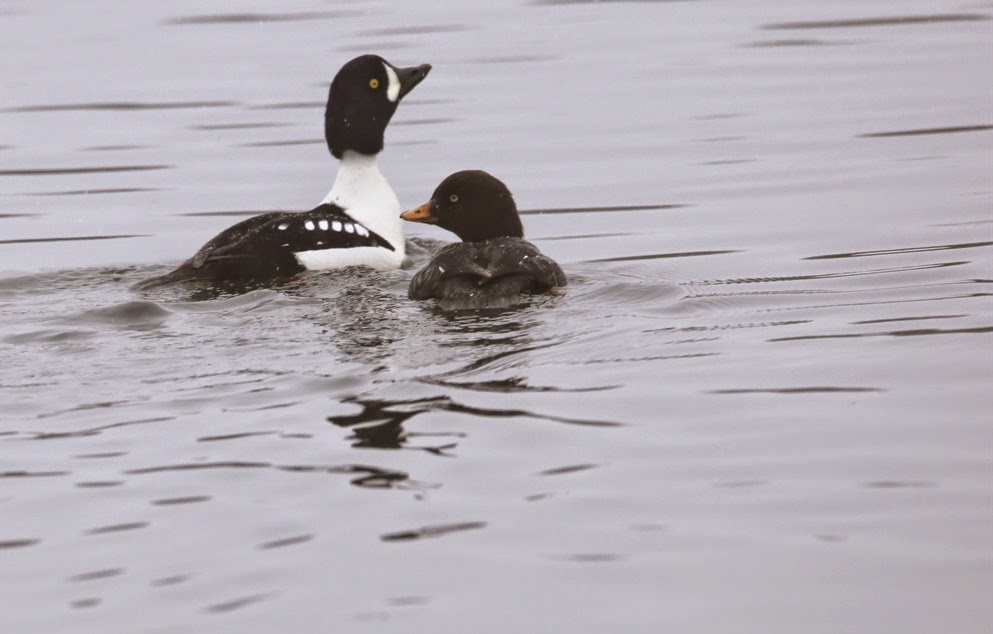 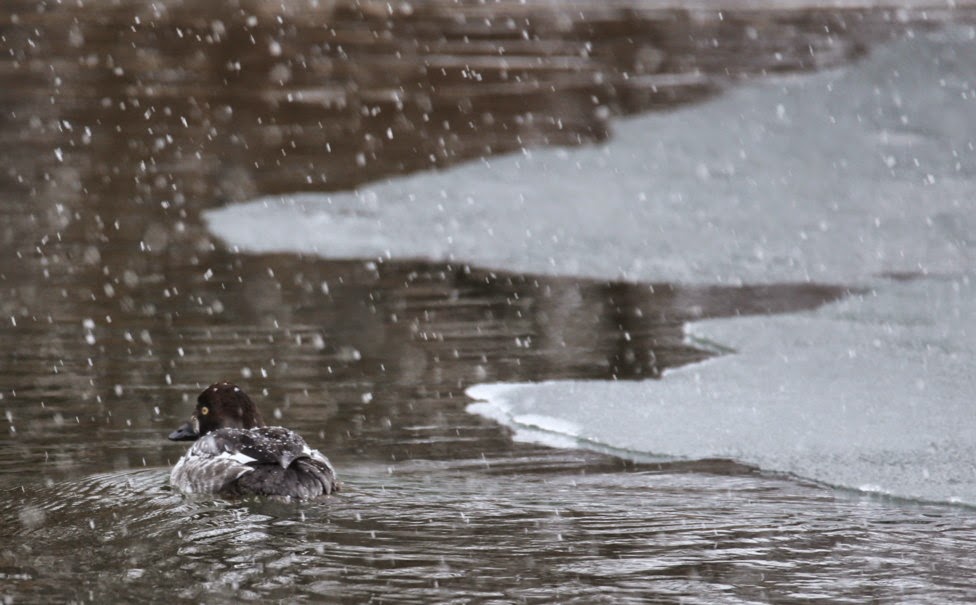 The precipitation never let up and finally I just gave up and went home.
My preliminary impressions are that the HS-50 is 40% more powerful than the Canon and so much easier to manage. However the Canon does a much better job of getting exposures right. It is too early to know if the lens sharpness is significantly better, The Canon has 20 megapixels compared to the HS-50's 16 megapixels.
The Canon will never replace the HS-50 entirely. I will have to use the Canon more before I decide whether to put it up on ebay or Craig's list. My hope is that some camera manufacturer will come out with a superzoom point and shoot with truly sharp focus. Then it's goodbye to heavy lenses.
Posted by john at 12:22 PM

Congratulations for you new big camera John,i observe that you photographs improve in clarity of details and resolution,use you a good tripod?.

Thanks Marc, I used a monopod with these photos. I will bring a tripod next time to see if it does a better job.

Tripods are useful - I lean on mine when I get tired !