A Strange Duck, An Old Mine, and a New Camera 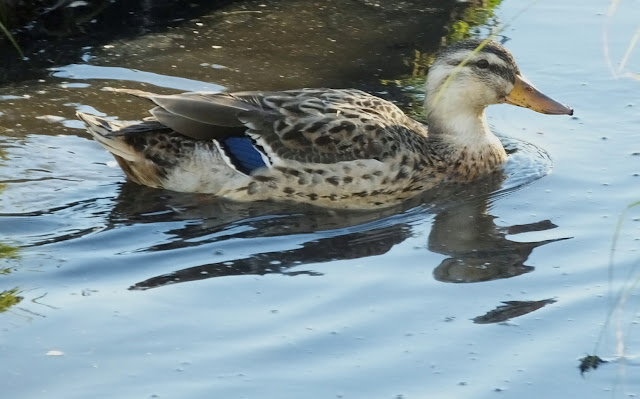 First the duck. It was at Spenard Crossing. Right now ducks are going through their annual moult. This is clearly a Mallard Drake. It is unusually pale. The other Mallard Drakes are much browner. I wonder what it will look like at the end of its moult.

On Wednesday Dan and I took advantage of what probably is the last really nice day of the Summer. We went up to Independence Mine State Park near Hatcher Pass. 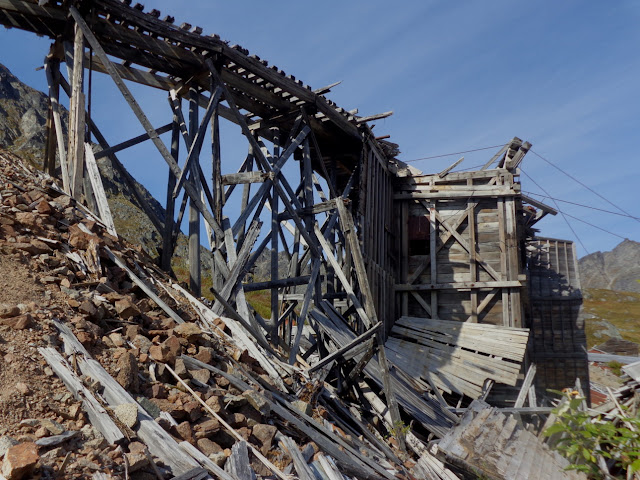 There are some pleasant hiking trails around the mine that was abandoned in 1962. 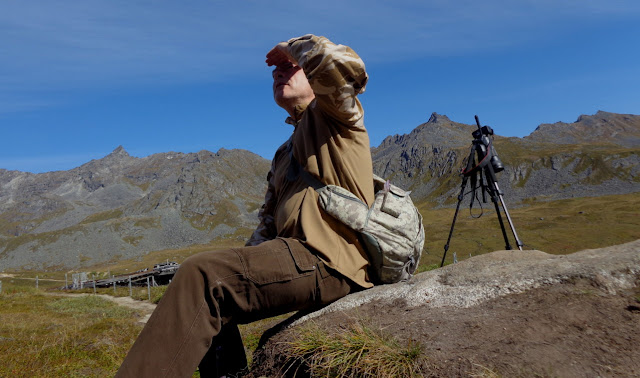 I brought my brand new camera, (behind Dan). It was a pain to lug around. 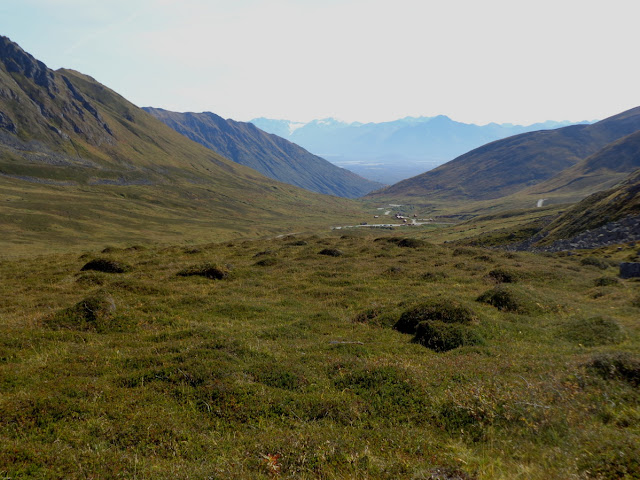 If you look real hard, you can see part of Knik Glacier in the far distance. The small town of Palmer lies out of sight, in between. 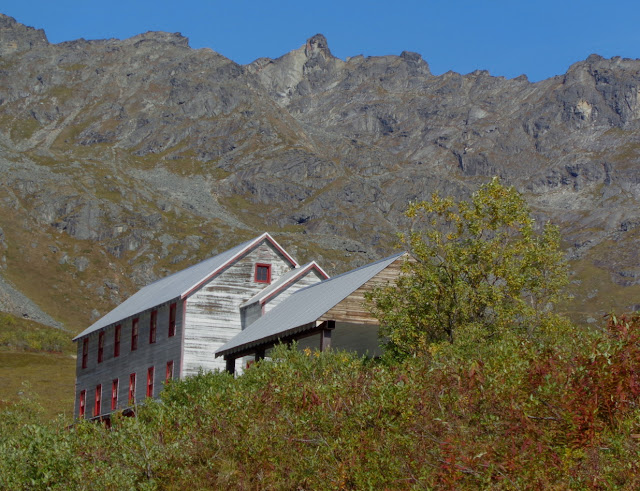 The mine is nestled among some rugged slopes. We were hoping to spot some, ptarmigan, Hoary Marmots, and Collared Pikas but we missed them. 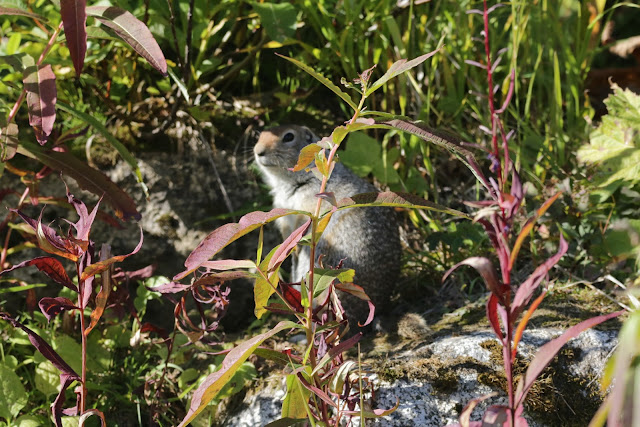 We did see a few Arctic Ground Squirrels. The camera focused on the Fireweed instead of the squirrel. 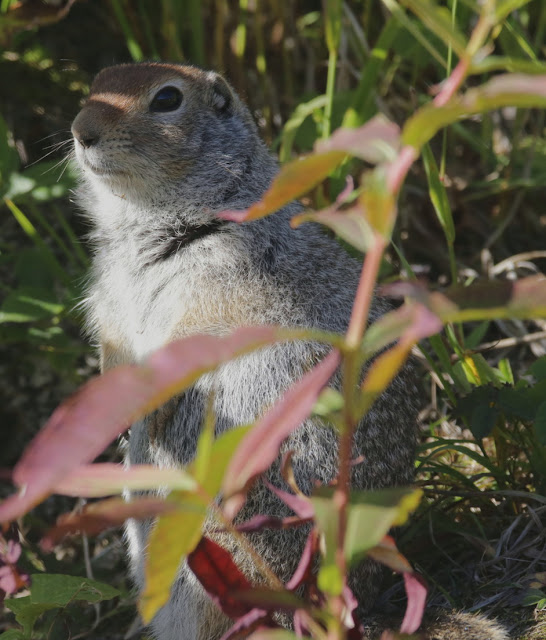 This time I got the camera to focus on the right thing. The light was very harsh with the stark contrast. I did what I could to fix it. 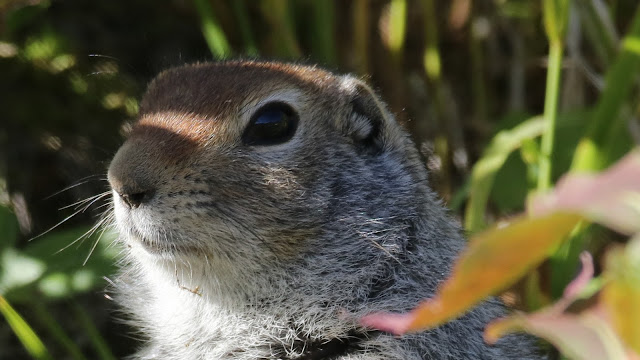 An extreme crop, (compare to the first, un-cropped photo). The high megapixel CMOS sensor of the new camera makes it look pretty good. 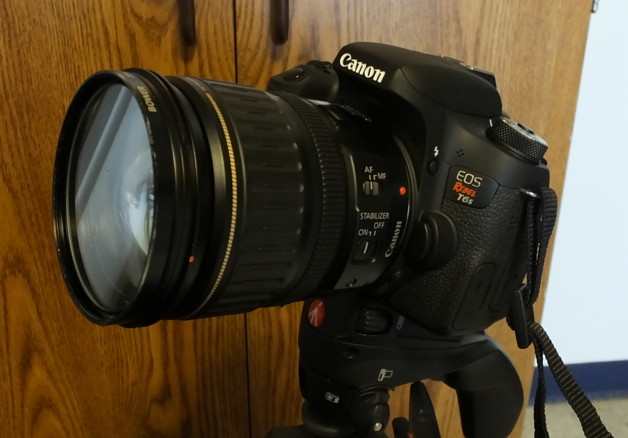 Regular readers of this blog will remember that I purchased a full frame Canon 6D several months ago. I wanted to make a jump from my point and shoot, Fijifilm HS-50 to a nice DSLR.
It was 20 megapixels as compared to the 16 megapixels of my HS-50. Turns out that the higher megapixel count was just about its only advantage. The HS-50 has a more powerful zoom and is so much more versatile. Built in flash and tiltable lcd screen are two important things the Canon lacked.
My main complaint was the heavy zoom lens that requires a tripod to use. It wears me out to carry it for any distance.
When I read the impressive reviews for the brand new Canon Rebel T6s I went down to Best Buy to check out this top of the line Rebel in person. It was truly impressive to me. Far superior to other Rebel models. 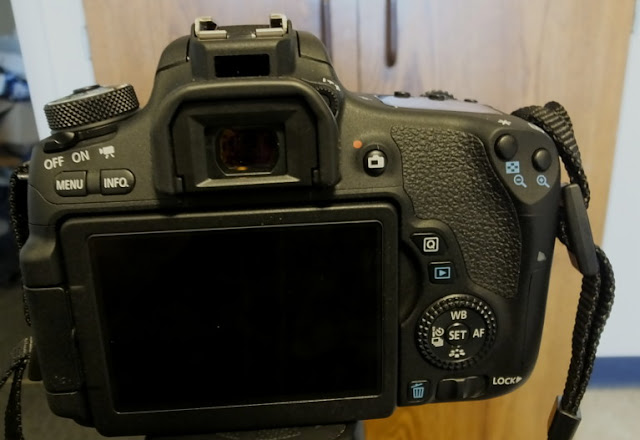 So I sent the 6D back and picked up the much less expensive Rebel. It features 24 megapixels, Wifi, GPS, pop up flash, a top lcd screen like the 6D and much more. It can only shoot 5 frames per second in burst mode, ( my HS-50 shoots up to 16 fps). Oh well. I seldom use that feature anyway. 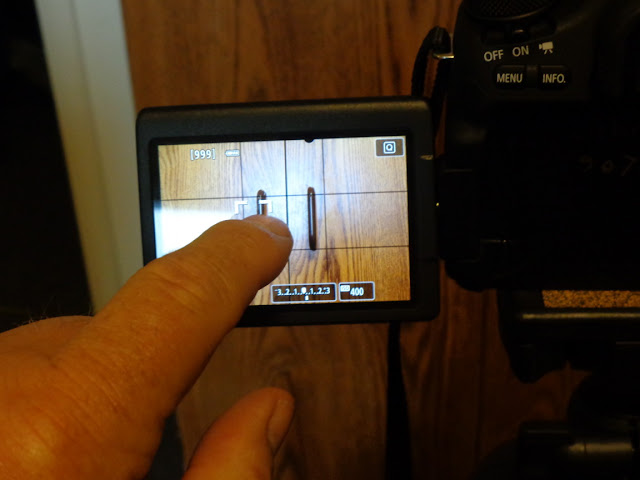 I am still reading the instruction manual but so far my favorite feature is the  tiltable touch, lcd screen with 'touch shutter'. This is a wonderful thing that other cameras lack. Touch Shutter enables you to touch the exact spot where you want the camera to focus. The camera then focuses and snaps the photo.
You can enlarge or shrink the focus area with your fingers. If you put the camera on a tripod in poor light  then you touch the spot, drop your hand and let the camera focus and shoot. That eliminates camera shake.
You can also access the menu and change the many features with a touch or swipe of the screen, no fumbling with dials and buttons. If you want to use manual focus you can spread your thumb and forefinger to enlarge the exact spot you want in focus and then manually get a very precise focus. Theoretically I can operate the camera with my smart phone using the camera's Wifi. That however is well beyond my technical abilities.
I still have to lug around the heavy zoom lens but I am starting to really like this new camera. It is an APS-C camera that makes my 600mm lens into about 850 or 900mm.
Posted by john at 12:21 AM

The tillable LCD screen is a really useful feature. I've tied myself in knots in a portable hide trying to see where I was focussing, a tiltable screen could have saved me.