Several years ago I admired a Degas painting of ballerinas practicing in a dance studio. The ballerinas were at the top of the painting, and most of the painting was the shiny dance floor. I tried to find that painting to include it in this blog post, but I could not find a copy of it anywhere. It may have been done by another artist in the style of Degas, I dont remember.

I do remember that it inspired me to make a sketch. 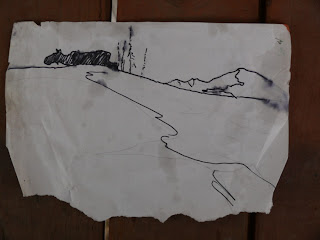 This is the sketch. It's almost sacreligeous to compare a beautiful Degas painting to a lumbering moose in the snow. This is the inspiration that I got from the painting. Anyway, I filed the sketch away, and promptly forgot about it. A few days ago, the sketch turned up again so I decided to do something with it. 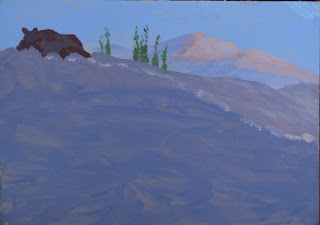 First I did a quick color study to work out some tonal values. 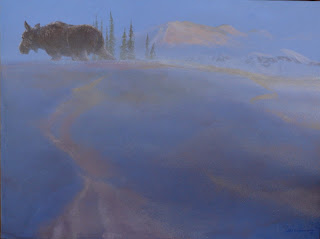 Finally I painted an 18x24" canvas of a typical bleak winter landscape. There is stark beauty in snow blowing across the landscape. This painting captures the mood, but it will never sell. I already have plenty of works that I like, but can't sell. I'll set this one aside, and probably paint over it someday. Oh well.

The summer art season is over, here in Alaska. Painting new work continues all year at a liesurely pace. Since I have plenty of inventory for next summer, there is no need to push myself. These paintings are my latest efforts.

The top painting is a 16x20" acrylic called, Dinner is Served. It is a Peregrine mantling it's kill, an Upland Sandpiper. The setting is the open landscape of the Alaskan tundra. The inspiration for this painting came from a photograph of a Merlin on a pigeon that it killed in Anchorage. I did'nt take that photo. It was taken by a young woman, Amber, who works in the photography studio that professionally photographs my artwork. The photos of art on this blog are my own pathetic photos. Amber does much better work.
The bottom painting is an 8x10" acrylic called, Snipe, Snipe. I'm not real sure how likely it would be for someone to see two Snipe together like this. I've only seen them as single individuals. They come together for courtship in the early springtime. I just completed this painting about two hours ago. I like it well enough. As I have stated in other blog posts, I love to paint cryptic birds like sparrows, shorebirds, and female ducks. I also enjoy buildling up weedy fields, and grasses. They are majestic landscapes in miniature.
Posted by john at 4:08 PM No comments:

When I start a new painting, I always try to make it the best painting ever done by anybody. Invariably I am disappointed by the reality of the way it turns out. Some paintings do turn out well, but most of them have some real flaws. If I'm lucky, a painting will sell right away, and I wont have to see it again.
Most paintings do not sell right away. Some of them get recycled, (painted over), and no one sees them but myself. Others get put away for later refinements, and the best paintings go to the galleries. If a painting languishes in a gallery for several years without selling, it ends up being returned to me.
Then I have to decide what to do with it. I can give it to a friend or relative. I can donate it to some local charity, or I can scrap it altogether. Some of them still look pretty good to me, but I see some way to improve on them. These paintings get re-worked. All of the following paintings did'nt sell for some reason or other, so I tried to fix them. 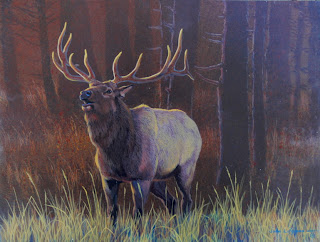 The Boss, 12x16" Elk are always a popular subject, and most of them sell easily. This painting came out well and I expected it to move without a problem. I sent it to a good art gallery in Fairbanks, Alaska. There it sat for two or three years, until they sent it back. 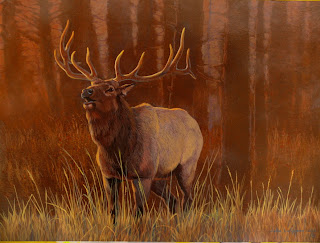 Although I was happy with the original version, I decided to play with it some more. I lightened the background, and built up the grass immediately around the elk. This painting looks good to me, and I expect it to sell soon. 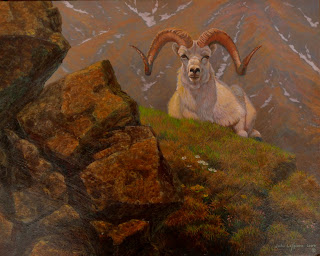 King of the Hill, 16x20", Here is another painting I liked, but I had problems with the rocks on the left of the painting. Since the ram looked good, I thought it would sell. It did'nt, so I re-worked it. 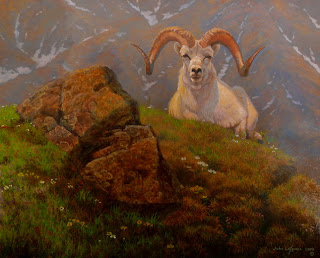 First I changed the tone of the mountains in the background, hoping to bring out the ram's horns a little. Then I reduced the size of the rocks, and added some more grass with flowers. These are not significant changes, but I dont know what else to do. 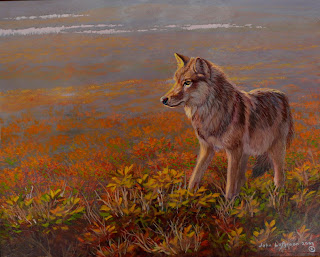 Tundra Vistas, 16x20", For some reason, I used looser brushstrokes on the wolf than I usually do. This painting got chosen as a 2008 conservation stamp for the Province of Manitoba, in Canada. I thought that distinction would help it sell. It did'nt. 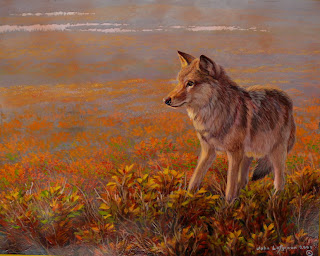 When I got the painting back, I realized that the eye looked too big, and the ears looked too small and close to the wolf's eye. So I fixed those things. I also raised the wolf's back, and slightly moved one of the back legs. 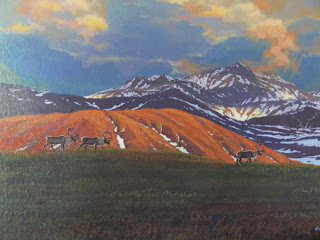 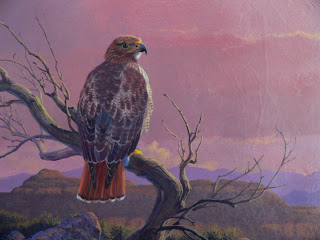 Redtail Sunset, 16x20", I was never happy with this one, but I did like the color of the sky, so I did'nt paint over it. 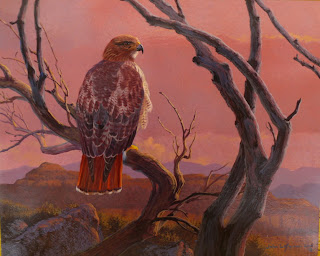 Finally I decided to try to improve it. Besides adding more tree limbs, I fixed the hawk's face to make it look more natural. It still looks contrived, and may never see the light of day. Time will tell.