The Quest for the Legendary Harpy

Most tourists who visit the Amazon book a tour from their home country. Those of us who are more independent minded save money by just showing up and seeing what can be worked out last minute. Gary and I went to Misahualli first and hired a guide there for three days. Afterward we went back to the larger town of Tena and walked into a local travel agency there.
We explained that our principle interest was in seeing birds. The man behind the desk pointed to a poster on the wall of a Harpy Eagle and asked if we would like to see that. He explained that there was an ecolodge called Gareno that guaranteed it's guests a view of a Harpy Eagle.

It so happens that we had already heard of the place and we were delighted that this tiny travel agency could arrange a visit for us. Wow, the chance to see one of the prizes of the bird world. We could hardly wait to leave the next morning. Gareno is a very rustic place that lacks electricity or comfortable beds etc. It lies in the middle of Huaorani indiginous territory. The lodge was established by an illiterate but industrious Lowland Quechua man who leases the land from the Huaorani Tribe. The founder's son Sandro is the main bird guide at the lodge, and is a truly dedicated, even passionate birder. No one at the lodge speaks a word of english but they are eager make their guest's stay an unforgettable experience.
There is a rough road that passes by a guarded gate at the entrance to Huaonani lands and comes to within about a quarter mile of the lodge. That road gets an average of 1 or 2 vehicles a day, and passes through primary rainforest the whole way to the lodge. 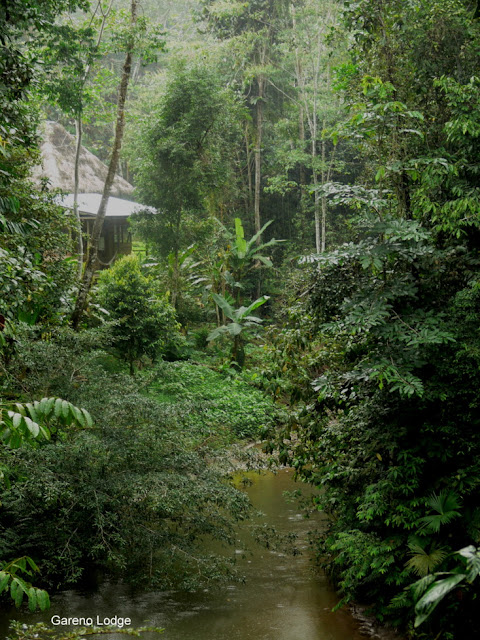 The word Gareno means Piranha in the Huaorani language. The lodge is nestled down in a sheltered hollow below the road. The path from the road to the lodge is steep and very slippery. There is a small Huaorani village about two miles away. Other than that, it is very remote from civilization. 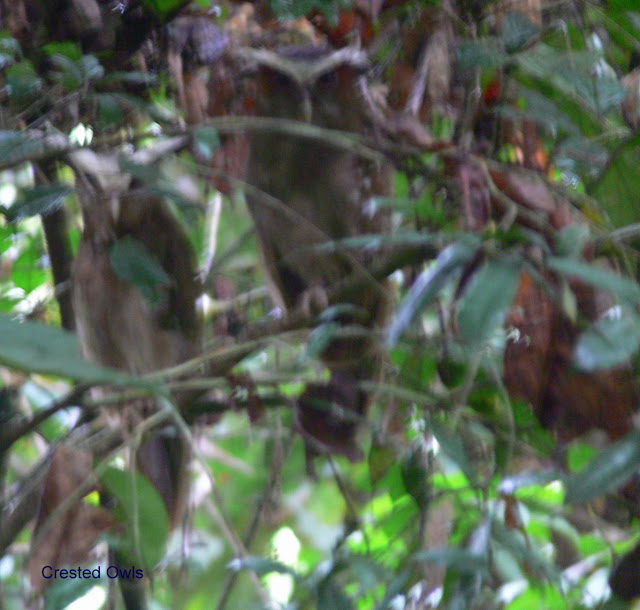 The first birds that Sandro found for us were a pair of roosting Crested Owls. They were just below the road before we reached the lodge. This is such a blurry photo because the owls were in deep shadow and I could not use my flash. The shutter speed was set at about 2 seconds. 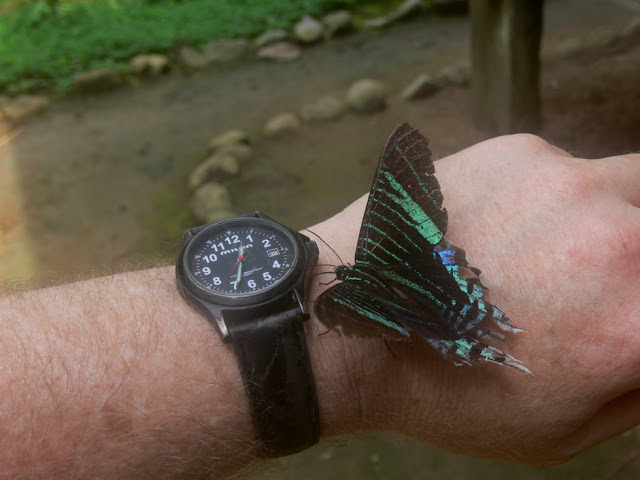 This butterfly at the lodge obviously appreciates a fine timepiece. 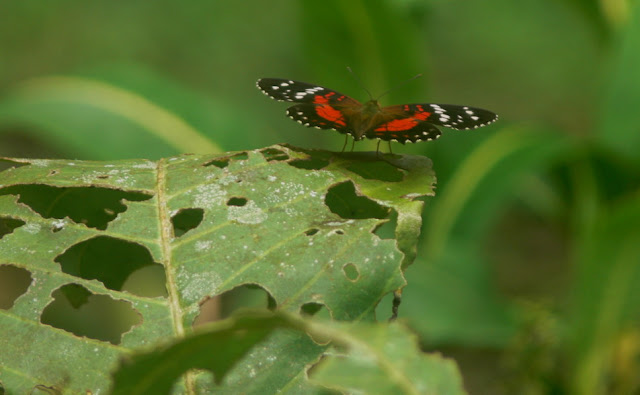 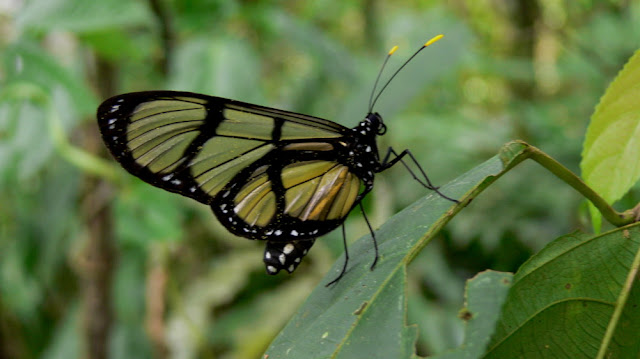 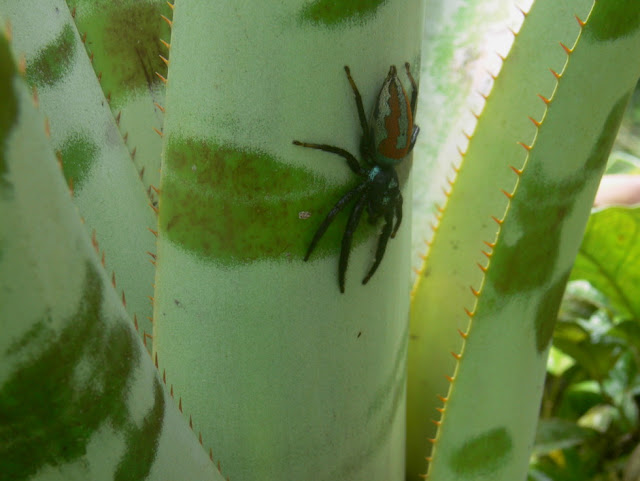 A large and colorful jumping spider on a bromiliad. 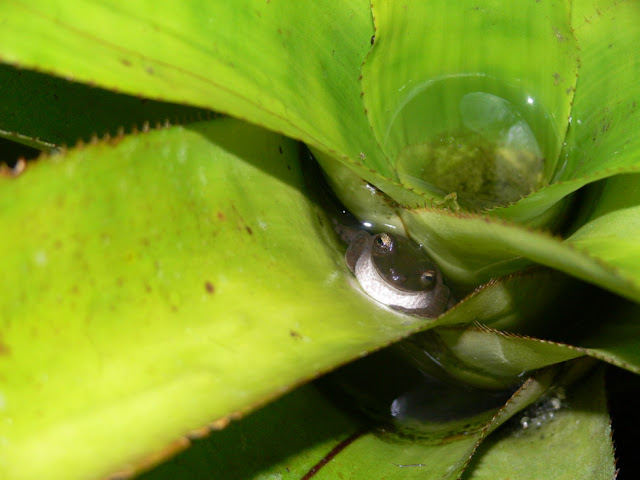 This frog was croaking from a nearby bromiliad.

A Brown Jacamar catches an insect from mid air. 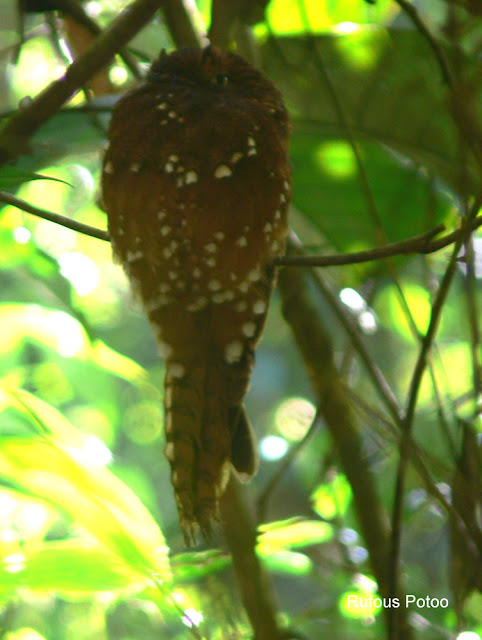 The smallest, and probably rarest of the potoos is the Rufous Potoo. We would have had no chance of finding this bird without Sandro's keen eye. It stared at us drowsily, but warily with one yellow eye. 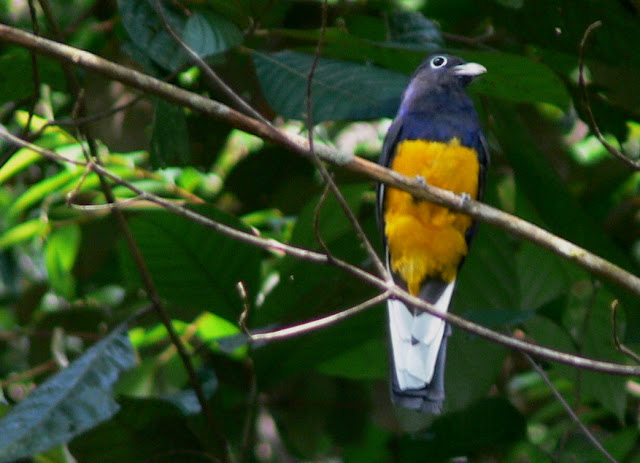 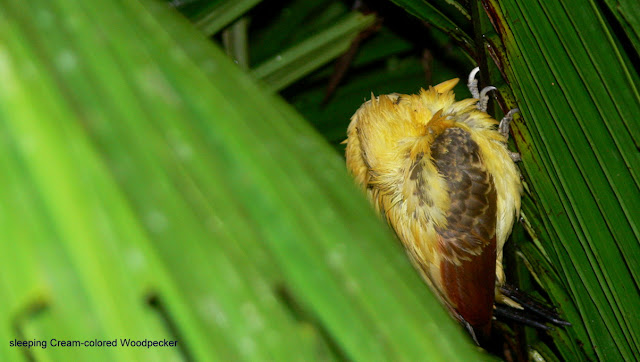 Just outside of our bungalow there was a roosting pair of Cream-colored Woodpeckers. This photo was taken at night from the back deck. 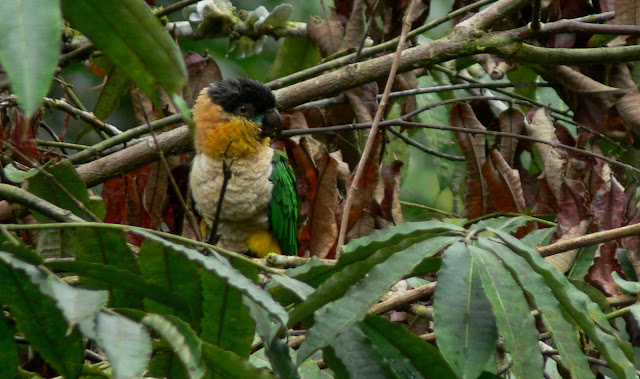 The Black-headed Parrot is exotic in appearance, not to mention colorful and cute.
Sandro told us that there was a trail that led to a Harpy Eagle nest about 3 kilometers away. He said that the eaglet had already fledged but that it was staying nearby it's nest.
We set out eagerly in the first light of dawn on the morning after our arrival at the lodge. The trail was steep and muddy the whole way. Up one hill, down the other side. Over one fallen log, under the next one. On and on, far more than three kilometers.
In my youth it would have been good workout, but with my weak heart it was an excruciating ordeal. I had to rest constantly, and was close to passing out much of the time. We were seeing great birds along the way but I barely noted them in my exhaustion. Some I ignored altogether.
When we finally reached the nest tree, mom and dad and junior were nowhere to be seen. I was bitterly angry and collapsed onto the ground in near despair. Sandro was bright and chipper and quietly slipped off into the jungle.
Several minutes later he was back, motioning for us to follow him. I was so tired that I almost refused to move. He led us for about a hundred yards further into the forest and pointed up into some very tall trees.
I could see nothing at all because it was raining and my glasses were hopelessly fogged up. Sandro took Gary's spotting scope and fixed it onto the bird. Then we took turns looking at the magnificent immature Harpy Eagle. I could not photograph it at all but Gary got a digiscoped image of it. 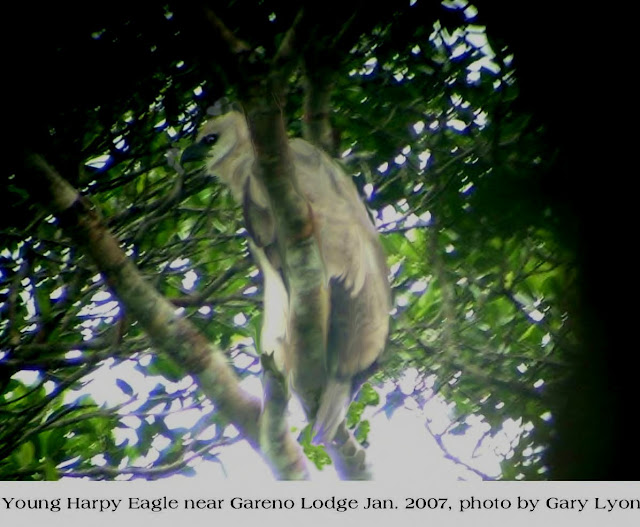 Young Harpies are nearly pure white and have short crests compared to the adult birds. It was certainly a highlight sighting of my birding career. Thank you Sandro. The long obstacle course back to the lodge took about three and a half hours but I knew I could make it just on the elation of a successful quest. We saw many great birds during our stay in the Ecuadorian Amazon.
Posted by john at 5:46 PM

I dont remember seeing any tadpoles but I believe there were eggs in the lower right corner of the photo.