Feathers on the Brain 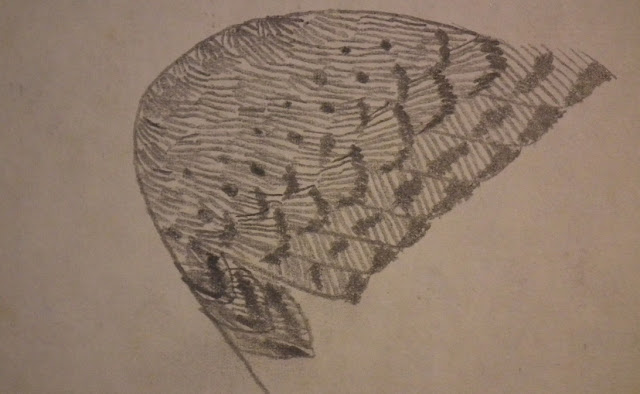 Way back in high school, one of my classmates was a licensed falconer. He really impressed me with his knowledge of raptors. He could identify all the local hawks and owls, and talk authoritatively about them.
I particularly remember one day in art class when he was trying to do a pencil drawing of a hawk. He was struggling with the feathers of the bird's shoulder. His drawing looked very similar to the re-creation I did in the above photo. He knew all about lesser and greater coverts, secondaries and primaries etc. What he could'nt do was make them look natural.
He was far from satisfied with his results and we were discussing the difficulty of making feathers look right. I wanted to help him but I did'nt know how to properly render bird feathers either. The art teacher was fully aware of our discussion, but she felt that it was her job to encourage artistic self expression rather than to teach technique. I assumed at the time that she did'nt help us because she could'nt draw feathers either.

We were approaching the problem from an illustrator's perspective, rather than an artistic viewpoint. We knew nothing about the underlying structure of the bird, and how it influenced the surface texture of feathers. 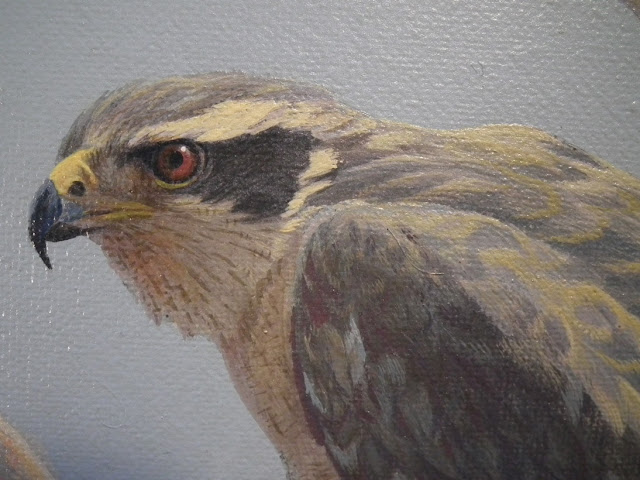 In the last post I discussed the need to pay attention to tonal values. This time I will cover the topic of underlying form. I did'nt start making any real progress with surface textures until I spent a great deal of time studying the works of other artists, especially Robert Bateman's paintings. He was all about the overall form, and never obsessed about detail. I would love to use some of his paintings as examples, but I worry about copyright infringement so I'll use my own paintings which are heavily influenced by his approach to painting.
Learning to paint feathers is like learning to read. You memorize the individual letters but you can't start reading until you place the letters in context with the entire word. You can't make a feather look right until you place it in the proper context of the wing's basic shape. The trick is to paint the form of the wing first, and then add individual feathers. Or rather the impression of individual feathers. The Goshawk's shoulder in the photo above is an example. I formed the feathers around the contour of the hawk's shoulder only after I had painted the shape of it's shoulder. 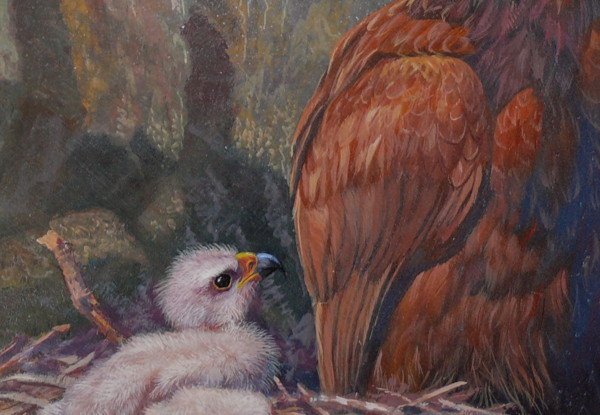 The contour of the Golden Eagle's wing in the photo above is another example.
About the same time I was struggling to draw feathers correctly I was given the art materials of a local artist who had recently passed away. He died after a long life and my understanding was greatly enhanced by studying what he left behind.
One important clue I picked up was a simple notation left on a preliminary sketch. It said, "light source?" and was followed by an arrow. I puzzled about what that meant until I realized that the artist was referring to the directionality of the painting's light and shadows. The painting above for example, is strengthened by the strong light with cast shadows which emphasizes form. The adult eagle's wing looks right because I painted it's form in context with the rest of the composition. All this before I added surface details.

Birds with complex patterns like this Golden-crowned Sparrow are an added challenge because you have to figure out how to incorporate the pattern into the bird's form. First you need to think about the form and then contour the pattern to wrap around the curves. Some markings will be very distinct where they face the viewer and others are intentionally obscured to suggest curvature.

This Red-throated Loon demonstrates how the feathers follow the curved form of the bird, with some cast shadow to create the illusion of three dimensions. It has the added feature of some reflected light at the back of the bird.

Making white feathers can also be a bit of a challenge. One of Robert Bateman's paintings that astounded me most of all was a pair of Tundra Swans standing on a frozen lake. It can be found in his first book. It impresses me so much because it depicts a white bird, standing in front of another white bird, both of them set against a white background.
The technical challenge of pulling that off is something that  amazes me. I analized that painting for hours on end. It helps to have a strong light source for that kind of a painting to emphazise the bird's form.
The painting above depicts a pair of Trumpeter Swans that I observed in Potter Marsh, south of Anchorage. Notice the mix of warm and cold tones beneath the swan's plummage, and especially in the cast shadows. 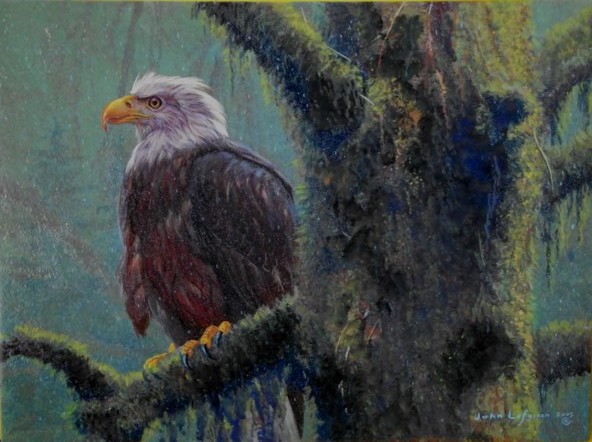 Another challenge that I still struggle with is the look of wet feathers. Two things that help re-create that impression is to show streaky down in between the surface feathers, and to add a reflective sheen like you can see on the eagle's back.

Those same characteristics of streaky feathers and reflective light can be seen on this Red-necked Grebe's back. There are also water droplets that dont really show well in the photo. This is one of my favorite paintings. 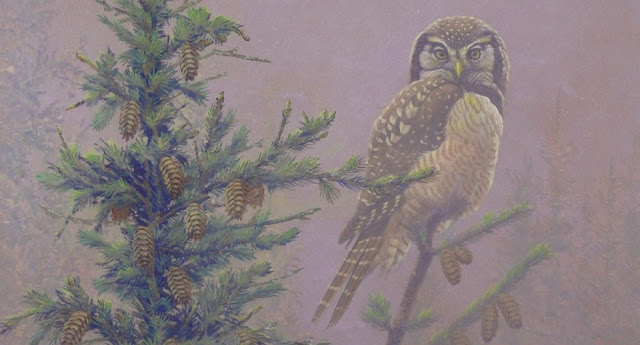 Another crucial technique to understand is the use of washes and glazes to create atmosphere and mood.  A wash is a very thin layer of white or any color that includes white. A glaze is a very thin coat of paint of any color that excludes white. Payne's Gray makes a great wash, and Burnt Sienna makes a great glaze. Robert Bateman is the undisputed master of these techniques.
There are hardly any hard details on the above Northern Hawk Owl because I used several thin washes over the whole painting. It softened the mood of the painting. 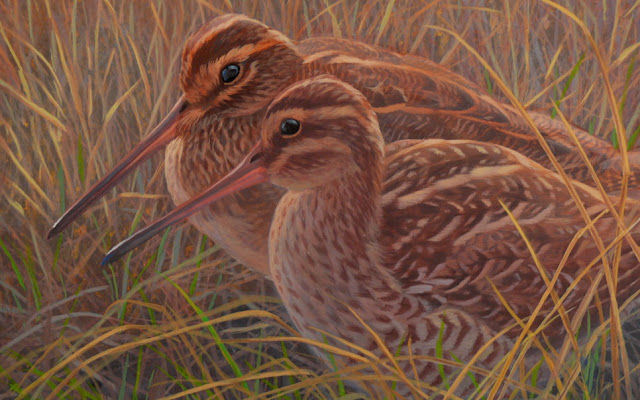 This Snipe painting is warmed and softened by some Burnt Sienna Glazes applied on top of the painting.

I really took it to an extreme with this Snowy Owl painting. There are almost no details on this bird's body.
Posted by john at 5:20 PM