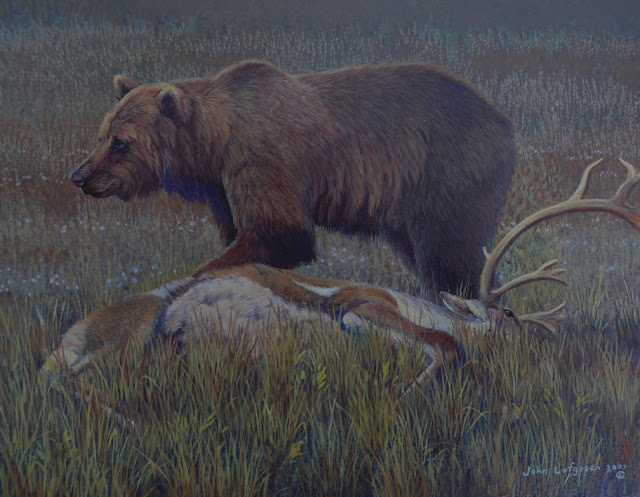 For the last few days I have been working on a painting that is turning into a bit of a stinker. At this point, it is doubtful that I will even complete the thing. I got so discouraged today that I quit painting, gessoed over four older stinkers, and assembled these photos for this post. In some perverse way, I like to show my failures to show the contrast between good paintings and bad. The definition of a good painting tends to change over time as I change.
The painting above is a squeaker, rather than a stinker. The bear on it's kill did manage to avoid being recycled, and I actually sold it. 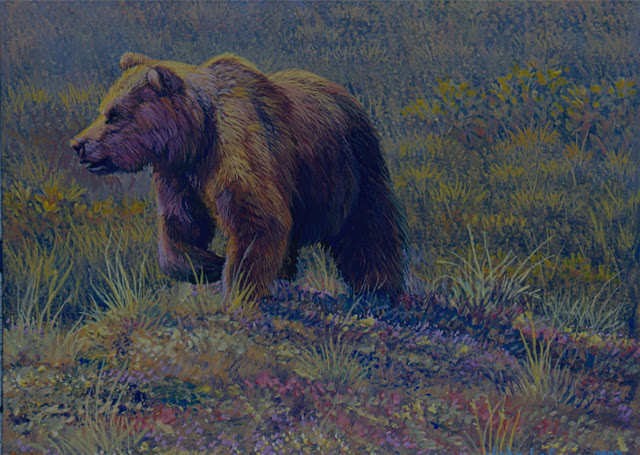 Another Bear painting. This one was only 5x7". It sold easily. 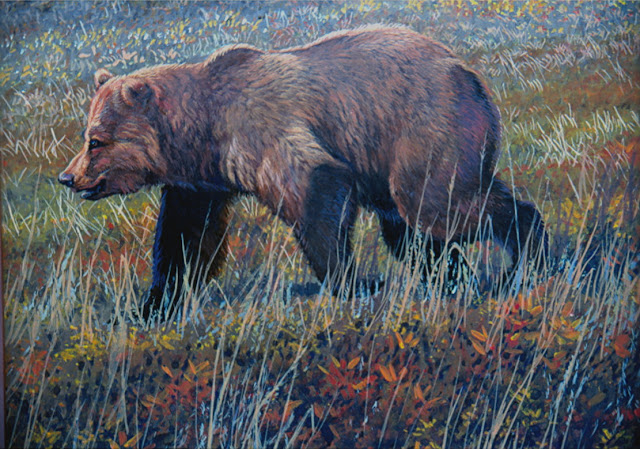 Another 5x7" Grizzly that also sold. All three paintings are based upon bears that I saw in Denali NP. 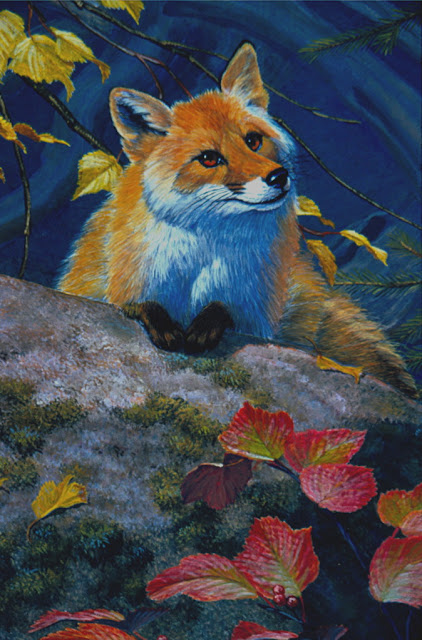 This 20x16" painting turned out to be a stinker. I was initially satisfied with it, but no-one else liked it. I eventually painted over it. It is nearly impossible to be objective about your own work. 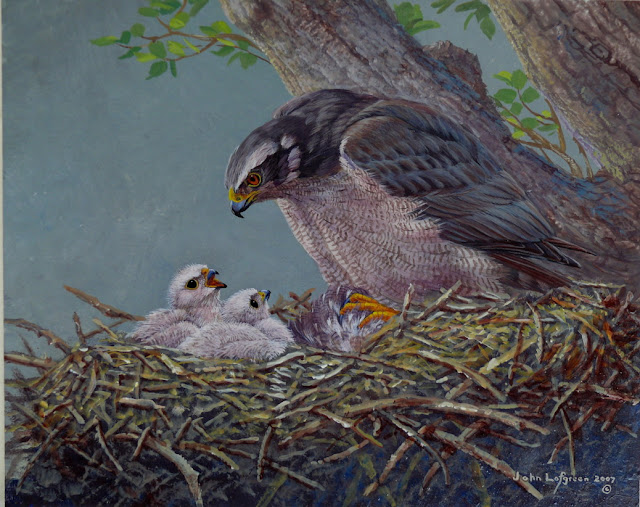 Not a stinker, although I don't remember what became of this Goshawk painting. 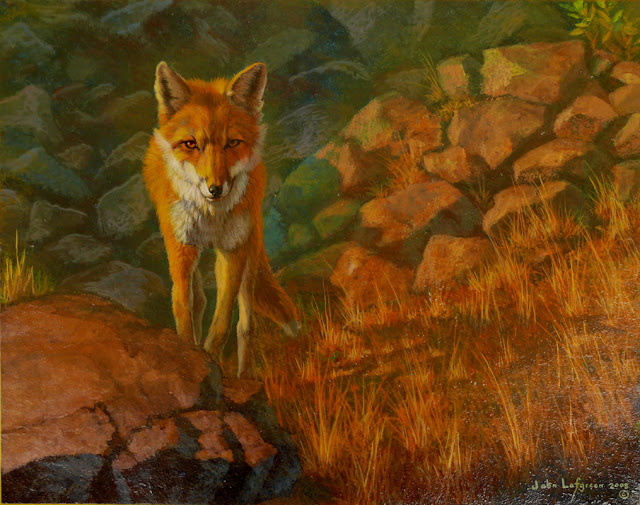 This painting idea has some potential, but ultimately it is another stinker. I painted over it. It is based upon a Red Fox that I saw in Denali. 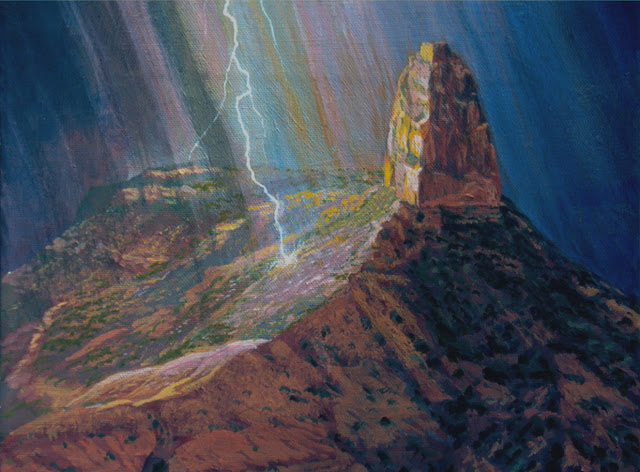 An 8x10" rendering of lightning in the Grand Canyon. Another stinker that met an ignomineous end. I am tempted to paint the canyon more often. So many great artists have done inspirational paintings of the canyon. I have done a few decent paintings of it as well. Not this one. 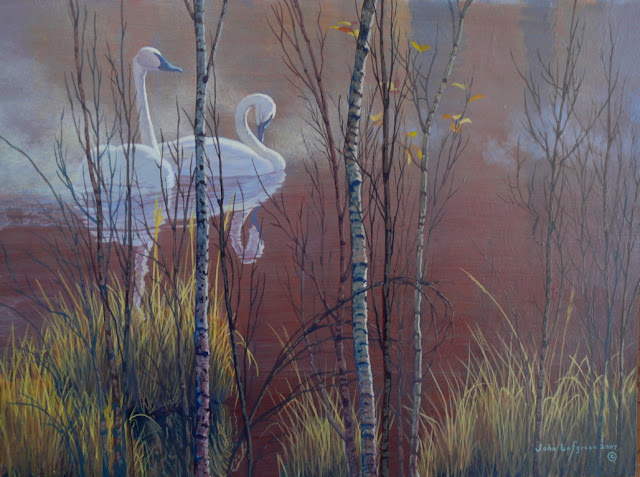 This one is almost good. I should revisit the idea again sometime. I believe that I killed this one also. 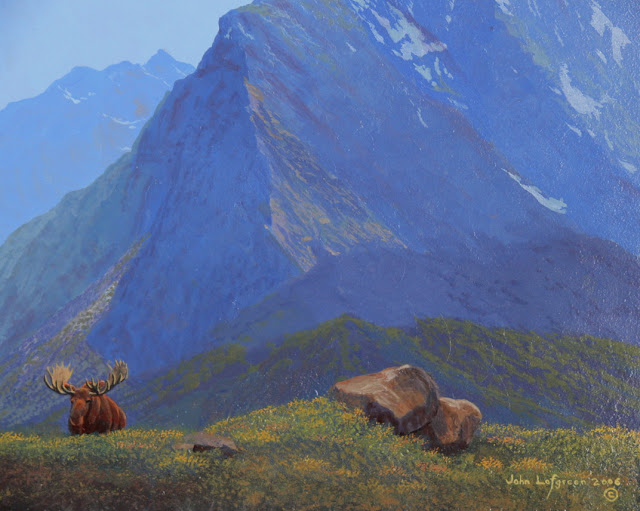 Archangel Pass, 8x10". I liked this one well enough. No one else did. Kiss it goodbye. 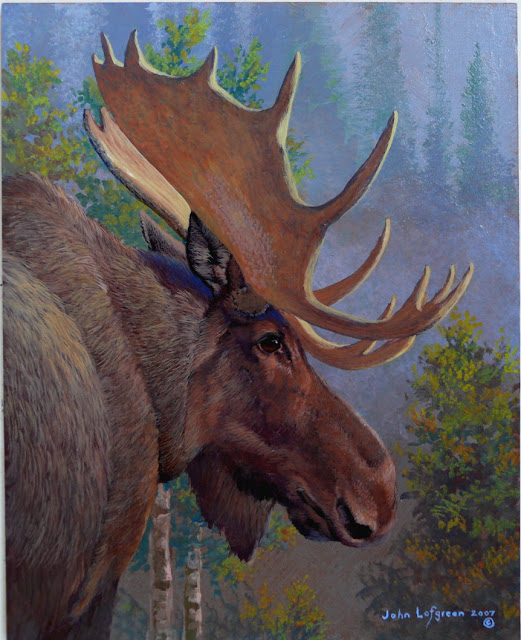 A 10x8" Bull Moose. I don't remember what became of this painting. If I see it again, it's going bye-bye. 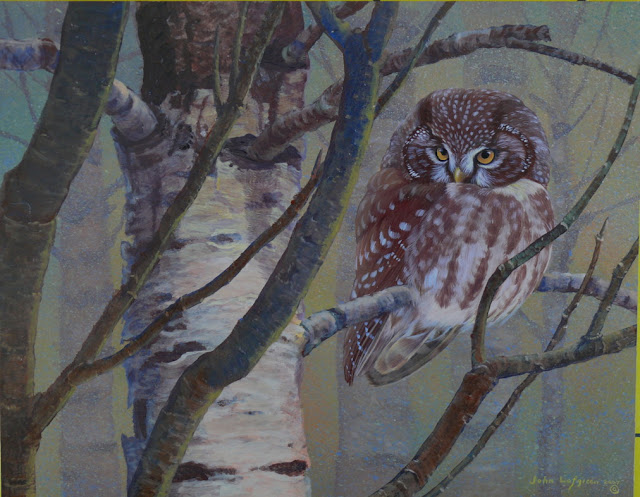 A Boreal Owl that also met a bad end. The owl is not so very terrible, but the tree is not up to snuff. Maybe I should not be so self critical, but I have produced a whole lot of bad art in my career. Let the surviving art be only my best efforts.
Posted by john at 6:28 PM

Personally I think it is a good thing when artists share their stinkers. So many new artists think that "real" artists produce perfect pieces every time and they get discouraged and even give up because of all of their stinkers. Thank you for sharing!

Thank you for your comment Gabrielle. As an artist progresses, or at least changes, paintings that were initially good, eventually start looking bad to the artist. At least that's how it is with me.
I was proud of some of these paintings when I first finished them. It's best for me to send them off somewhere, or I'll eventually destroy them all.

The Goshawk picture is my favourite, especially the facial expression of the mother, very tender.

Great post John! Seems a shame about the Boreal Owl, a painting that I like very much - never to be seen again - well at least not the original!
Like the bear paintings and especially the new chickadees on the header. Please feel free to throw any of your rejects my way :)

Thanks for your generous comments Jeremy. Anytime you want to swap paintings, let me know, I'm game.