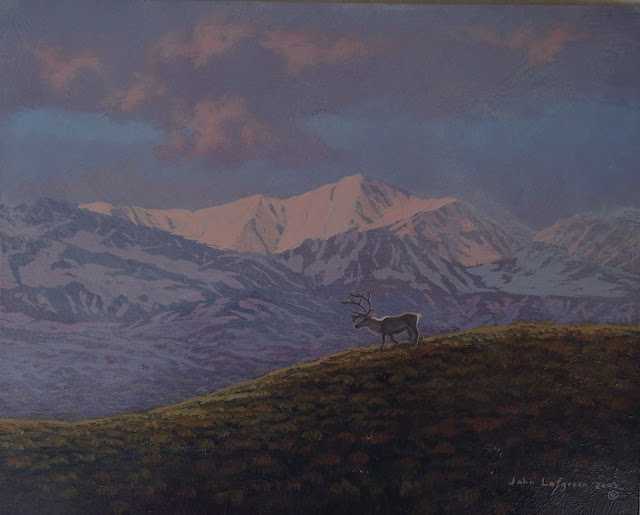 Years ago I met a woman living in the White Mountains of Arizona who grew up on the Great Plains. She remarked to me that she was intimidated by big mountains and especially terrified whenever she had to drive along steep, narrow mountain roads.
I have shared her stress being on death defying roads like Papallacta Pass in Ecuador. The Salt River Canyon in Arizona is notoriously scary to many people. At least it has good roads with frequent pull outs.
Other than driving challenges, I have always loved mountains, and always lived in, or near them.
I also love painting them, like this small 8x10" Caribou set against a mountainous backdrop. 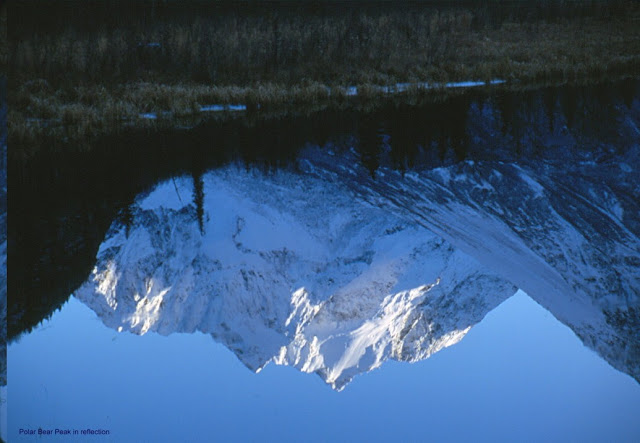 This is an upside down view of Polar Bear Peak above Eagle River. I may have posted this photo before, but I really liked how utterly still the water was when I shot this photo. 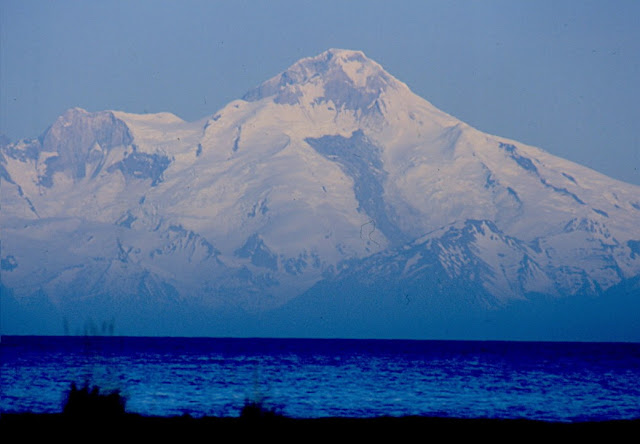 The land of the midnight sun. It was about midnight when I shot this photo of Iliamna, (an active volcano) while I was standing on the beach near Homer. 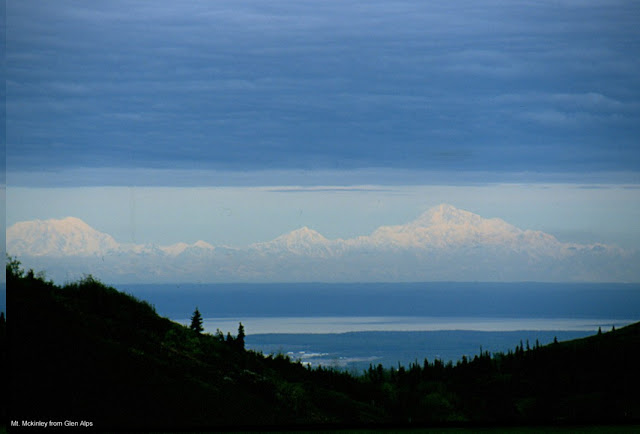 The big boss of North American Mountains is Mount Mckinley. Called Mount Denali by the politically correct. It can sometimes be seen from Anchorage. In this view it is barely visible on the right, in this photo from the hills above town. That's Mount Foraker on the left.

A close view from the Parks Highway, taken on a bitterly cold, Winter day. 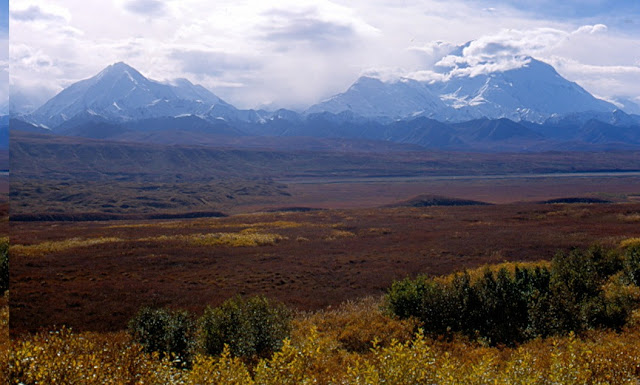 Mt. Mckinley and Foraker from the other side. The big mountain looks completely different from different angles. Some mountains like the Grand Tetons or the Matterhorn hav a very distinctive, and majestic look. Mckinley looks like a big pile of cow poop from most angles. Nevertheless, it retains its majesty. 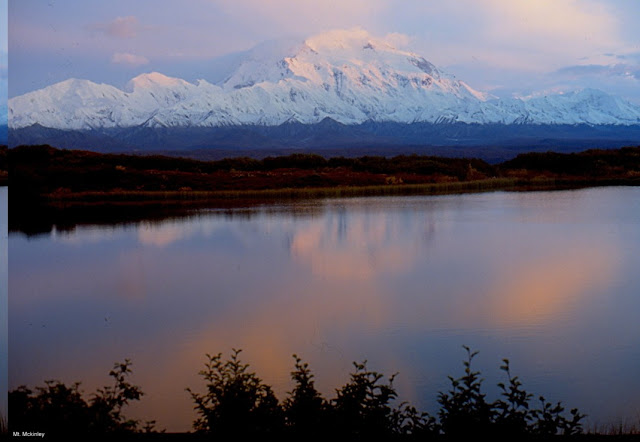 It certainly looks regal when viewed from Reflection Pond in Denali National Park. Many people travel to the park hoping to get a good view of the mountain. It is hidden in clouds of its own making most of the time. They leave disappointed in their quest, but they always see great wildlife.

This angle deserves another look without the pond. 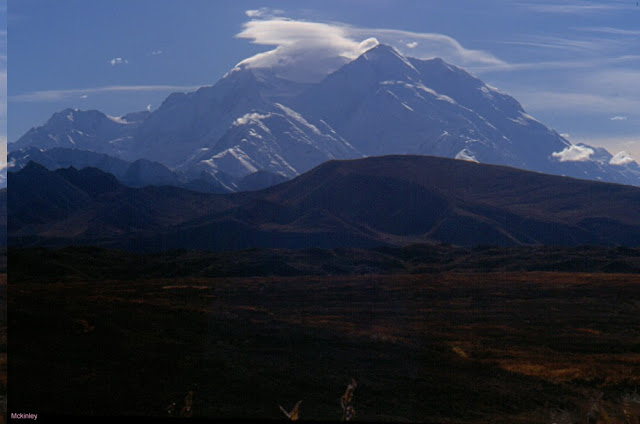 Getting even closer. The base of the mountain is blocked by its foothills. 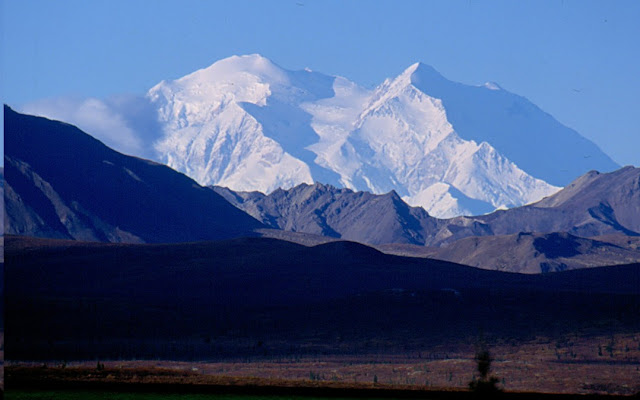 From this viewpoint you can see twin summits. I forget which of the two is actually highest. 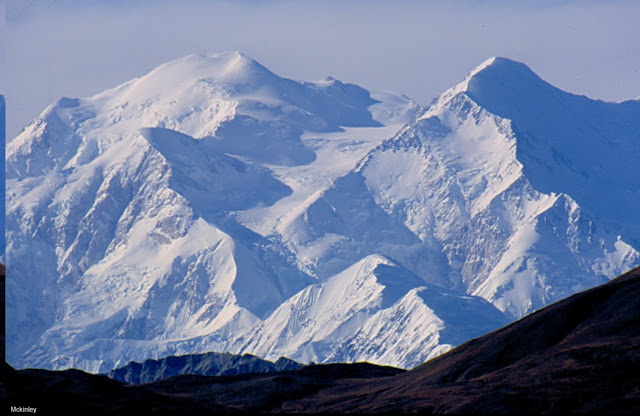 Mckinley is 20,320 ft high. You can feel the cold emanating from it as you get closer. There are always hearty souls who feel the need to climb it. That is no easy feat, and many people die in the attempt. I certainly have never been that adventurous nor physically capable of such an attempt. But what a glorious pile of cow dung it is.
Posted by john at 10:31 PM

Hope you had a great birthday.