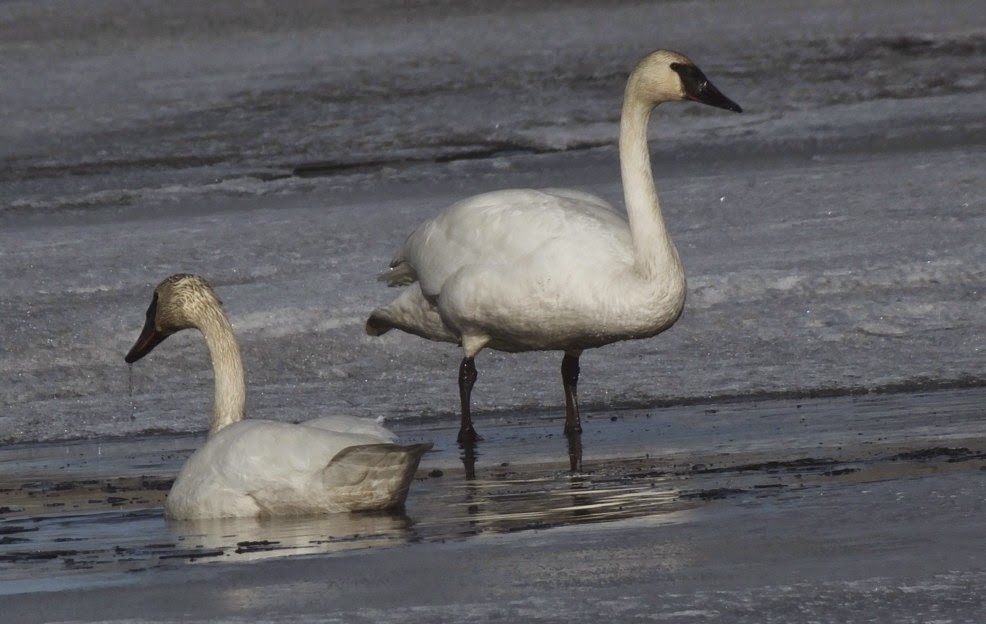 Since the last cold snap about a month ago temperatures  have been slowly creeping above the freezing point; at least during the day. At first a small patch of open water appeared at the mouth of Chester Creek.
Immediately the resident Mallards showed up to occupy the fresh habitat.
Slowly the open patch grew in size and crept down onto the lake below Spenard Crossing. Then on Tuesday of this week a pair of Trumpeter Swans materialized as if from nowhere. 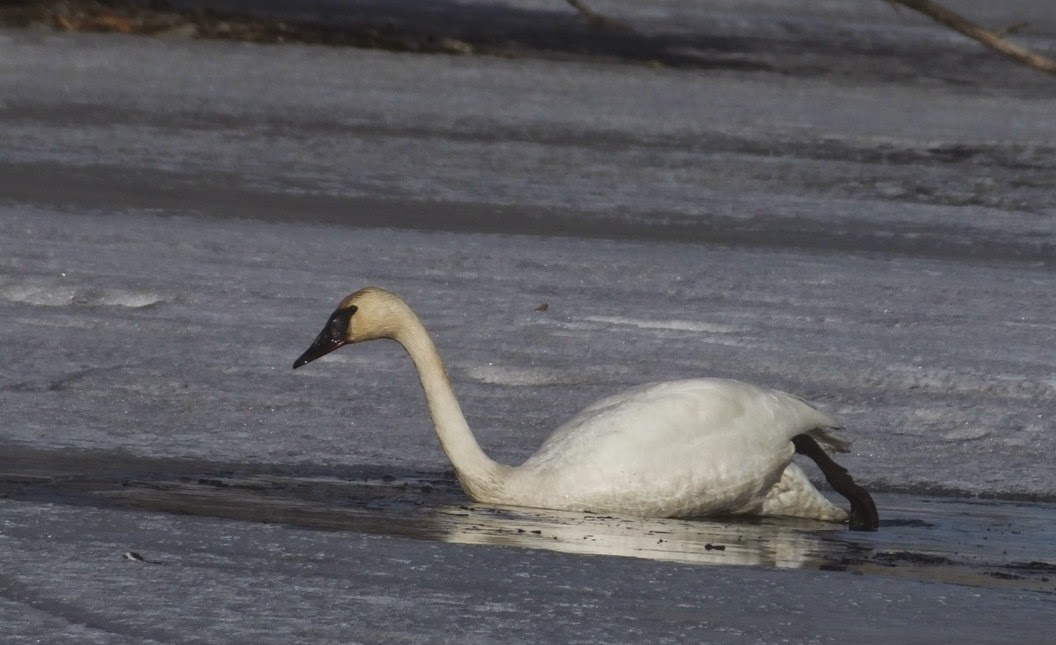 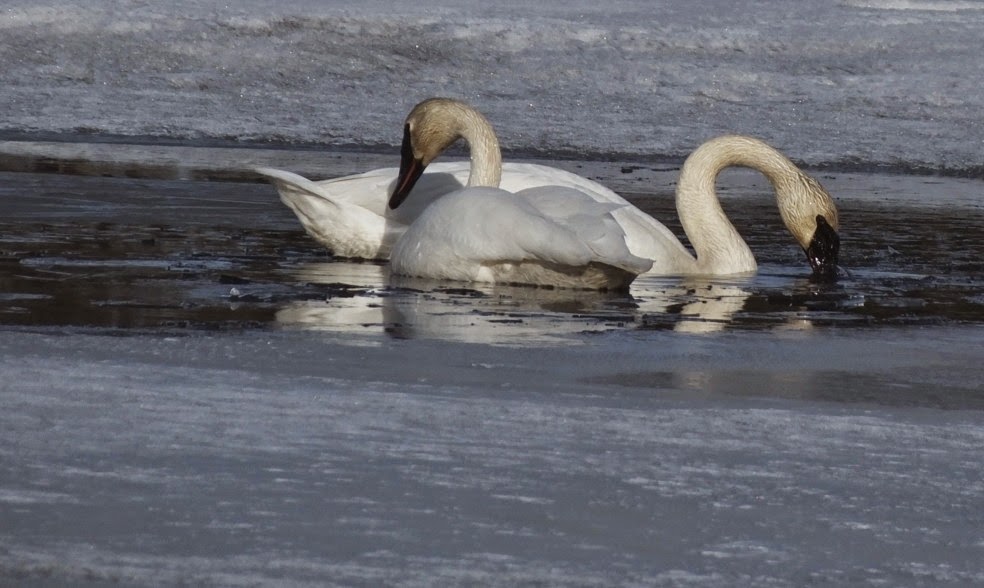 These swans are about the first migratory birds to arrive in Anchorage every spring. This year they are a month early. I made it by Spenard Crossing on Wednesday to get these photos. It was a bright, sunny day but the skies have been overcast since then. 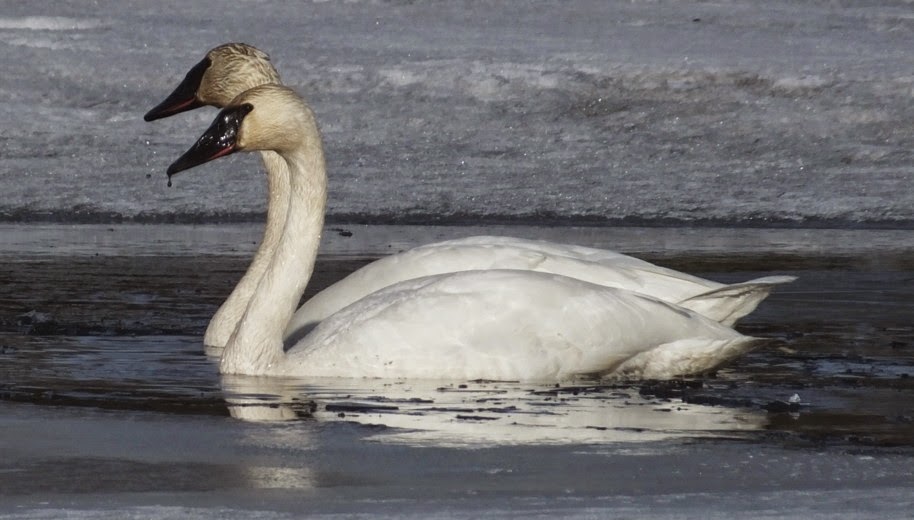 These birds will be here for a short time only. Soon they will move on. Only they know where they go next. 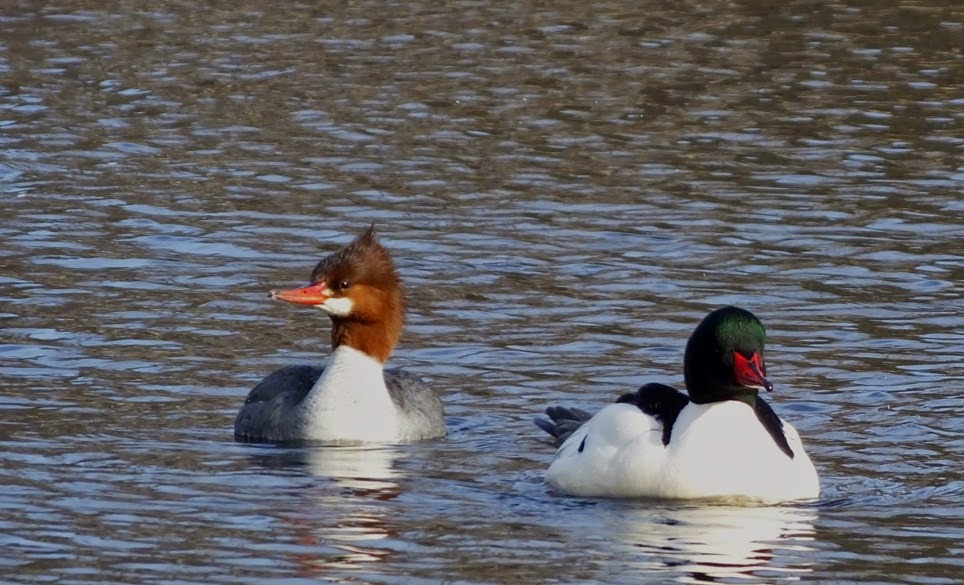 While I was admiring the swans, a pair of Common Mergansers flew in. Who told them that there was now some open water to be found? 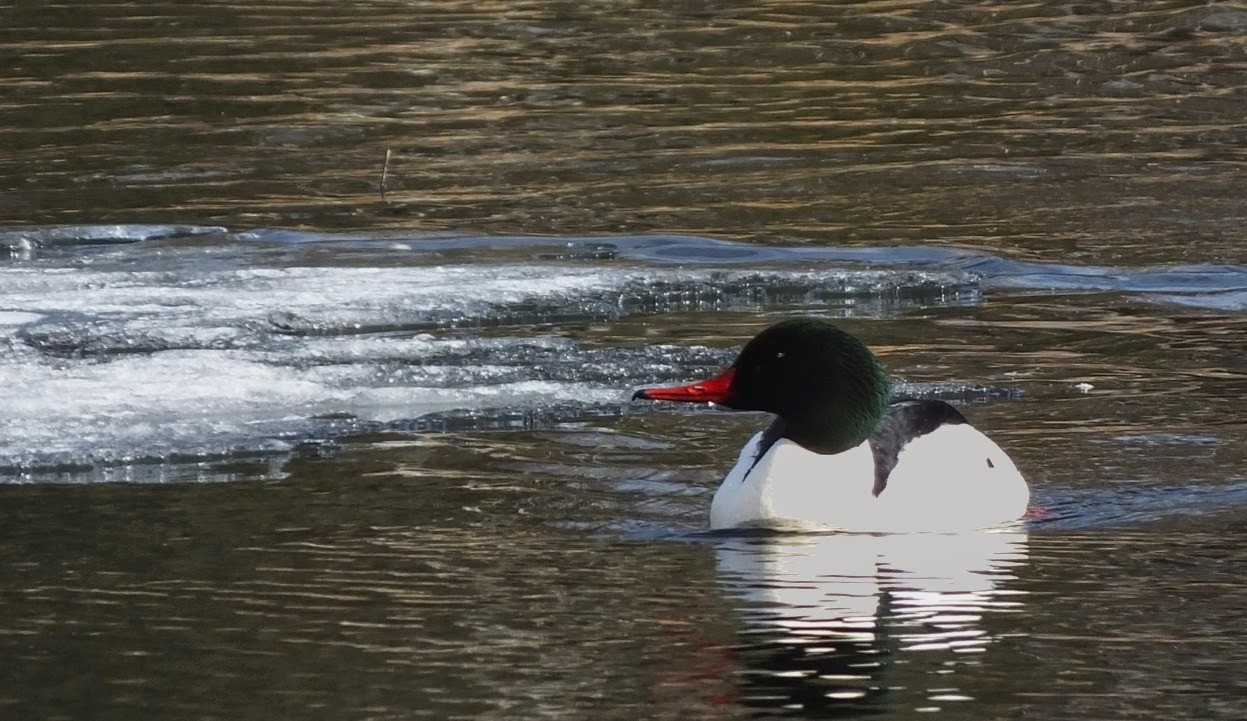 The ice seemed to be melting away while I watched as the patches of open water grew in size. 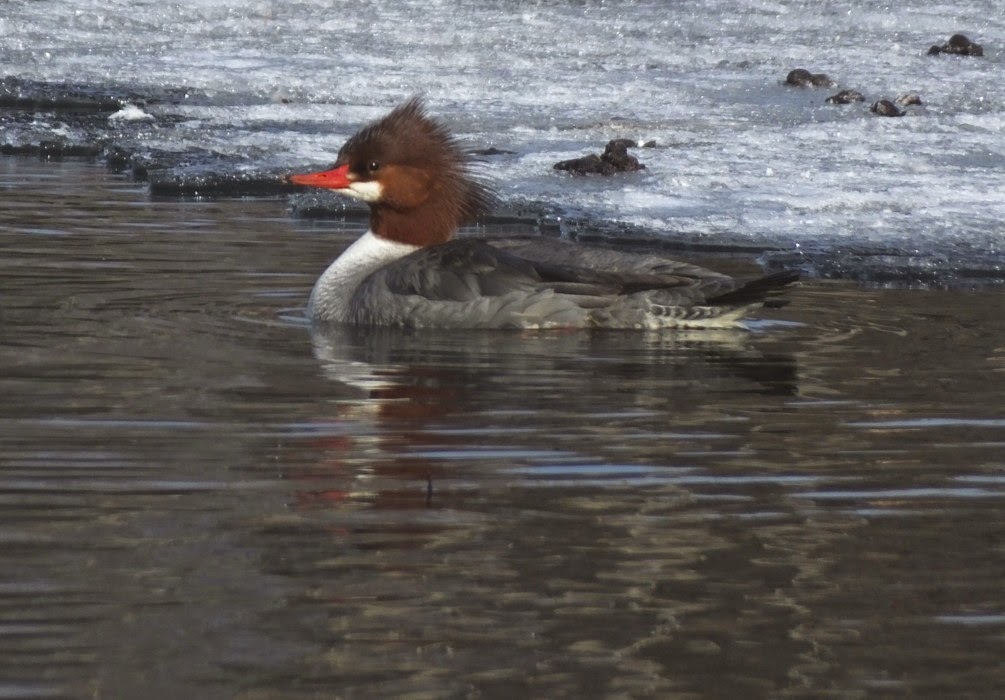 The females are more impressive than the males in my opinion. That is not the case with other species of mergansers. They are generally easier to approach than males. 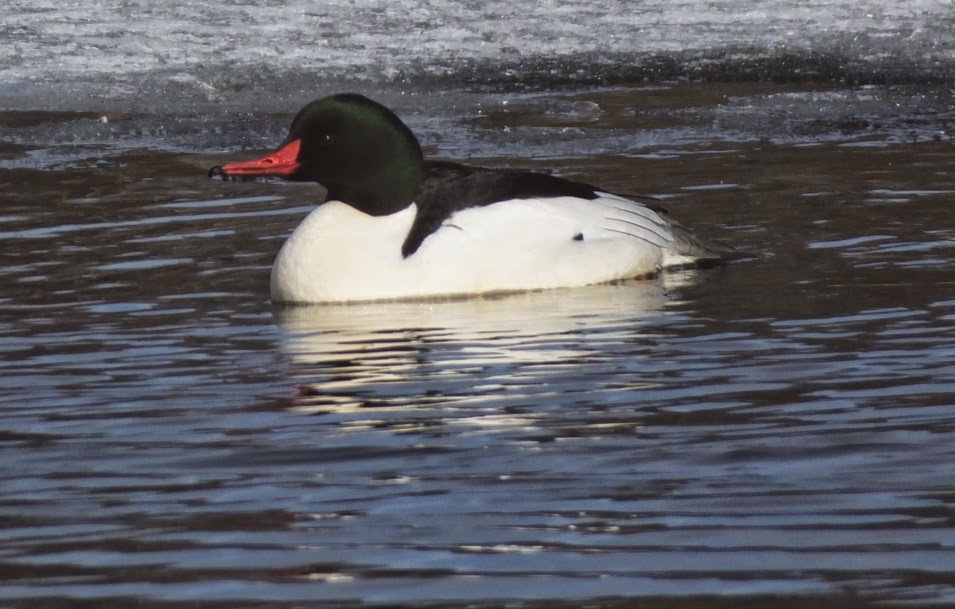 The male does not care what I think about the subject to be sure.
They will soon be moving on as well. They nest along flowing river banks. 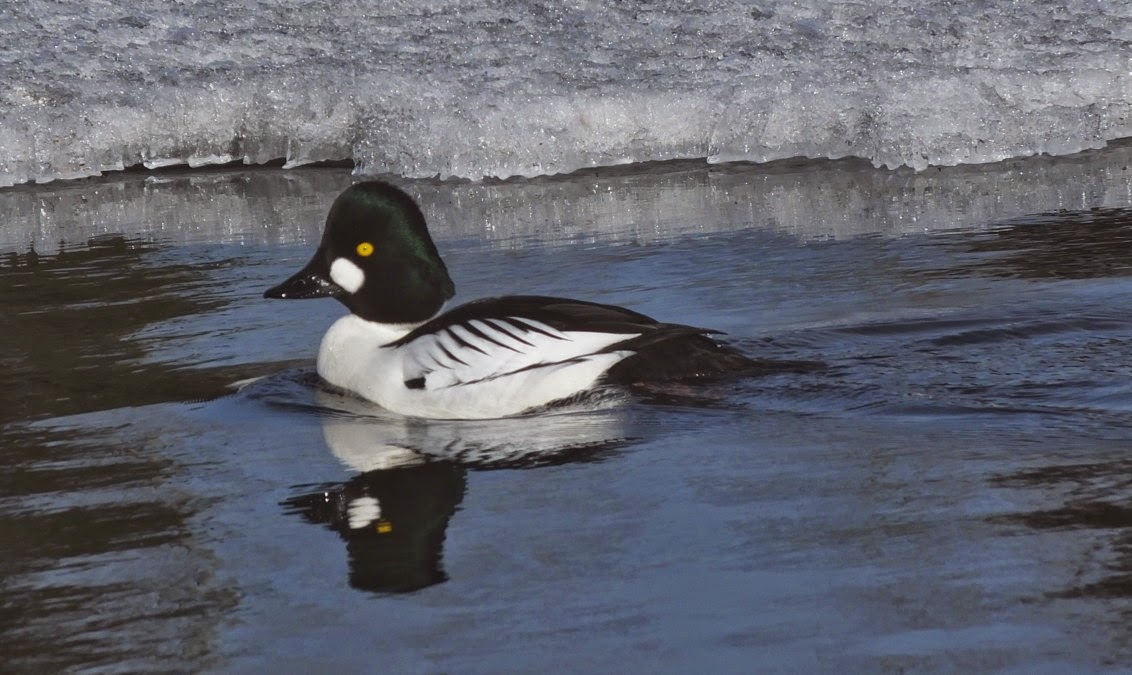 Common Goldeneyes first showed up on Wednesday also. Another duck which nests, (in tree cavities) along flowing river banks. 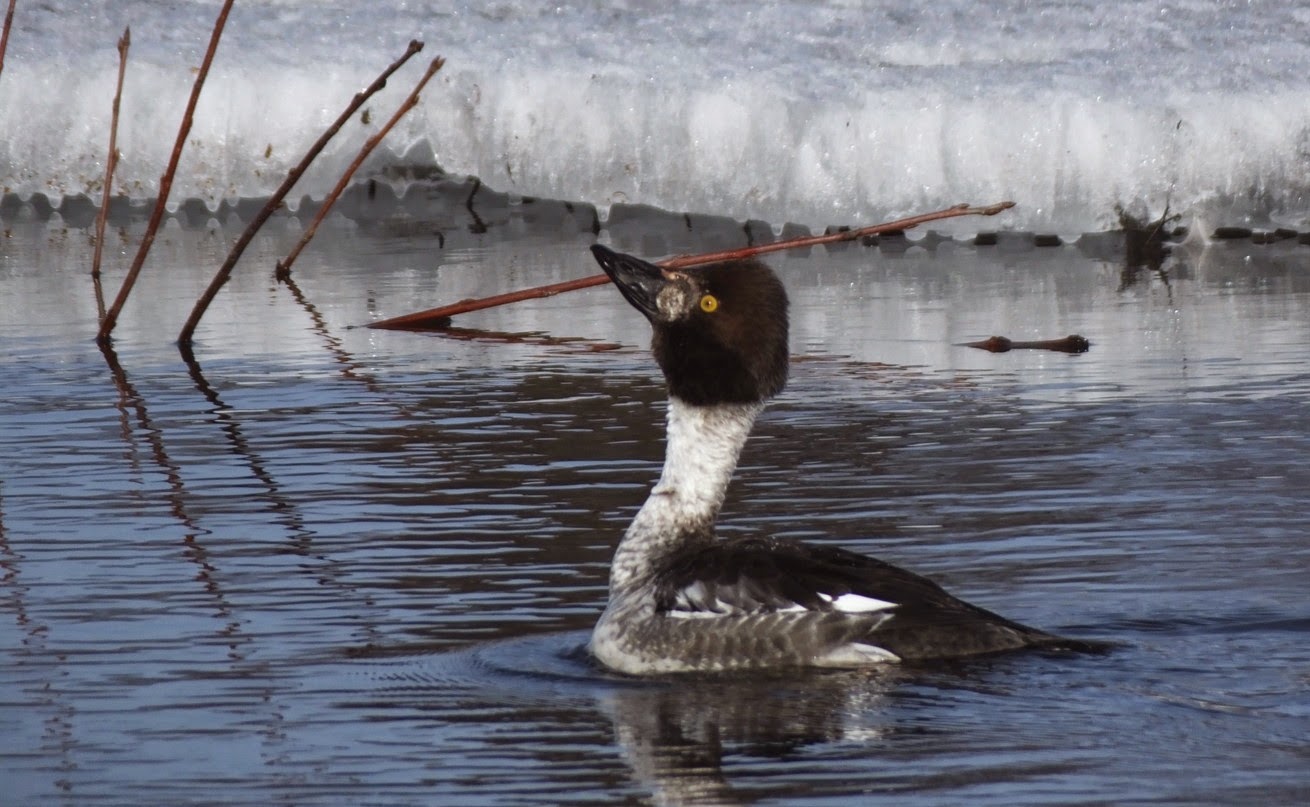 I guess that this is a female bird although her markings and behavior are a little puzzling. 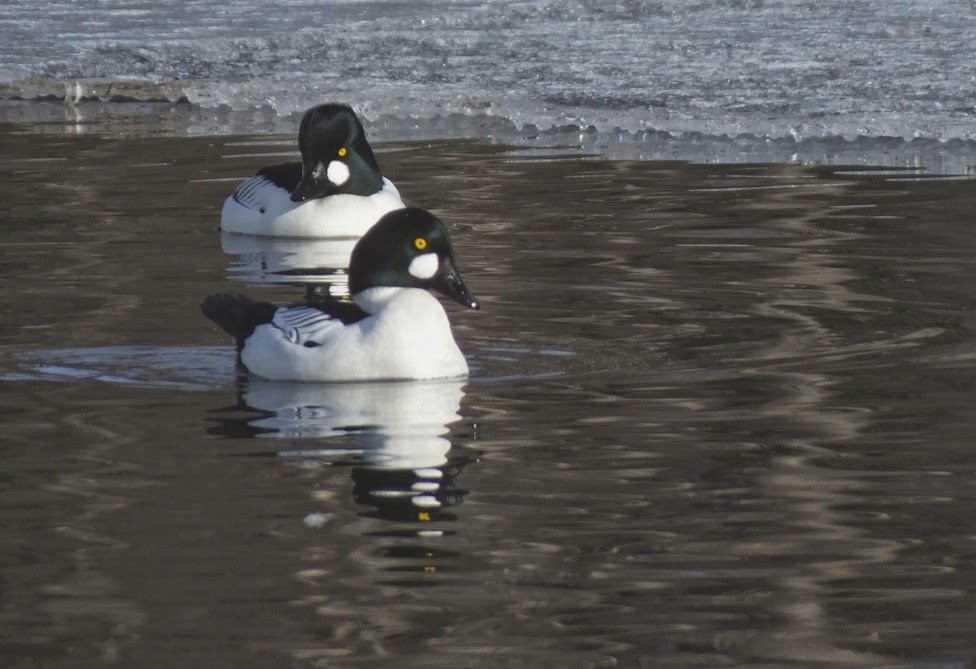 There were many more males present than females. 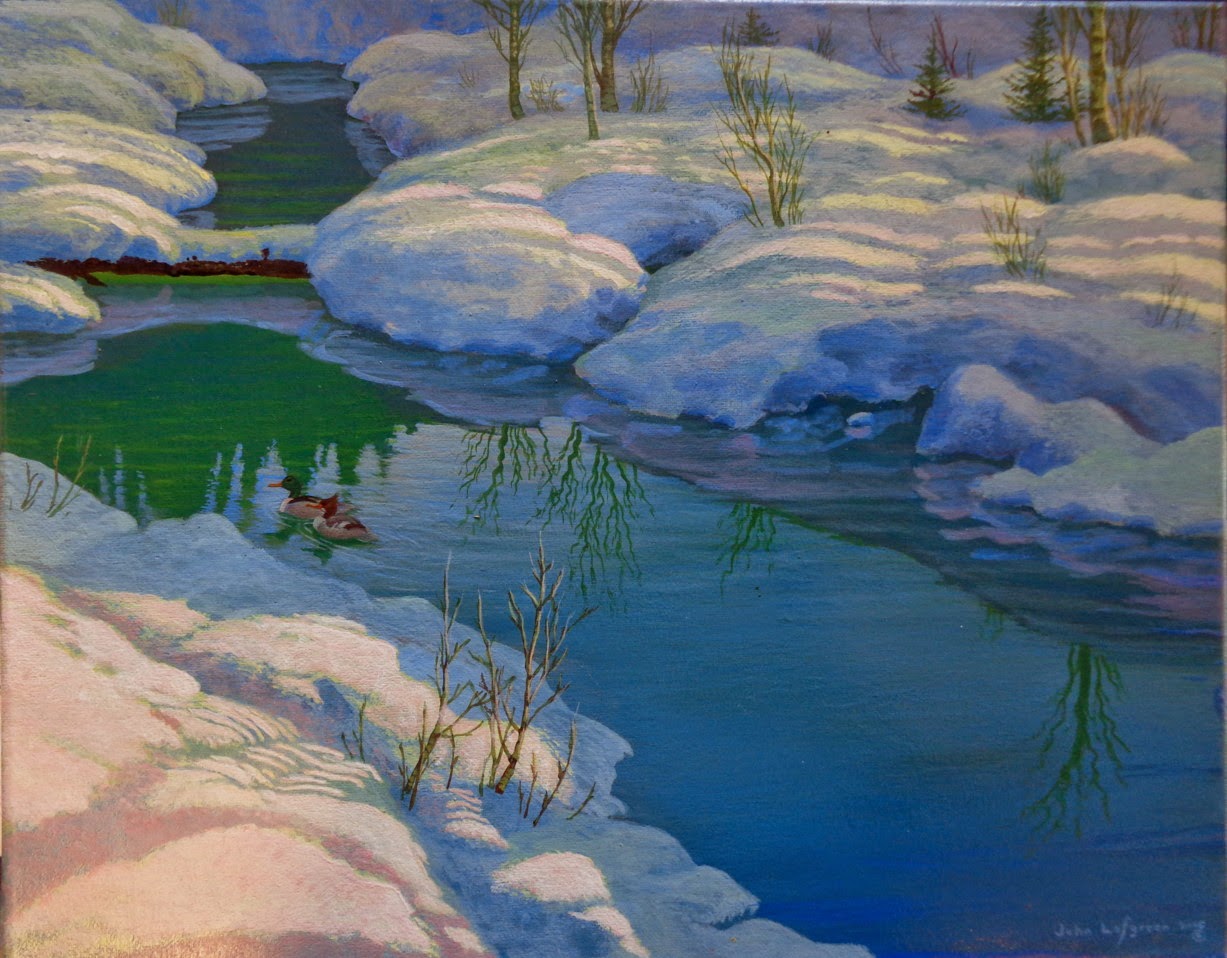 Since I finished the elk painting I have been completely lazy. This 2006 painting received some minor damage over time so I repaired it. While I was at it I made a few minor alterations that improved it. I like the crisp colors of this one. Other than an hour working on this I have done virtually nothing with my artwork.
Posted by john at 12:36 PM

This is super random question. I have been looking for a Lana Parker that is from St George utah. Your blog pulled up because you'd mentioned the names Jeremy and Lana. I believe her husbands name is Jeremy. If you see this comment can you email me. JBRACKENL@hotmail.com I worked with her years ago and lost touch through the years. Thanks Jenny

Lovely series of photos of some of my favorite water birds - looking spectacular against a backdrop of ice! Glad to see a painting of the same type of subject too. Hope you gain some momentum with you painting - I too go through those periods although for me they are usually mercifully short.