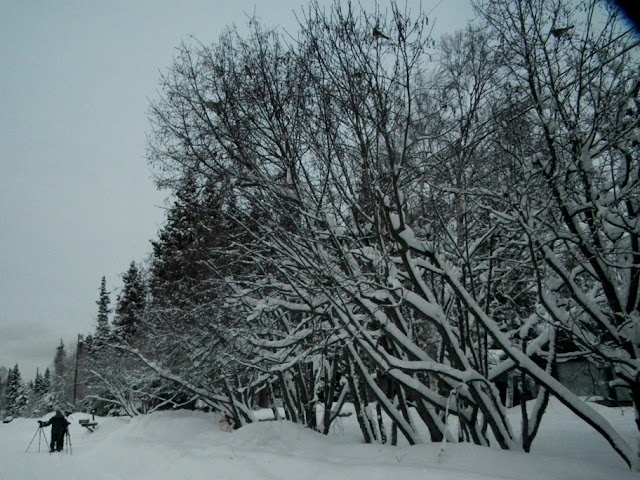 At a little past noon today, Bob Winkler, (president of the Matsu Bird Club) picked me up, and we headed across town. When we arrived at Loussac St, there were already several birders  there. They had just seen the target bird, but naturally it left before we saw it. Notice the Robins in the trees. 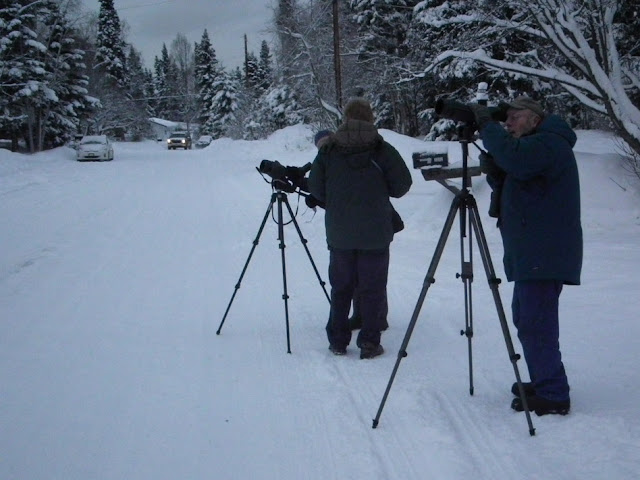 We got set up and waited to see if it would return. The people living in the neighborhood must have thought that the gathering birders were a bunch of lunatics. They have been seeing birders from far and wide tromping around for almost two weeks. 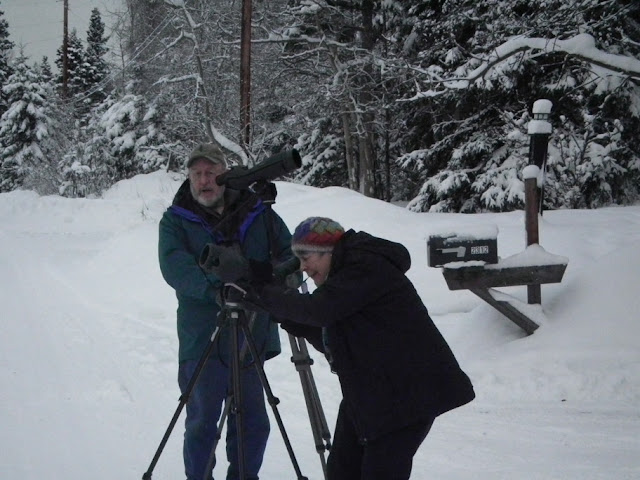 The man with the beard is Bob. The woman in the photo is a local filmaker but I forget her name. 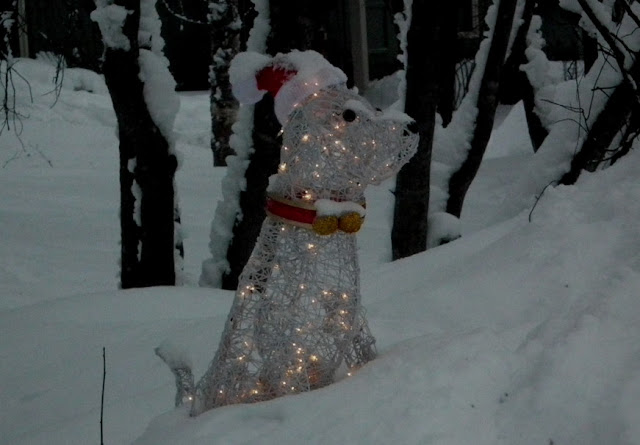 Someone's yard was being guarded by a Christmas dog. 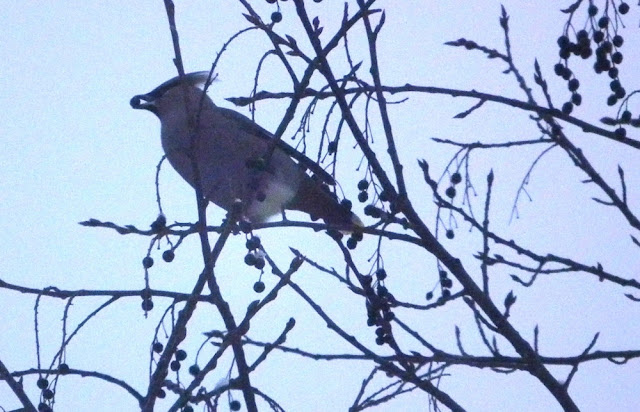 There were lots of birds in the area because there are lots of Chokecherries, and Mountain Ash berries. This is a Bohemian Waxwing. 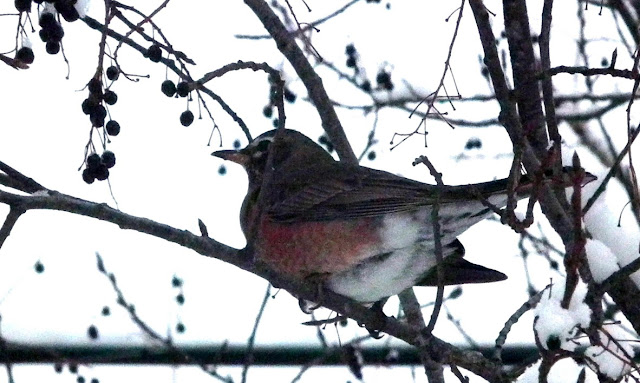 There was a flock containing fifty or sixty Robins. They were not shy. 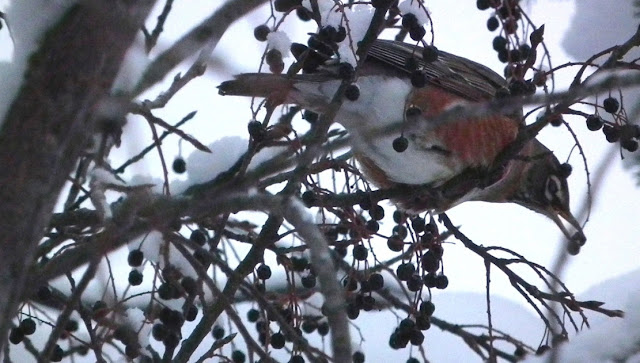 Our target bird has been seen travelling with Robins, and we needed to scrutinize each Robin carefully. 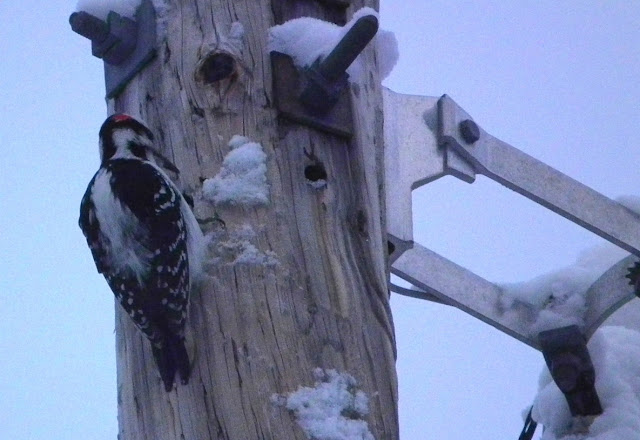 It appeared that this Hairy Woodpecker was gathering peanut butter from a feeder and stashing it in the cracks in this telephone pole. 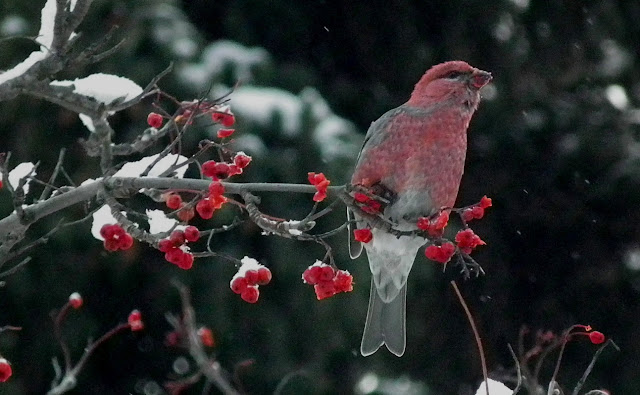 The best photograph I got today was this male Pine Grosbeak with Mountain Ash berries. 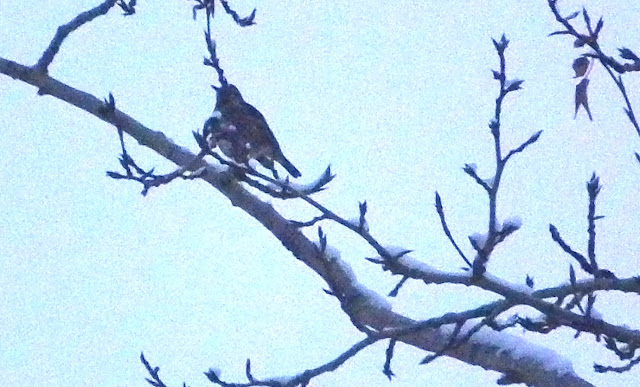 THIS IS IT. You cannot identify this bird from this terrible photograph, but it's my third Alaska lifer for the year. We did'nt have to wait for long before one of the vigilant birders spotted this Dusky Thrush. It is an Asian bird that breeds in the Central and Eastern Palearctic. It winters, (normally) in Central and Southern China, Taiwan, and Japan. I believe that this bird is the first seen on the North American mainland with the exception of a few individuals seen in Barrow, Alaska in past years. It has been many years since I have seen any new birds in Alaska. This bird must have been blown in on the same storm that brought the Redwing to Seward. That bird has not been seen since the day I saw it with Betty and Jean. The Dusky Thrush is a Turdus Thrush, like the Redwing.
This winter has also been good for Mckay's Buntings and Snowy Owls locally, although I have not seen any of them. I will soon be doing a post of the top ten new birds for 2011. My three Alaska lifers are sure to make the list. The rest will be my favorite Uganda birds.
Posted by john at 6:14 PM

How exciting to see the thrush! The snowy pictures make me happy to live where it's relatively warm. But snow is beautiful and those birds are very exciting. I also liked the Ugandan birds on your favorite birds post.
Happy New Year! May 2012 bring more lifers.