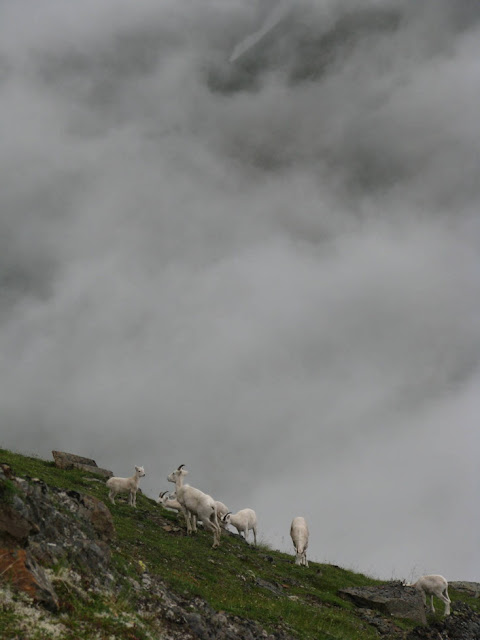 Dall Sheep are the version of Big Horn Sheep that inhabit the far north. They haunt the mountain slopes all around this part of Alaska. The photo above was taken by Bart Quimby, a friend from my Eagle River days. He gave me permission to use his photos in my paintings.
I knew right away that I would end up using this photo in a painting someday. 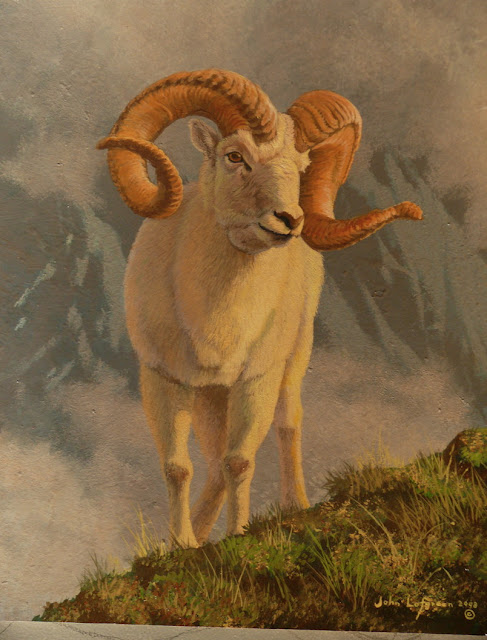 This was my first attempt. A nice enough little painting although it is not much like the photo. 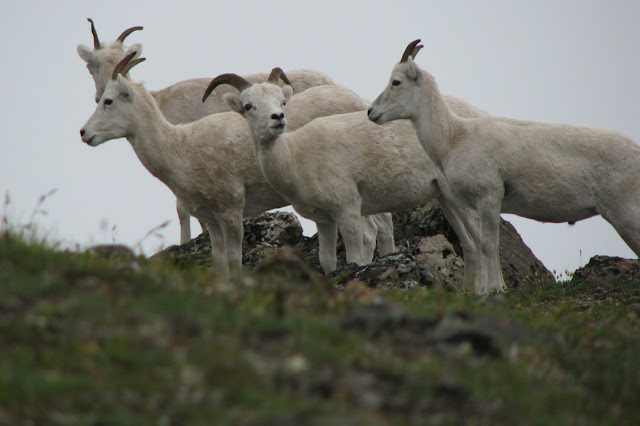 Bart managed to get much closer to Dall Sheep than I have gotten. At least on the occasions when I had a camera with me. 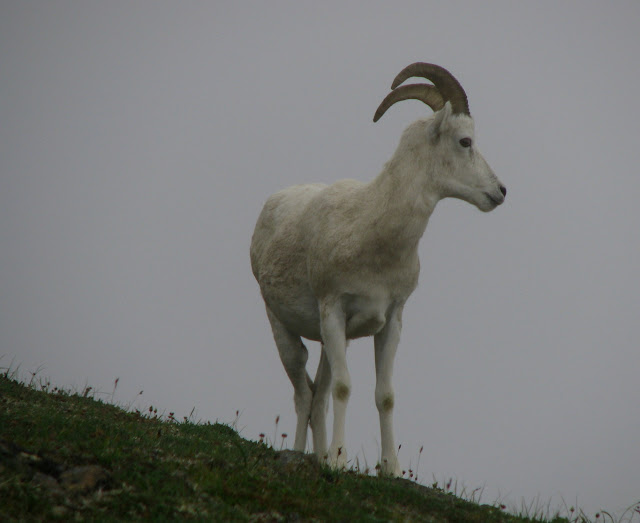 This is another photo that I wanted to use in a painting. 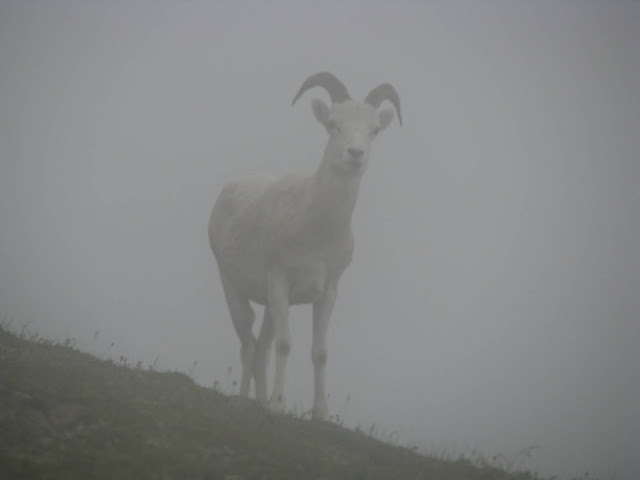 The fog caught up with this ewe. That sparked an idea in my head that took years to fully mature in my mind. 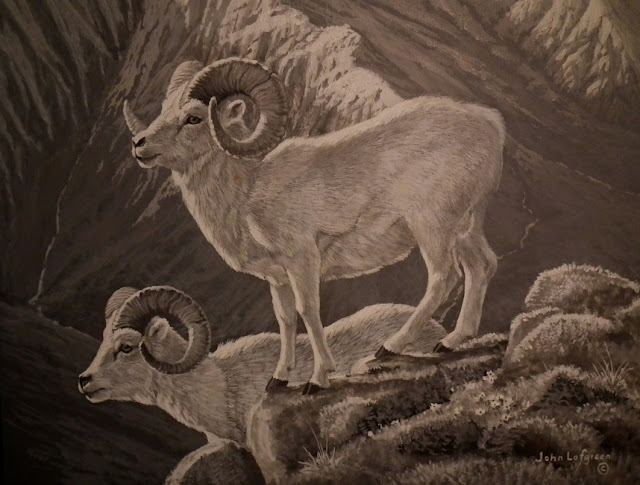 In the meantime I did a few other Dall Sheep paintings. This 9x12" study was painted in black and white. 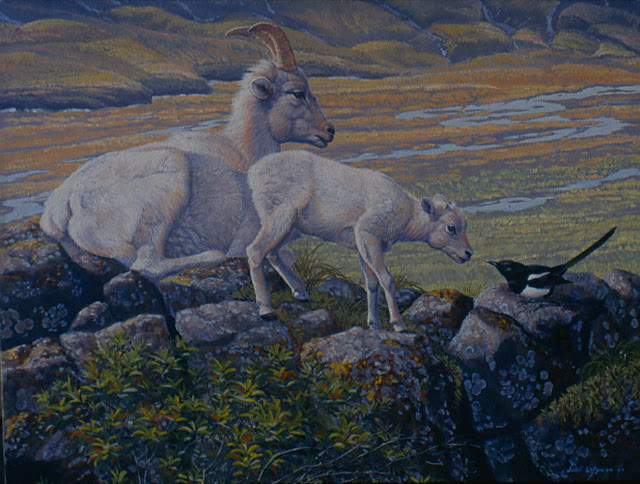 This 11x14" canvas was the very first Dall Sheep painting that I did in 1997.  I did this painting before I ever saw Bart's Dall Sheep photos. 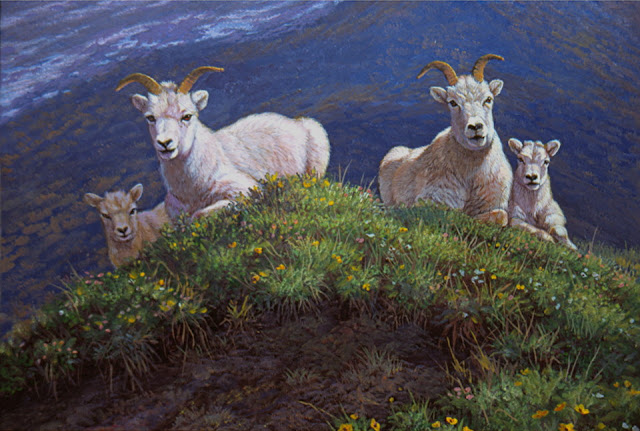 A different 11x14" version of the previous painting. 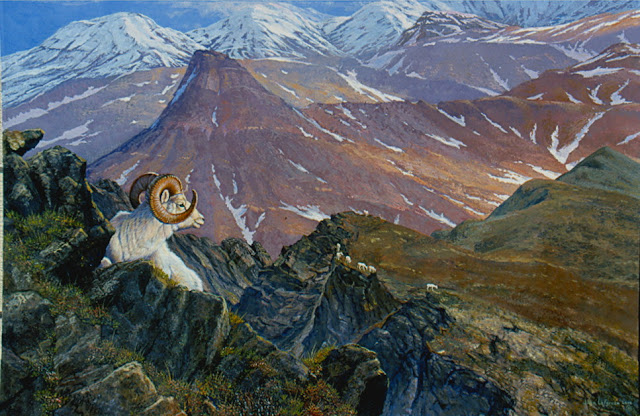 A much more ambitious canvas followed a few years later. It is 24x36". 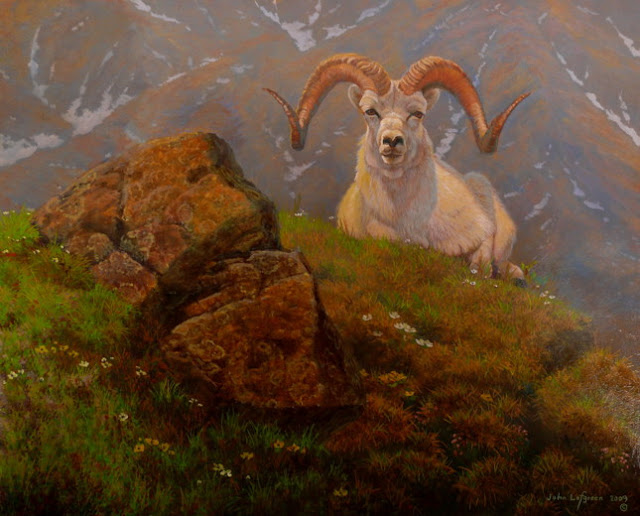 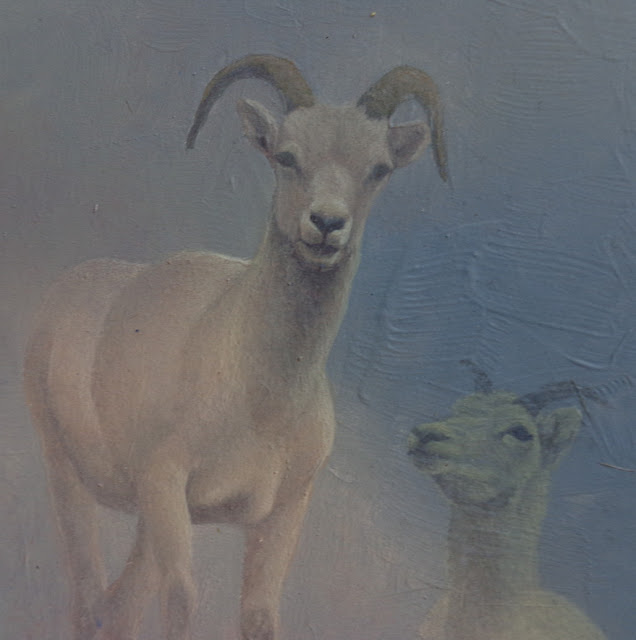 Finally I decided that it was time to use the photo of the fog enshrouded ewe in a new painting. I gave it a younger sister for good measure. 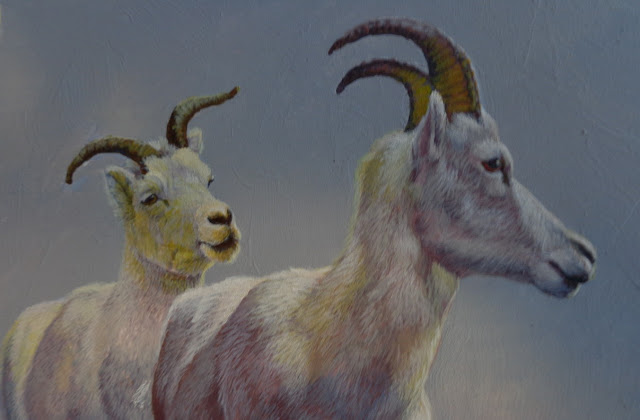 I gave her two more sisters just out of the fog. The ewe on the right is actually the same fog enshrouded ewe, taken before the fog arrived. 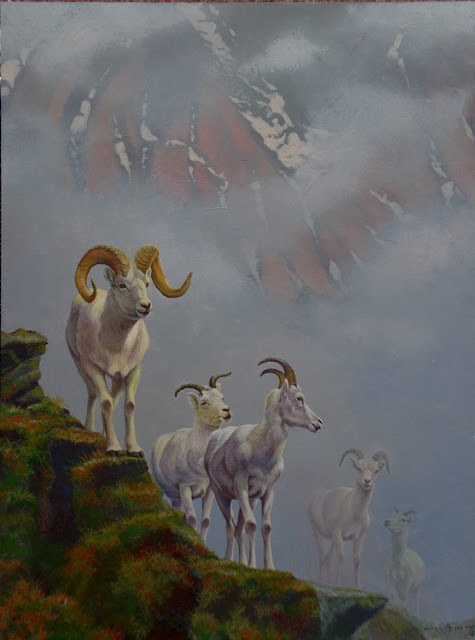 Next I added a ram to complete the composition. I kind of like this 24x18" painting that incorporates three of Bart's photos. It only took a little over a week to complete. It was a fun challenge to paint the increasing intensity of light, color and detail from back to front. The working title is, 'Upslope'. Can you think of a better title? Let me know.
I am already about half way done with a new 11x14" painting of Parakeet Auklets.
Posted by john at 8:32 PM

Great Dall's sheep paintings John,the painting where a male stands on the hill while ovserve the rest of the group is the best in my opinion.

Thanks Marc. I don't know if I made it clear in the post that this 24x18"(Upslope) painting is my latest effort; and I agree with you. It is my best Dall Sheep painting.

Great series of paintings! Amazing that you have done so many, I usually tire of one particular subject quite quickly (unless they are of large falcons). So much to paint - so little time!

Thank you Jeremy. These paintings span a period of 18 years so it is not so many paintings in that expanse of time. For comparison, in that same amount of time I have painted at least 500 chickadees and 100 Grizzly Bears. Now those are two subjects that I am tired of.

I like the complexity of light and fog in that last painting. It is interesting to see a number of pieces you did on the same subject over the span of 18 years. Thank you for sharing :)

Thank you for commenting on my blog Matt.