The Big Critters of Denali 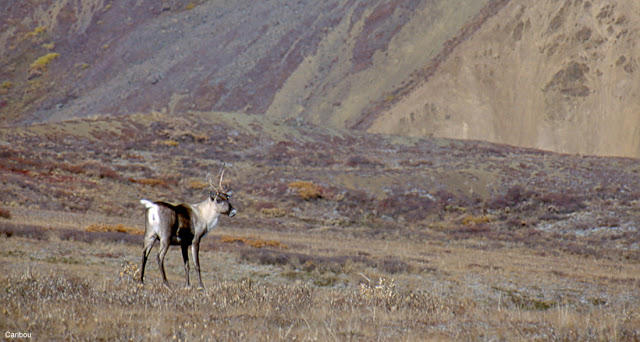 Somewhere I have much better Caribou photos than this, but it will do for now. Much of Denali Nat. Park reminded me of the high deserts in Northern Arizona. A bull Moose rests in the thick tundra. Walking through this stuff requires major effort. After stepping over thick vegetation, your feet sink into foot deep icewater. It all looks dry, but is quite wet. 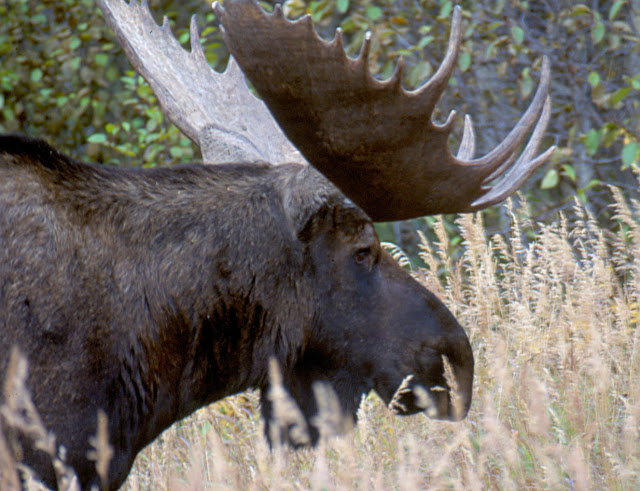 We were half a mile from the van, trudging through tundra when this rutting bull approached us grunting loudly. I started to move away as fast as I could step but Shane told me to hold my ground.
The bull got way too close for comfort but veered off before killing us. 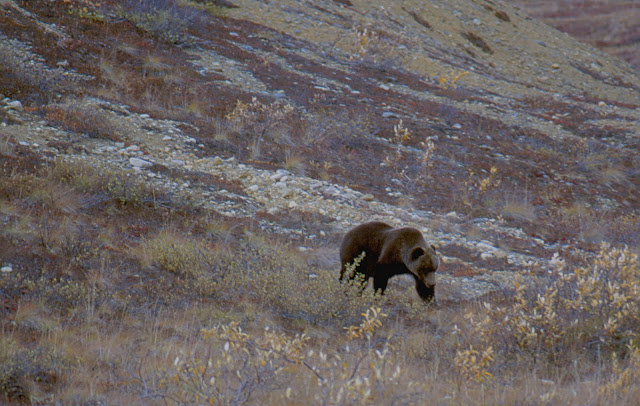 The thing that every visitor to Denali wants to see is a Grizzly Bear. We saw many. Park rules forbid people from approaching bears and other wildlife so we would find a vantage point and watch for them. After determining which direction they were travelling we would position ourselves about a half mile ahead of them and wait for them to come to us. 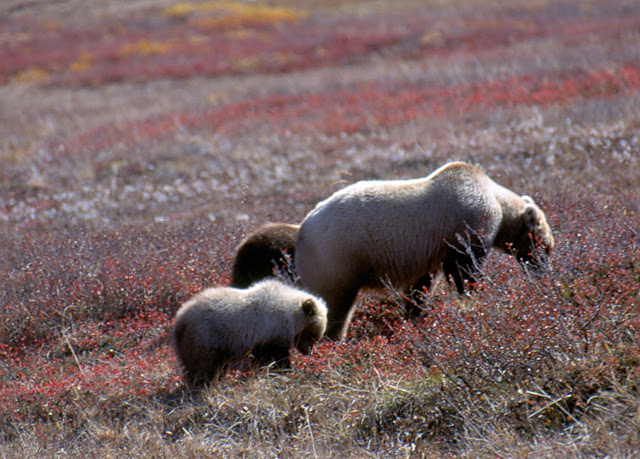 This mother Grizzly showed a small amount of concern for the people watching from the road, but was much more vigilant watching out for other bears. It was quite a thrill to be approached by a bear when we were away from the vehicle. 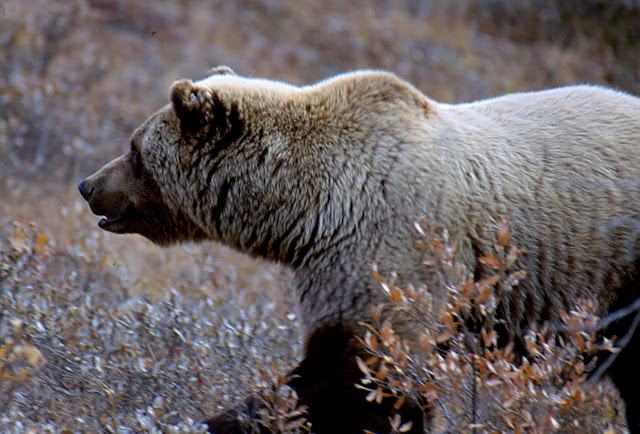 This bear veered away after it walked to within fifteen feet of me. Another bear came so close that I could not focus my 400mm lens on it. The lens focuses at 12ft. None of the bears displayed any aggression. 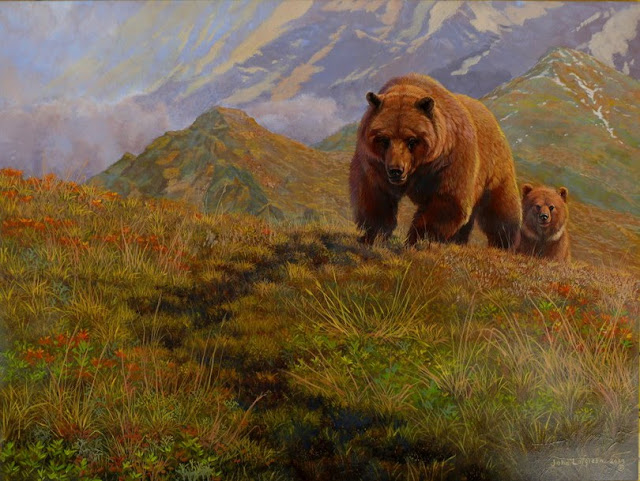 I shot many photos of Grizzly Bears and have used them in many paintings. Following Ancient Footsteps, 18x24". 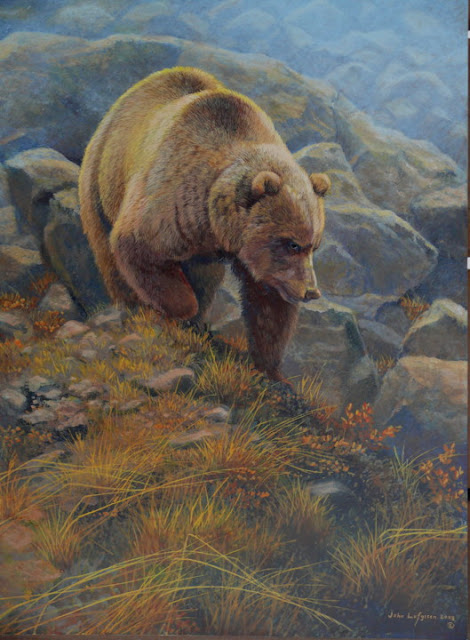 I forget the title or size of this painting. 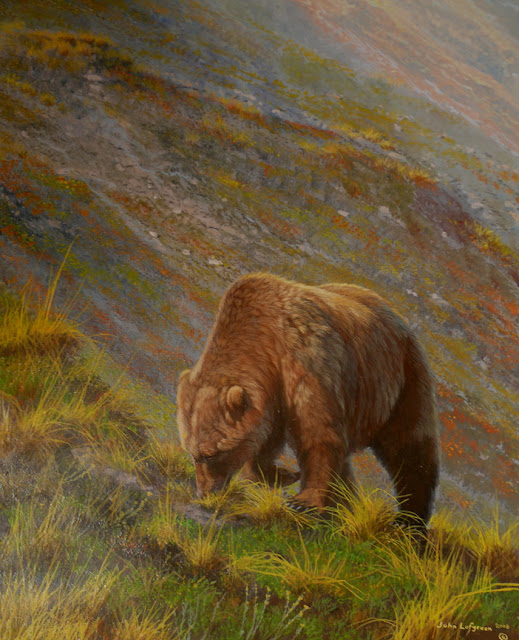 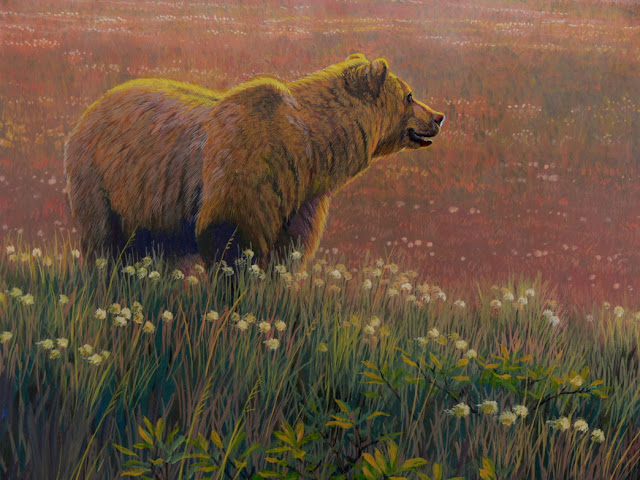 Cotton Grass Grizzly, 11x14". Denali has inspired many more paintings of mine, and will no doubt be the subject of many more. I will return.
Posted by john at 4:11 PM

Wow, the bears are spectacular. I grew up seeing many black bears eating the apples off my moms trees. I remember mom going out and shooing them away by banging a spoon on an old pot. Just last week when we were on vacation we heard a branch crack and then a big thud, seems a black bear fell out of a tree from about 20ft up. We didn't get to see the bear but the ranger said he was seen often in the area.

You have some stunning pictures and painting here John. Denali is one place I missed in my travels unfortunately as it is fantastic.

The two thing I would have liked to have seen are the bears and Red foxes but I am not sure the last is in that area.

Teresa I have been enjoying your recent trip reports, love the loon photograph.
Joan I have enjoyed reading your comments on the Mainly Mongoose Blog. If you read the blog post before this one, you will see that Red Foxes are common in Denali. I should add that Denali is a difficult place to visit because private vehicles are not allowed without a special permit. Most people visit by bus, and that must be booked in advance. It is no bargain. The park will close for the winter in a few weeks. It reopens sometime in May I believe.