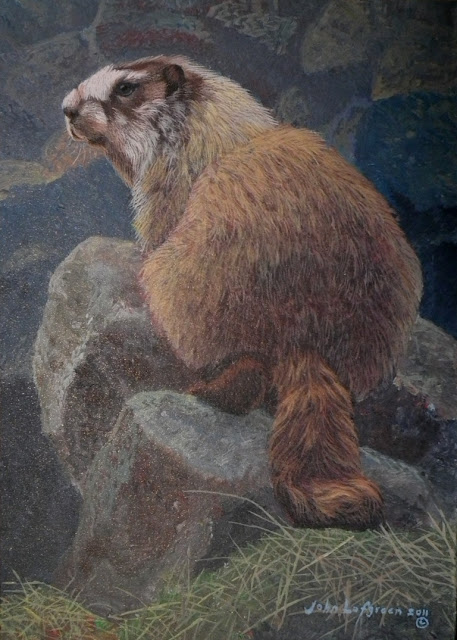 Hoary Marmot Study, 7x5"
My latest painting is another miniature. This is the Alaska sub-species of the Hoary Marmot. Many people mistake marmots for badgers or wolverines, but badgers and wolverines are  relatives of weasels. Marmots are rodents, like big fat squirrels. In North America there are Hoary, Yellow-bellied Marmot, and Woodchuck, also called Groundhog. Hoary Marmots are further divided into the nominate form, Olympic, Vancouver, and Alaska sub-species. Marmots frequent rocky outcrops in mountainous regions, while Woodchucks prefer the lowlands.

A detail of the above painting. In the previous blog post I referred to the importance of paying attention to tonal values, (which I did'nt do with the trogon). I did keep tonal values in mind while planning this one. Notice how the marmot's head stands out being lighter in tone than the background rocks. Yet the background rocks are much lighter in tone than the dark markings on the marmot's face. 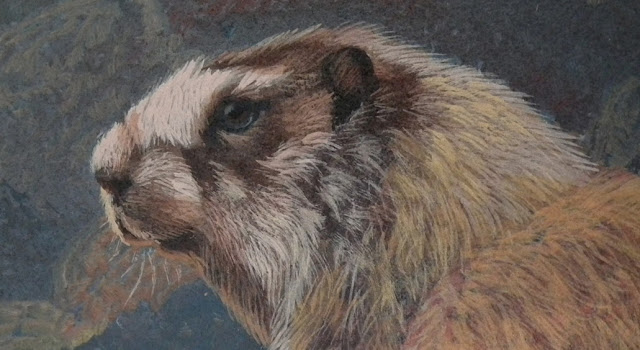 In the beginning I used to obsess about the surface detail of my subject. Getting fur to look like fur, and feathers to look like feathers was the big challenge. I just did not realize that the trick to gettong surface texture right lies in getting the underlying foundation right.
When you paint the tonal values in first, adding fur is simple and often takes few brush strokes to create the illusion of fur. It is crucially important to pull the whole thing together with washes and glazes that soften brush strokes and create harmony to the overall composition.

Since this is such a short blog post, I decided to play with some close crops of some photos of a Red-breasted Nuthatch that I photographed a few years ago. 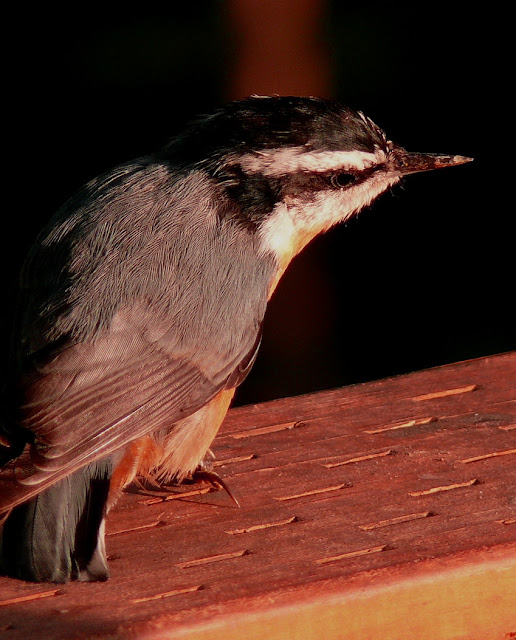 The late afternoon light was so strong on my balcony that it was a challenge to get the exposure right. The effect looks like some of the works of the old European masters who often painted a subject lit only by one candle. 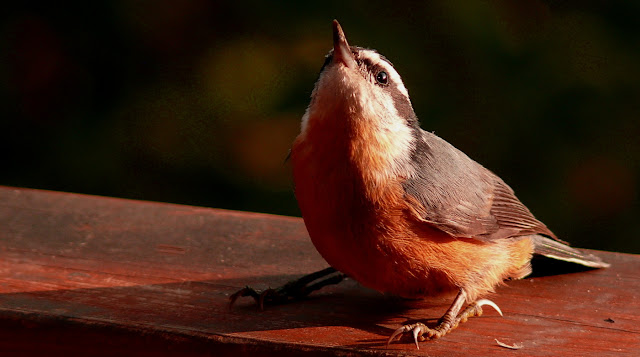 I quit feeding birds after a Black Bear climbed up to my balcony and stole all my bird seed. It is actually illegal to feed birds in the Summer months because it attracts bears to neighborhoods where they tend to get shot eventually.
Posted by john at 3:39 PM

What a splendid little piece of the marmot John! I appreciate reading about your painting process.