There is one bird species that is the main target of virtually every birder that comes to Uganda. It is a very uncommon, and unique bird that basically can be seen nowhere else. Mabamba Swamp, about 40 km out of Entebbe is the most reliable and accessible place to see it. Local entreprenuers have taken note of that fact and set up a small industry that caters to visiting birders.
They see you coming down the bumpy dirt road leading to the swamp, and race ahead of you on their motorcycles. At the end of the road is a small collection of rickety wooden boats. The several competing guides eagerly try to win you over by bragging about their expertise as bird guides. I believe they have a set, (reasonable) price and I imagine that any one of them would be an excellent guide. You actually get two guides for your money, one to talk, the other to paddle the boat.

I'll get to THE BIRD later but first you have to read about some of the more common denizens of Mabamba Swamp, like the African Jacanas trotting atop the lily pads in the above photo. 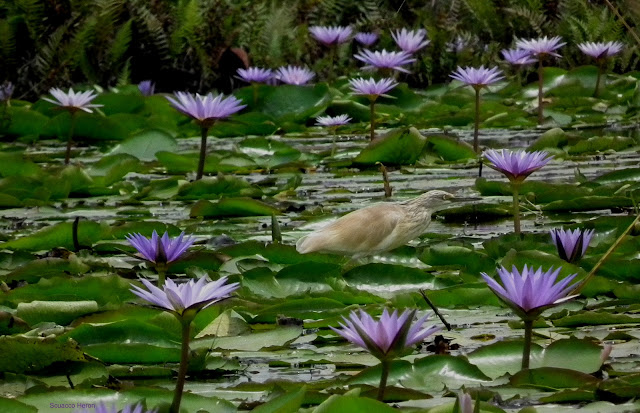 A Squacco Heron also forages amoung the lillies. 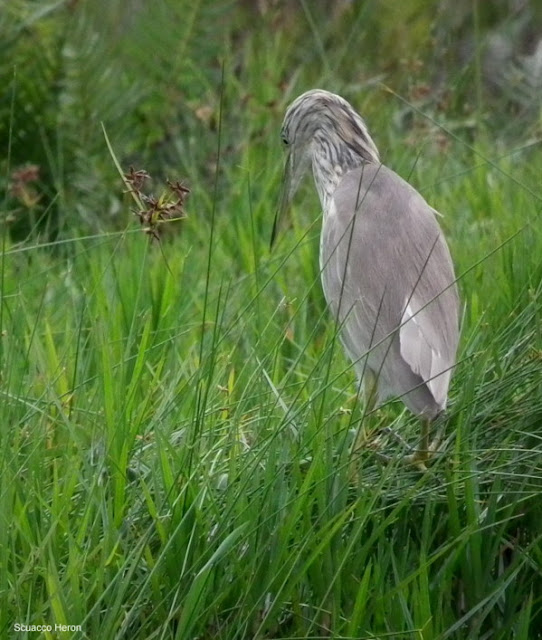 Another view of a Squacco. 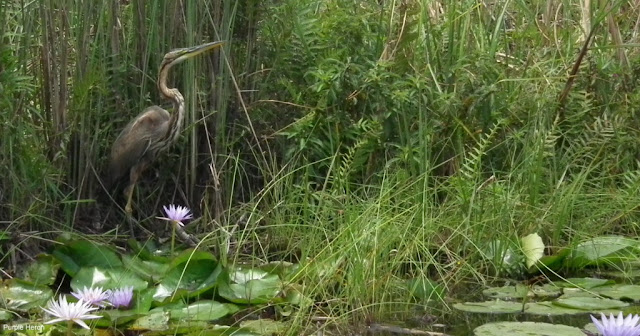 A bird that I first saw in Cambodia, where it is quite rare, Purple Heron. Bigger than a Squacco, but smaller than the Black-headed, and Grey Herons that share the same habitat. 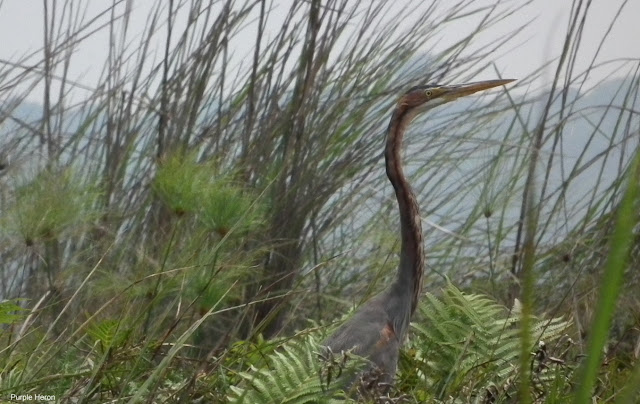 The Purple Heron, closer to our boat.

A new bird for me, Black Crake. It is less shy than other rails and crakes. 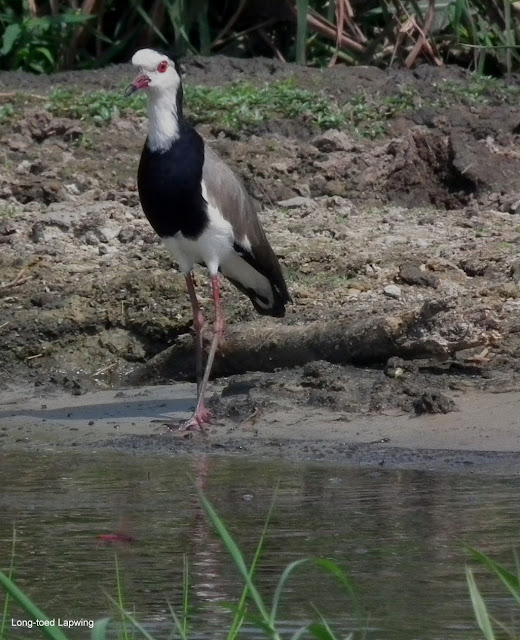 Another new one, Long-toed Lapwing, (plover). 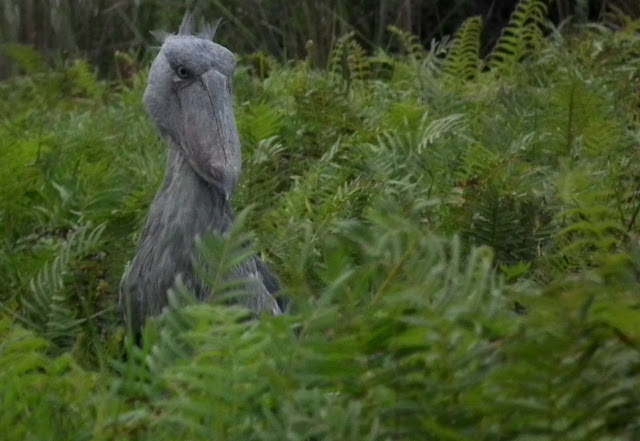 Here it is, the Shoebill. It looks like a cartoon version of a heron to me. Shoebills are like California Condors in that they are scarce, long-lived and slow to breed. They specialize in eating mainly lungfish. They are quite large. I got to witness one of them catching and eating a fish. It took several tries to get the fish down it's throat. 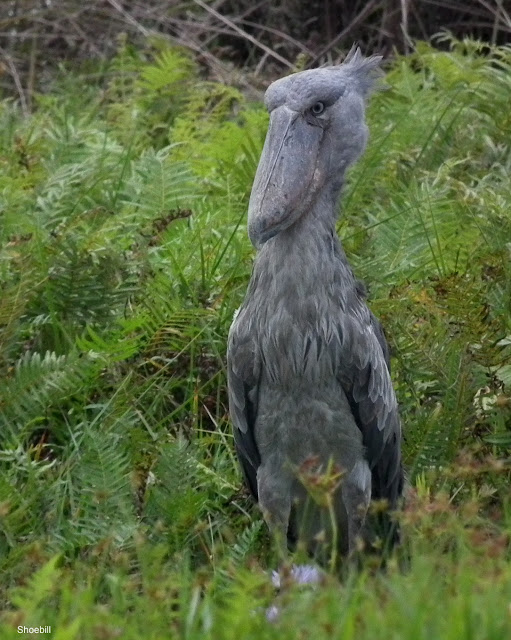 This bird is worth a second look. This is a male. 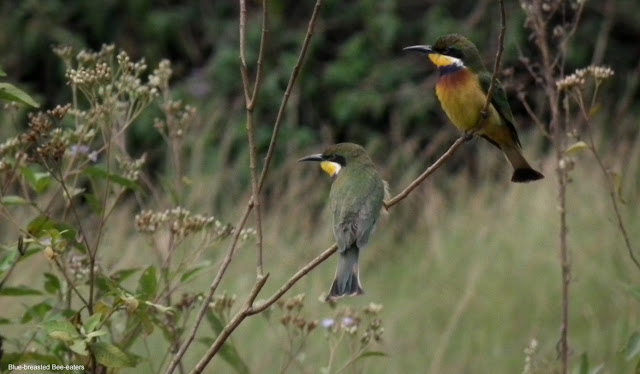 The common bee-eaters around the swamp were Blue-breasted Bee-eaters. They really only have a small dark patch below their throat that looks bluish in certain light conditions. 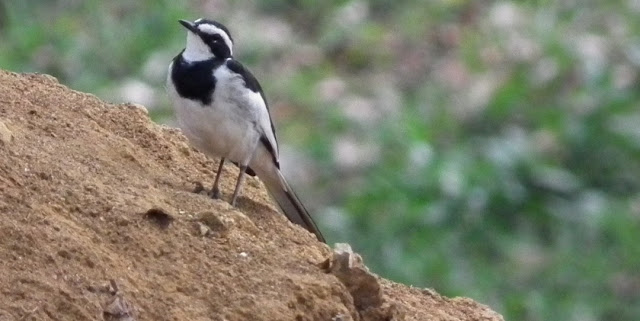 After we disembarked our guide showed us some local land birds like this African Pied Wagtail on a termite mound. One very odd behavior we noticed on our trip was that wherever we parked our silver colored rental car, a Pied Wagtail would land on out roof almost immediately. This happened virtually everywhere. We never saw them on top of other vehicles.
Posted by john at 12:22 AM

Hi John
I have been looking forward to your posts of your trip to Uganda, the pictures are so beautiful. How many new life birds did you get this trip?

Thanks for your comment Steve. I saw a total of 297 bird species, 182 of them were lifers. Both Tom and Gary saw many more birds. They have sharper eyesight than I do, more energy to boot. We also saw 33 species of mammals that we could identify. There were many more birds and mammals we either could'nt identify or heard but did'nt see.