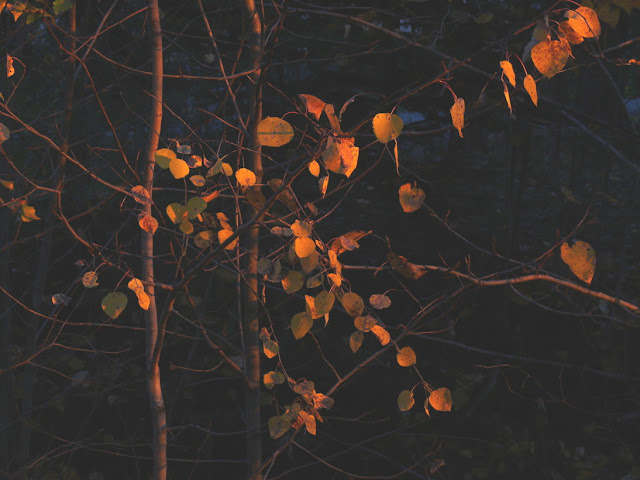 Last Friday I was kicking around for ideas to inspire a new painting. In a photo album I came across this photo. I was standing on my balcony in Eagle River several years ago, taking random photos of the Fall colors.
One problem that I encountered was trying to control the strong contrasr between sunlit foliage set against a shadowy background. The leaves were coming out too bright and washed out if I exposed for the overall scene. I had to greatly underexpose the background in order to make the leaves look right.
I like the way this photo looks, and I was wondering what kind of critter would look best in a scene like this. Some kind of bird, maybe an owl? How about a Mammal like a squirrel or a Pine Marten? These are good ideas, but I thought about doing something big like a Moose, Bear, lynx, or a wolf. Maybe it would look good if it was in brooding shadow behind the bright leaves. 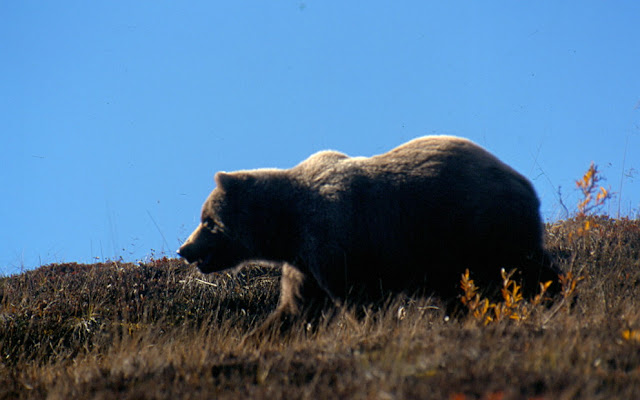 A bear seemed like a good subject to put in the scene. This is the pose that I chose to work with. 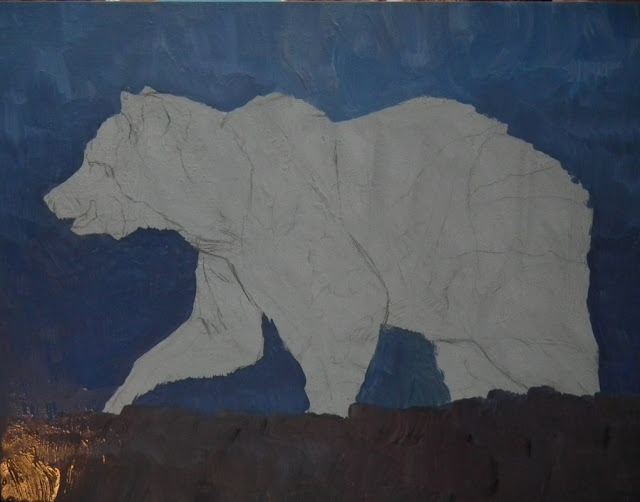 The first step was to grab a 12x16" gessoboard, sketch out the bear, and lay down a foundation of paint. 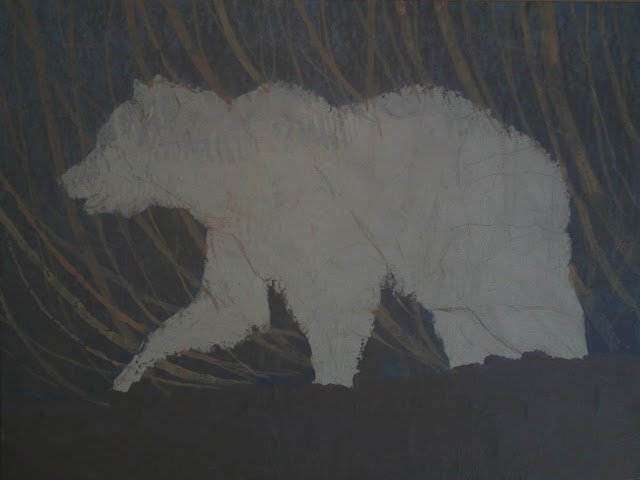 Next thing was to put some texture into the dark background. I chose to use Alder branches. I did'nt even bother with details like foliage. 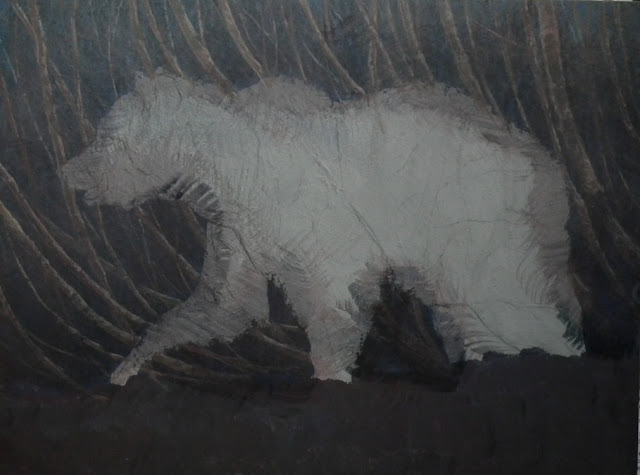 At this stage I did add some detail to the Alder branches. I put some light highlights on the branches, and I put in some dark mottling. 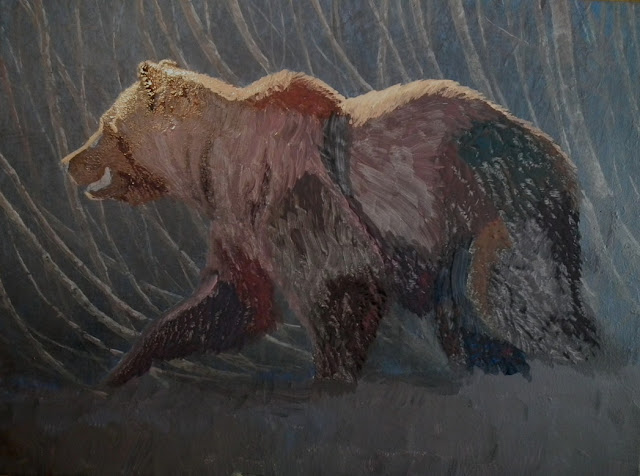 Now it was time to lay down some paint on to the bear itself. What a mess. The painting looks hopelessly bad at this stage. 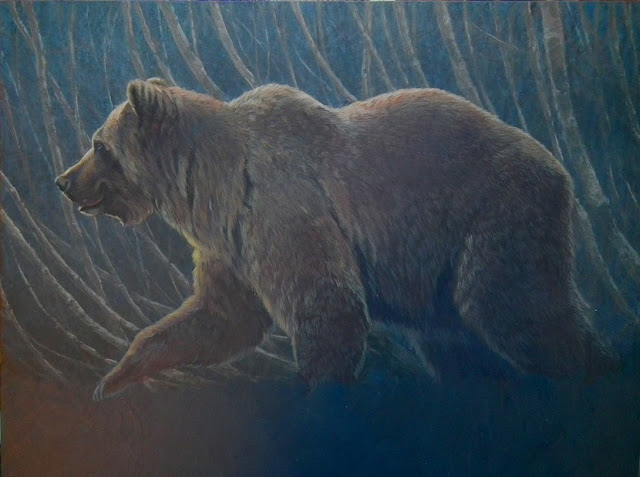 Some much needed refinements on the bear. It still looks, not too good. 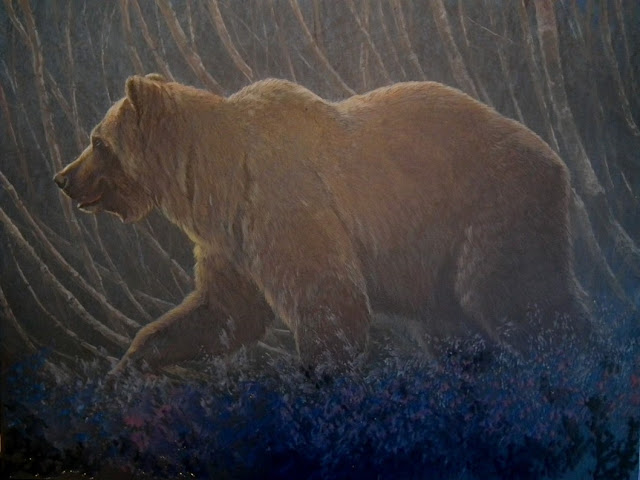 So, the bear is now good enough, (barely) to leave, and start on the foreground. 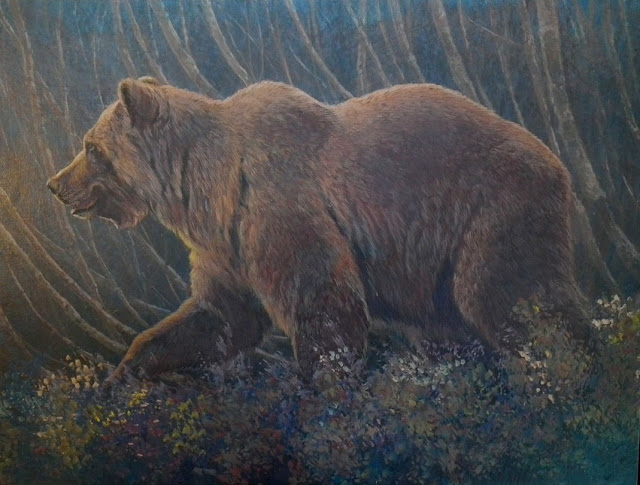 At this stage I did some more refinements to the bear, that did'nt help, and started adding highlights to the foreground vegetation. 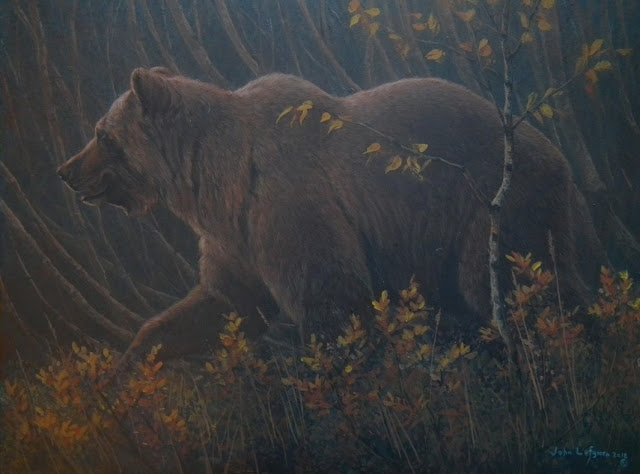 The finished product, A Big Ol Bear, 12 x16". The painting is too dark, and looks nothing like what I invisioned. I was afraid to make the bear even darker in order to recreate the lighting of the original photo. I made the Birch tree as bright as I could make the paint be, although this photo does'nt adequately show it.
Maybe I'll rework the tree to make it more dominant in the painting. The leaves should span the whole painting. Would that help, or ruin the whole thing? Time will help me decide whether to make changes or not.
Posted by john at 5:48 PM

Thanks for this post, it was very interesting to me to see the transformation as you progressed through the painting. Some day I really need to take a crack at oil painting. I have done some water colors and, pencil, colored pencil and computer painting. Nothing even close to your amazing oils. What I really need to do is take some art classes and learn the techniques. The most I have ever done is watch old Bob Ross reruns, but his style of painting doesn't have the intricate detail of yours. I also enjoyed the Puffin and Sandhill Crane paintings.

Thanks again for sharing
Steve

Steve, Thanks for your comments. I really like your computer generated bird paintings.
I do acrylic, not oil paintings. Oils take too long to dry. Some of my earlier posts go into detail about how I paint using lots of glazes and washes.

John, I would leave the bear painting as it is - I think it looks great! As for using the photo, how about a female cardinal sitting on one of the branches on the right side? The colors of the cardinal would go very nicely with the colors of the photo - great shot by the way, wish I had taken it!!

Thanks for the suggestion Jeremy. What a coincidense, I have been contemplating a Cardinal painting. Although I am currently working on a Red-breasted Nuthatch in a different setting.
This actual bear painting looks much better than the photo. The Birch tree is much brighter, and the bear has more refined detail than can be seen in the photo.

wow!
Yours paintings are really good. I started painting myself 2-3 years ago, but only nature-landskape. I wish to have some good teacher who show me all technic for paiting.
I like the way you are showing the proces of your paint.
I will try to copy you (I mean your technic) to get better result of my own painting.

I really love your blog.

Thank you for your kind comments Sylwia. My ancestors come from Sweden. Go to the very beginning of my blog. Many of the early posts explain my techniques in more detail.