The Most Haunted Place 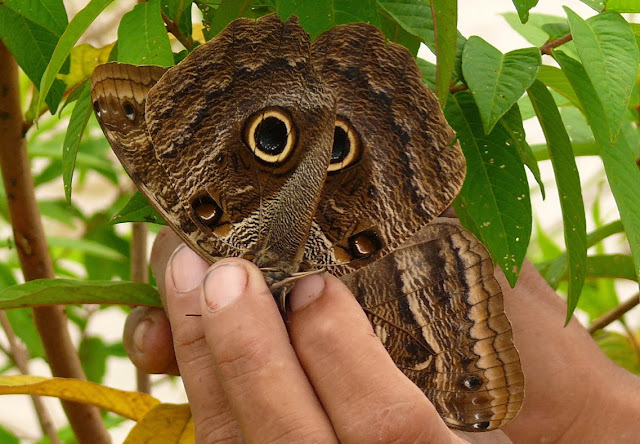 I don't know about ghosts and witches but this place is full of spooky, or at least creepy creatures. Throughout the years I have visited many tropical locations where the nocturnal sounds emanating from the rainforests were almost drowned out by the deafening screams of creatures right inside my lodging. I tend to like spiders and snakes and such but sometimes it can all be a little overwhelming.
The one place that is the subject of this Halloween post was the creepiest of them all. I did not see any owls but there were Owl Butterflies such as the one being displayed by my guide Lenin. It is not at all spooky. 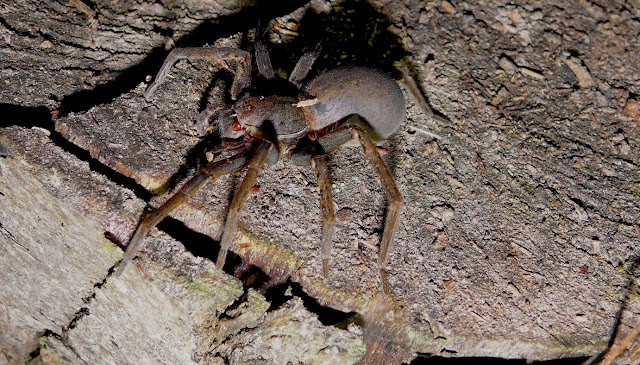 Unfortunately I do not remember the name of the bargain ecolodge where I stayed but I do remember that it was located on the banks of the Cumaceiba River about 60 or so miles out of Iquitos, Peru. What I do remember was the super-abundance of spiders all over the place. When I opened my suitcase at the end of the day, two large spiders such as the individual above popped out of my suitcase and ran up my arm.
The flooded forests all around the lodge literally dripped spiders. We spent our days exploring the Varzea forests in leaky dugout canoes. There were so many spiders that we could not keep them off of us. We had dozens of spiders crawling all over us at any given time. Thankfully they did not bite.
The same could not be said about the tiny ants that also covered us from head to toe. Their bites did not hurt but the Formic Acid that they exuded burned my eyes and caused my rain parka to dissolve. Those were uncomfortable days and nights. 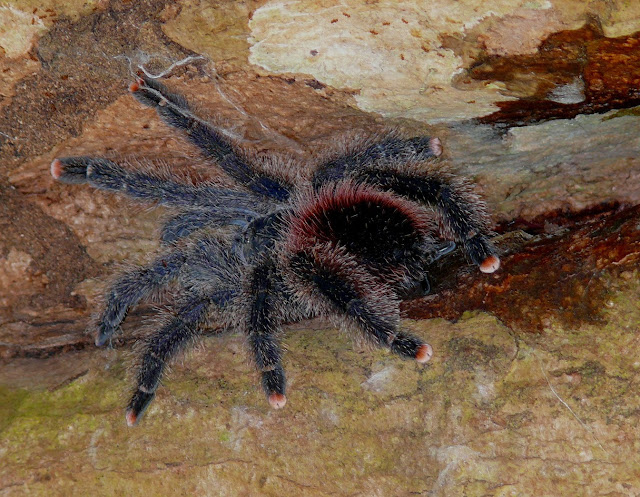 There was a good representation of tarantulas, the most common being the inoffensive, Pink-toed Tarantulas.   On one occasion I was sitting at dinner next to a Canadian couple. A Pink-toed Tarantula dropped from the thatched roof and landed right next to them. I gently picked it up and put it back in the thatching. 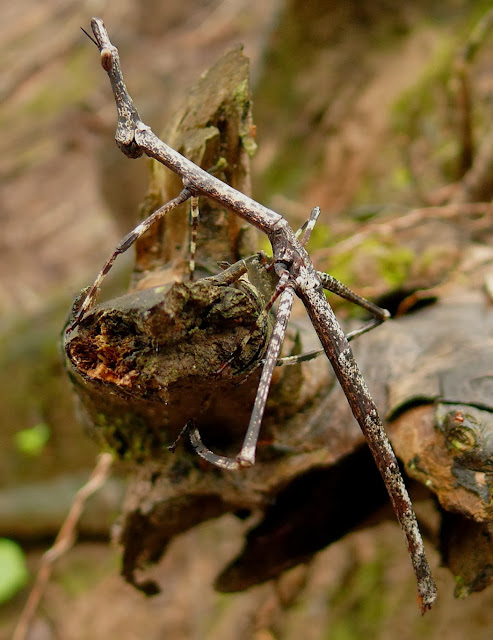 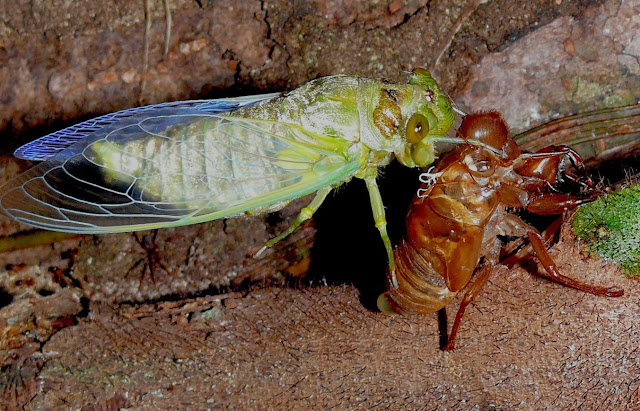 This cicada has just emerged from its larval exoskeleton. It was about four inches long. Notice the tiny spider just below the cicada? It looks like a baby tarantula. 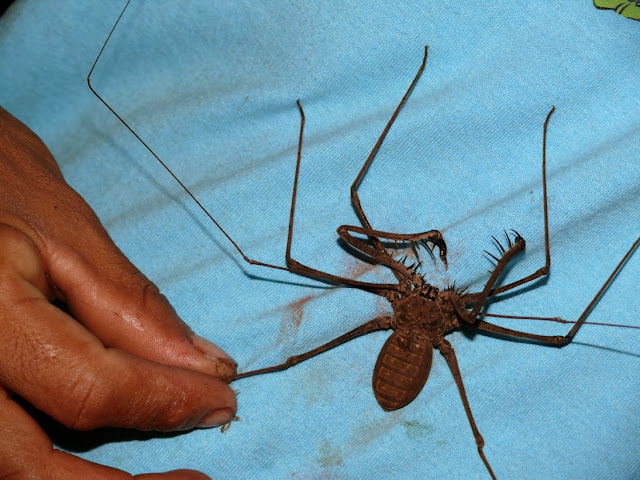 Do you know what this is? It is a very large, Tail-less Whip Scorpion that my guide Lenin is holding against his shirt. It is quite harmless. 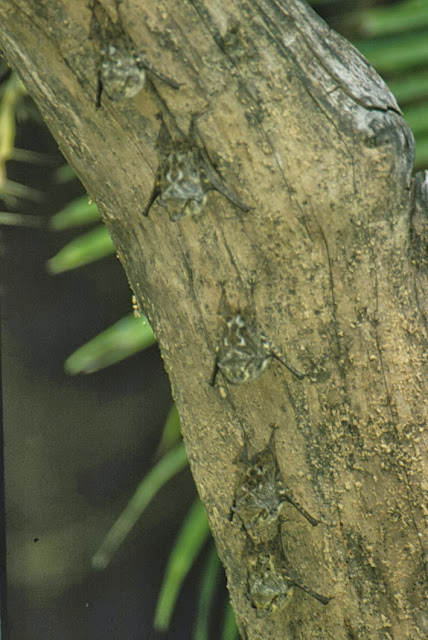 Along with the myriad of spiders, there was an abundance of bats, like these Proboscis Bats. 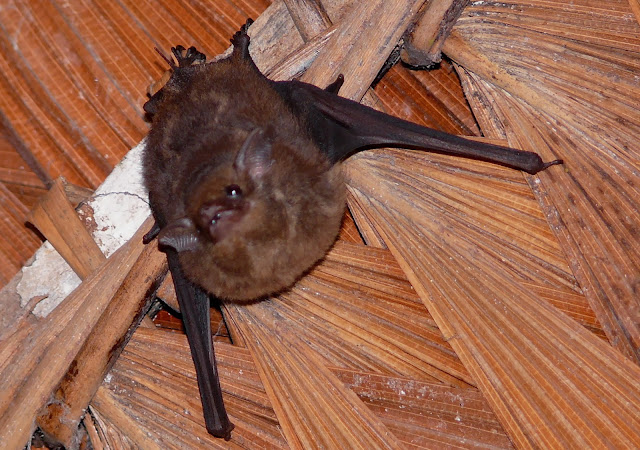 There were plenty of bats, both inside and out. I was very relieved to have tight fitting mosquito nets over the bed. Some guests had to sleep on hammocks without netting. I pitied them. 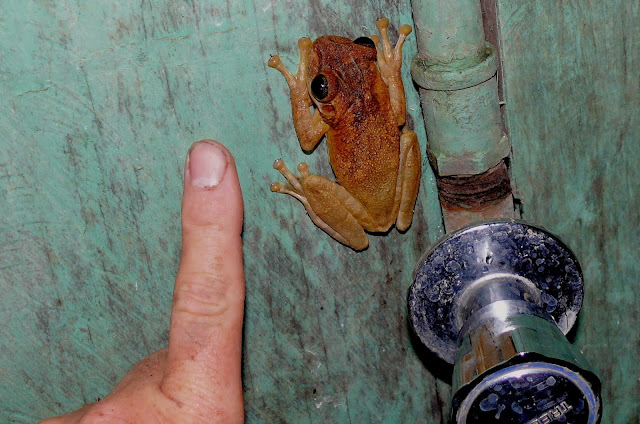 There were two large treefrogs living in my shower. Cute, not creepy. 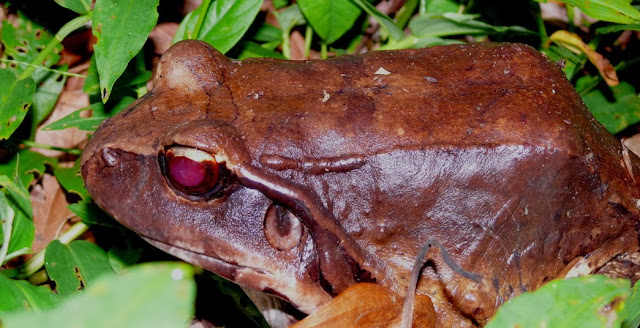 This huge, Smoky Jungle Frog was not so cute. Way cool anyway.

Most people are creeped out by snakes. I love them, and was thrilled to see this Green Anaconda. By the way, the guests at the lodge ate local cuisine; Fish out of the river, venison, caiman, and anaconda. Anaconda is delicious, but rubbery. 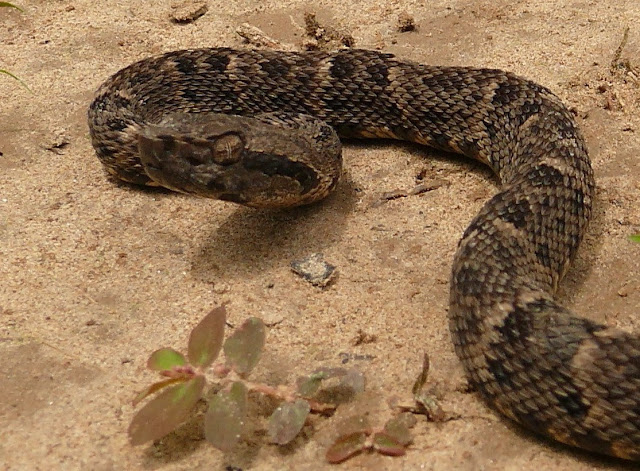 This snake, the Fer-de lance, (Bothrops Atrox) is responsible for more human fatalities in Latin America than all the other venomous snakes combined. This small individual had a very calm temperament.
Happy Halloween!
Posted by john at 10:29 PM

Most interesting blog with great pictures and art work. I've only been to Alaska once so vicarious will have to do for now...:)

Thanks for your comments.