Brooks Camp and back 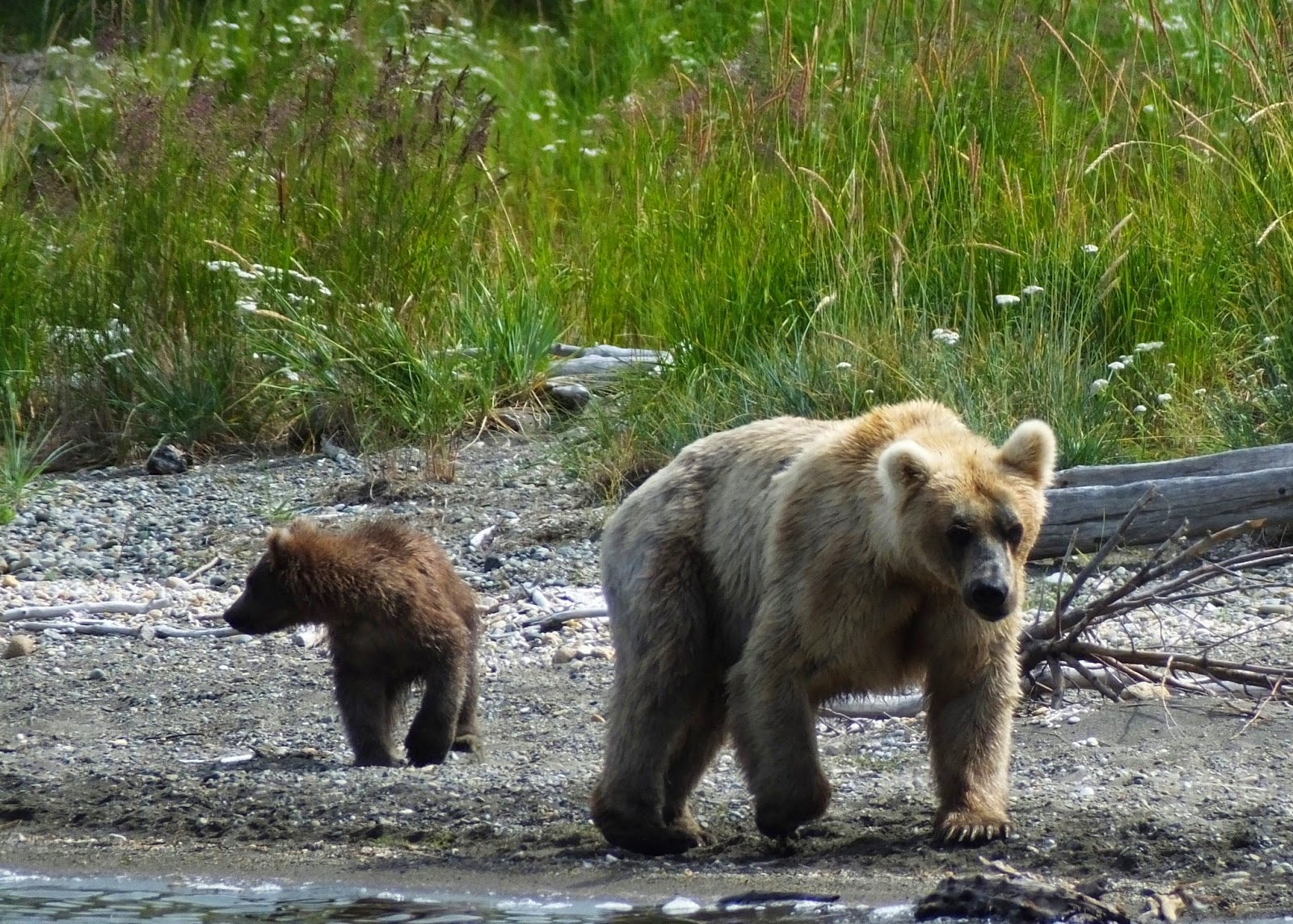 We left off the last post with this mama bear and cub walking along the far bank of the river mouth. They steadily came closer and I was thrilled. 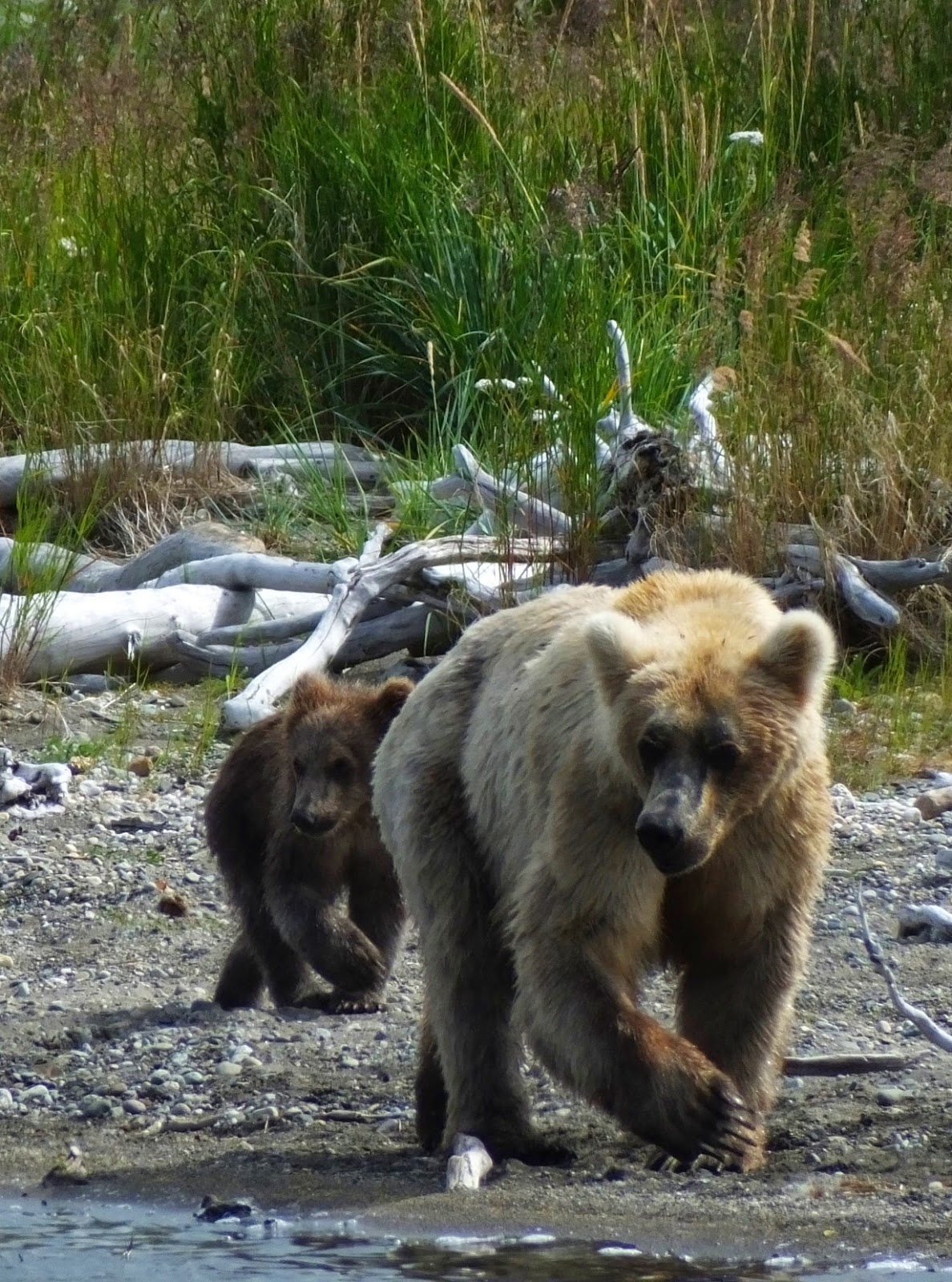 I love the way that the cub mimics its mother stride for stride in this photo. They kept coming closer. 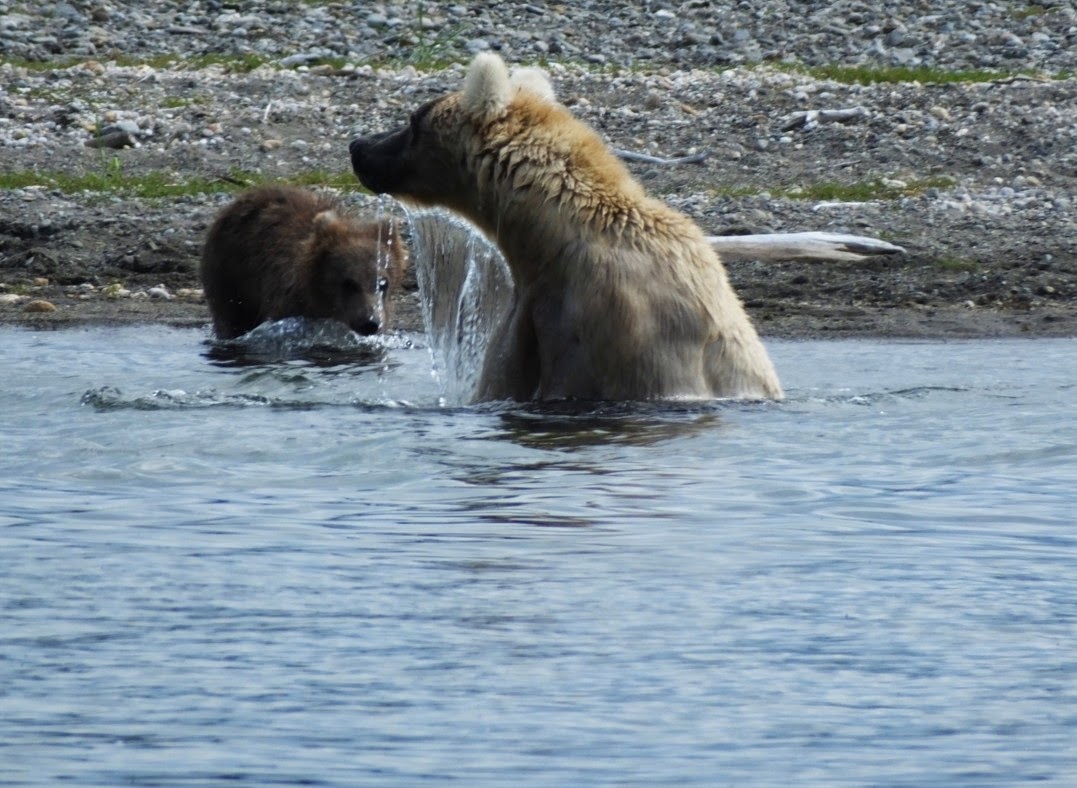 Then they entered the water and the park ranger with us started warning us to get ready to move. I completely ignored him. 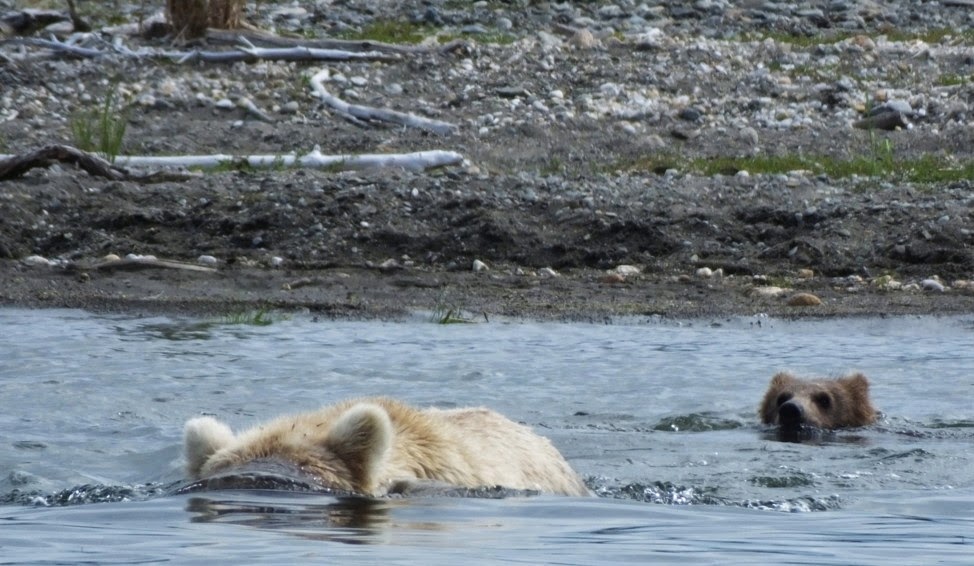 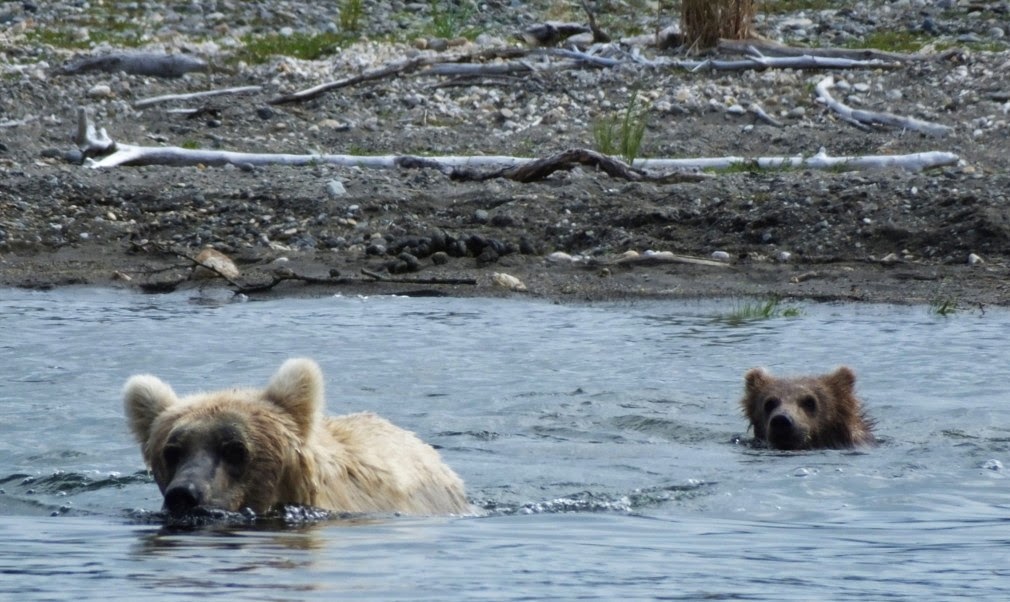 At this point the ranger started ordering us to retreat. I was so intent on getting photos that his words were merely annoying, like a mosquito buzzing in my ear. 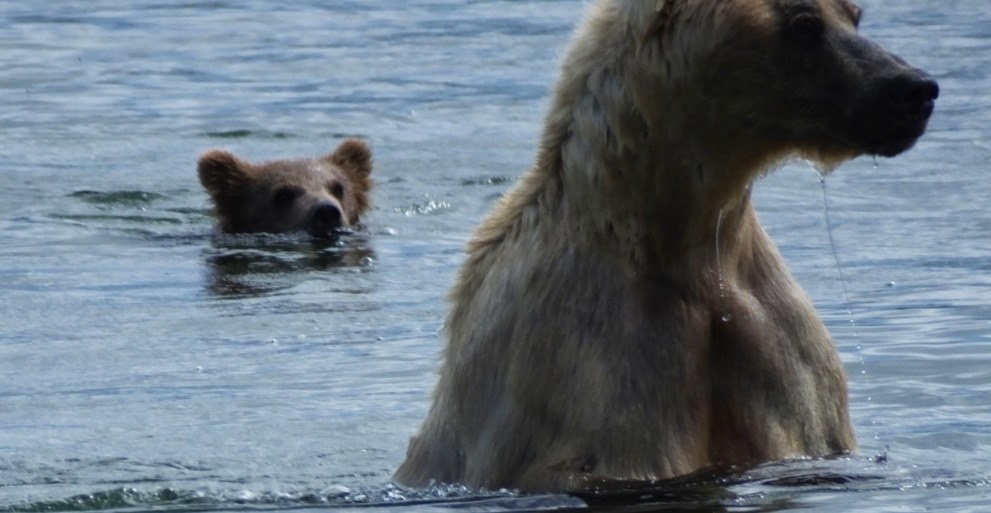 At this point the ranger was nearly apoplectic. I told him to relax but moved back anyway. He led us all the way back into the trees where we could no longer see the bears. I thought that it was an even more dangerous situation because we could not see where the bears were, but I did not waste my breath arguing with him. The bears were not concerned with us at all.

All too soon it was time for us to leave. On the way back we passed by another active volcano, Mt. Augustine. It forms its own island.

I had bears and salmon on my mind as we flew along the coast of Cook Inlet. We were too high up to see bears but I imagined that this stream was full of salmon, with many big bears catching them. 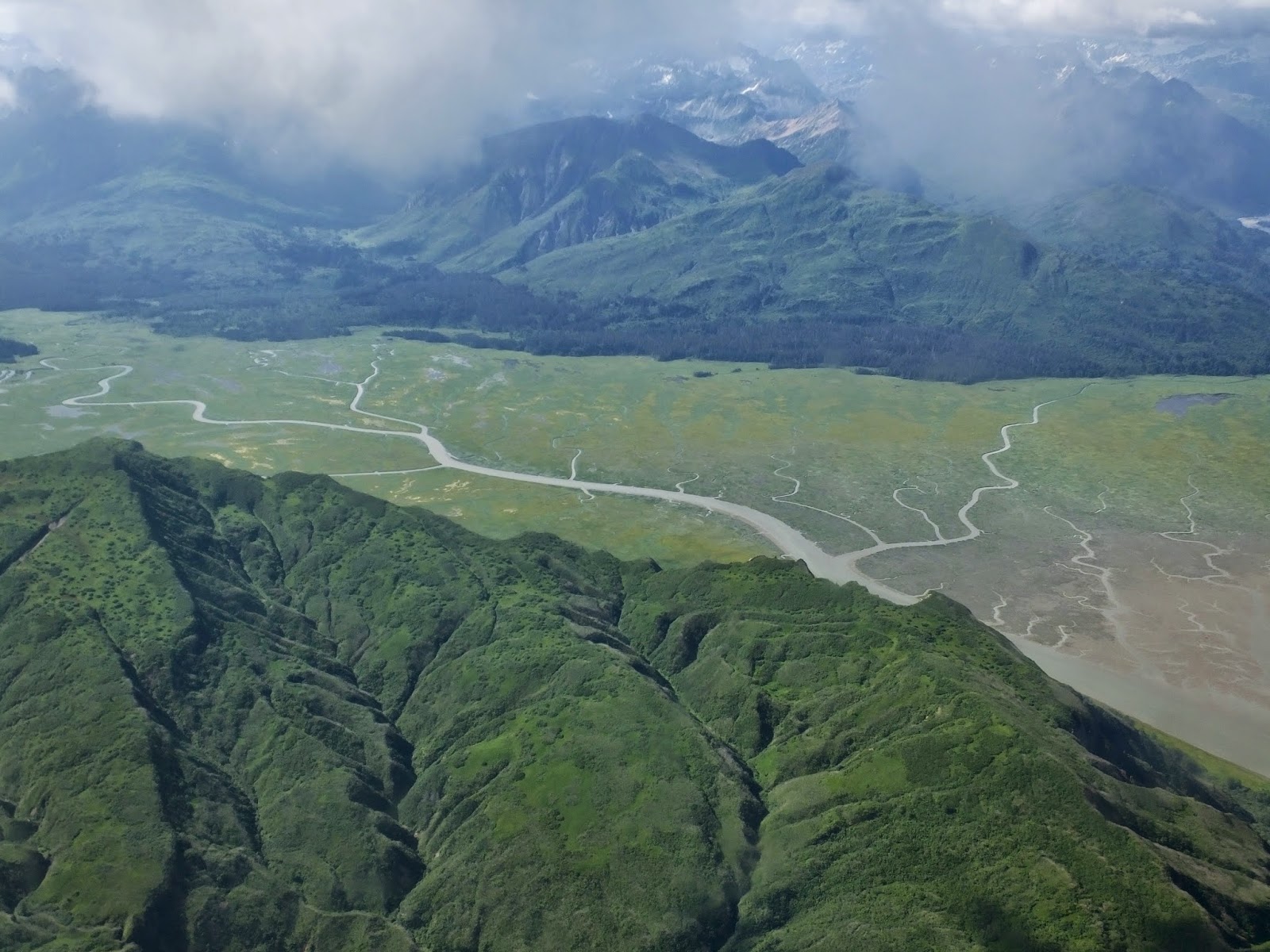 Another large green meadow that must be prime habitat for Brown Bears. There were no roads to be seen anywhere. 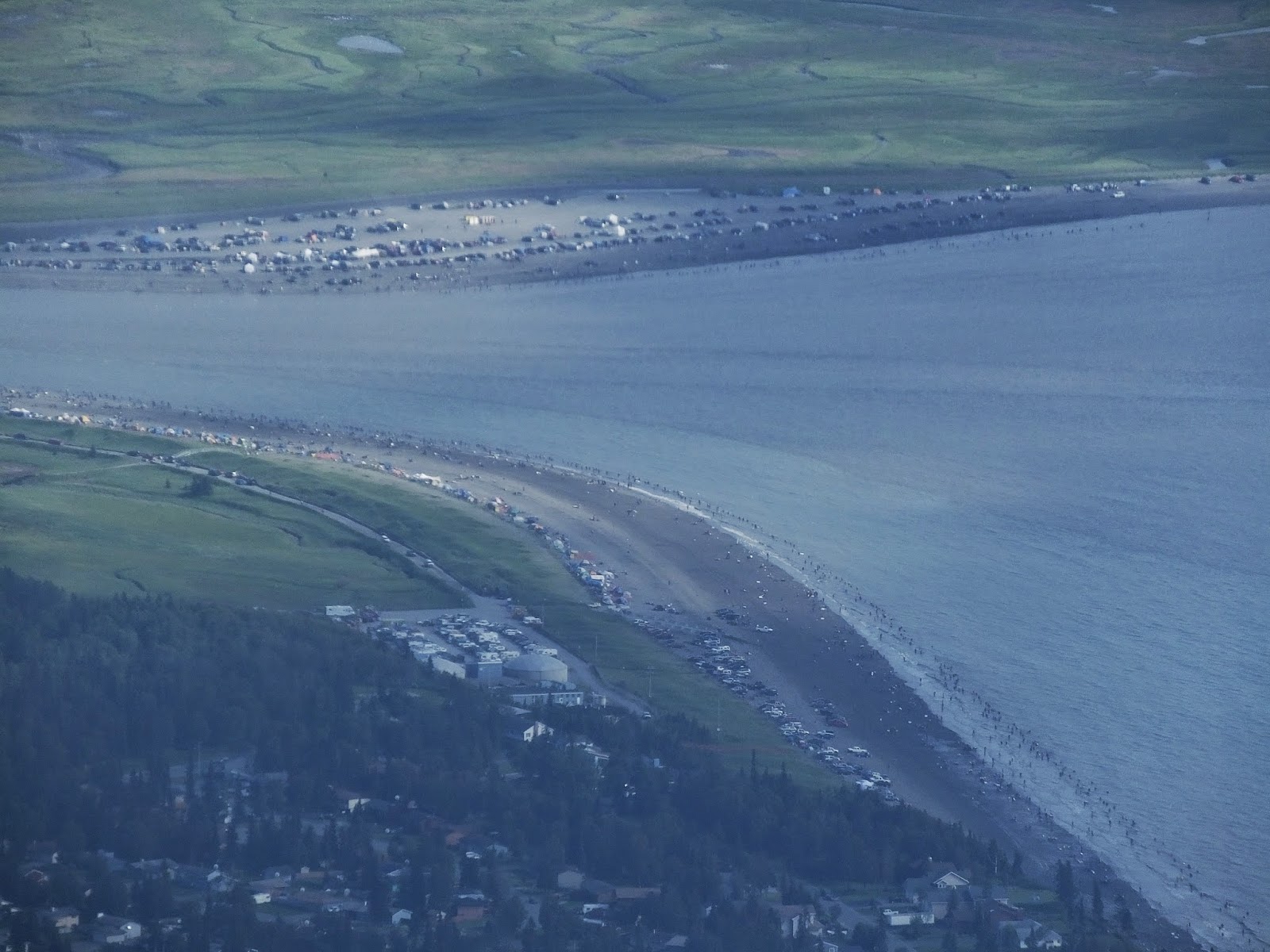 Eventually we crossed Cook Inlet and passed by the mouth of the Kenai River. You can easily see all the cars in this photo, but look closely, there were thousands of people standing in the water. These are dip netters. The Kenai River is famous for combat fishing. That is where hundreds of fishermen stand shoulder to shoulder catching salmon.
Dip netters have a net, about six feet, (two meters) in diameter attached to the end of a pole. They wear hip waders and walk out into the calm surf to snag passing salmon. Each person generally takes home 30 or 40 fish for the freezer. That speaks to the immense number of migrating salmon. This has been going on for decades and the fish still keep on coming. Only the Chinook, (King) Salmon numbers are declining. There are strict controls on fishermen regarding King Salmon.
I think that I will go on another bear viewing trip next Summer. Maybe back to Brooks Camp, maybe to another location. I can hardly wait.
Posted by john at 3:30 PM

I love the beautiful landscapes of Alaska,in certain sense it looks like many parts of central east Siberia but with a lower mountains full of canyons and river gorges.¿John,didn't you take this photographs of this bear in to much short distance? i have understood that the minimum secure distance, its around 90 meters allways in a open space!.

What a great series. Looks like you are having a great summer. My mother, your sister came up a few weeks back. They got to see some killer and humpback whales and salmon, and deer, but no bears or moose. Our daughter finally got some snakes (four Puget garters, two of each sex in each color morph) and has been enjoying them a lot. Thanks for keeping up this site! It is awesome.

Thanks for your comment Marc. Yes we were too close. We moved back into dense forest where we could not see how close the bears were. I think that it is better to stay in the open where the bears can see us, and we can see them. The Park Ranger should have understood that as well.
Hey Jeremy, good to hear from you. When are you going to send me some new photos? I hope that you are also having a good Summer. It will be over all too soon.

A pity the Park Ranger moved you into the woods….but it's as well to be careful, I suppose.

I just saw the Disney movie 'bears'... Beatiful pics of the rivers far below. That is awsome you are able to experience some of the wonders of Alaska! Ps this is Matt