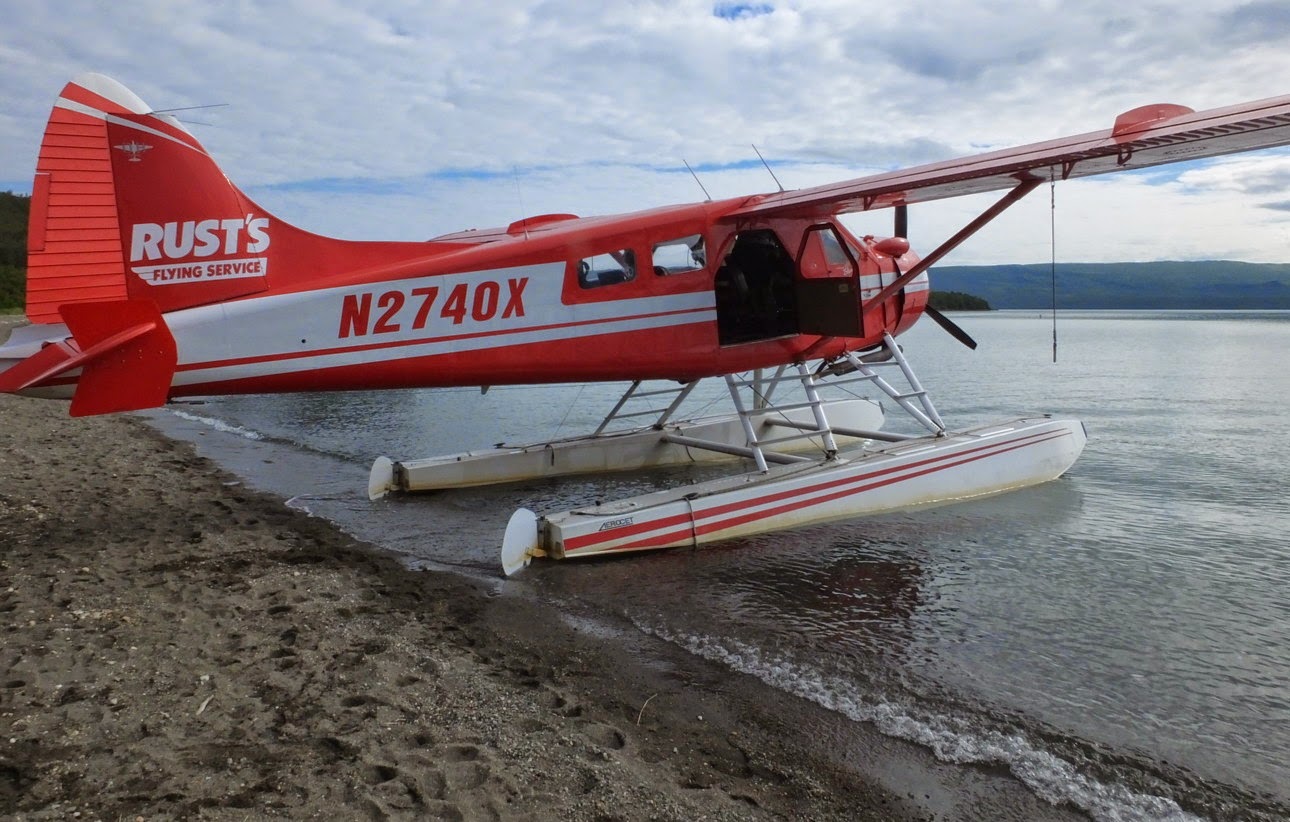 Our saga continued with our arrival at Brooks Camp on the shore of Naknek Lake. We were led from the shore into a small log cabin for orientation.  The rules were; no food inside our packs, nor inside the guest cabins. All meals were to be eaten inside a picnic area behind an electric fence. Stay at least 50 yards, (meters) from all bears, 100 yards from bears with cubs. 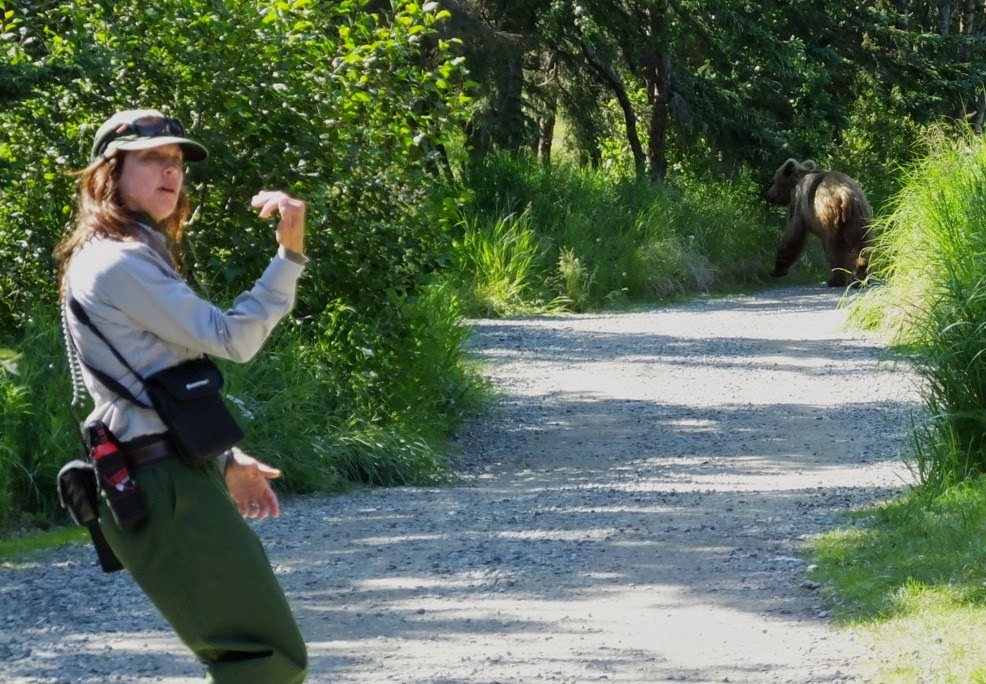 .There were at least a dozen park rangers placed in strategic locations around the camp. The young woman in the photo above was gesturing for us to hurry and catch up with this bear before it got away.
Actually she was warning us to get back and give the bear more space. Notice the bear spray on her hip. I left mine at home because I never remember to take it anywhere. 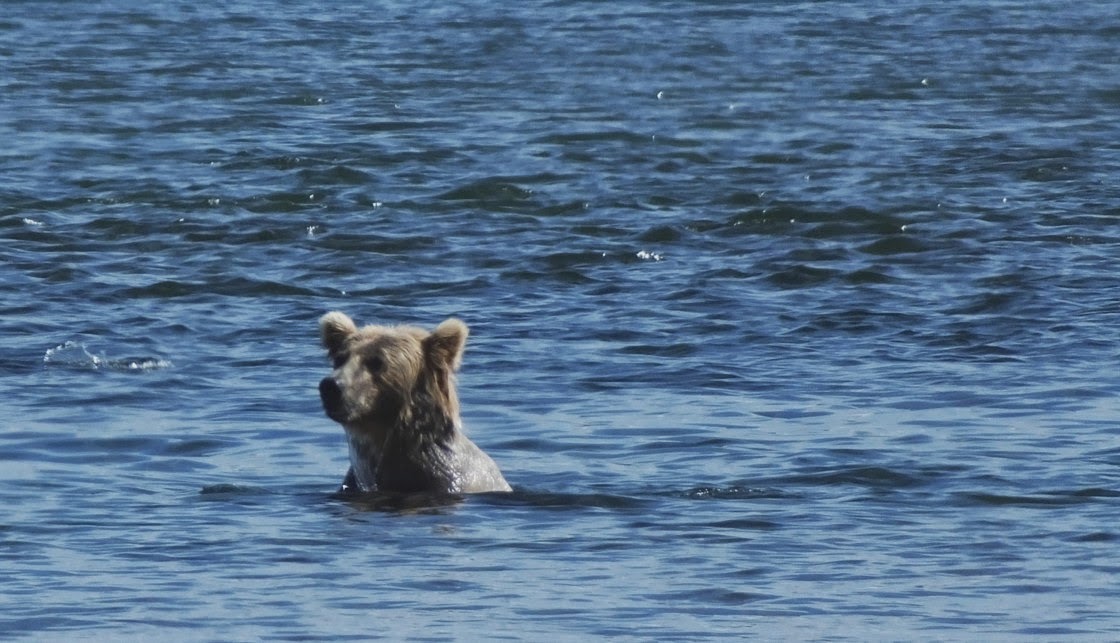 The first bear soon left and we continued on down the path which paralleled the lakeshore before it turned inland. There was another distant bear fishing in the lake. 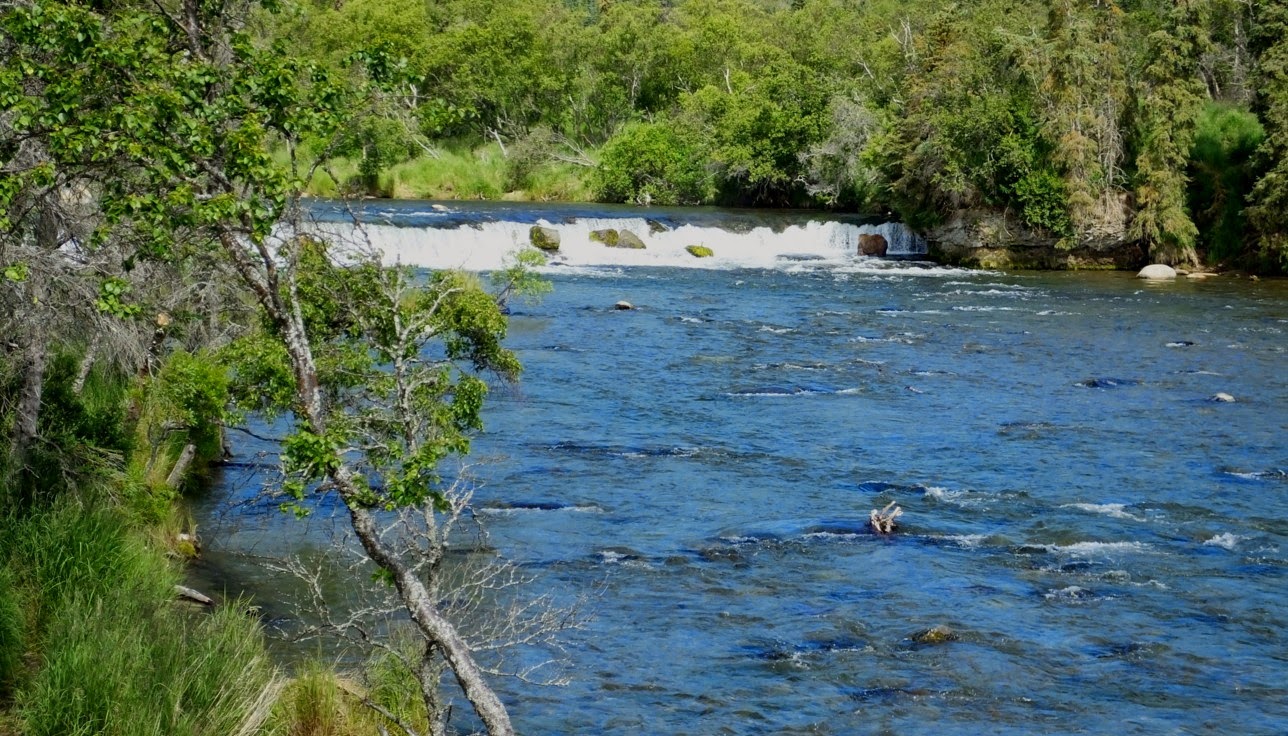 The path led for about three quarters of a mile before we came to Brooks Falls. They are not too impressive from this vantage but they are world famous. I believe that almost everyone in the developed world has seen photos of the bears catching salmon from these falls. 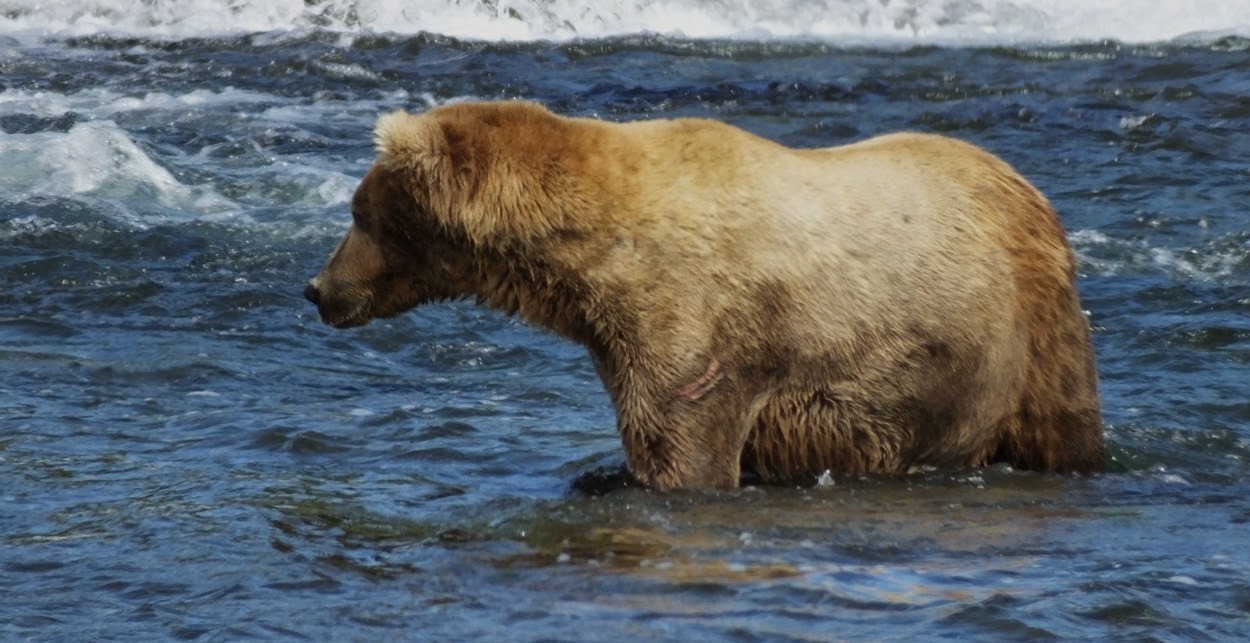 There are two viewing platforms overlooking the falls. Unfortunately there were well over 100 people there when I arrived. The upper platform, which is closest to the falls, has a 40 person limit. I waited for an hour and a half for a turn before I gave up on the idea of photographing bears from the upper platform. All of my photos are from the lower platform, 100 yards away from the falls. 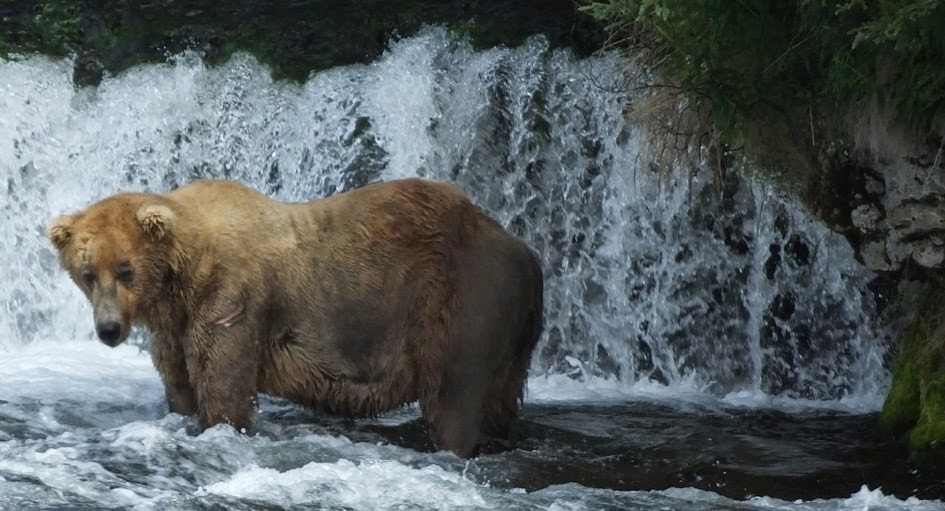 It was a hot day by Alaska standards and most of the bears were absent. There were only two dominant males at the falls during my stay, and one of them stayed out of view from my angle. 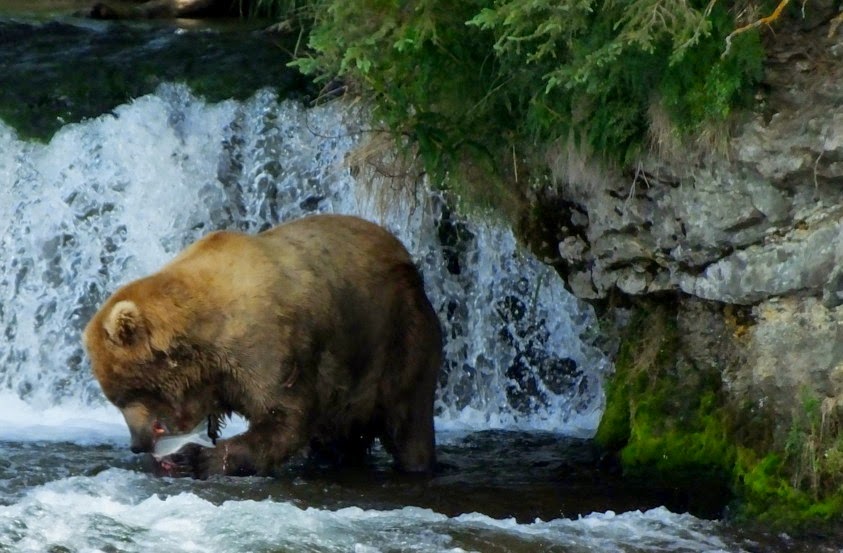 I was too far away to get spectacular shots of salmon leaping into the jaws of hungry bears. This fat bear just stood below the falls and would casually reach down and grab a salmon at its feet. 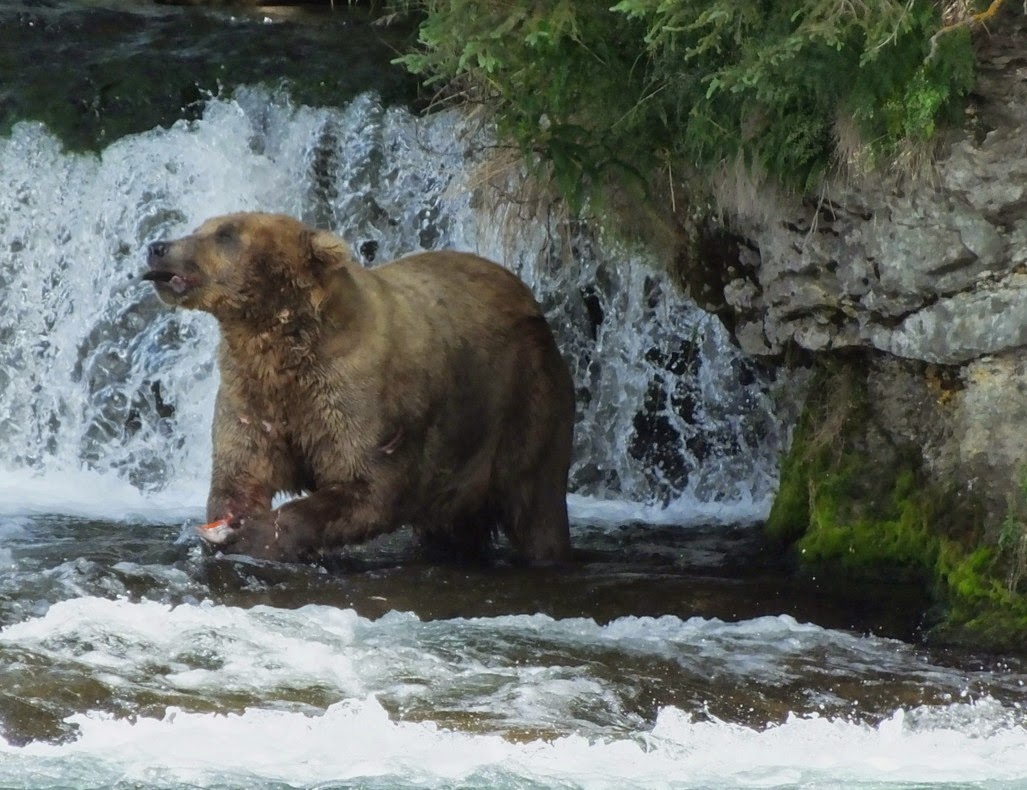 The bear would hold the fish in one paw and gulp it down in a few bites. I must admit that I was disappointed by the lack of drama and my inability to get close enough for my satisfaction. I shot these photos over the shoulders of shorter people. It was like a busy day at the zoo. 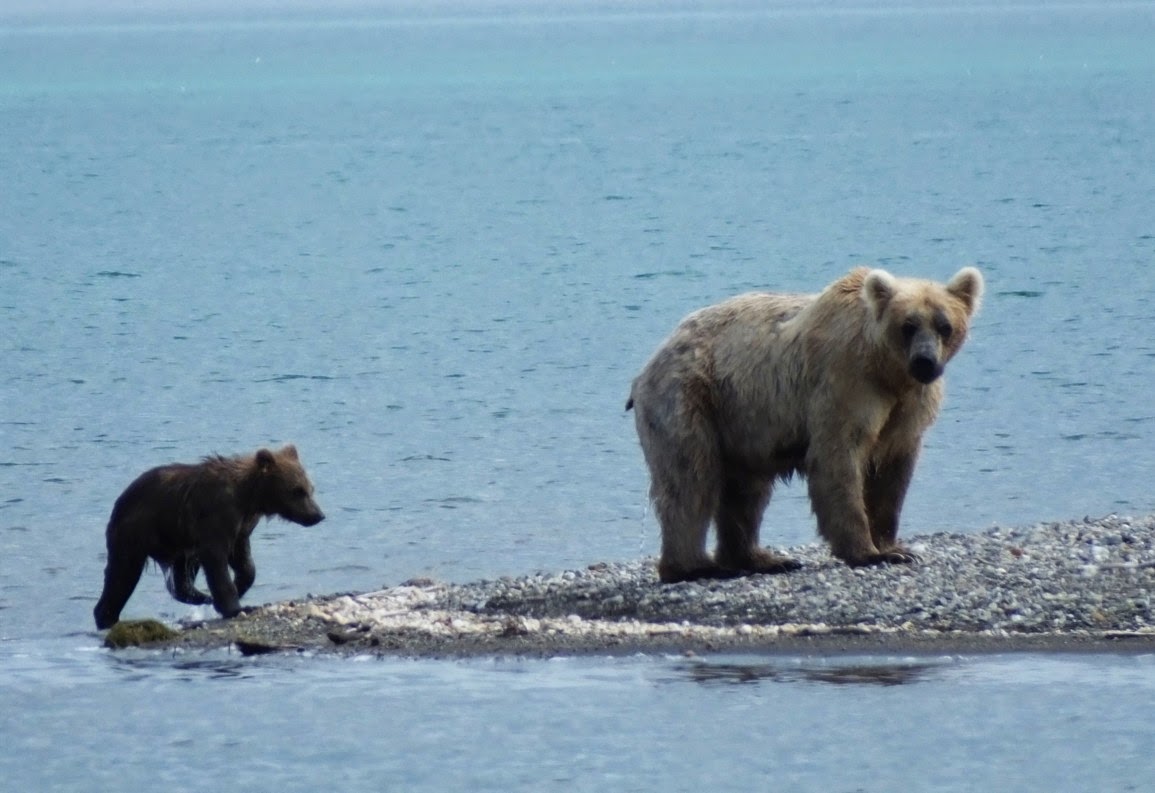 Soon enough I left the falls and walked back to the lakeshore. That is where the less dominant bears were found. This sow with her cub came swimming to the shore from somewhere in the lake. 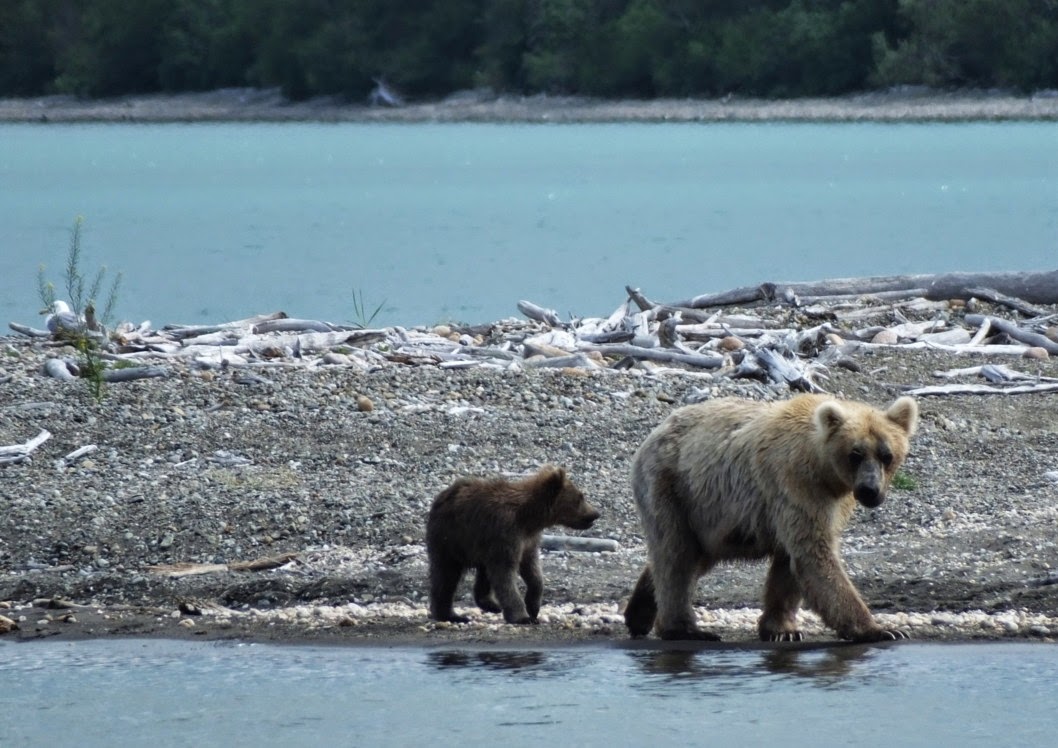 There were about a dozen other people next to me and one ranger, but at least I had unobstructed, if distant, views of these bears. Much better than the madhouse at the falls. 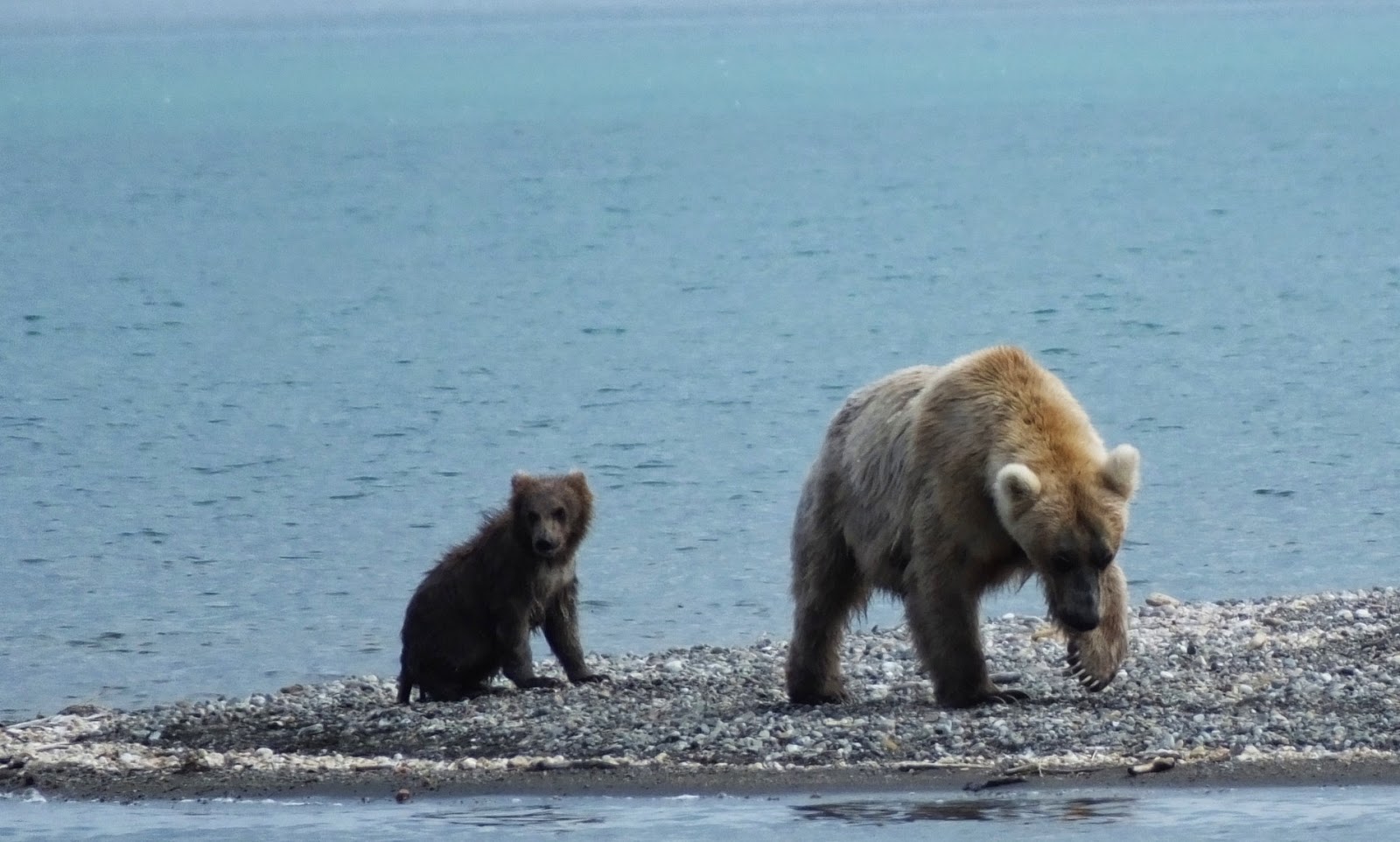 I shot many photos of this pair. 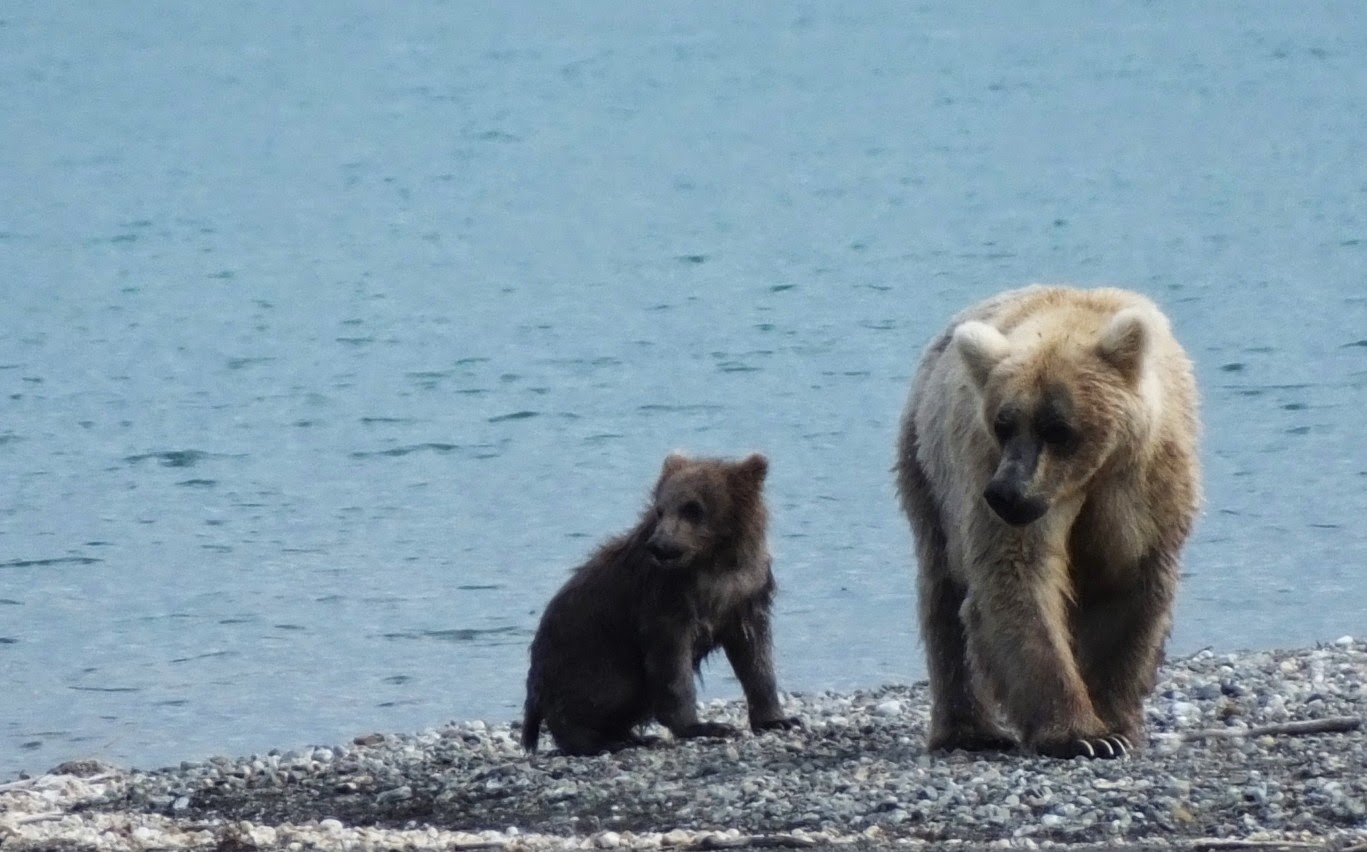 The bears were slowly moving closer and I was happy for the photographic opportunity.
More photos to come from Brooks Camp in the next post.
Posted by john at 4:49 PM

I've got a 1989 photo book by Thomas D Mangelsen featuring the Brown Bears at Brooks Falls. There was a viewing platform then, but I have the impression it wasn't so busy as you found it recently !

A pity to go so far and find it so busy… looks like a great place, obviously.

John this is the problem that i observe in much famous protected áreas,of the world like Yellowstone for example, that have a roads with a numerous cars,or Ngorongoro crater in Tanzania full of jeeps of the touroperators;in Catalonia there are a one park in the Pyreness that looks like an uthentic touristic avenue in summer times, never visit this area on this season!.This parks having a problems of massification,and become a touristic areas with a comodities and confortable structures,the fauna can suffer stress the animal watching lost naturality autenticity in this areas;i normally avoid this conditions for look animals,if you have a certain experience for observe the wildlife,its more beautiful for example: to seek information,prepare you itinerary and discover for you self or contract a guide if its necesary, construct the hide and waiting with a camouflage cloth for taking interesting photographs.

thanks for your comments John and Marc. Even at Brooks Camp, it is possible to get away from the crowds by walking along the lake shore. It is also more hazardous.