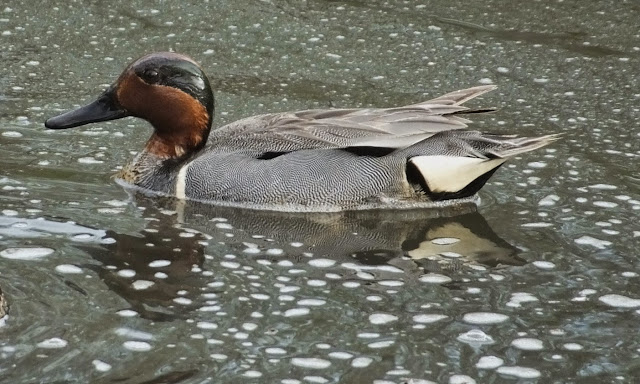 I usually try to do a blog post on weekends. This is an extra post to show the results of a minor experiment that I attempted yesterday evening. It all started because I was bemoaning the need to use a tripod or monopod whenever I wanted to use my fancy new Canon camera and lens.
I only got the new camera because I was dissatisfied by my old camera's inability to get really sharp images at full zoom. Then it hit me. Why don't I put the old camera on a tripod to see if that improves the images?
The photo of a Green-winged Teal above is one that I shot with the old HS-50 on a tripod. 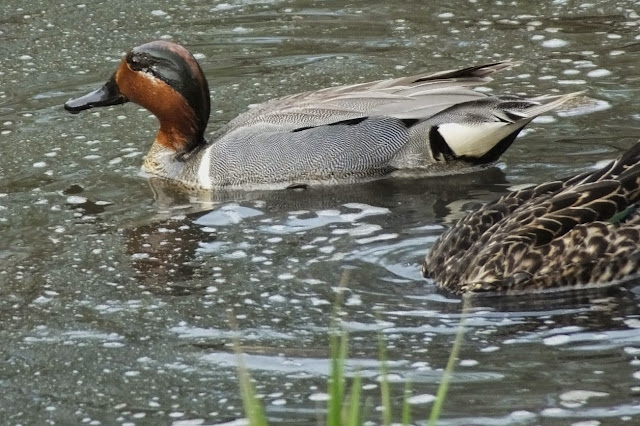 It had a mate next to it but I basically ignored her. She had her head in the water almost the entire time I was there anyway. 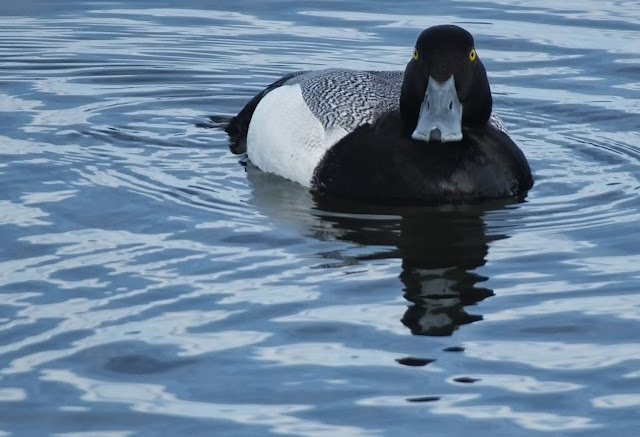 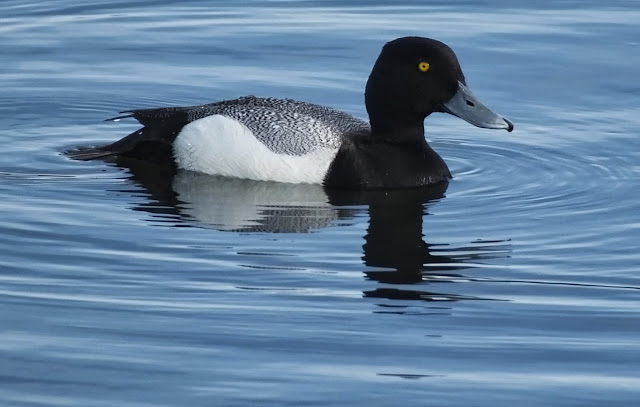 At first I thought that this was a Lesser Scaup nearby the Greater Scaup but now I'm not so sure. 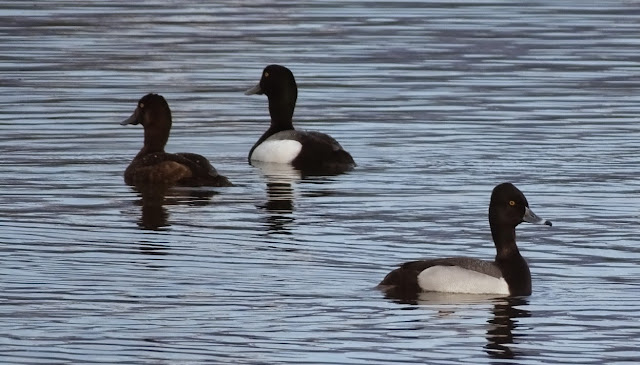 Further out there was a Ring-necked Duck near a pair of Greater Scaups. 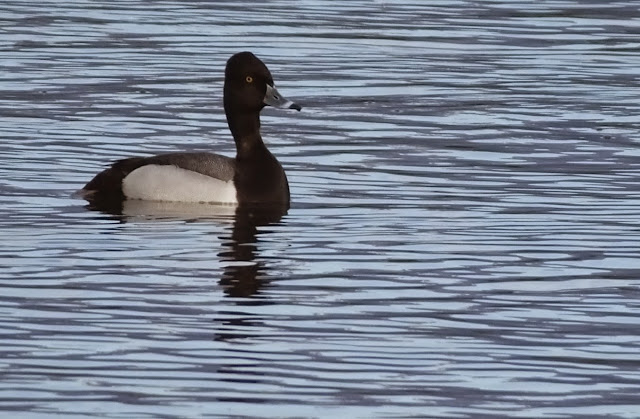 You can almost see the nearly imaginary ring around its neck. 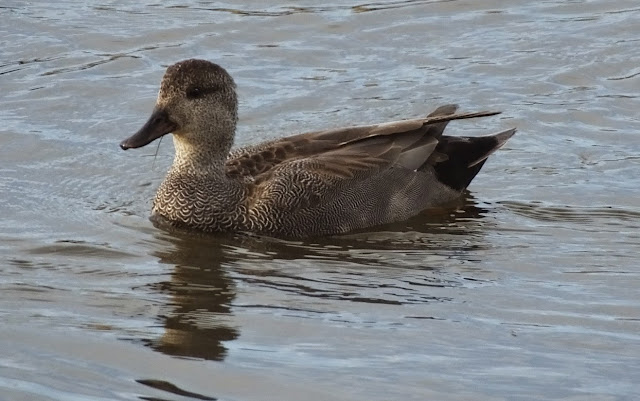 I shot this photo of a Gadwall on the same little pond where I shot the Gadwall in the last post. This duck is bigger because the HS-50 is more powerful than the lens on the Canon. This photo is clearly superior to that other photo. It is probably the best Gadwall photo that I have ever taken. 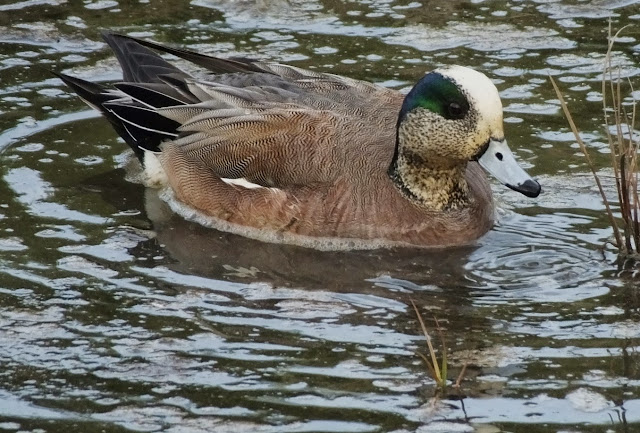 I also got a photo or two of this Am. Widgeon in poor light. 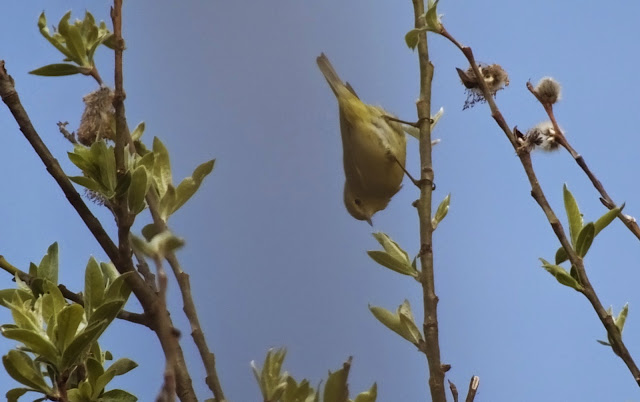 I also got this so-so photo of an Orange-crowned Warbler. 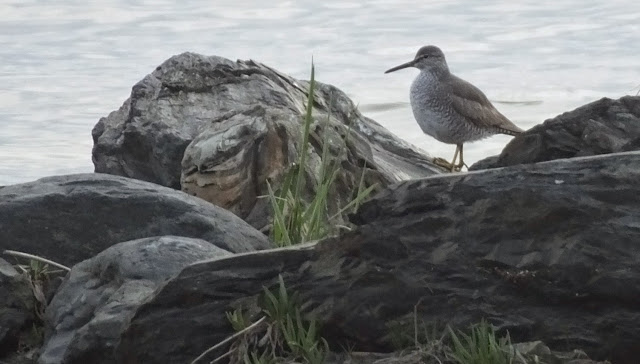 The best bird of the evening was this Wandering Tattler. It was about 9:00 pm when I shot this photo from quite a distance.
What are the results of my experiment with the tripod? The HS-50 is better when I use a tripod with it. Will I quit using the Canon? No. It has its advantages in many ways. It is good to have both cameras in my inventory.

Beautiful details, John. Did you use a cable release in conjunction with the tripod?

Thanks for your comment Maggie. My cameras do not have a port to attach a cable release. I imagine that I can get some sort of an accessory to release the shutter electronically. I have not looked into that.
I do feel very stupid for never thinking about using a tripod before this.

I'm a big fan of the old-fashioned tripod, especially in woodland or when the light is weak (or both !)

Most of the current Canon DSLRs have a slot on the left of the body, under the rubbery flap (as you look through the viewfinder) for the modern-day equivalent of the cable release, which is effectively a shutter release on a wire. My 7D Mk2 and 5D Mk3 have this feature, anyway.

John, Thanks for telling me about about the slot under the flap. I am sure that my 6D also has the same feature. My HS-50 may have one as well. Now I need to get the cable.