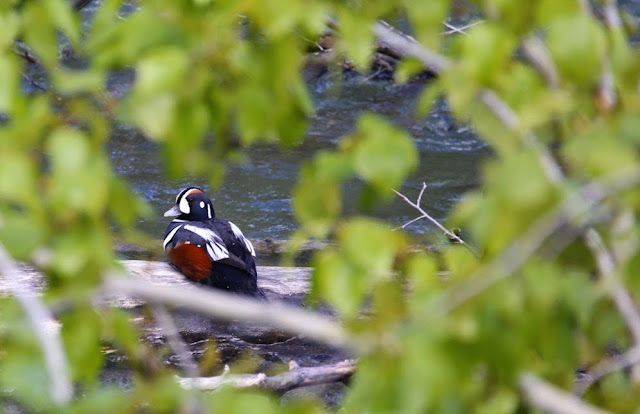 If you regularly read this blog, then you know that the majority of my local birding is done at Spenard Crossing, Westchester Lagoon, and the Anchorage Coastal Trail. That means that I neglect other prime birding locations. One that I seldom visit is actually closer to my home than the other locations, Ship Creek.
Ship Creek is a greenbelt that winds through the industrial part of town. It is a sliver of paradise in the midst of an ecological wasteland. That helps to explain why I seldom go there although I am always telling myself to go.
On Friday the office was closed so I had an extra day off. Instead of painting at home like I should have done, I took my new camera to Ship Creek. I started out upstream and worked my way to the coast, hearing loud industrial noises all around but seeing a more natural setting before me. Right away I spotted this male Harlequin Duck through the vegetation above. I could hardly believe that I was seeing a Harlequin Duck right in town. Not the first time that I have seen a Harlequin in Anchorage, just an unexpected joy in such a marginal site. 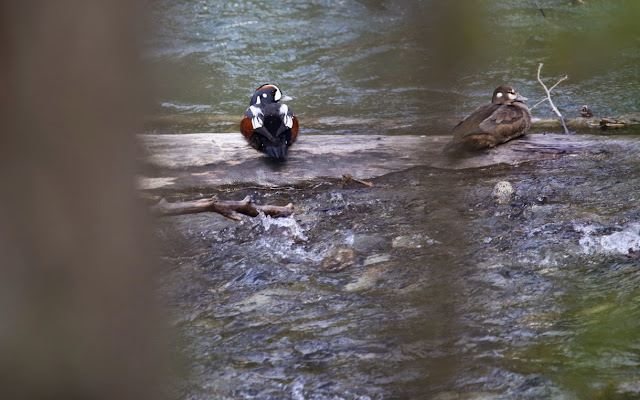 There was a lot of thick vegetation between myself and the duck. I tried to find a clear view so I moved from one vantage to another. My attention was so focused on the male Harlequin that I did not even notice the female as I took this photo. 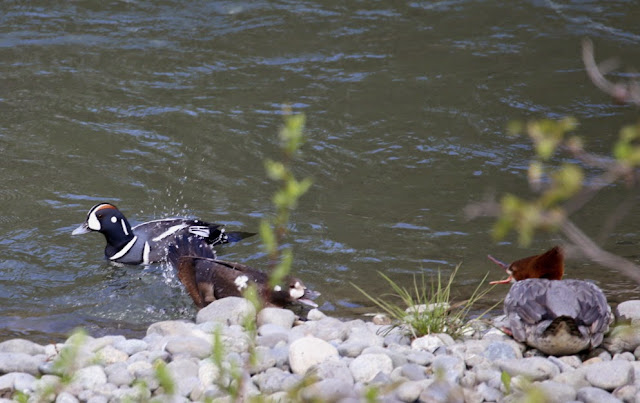 Eventually I noticed the female Harlequin but I did not even notice the female Common Merganser that was squabbling with it. I never noticed the merganser until after the harlequins had drifted off. 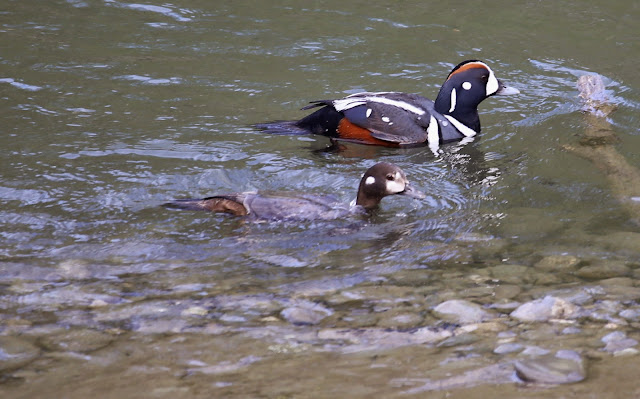 I finally got more unobstructed views but I was still a good distance away. I regretted not having my HS-50 with its more powerful zoom lens. 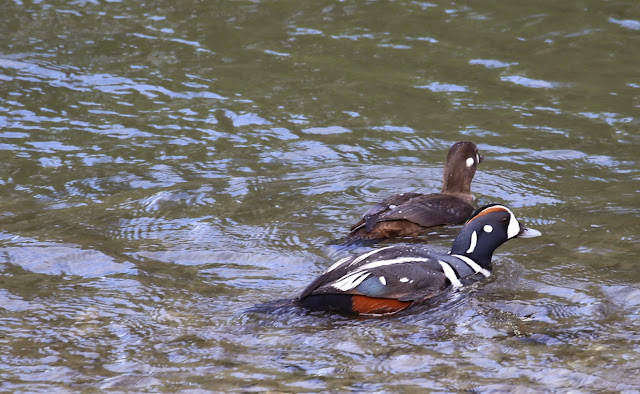 In all I saw 3 pairs of Harlequins although these were the only ones that I photographed. I guess they breed in Ship Creek although I did not know that. What a treasure. 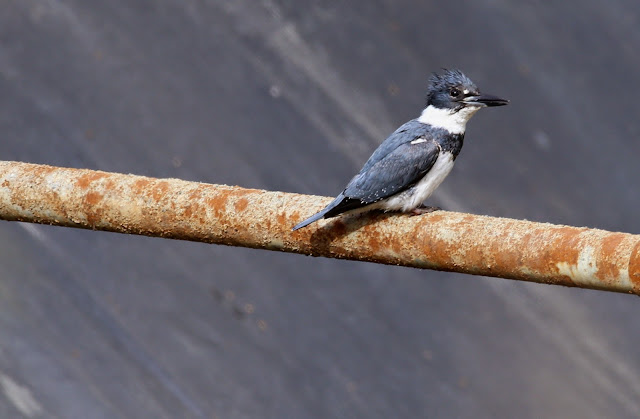 Just downstream from the Harlequins I found this Belted Kingfisher on some industrial debris. 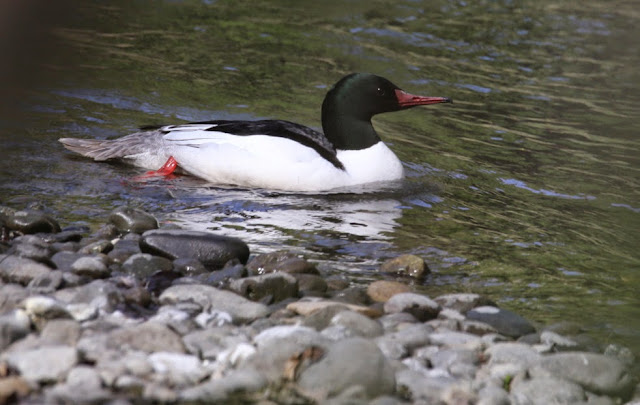 A few miles downstream I got close to this male, Common Merganser. 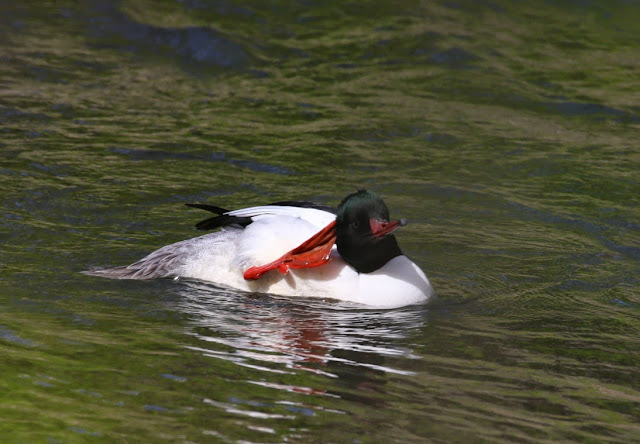 It appears to be enjoying that scratch. What a foot. At this point I was plenty tired of lugging that heavy Sigma lens. 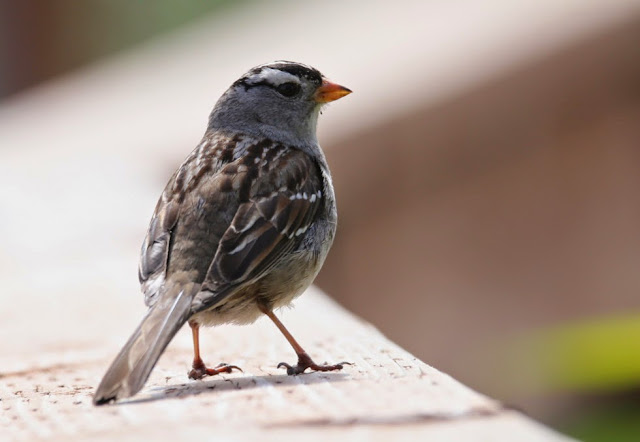 There were lots of White-crowned Sparrows. I also saw plenty of warblers, starlings, redpolls, juncos, Ruby-crowned Kinglets etc. There was a few Spotted Sandpipers, Lesser Yellowlegs, many gulls, other species of ducks including a single, White-fronted Goose at the mouth where Ship Creek enters the ocean. I missed seeing Dippers which nest along the creek. A reason to go back soon I hope. 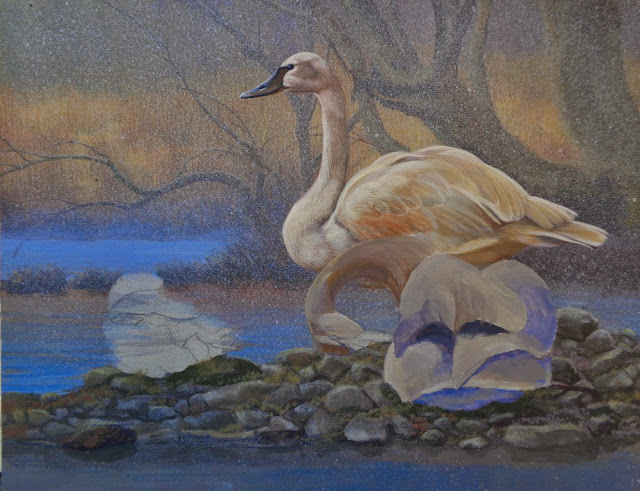 I have made some progress on the swan painting.
Posted by john at 3:07 PM

I'm really enjoying your recent photos (especially the ones of the ducks) and am looking forward to seeing the swan painting completed. Interestingly, we saw a pair of Harlequin ducks a few weeks ago in Washington State when we were visiting - amazing birds and a first for me.

Nice series.....Harlequins are fabulous ducks, it must be a thrill to find them locally .

P.S. Deleted comment was me: couldn't work out how to correct a "typo"...I will now go and seek out coffee.