An Appreciation of Snakes

Before my love for birds, there were snakes.
My family moved to Carpinteria, California when I was between the 4th, and 5th grade. There was a creek about 2 blocks from my new house, and it was a paradise to me. One Spring morning as I was crossing the creek I looked down and saw a long, slender, olive green snake in the water.
Without knowing whether it was poisonous or not, I reached down and picked it up behind the head. Then I looked at it's tail to see if there was a rattle. To my astonishment there was another head, complete with flickering tongue.

Somehow I manged to keep hold of the two-headed snake, and soon I noticed two tails intertwined in the snake's middle. It was two snakes mating. Finding a diamond necklace could not have thrilled me more than those Two-striped Garter Snakes. 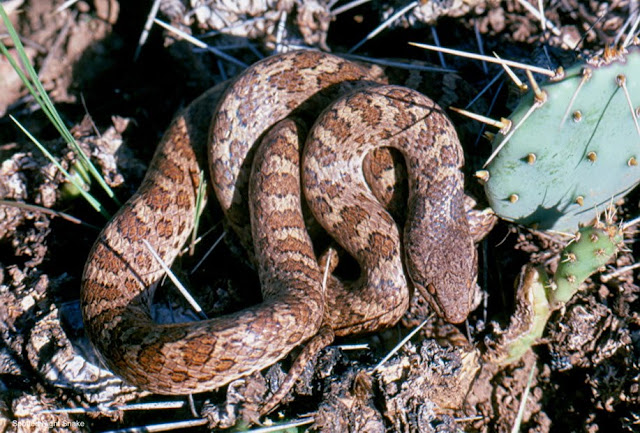 From that moment and all the way through high school I was obsessed with snakes, and I maintained a small menagerie of them. Gradually my interest in snakes grew to include birds and nature in general. I lost the need to keep a bunch of snakes, and grew an appreciation of snakes in their natural state. The above snake is a Spotted Night Snake in Arizona's White Mountains. 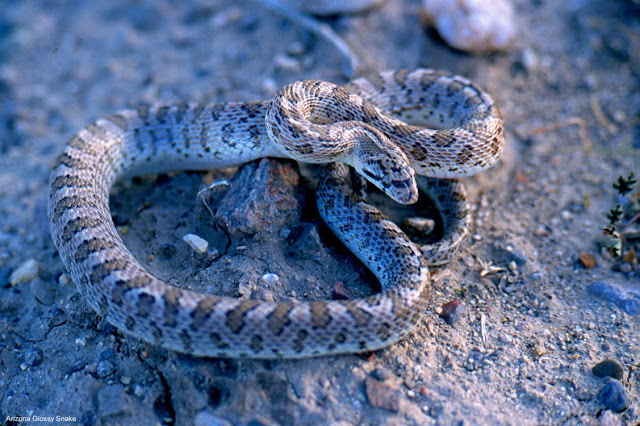 Similar in appearance to the Night Snake, is this Glossy Snake near Safford, AZ. 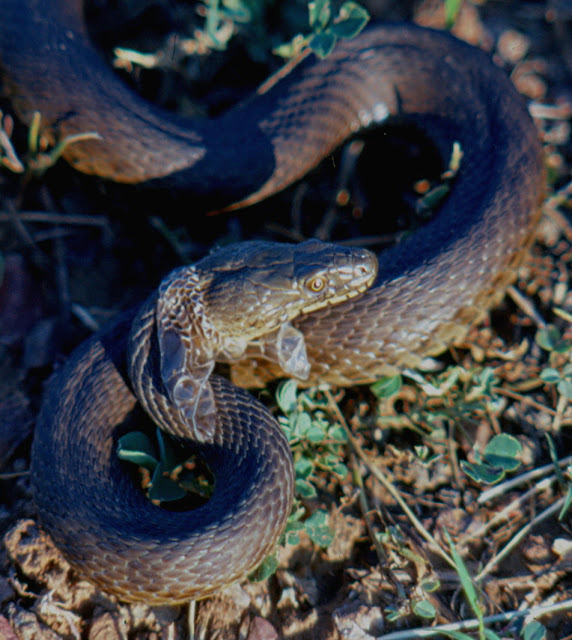 The only species of garter snake without stripes is the Narrow-headed Garter Snake of Western New Mexico, and Eastern AZ. This individual is in the process of shedding it's skin. 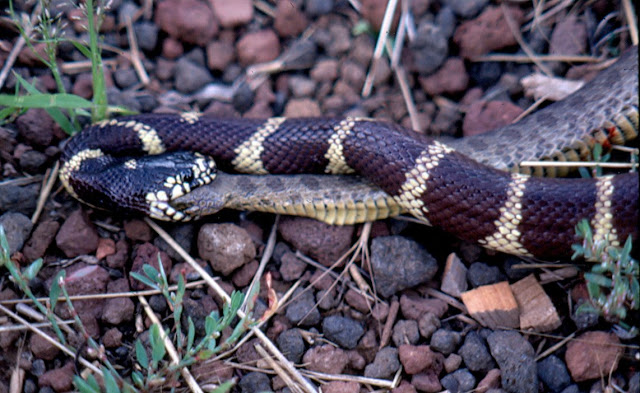 Kingsnakes are known for being cannibalistic. This California Kingsnake is eating a Narrow-headed Garter Snake. 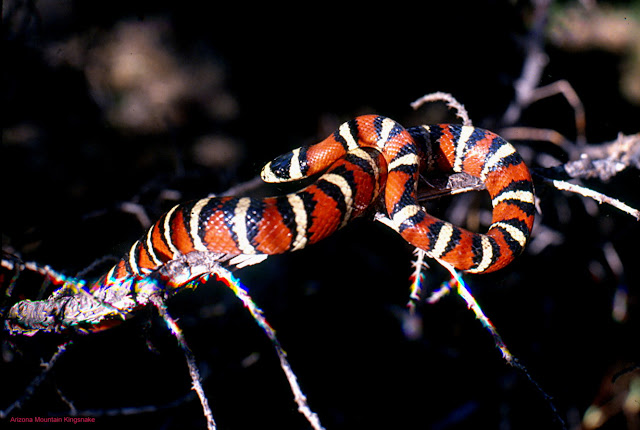 Another species of Kingsnake, the Arizona Mountain Kingsnake. They are one of the coral snake mimics. 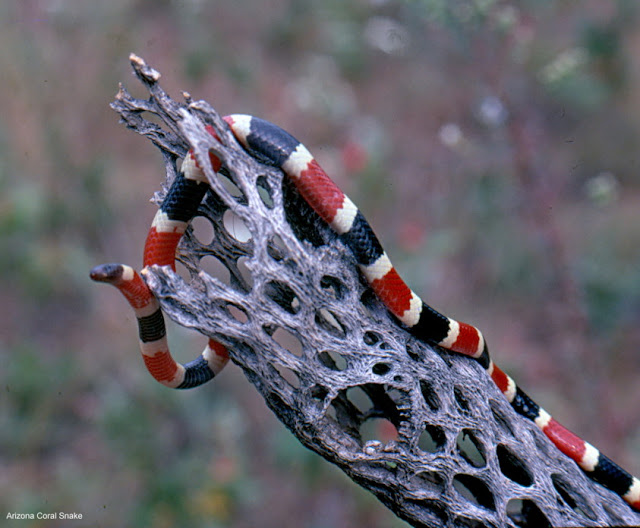 This is the real deal, Arizona Coral Snake. They are also cannibalistic, and deadly poisonous, but they have a meek disposition. 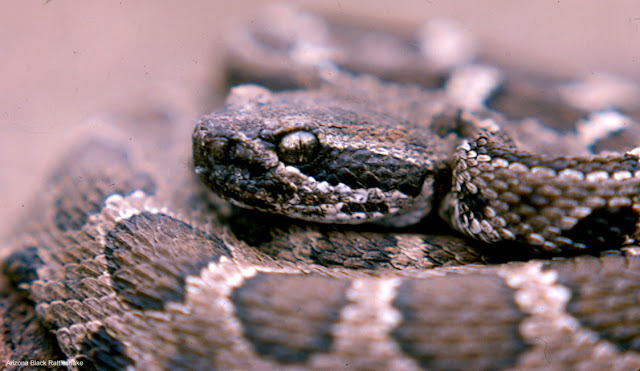 The story of this snake goes like this. When I lived in Arizona, a friend of mine found this baby, Arizona Black Rattlesnake behind the shop where he worked. He scooped it up in a 5 gallon plastic bucket, and called me to ask if I wanted it.
I brought it home to photograph it. It was temporarily housed in a small terrarium. One afternoon I had the lid off, observing the un-moving snake. I was sure it was asleep. The phone rang in the other room and I went to answer it without replacing the lid.
When I returned to the room a few minutes later, the rattlesnake was gone. I put a towel under the door, and started a methodical seach of the bedroom. While I was leaning across my desk and sorting through the paintings behind it, I was absentmindedly scratching an itch in my left armpit. The tickling became persistent enough that I looked to see what was causing it.
There was the little rattlesnake, coiled on the desk, and tickling the hair of my armpit with it's tongue. I jumped back, and took a moment to calm down before retrieving the merciful snake. 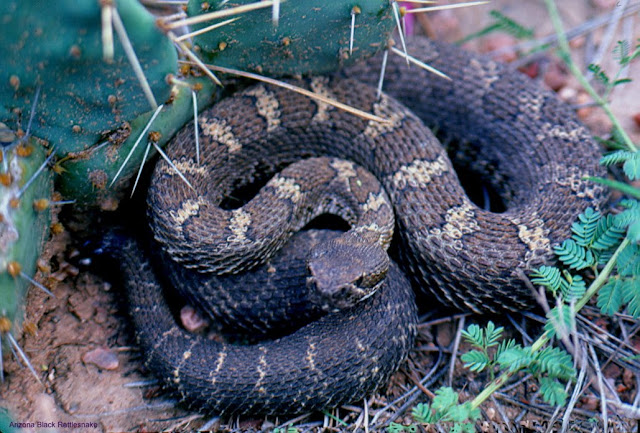 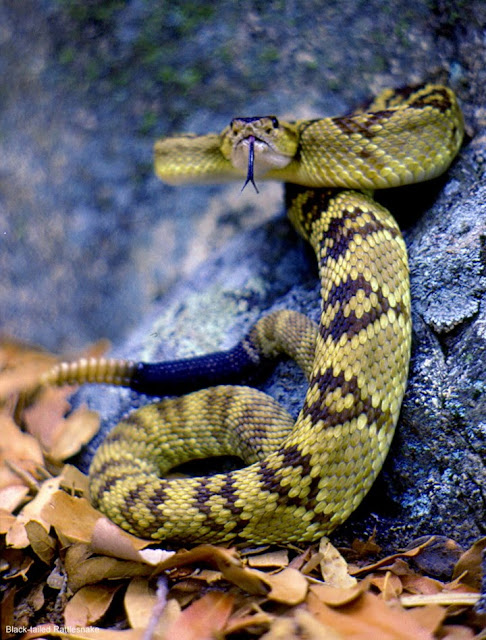 The spectacular, Black-tailed Rattlesnake in the Pinaleno Mountains of Southeastern AZ. 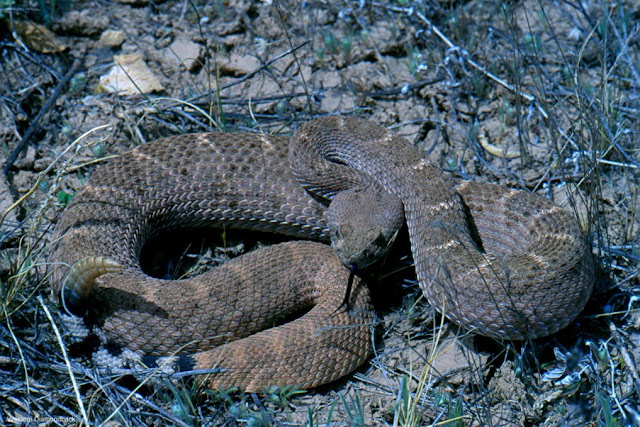 This Western Diamonback near Clifton, AZ.is the most pugnacious rattlesnake I have ever encountered. It struck at everything around it, and even bit itself repeatedly in it's excitment. It eventually calmed down enough for me to get this photo. This snake truly intimidated me. 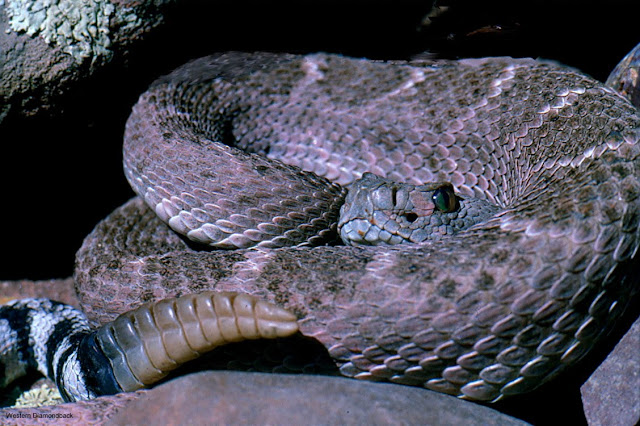 Western Diamondbacks grow large, and are abundant in many parts of the Southwest. Why the love of snakes? I have no answer.
Posted by john at 10:26 PM

I love your snake shots and stories! I can also understand and appreciate your fascination with snakes. Not many people can fathom why I find it a highlight to come across a snake while hiking or whatever. They're just so exotic and beautiful. Of course I don't want to get bit, and I don't want to disturb them, but I sure love seeing (and photographing) them!!