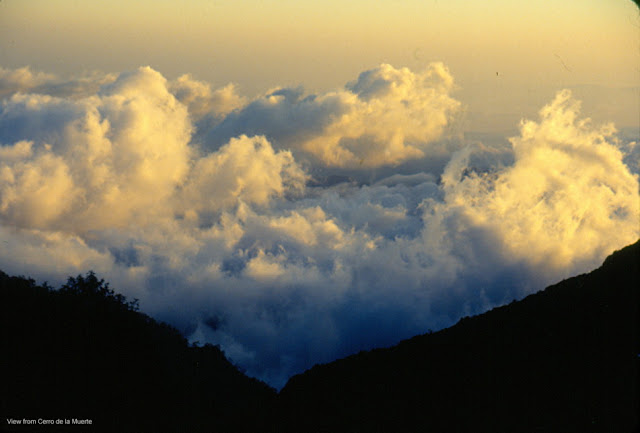 There is a big mountain that separates northern Costa Rica from the southern half of the country. Cerro de la Muerte, is called the Mountain of Death by wimpy Costa Ricans who are hyper sensitive to temperature changes. Many of them dont even own a long sleeved shirt, let alone a coat. Although it never even snows on the slopes of Cerro de la Muerte, it gets cold enough to kill people who are adapted to a tropical climate.

The mountain rises up through cloud forest to Paramo habitat above timberline. Paramo is like a tropical version of tundra. The view above overlooks the Pacific lowlands near Tarcoles and Carara. It is usually cloudy and rainy on the always cool mountain. 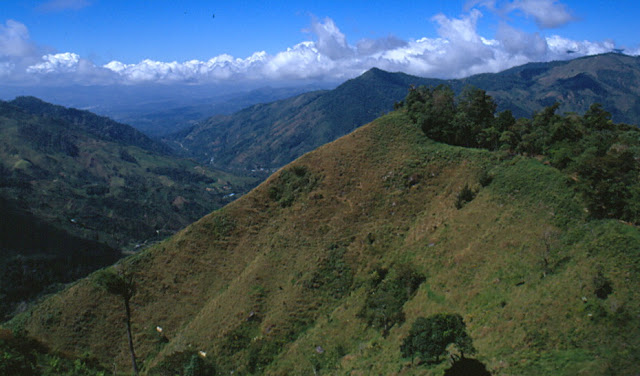 Sadly most of the slopes in Costa Rica have been cleared of their forests in order to create cow pasture. 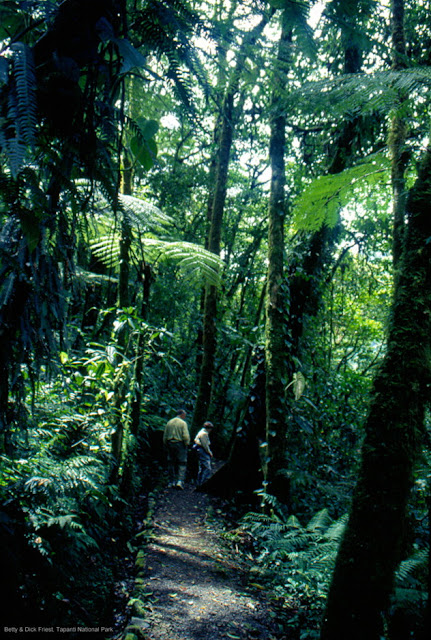 Parts of Cerro de la Muerte are protected. Here are my friends Betty and Dick on the trail in Tapanti National Park. Tapanti is one very wet place. We were fortunate that it did'nt rain much on our visit to the park. It has typical cloud forest habitat. 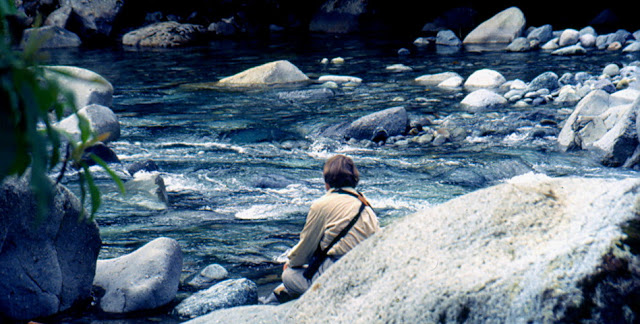 Betty enjoys the scenery beside the Rio Macho in Tapanti. 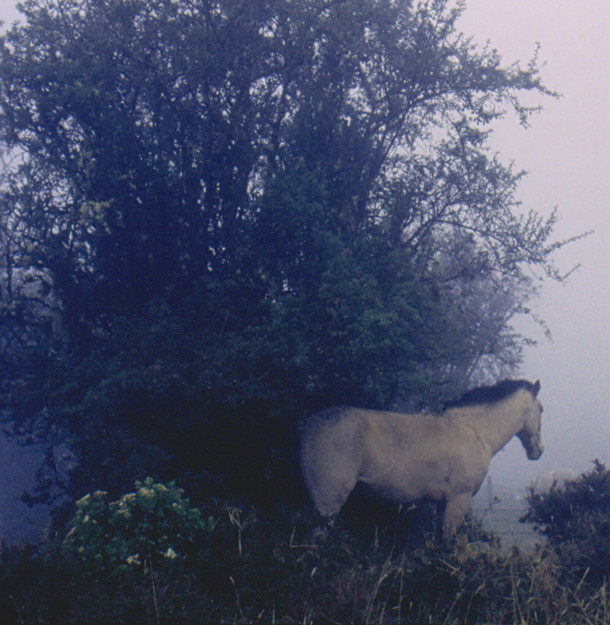 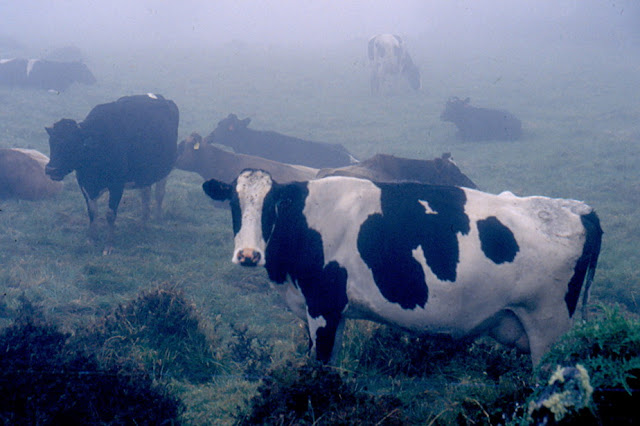 These dairy cows share the horse's sentiment. It's easy to get disoriented in this kind of fog.

Naturally the birds on Cerro de la Muerte are different species than those found in the lowlands. This is the highland thrush called a Sooty Robin. The name may have been changed to Sooty Thrush, I'm not sure. Mountain Robin is a duller version that shares the same habitat. 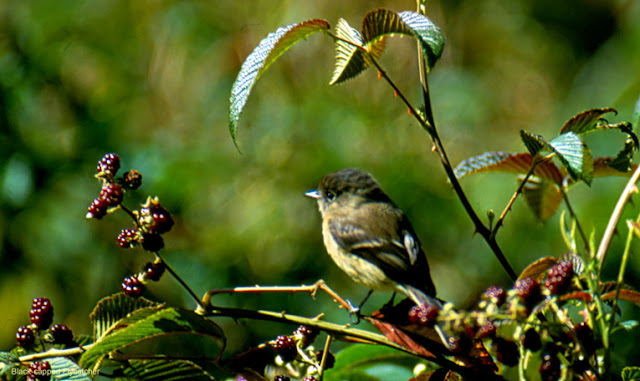 A tiny Black-capped Flycatcher hunts insects from it's vantage on a Rasberry plant. 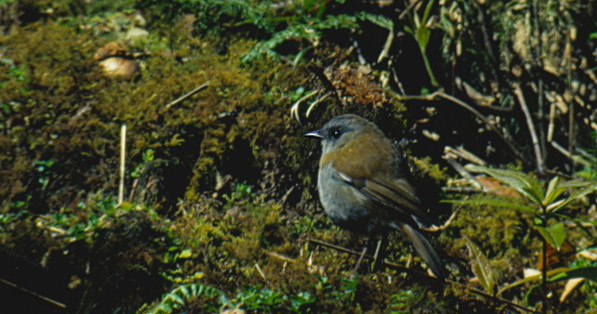 Another characteristic bird of the cloud forest is the Black-billed Nightingale Thrush. It's song is very similar to a Hermit Thrush.

This is another view of a Black-billed Nightingale Thrush. 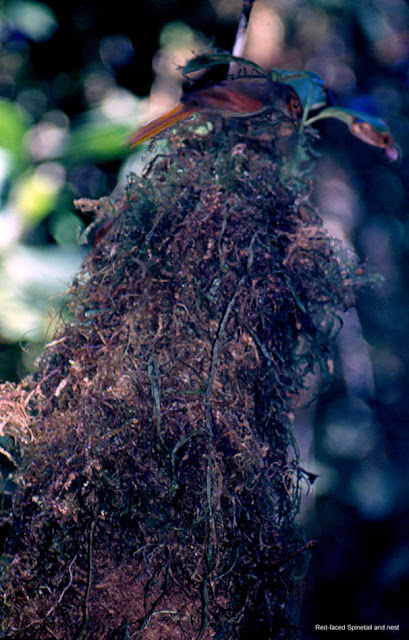 Although it's a terrible photo, I was thrilled to find this Red-faced Spinetail. It was building a huge nest out of living moss right above the trail in Tapanti NP. 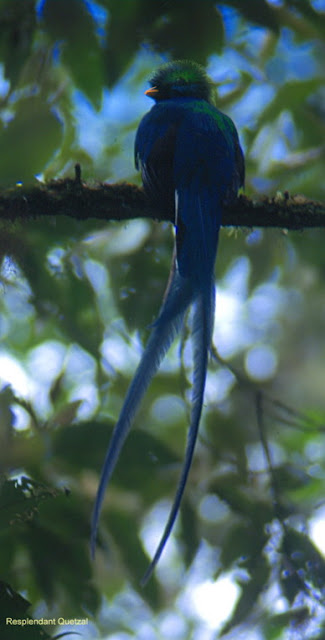 Mirador de los Quetzales, also called Finca Eddie Serrano is the most reliable place I know of the see the Resplendant Quetzal. The quetzal is one of the world's most sought after species by serious birders. It has a bright red breast, but this bird would not let me photograph it from an angle that showed the breast. Quetzals are a relative of the trogons. My list of trogons includes.
Citreoline Trogon
Northern Violaceous Trogon
Amazonan Violaceous Trogon
Black-headed Trogon
Black-throated Trogon
Amazon White-tailed Trogon
Elegant Trogon
Slaty-tailed Trogon
Black-tailed Trogon
Masked Trogon
Baird's Trogon
Blue-crowned Trogon
Narina Trogon
and I heard the Orange-bellied Trogon calling but could not spot it.
Posted by john at 4:43 PM

thanks for sharing your wonderful photos John! I enjoy reading your interesting captions as well...almost as if I'm there with you! Take care and enjoy the rest of your trip...I'm so envious!!!

Thank you for your comment Colette. Just to clarify things. These Costa Rica reports are from past trips. I have not been to Costa Rica since 2001. I just put up these travel posts because nothing much is happening around home these days.

OOPs, my apologies John...I was sure you were spending part of the winter there! I see you have plenty of inspiration with all those photos to keep you going for a while!