Here in Alaska, and in most of the United States, there is only one species of Kingfisher. The Belted Kingfisher is fairly large and impressive though not particularly colorful. Near the Mexican Border and to points south, there are two other species of Kingfisher, the small, Green Kingfisher, and the massive Ringed Kingfisher. Still further south there are 3 more kingfishers, American Pygmy Kingfisher, Green and Rufous Kingfisher, and Amazon Kingfisher. All of them look similar to Green Kingfishers. I have seen them all except for the Green and Rufous Kingfisher.
During my recent trip to South Africa, I was impressed by the 6 species of kingsfisher I saw there. Woodland, Brown-headed, Mangrove, Pied, Giant, and the brilliant Malachite Kingsfisher. There are many other species in Africa, and most are very colorful.

Asia is the place that really has some spectacular kingfishers. Too many to mention. One of the kinds of Kingfisher that I really hope to see one day is the Kookabura of Australia. 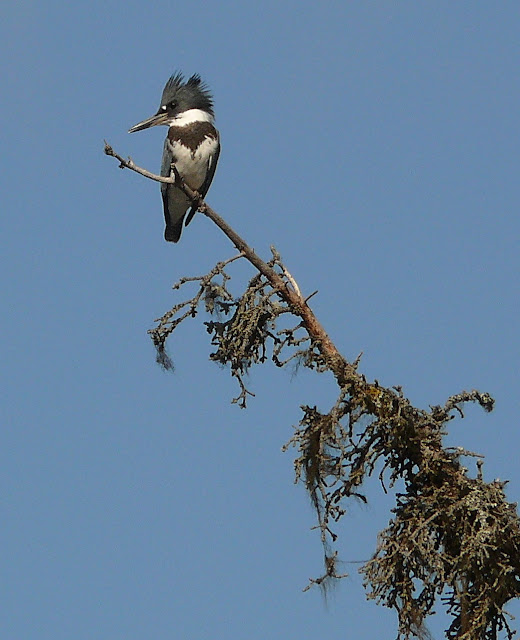 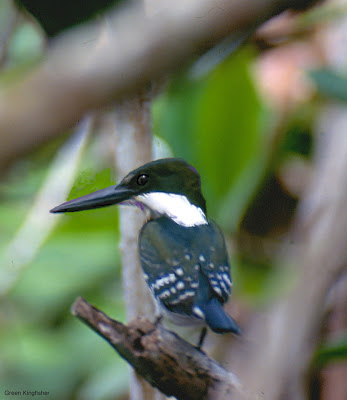 This is a Green Kingfisher that I photographed in San Blas, Mexico. The photo was originally a slide that was scanned into my computer. That's why it looks a little odd. 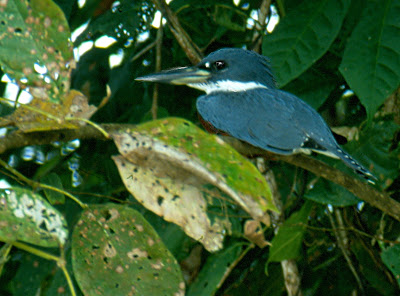 Another bad slide, this is the only photo I have of the biggest Kingfisher in the Americas, The Ringed Kingfisher. Somewhere I have a bad photo of the smallest kingfisher, American Pygmy Kingfisher, but I can't find it. 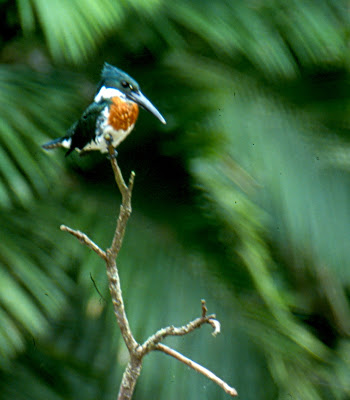 Like the last photo, this Amazon Kingfisher was photographed at Cano Negro, in Costa Rica. 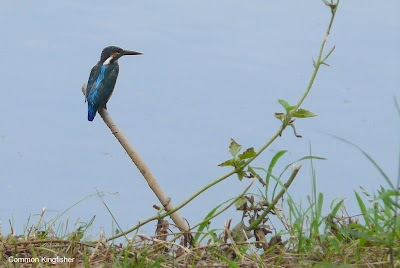 Europe, like most of North America, has only one species of kingfisher, the Common Kingfisher. It is small like the Green Kingfisher, but much more colorful. This photo does'nt do the bird justice. It was photographed in Phang Nga, Thailand. 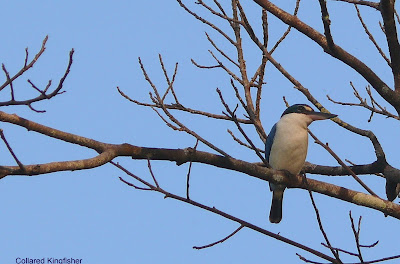 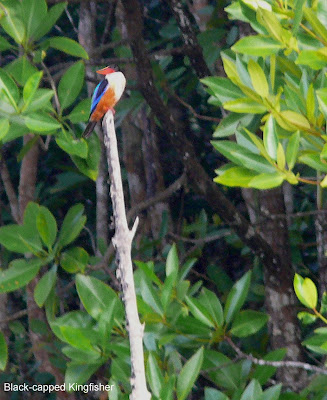 Here is a bad photo of a magnificent bird. Black-capped Kingfiher. 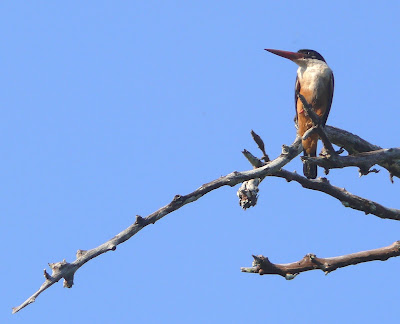 Another Black-capped Kingfisher in Krabi. 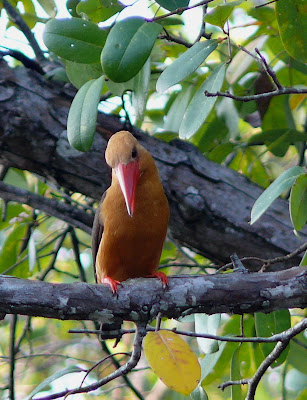 One of the largest Asian Kingfishers is the wonderful, Brown-winged Kingfisher. This one was also in the Mangrove Swamps in Krabi. I also got a few bad photos of White-throated Kingfishers, which are also very colorful, but I can't find them. 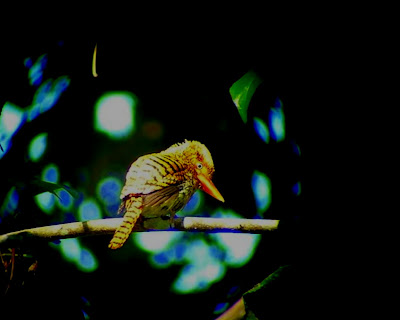 This is a digiscoped image that my friend Gary shot of a female Banded Kingfisher in Khao Yai N.P. Thailand. 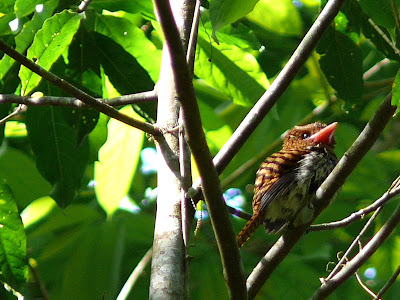 This is my photo of the same bird. Banded Kingfishers are like Kookaburas, and the next species, in that they don't fish. They live in the forest, and eat small creatures, mostly insects. The male of this species is beyond description, but would not sit for a portrait. 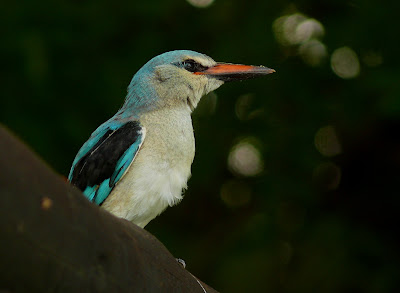 There are a half dozen African kingfishers that look similar to this Woodland Kingfisher in Kruger N.P. If you look closely, you can see that this bird has been raiding spider webs. It has spider webs all over it's body. 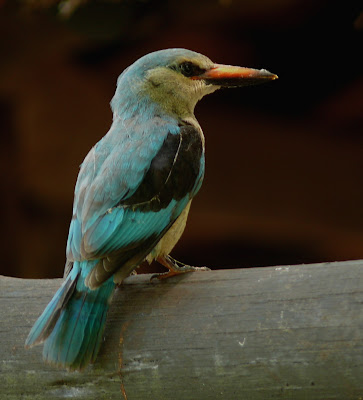 Another view of a very cooperative bird. 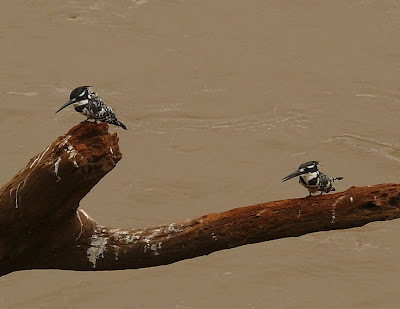 At the far north of Ndumo Park in South Africa, this river seperates South Africa from Mozambique. These Pied Kingfishers were on the South Africa side. There was another pair on the Mozambique side. 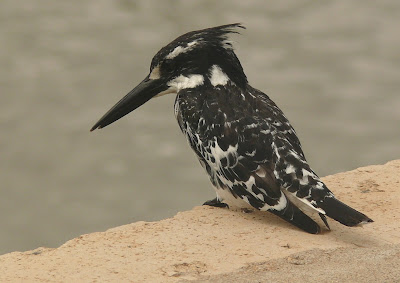 Another Pied Kingfisher on a bridge in Kruger. 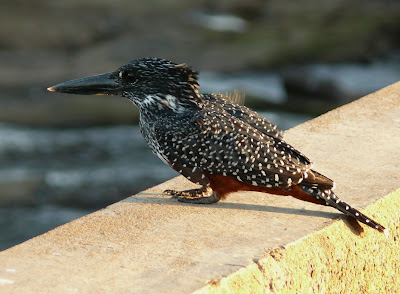 This Giant Kingfisher was on the same bridge. You can compare the size difference between the two species by looking at the width of the concrete rail in relation to the two birds. 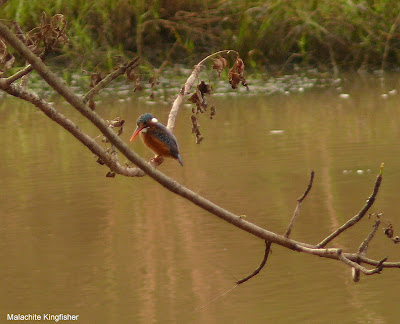 One of the smallest African Kingfishers is probably the world's prettiest, the Malachite Kingfisher. This photo is terrible, but it's the best I could get.
Posted by john at 8:14 PM