The thing that really impressed me about Johannesburg was the diversity of birds sharing space with people. It was a great introduction to the biodiversity of the country. There were two highlights that stand out in my mind. First was a tiny aquatic bird refuge in a nieghborhood near my lodging. It was bursting with birdlife. The second was a termite swarm that we stumbled across. It brought in hundreds of birds intent on feasting as fast as possible on the juicy insects.
My travelling companion for the month long journey was an experienced biologist, and mountain climber named Tom Choate. He is in remarkably good health for a 75 year old. We rented a car and explored the northern, and eastern regions of South Africa. 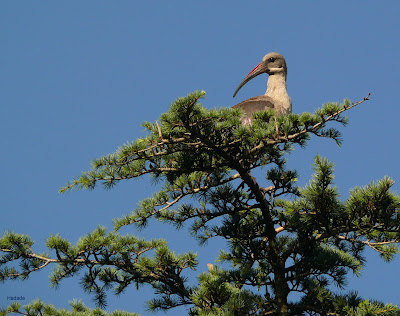 Hadada. This bird is a good representative of the birdlife throughout the country. It is abundant everywhere we visited, and it's loud call is usually the first birdcall heard at dawn, and dusk. 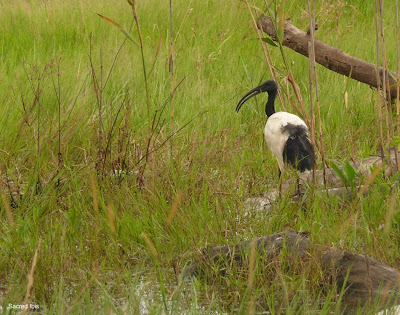 Another species of ibis. The Sacred Ibis is far less abundant than the Hadada, but it was common in the little refuge near us. 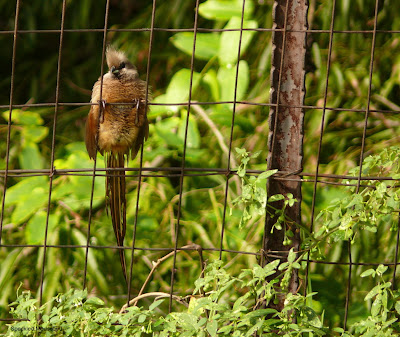 This Speckled Mousebird suns itself on the fence surrounding the bird refuge. Mousebirds never seem to perch upright. They always hang , often with their legs splayed to their sides. They are such delightful birds, with loads of personality. 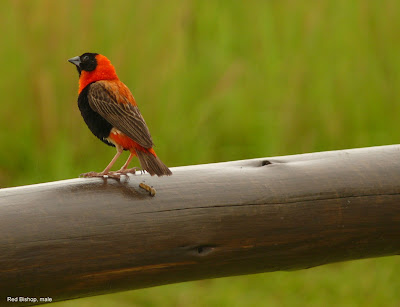 I painted one of these in anticipation of the trip. This Red Bishop was one of the first birds on the scene as termites emerged from the ground, and took to the wing. This Bishop was soon joined by about 10 more Bishops. 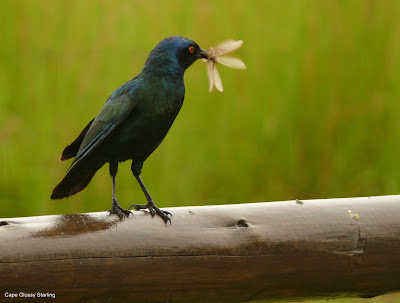 Sharing the same fence rail as the Bishop, was a Cape Glossy Starling with it's prize. 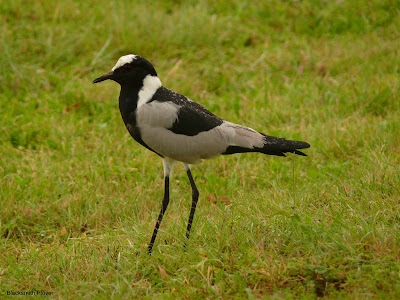 Blacksmith Plovers are another prototypical African species. They relish termites as well as other birds. 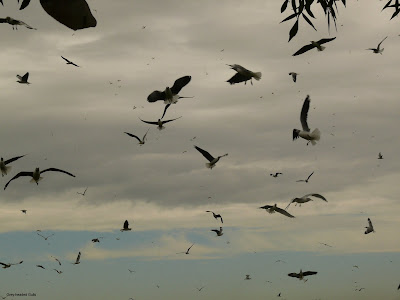 There were Gray-headed Gulls at a nearby lake. When they discovered the termite swarm, they arrived en masse. They cleaned up the entire swarm in minutes. Other species that joined the feast before the gulls were, Cape Sparrows, Common Mynas, Fiscal Shrike, African Masked Weavers, and several species of swallow. 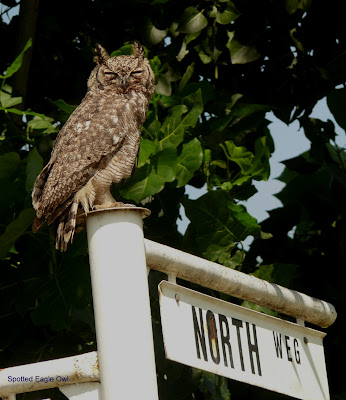 Finally, on the way out of town we noticed what looked like a fake owl on the signpost at the corner. When we backed up to take a second look, we could'nt believe it was a Spotted Eagle Owl roosting right out in the open. There were many large trees in the area that would have been more suitable perches. The Spotted Eagle Owl seems to occupy the same niche as North America's Great-horned Owl.
Posted by john at 9:49 PM

Wow these are great, I love the owl shot.