When I returned to Iquitos after the Cumaceiba River I went to another local travel agency. There I booked another stay at a lodge on the banks of the mighty Amazon. It just happened to be called Cumaceiba Lodge although it had no connection to the first place. Cumaceiba is the name of a rainforest tree.

This lodge was surrounded by it's own small nature preserve. It was much nicer than the first place, and less expensive. I was escorted to the lodge, along with a friendly Canadian couple in a nicer, faster boat. When the lodge staff learned that I was an experienced birder, and had the new bird guide, they had the same reaction as the people at the first place. They assigned their most experienced guide to be my personal guide, and he pushed me all he could to get me to as many habitats as possible. There was enough dry land that I did'nt have to spend all my time in leaky wooden boats.

There was a colony of Hoatzins nesting not more than 50 ft from my comfortable bungalow. We all ate our meals in a communal dining room to the accompanement of live music. A large Pink-toed Tarantula fell from the thatched roof and landed next to the Canadian couple. I released it outside, and went back to eating. We also shared our meals with a tame Capybara, and several parrots.

A pair of Pied Puffbirds. 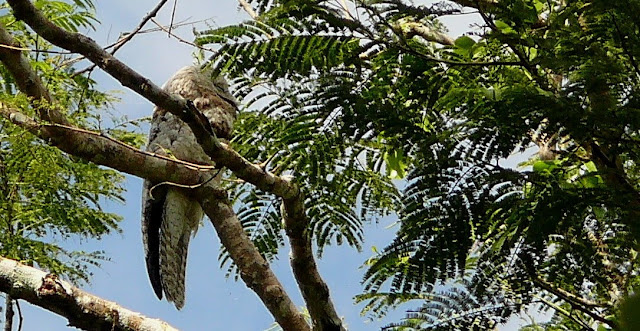 A Great Potoo is the size of a Great-horned Owl, but is related to nighthawks and whip-poor-wills.

There were many Black-fronted Nunbirds. 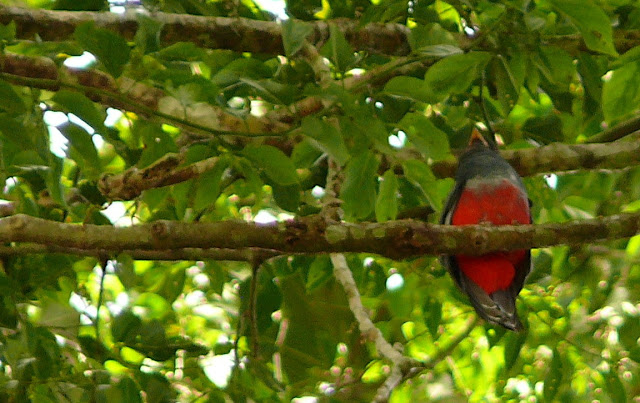 A bad photo of a great bird, Blue-crowned Trogon. There were many Black-tailed, and Violaceous Trogons in the area as well. 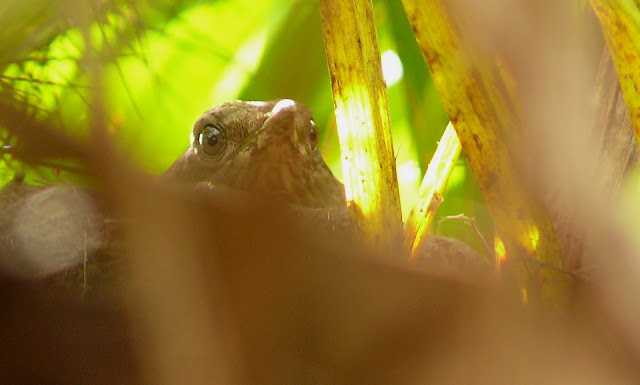 This Black-billed Thrush sits on it's nest right near the Hoatzins.

Tropical Kingbirds are probably the most common bird of the Neotropics. 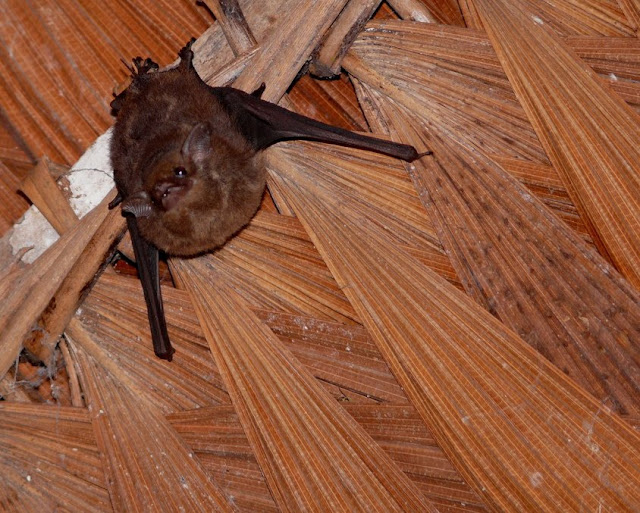 There was no shortage of bats here either. This one roosts under a covered walkway. 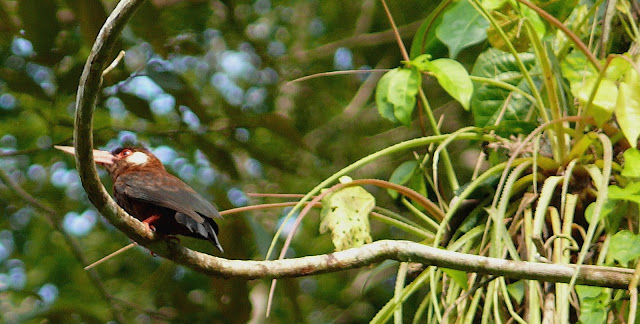 The White-eared Jacamars were delightful to observe. 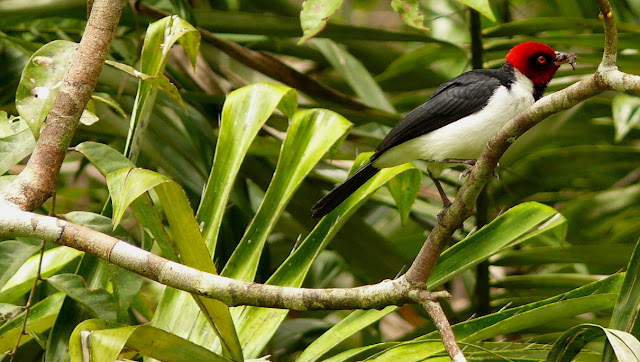 Nesting right alongside the Hoatzins and thrush, were Wattled Jacanas and a pair of Red-crested Cardinals. 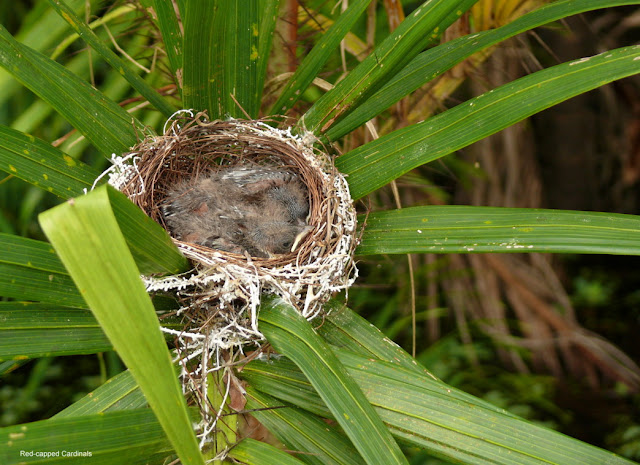 The baby cardinals asleep in the nest. 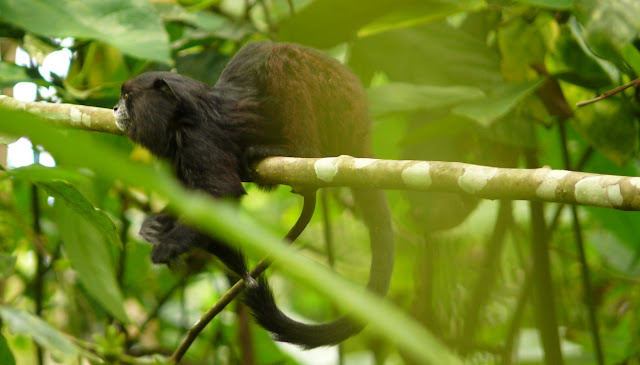 I believe this small primate is called a White-bearded Tamarin. 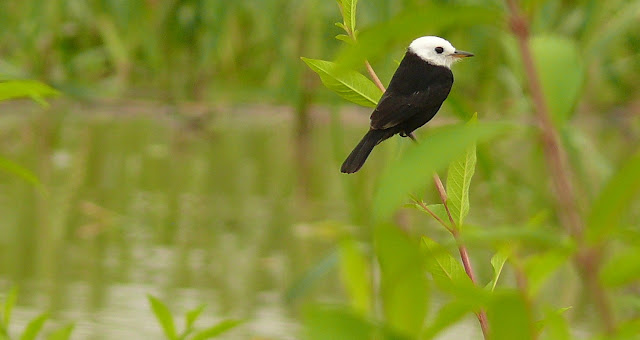 One of the habitats we explored was a large island across from the lodge in the middle of the Amazon River. A specialty of that habitat is the White-headed Marsh Tyrant. 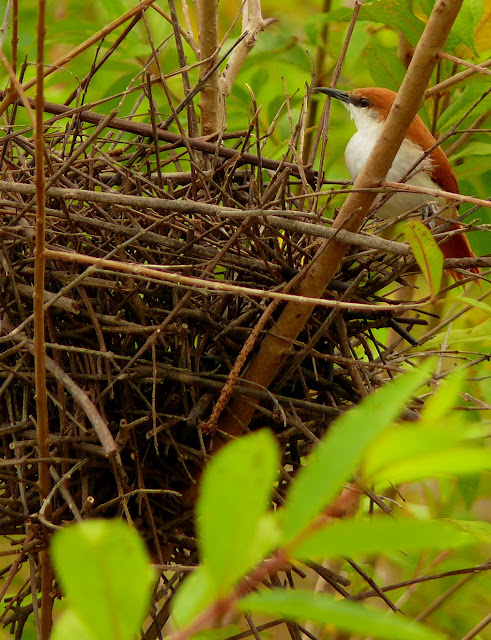 Red and White Spinetails occur exclusively on islands in the Amazon River. This nest was in flooded vegetation only inches above the water.
Posted by john at 9:07 PM