When I first moved to Alaska in 1997, I heard people talking about Kings, Reds, Silvers, Pinks, Chums. Cohos, Humpies etc. They were talking about species of Salmon and it was all gibberish to me. I hate fish and fishing just bores me after a few minutes.
My nephew Sterling brought me to a small stream next to his property. It was about 3 ft across and 1 ft deep. It was full of huge 4 ft long salmon. We could have scooped them out with a pitchfork. They were the prized King Salmon, also called Chinooks. They were completely fascinating to me as I watched them migrate up that small stream. Chinooks are the first salmon species to enter fresh water to spawn in early summer. 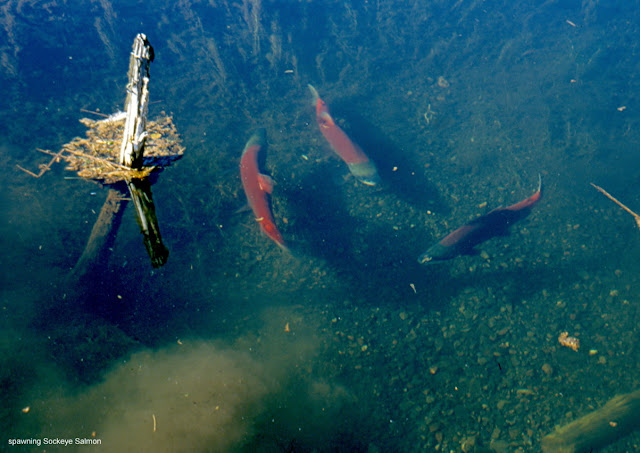 These are Sockeye Salmon, better known as Reds. They are the second species to enter fresh water. They are displaying and fighting for females on their spawning grounds above Eagle River. They are delicious eating, (not according to me), while they are still silver in color. By the time they turn red, their flesh is not so palatable. 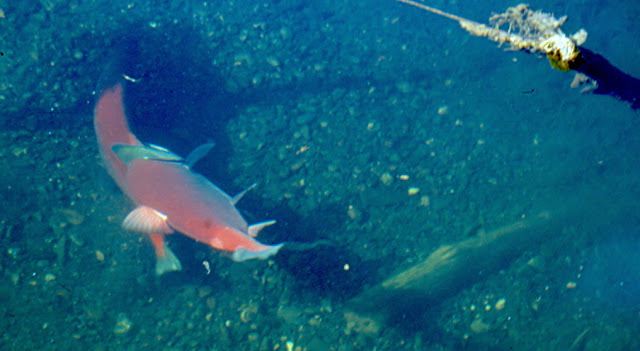 Here a male bites the back of another male in an attempt to drive it off the spawning ground. 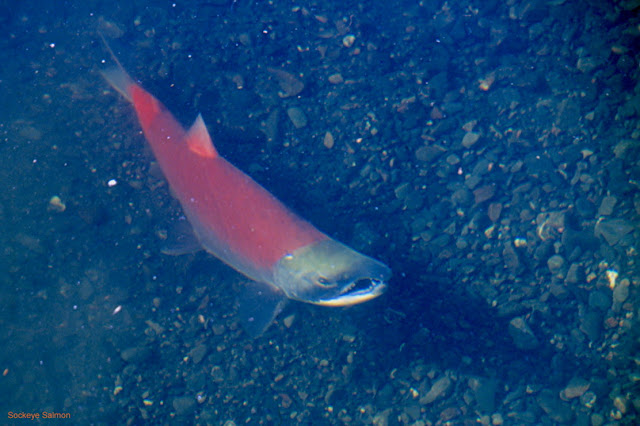 The male salmon developes a hooked jaw with formidable teeth when it leaves salt water and enters it's particular spawning stream. These weapons are used only against other males. 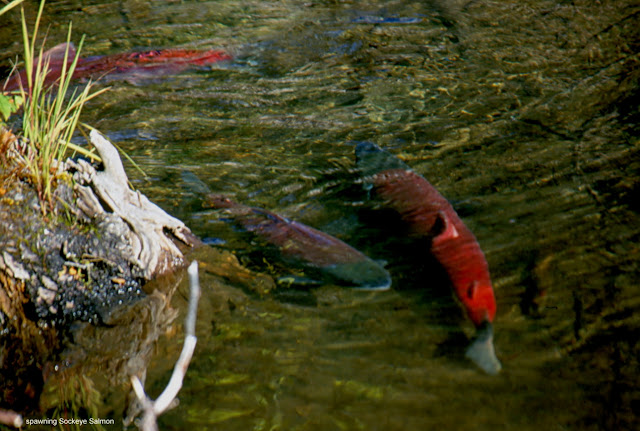 Sockeye Salmon spawning right at my feet in shallow water. 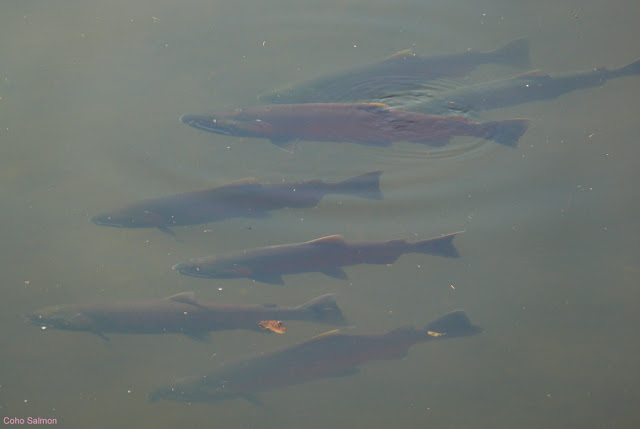 Right now is the time for Silvers. Also known as Coho Salmon, they are also considered excellent eating. They also turn deep red while spawning. On a canoe trip with my nephew Danny, we canoed the Swanson River on the Kenai Penninsula. The Silver Salmon were so densely packed in places that they sounded like distant thunder as they swam under the canoe. Individual salmon would hit our paddles so hard that it was hard to keep hold of them. Bears were eating them and only eating the brains because of the bounty of easy food. Eagles, gulls, magpies, and Gray Jays ate as much as they could manage of the remains. 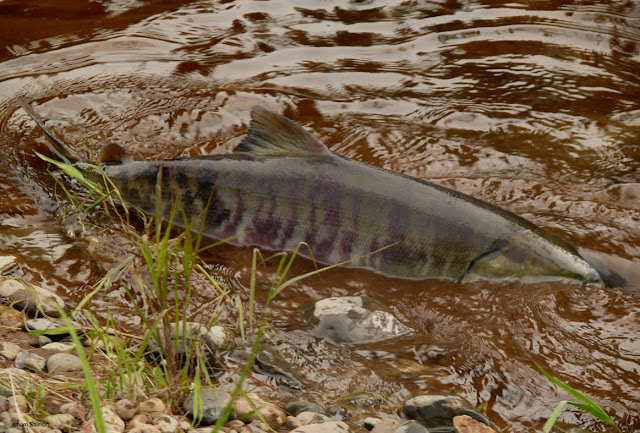 Now is also the time that Chum Salmon migrate upstream. They are distinguished by the striping on their sides. They are also called Dog Salmon because, according to locals, they are only fit to be fed to the dogs. Most canned salmon is this abundant species. 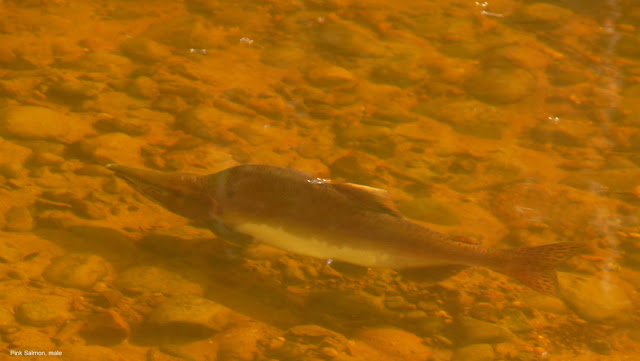 Another species that spawns at this time of year is the Humpbacked, or Pink Salmon. It is the smallest species, and also considered to be of lesser quality for eating. This is the hook-jawed male. 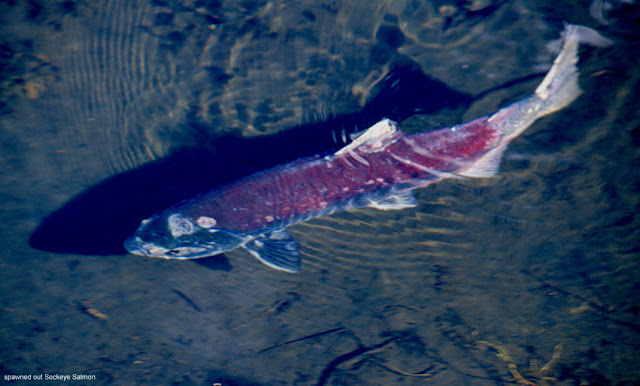 Very soon after spawning, salmon begin to deteriorate. It is a revolting spectacle. I feel so bad for these fish. Nature can be so heartless sometimes.

In a short time they go the way of all the earth. 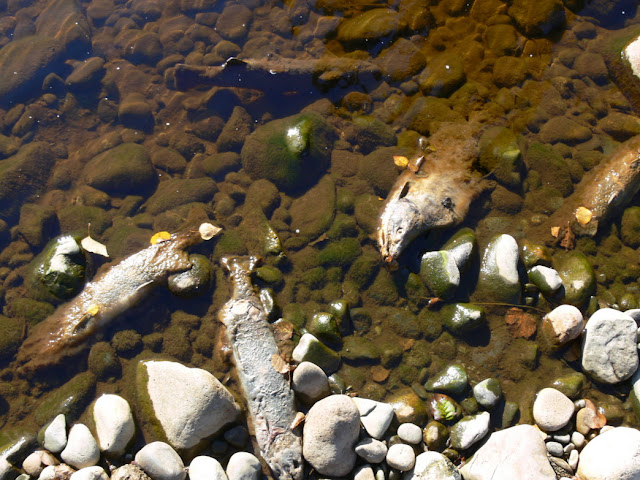 The local rivers and streams just reek with the stench of so many rotting fish. Meanwhile the next generation wriggles in the gravel at the bottom of the streams.
So let's review,
King=Chinook
Red=Sockeye
Silver=Coho
Pink=Humpback
Dog=Chum.
Posted by john at 12:02 AM

Fascinating post, thanks for showing that.
The remark about the Chum salmon made me smile.