A Celebration of Sunbirds, part 1 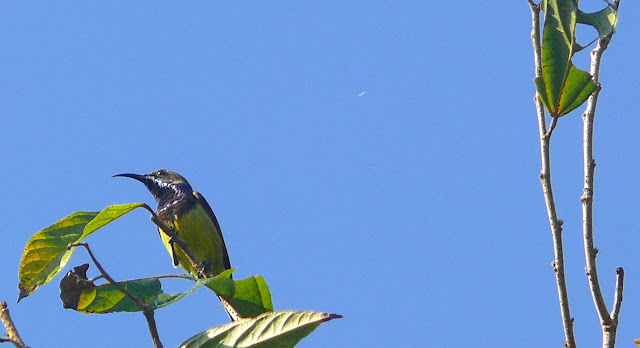 Sunbirds are a large family of nectar-sipping birds that occur in South Asia, Indonesia, Africa, and parts of the Middle East. I'm not sure if they range all the way to New Guinea or Australia. My Guide to the Birds of Southeast Asia shows 17 species of sunbird occuring there. 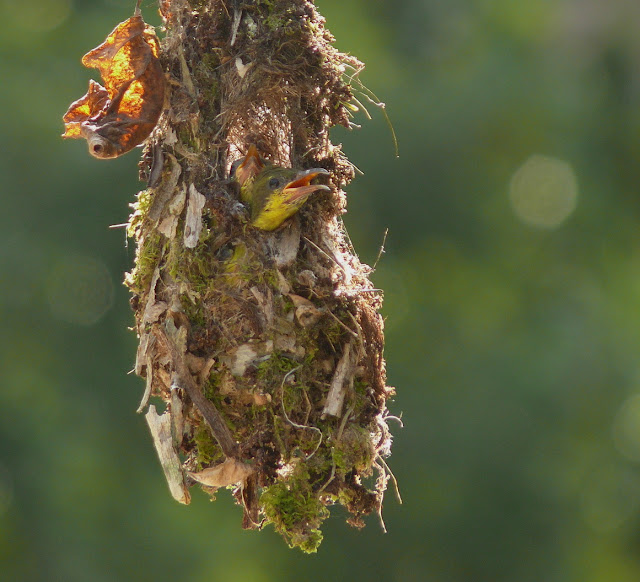 Sunbirds are small with metallic plummage. They look and act like the hummingbirds of the Western Hemisphere. However, they do not hover and their nesting behavior is completely different. Sunbirds build hanging nests like the Olive-backed Sunbird nest above. Both males and females feed the nestlings.
Himmingbirds by contrast, build tiny, cup nests and the male takes no part in building the nest, incubating the eggs, or feeding the young. 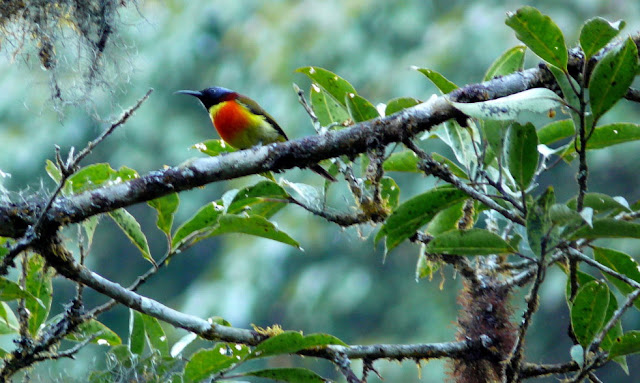 This spectacular male, Green-tailed Sunbird was on top of the highest mountain in Thailand, Doi Inthanon. The only other Southeast Asian Sunbird species I have seen is the Ruby-cheeked Sunbird, and the even more spectacular Crimson Sunbird. I have seen several other species which I could not identify. 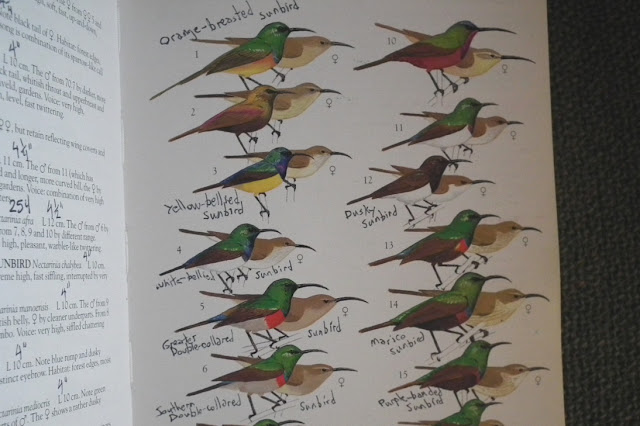 My Field Guide to the Birds of Southern Africa lists 41 species of sunbird. Many of them are very difficult to distinguish one from another. 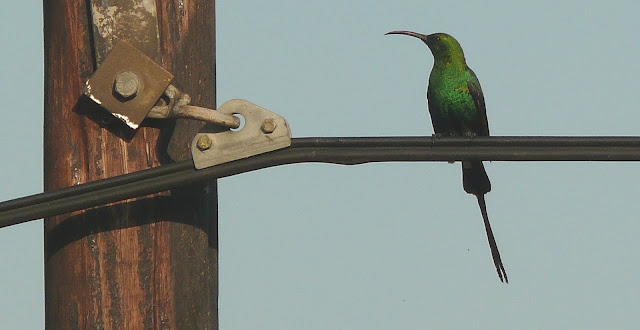 The first sunbird I saw in Africa was this glittery, male Malachite Sunbird near Johannesburg, South Africa. It is one of the largest sunbird species. 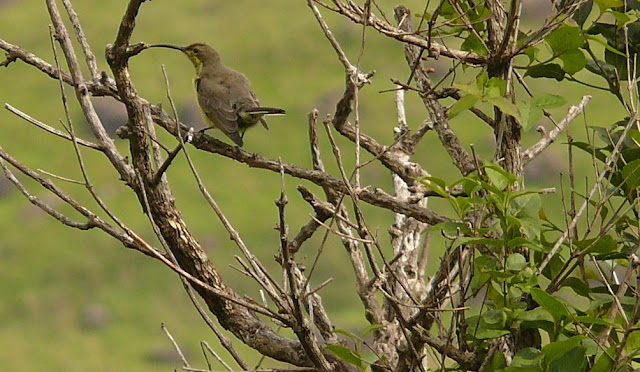 Female sunbirds are especially difficult to identify. They are drab by comparison to the males. One has to pay attention to habitat, behavior, subtle plummage markings and body proportions. This individual was in the Drakensburg Mountains of South Africa. It is probably a female Malachite Sunbird. 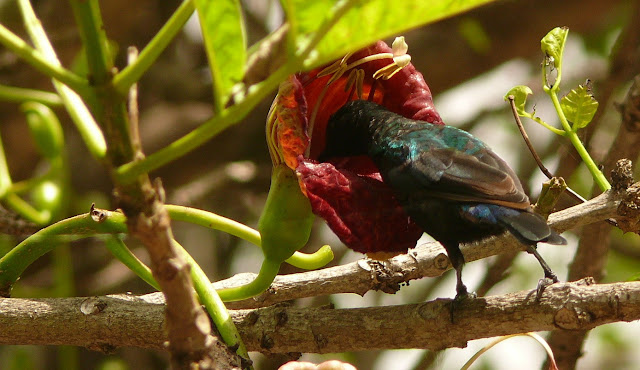 A male Amethyst Sunbird buries it's head in a blossom in Kruger NP. 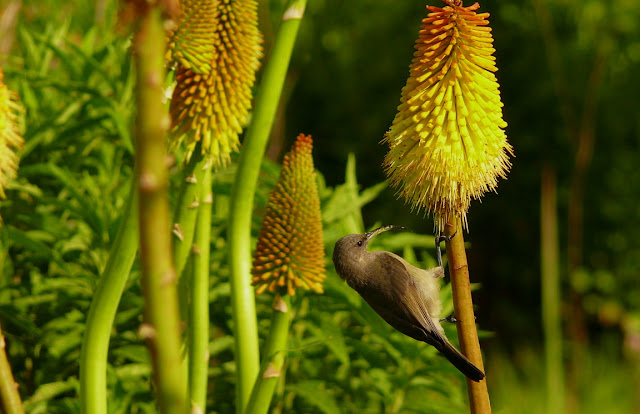 This was a female sunbird I identified by observing which males it associated with. That's how I figured out that this was a Greater Double-collared Sunbird. She was in the gardens of a lodge at the base of the Drakensburg Mountains. 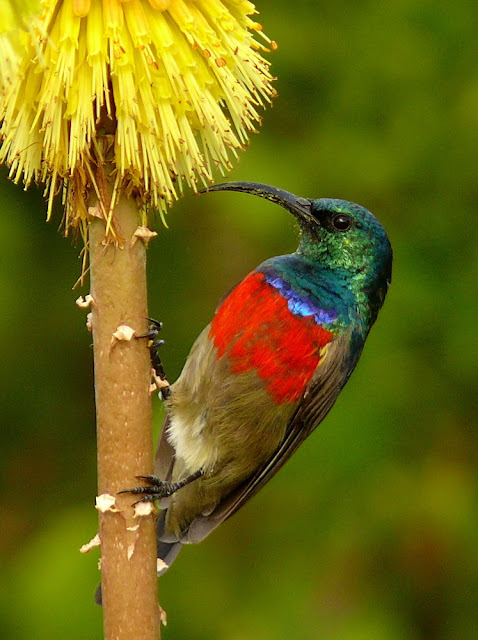 The male Greater Double-collared Sunbirds were fearless of me, and allowed me to approach closely. 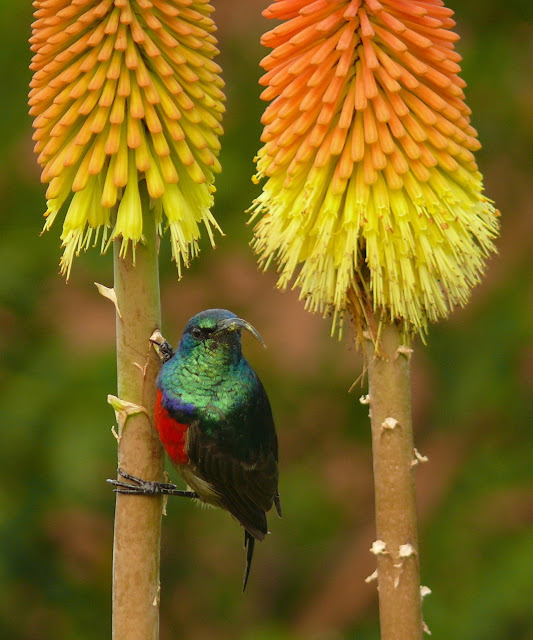 The late afternoon light was nearly perfect. The Red Hot Pokers were in full bloom. There were several GDC Sunbirds along with a few Amethyst Sunbirds visiting the flowers. Only the GDC Sunbirds cooperated for photos, but I could not have asked for better photographic circumstances.
Other sunbirds I saw in South Africa were, Collared Sunbird, and Purple-banded Sunbird. There were more that I could not identify.
Posted by john at 9:02 PM

I think one of these hanging nests is in our yard. It is undisturbed, however a Micking Bird nest seemed to be in distress for many nights, with the couple squawking all day, & night.

Unable to paste a photo, without some weird Twitter link interrupting my photo gallery...(?)