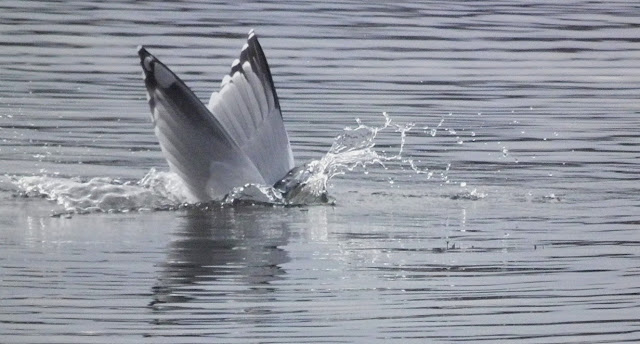 A local birder reported seeing a Long-tailed Duck, some White-winged, and Surf Scoters on Lake Hood, here in Anchorage. I dont have photos of any of those species, so my friend Dan and I went to check them out.
We waited about a week before getting around to going, so we missed them. While we were out and about, we headed over to Spenard Crossing to see if there was anything to photograph over there. We spotted this gull diving underwater. Who knew that gulls ever dive underwater? Care to guess what species it is based on it's wing pattern alone? You are a master birder if you can identify it. 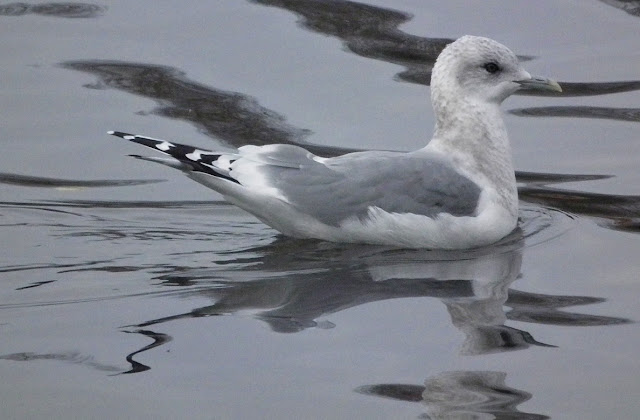 This aint it. This is a winter, Mew Gull that was hovering nearby. 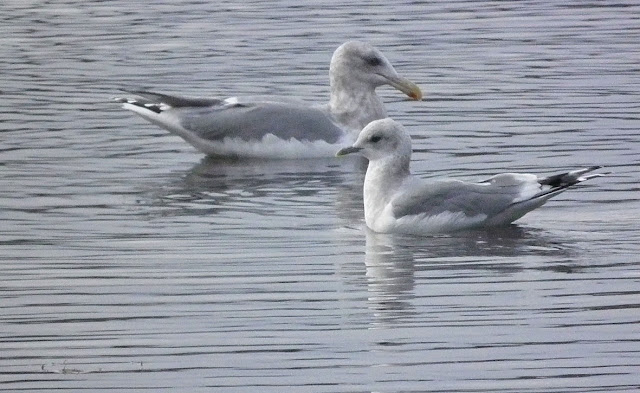 This is the Mew Gull, in front of the diving gull. Any guesses yet? It's an easy one now that you can see it's head. 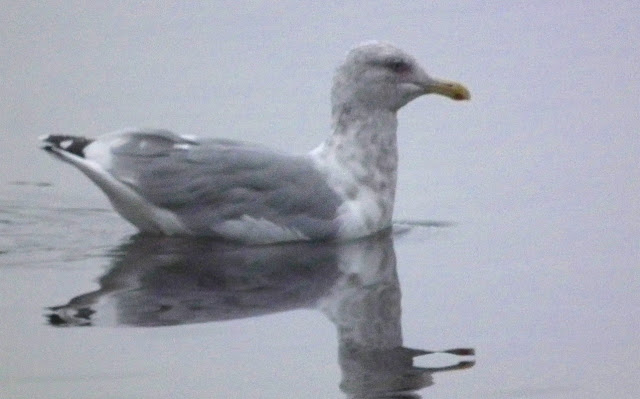 Compare this gull to the top gull in the last photo. Notice the difference in head, and bill shapes? This gull is the one I shot a few weeks ago that I thought might be a Thayers Gull. Now I'm certain that it is. A new bird for me. Any guesses on the identity of the diving gull? 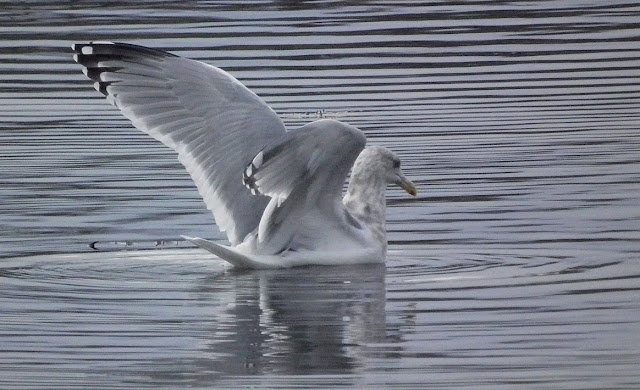 It's really no mystery. It is one of the most widespread, and common gulls in the world. It is made up of many sub-species, related species, and geographical races. It's just a common ol' Herring Gull. There is a reason why it was trying to dive underwater... 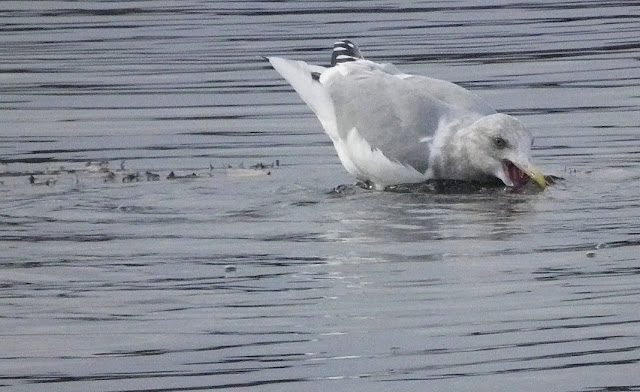 There was a large, rotting salmon just underwater. It was too big for the gull to pull up. So the gull was trying to tear off bite-sized chunks. Yuck! 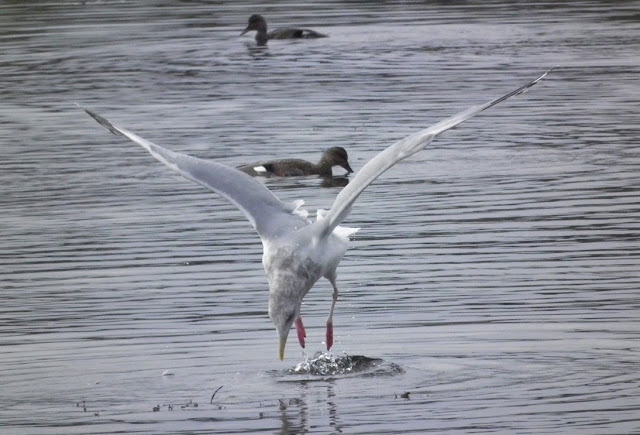 It would hop up, and dive most of the way underwater to reach the big fish.  Those are Gadwalls in the background. 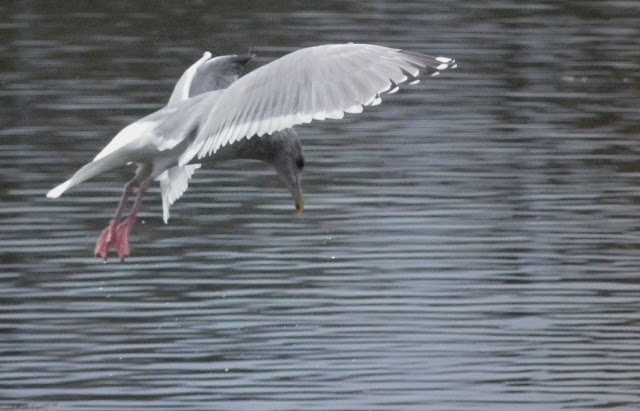 Another perspective of the diving, Herring gull. 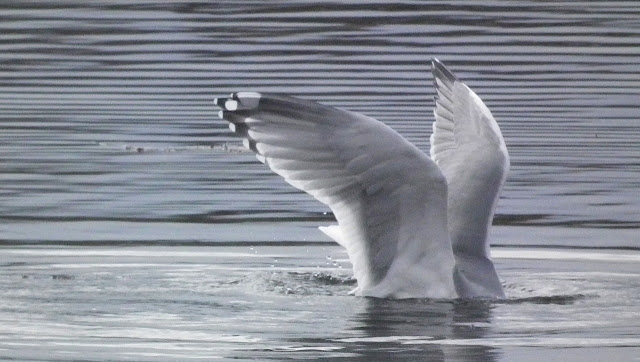 It never went all the way underwater. 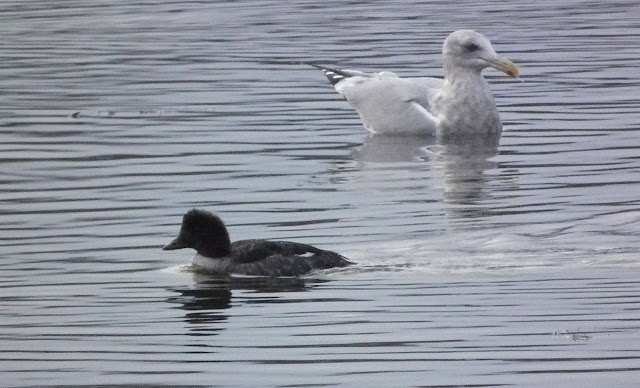 A Common Goldeneye passes in front of the Herring Gull. It gives some perspective on the relative sizes of the two birds. 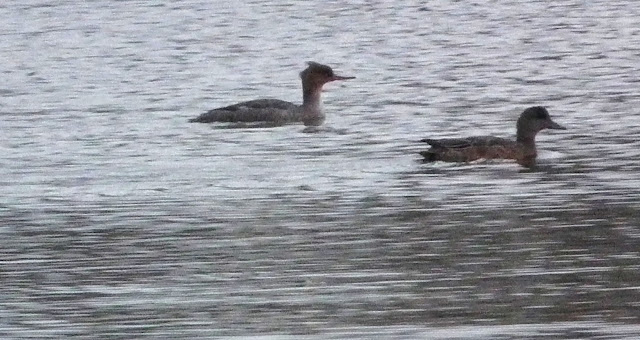 I have been wanting to see a long-tailed duck up close. A few weeks back upon leaving Calgary one flew right past my eyes as we were driving east. I could not believe it so I grabbed my bird book and quickly looked in the duck section and wow, I was excited. Of course there was no way to get to the pond it was heading for as we were driving through a highway construction zone.
Hugs!

just love your captures...really I do
too bad you and Dan postponed a bit
well...next time

Love the photos. My favorite is the submerged Herring Gull. Your little lesson in gull id just made me a better birder!
Hope you stay warm! We were "cold" a few days ago when a front dropped night temps to the 50's. But at least our days are not 100 any more.Today might not get much above 90!
Kay