Wild Critters on the Kenai 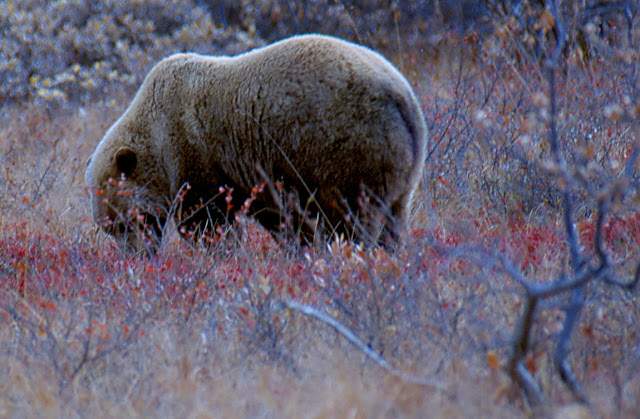 The wildlife of the Kenai Peninsula is representative of the whole state with a few exceptions like Musk Ox. Grizzly Bear populations on the Kenai have fallen low enough that they are no longer hunted. There are a lot of trigger-happy residents living there that dont care to share their space with bears, so plenty of them get shot every year anyway. 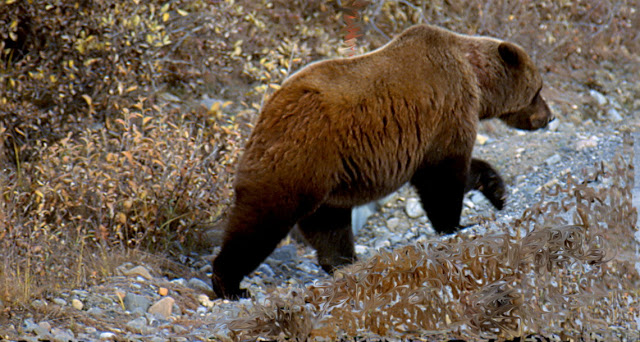 I have to admit that this photo, and the top photo, were not taken on the Kenai. I photographed these bears in Denali NP. The Denali bears, eat mostly berries and other vegetation. Kenai bears also eat a lot of salmon, and they tend to be bigger with shaggier fur.

Moose are particularly abundant on the Kenai. Even with heavy hunting pressure. Although I have photographed Moose on the Kenai, this resting bull was in Denali. 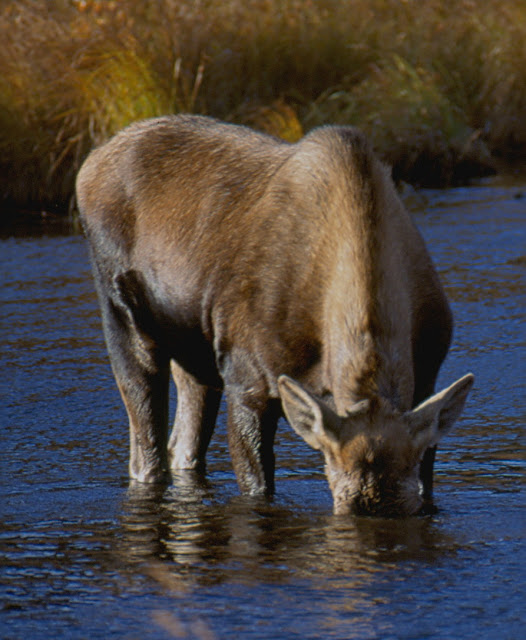 Another Moose in Denali. I chose to use these photos, instead of Kenai Moose photos, because they were taken in the Fall, while my Kenai photos were mostly taken at other times of the year. 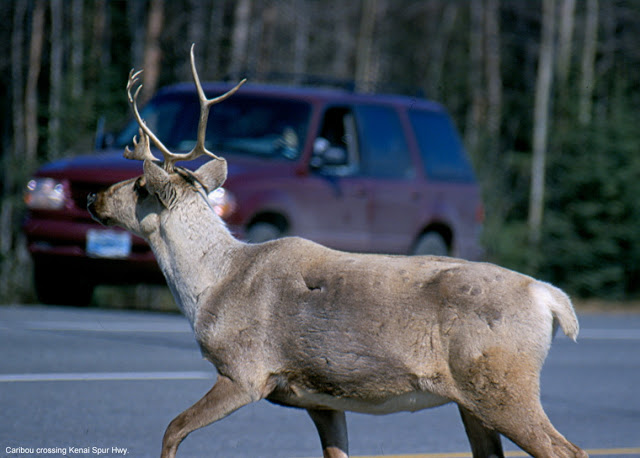 A one antlered Caribou crosses the highway. Both male and female Caribous have antlers. Judging by the size of this Caribou's antler, this is a cow. The Kenai population of Caribou is insular, meaning that they do not migrate far, like other caribou populations. 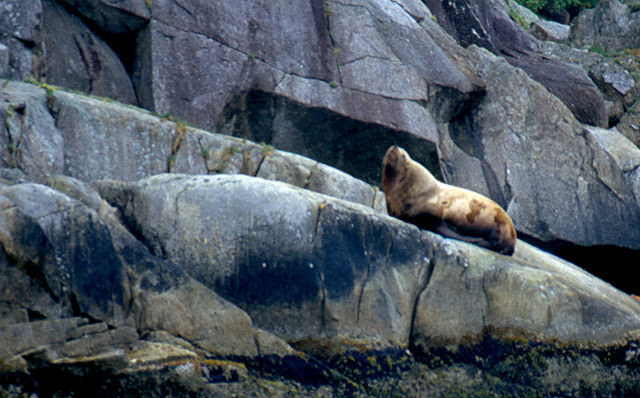 Probably the best part of the Kenai Peninsula are the spectacular coastlines. Kenai Fjords National Park is the crown jewel. There are many dramatic cliffs, and small islands where many seabirds nest. This is a bull, Steller's Sea Lion in Kenai Fjords. 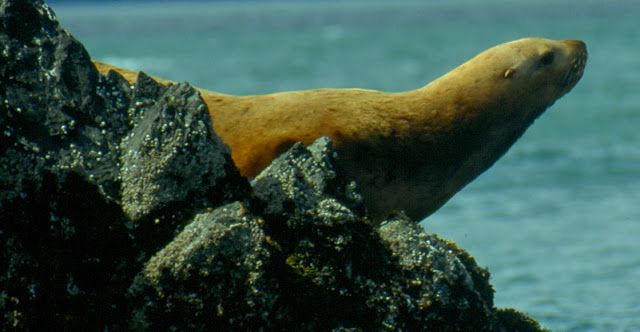 A cow, Steller's Sea Lion on Gull Island near Homer. Steller's Sea Lions are quite a bit larger than California Sea Lions. Their numbers have plummeted in recent decades. Many researchers have studied them to determine the cause of the decline, without finding a definitive answer.
In my opinion, overfishing, especially commercial fishing is the cause, either directly, or indirectly. The Coast Guard just caught a factory ship, illegally drift-netting in Alaska waters. No country will claim ownership, but the crew are all from Indonesia. The ship is also overun with rats.

A common inhabitant of the coasts around the Kenai is the adorable, Sea Otter. You can often see them floating just offshore in Homer and Seward.

The coastlines of the Kenai are also a good place to spot whales in the Summer months. Especially Humpbacks like these. 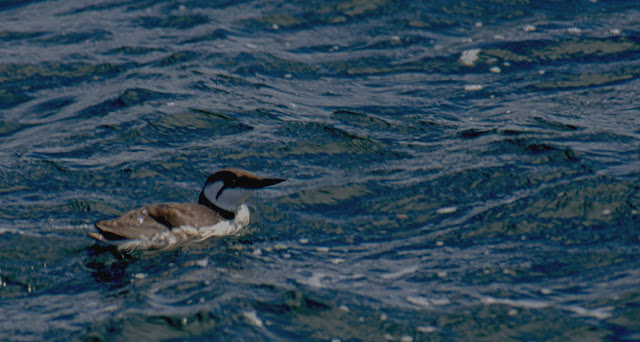 One of the most abundant seabirds of the Kenai, is the Common Murre. This bird wears it's non-breeding plummage. 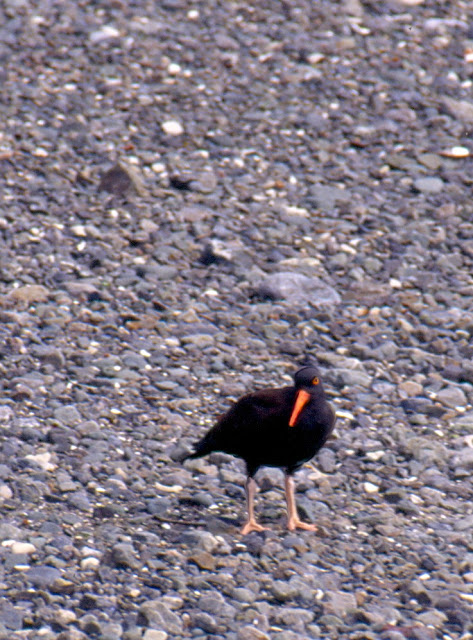 A distinctive inhabitant of rocky shorelines, the Black Oystercatcher. 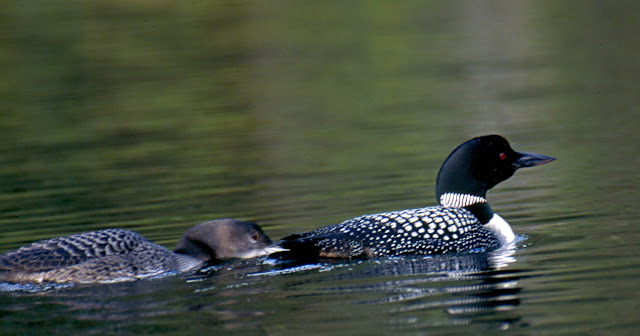 Right about now young Common Loons are gaining independence from their parents. Soon the adults will be wearing the same non-breeding plummage as the young loon in the photo above. They spend the winter along the coast. Usually south of here. 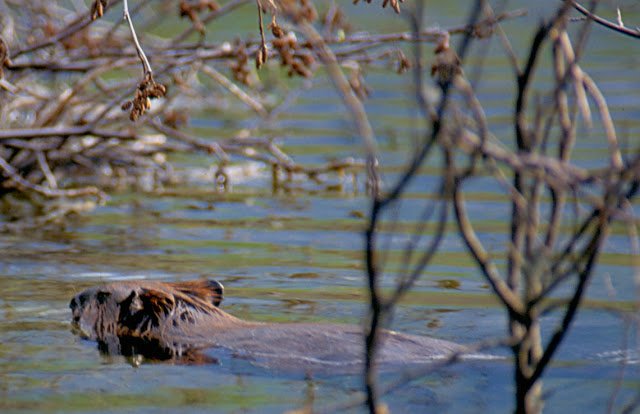 Beavers share some of the same waters as the loons. 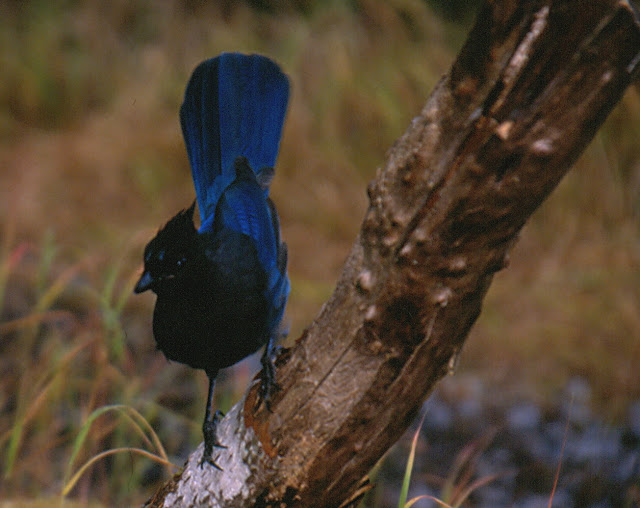 Steller's Jays are more common along the coasts of the peninsula, while Gray jays dominate the interior. I see more Steller's Jays here in Anchorage, but Gray Jays are around town as well.

A common game bird of the peninsula, Spruce Grouse. I have eaten a few. Some are very tasty, like Cornish Game Hens. Others are gamey, like an old buzzard. It all depends on what the bird has been eating. The male in this photo was right by Scott and Jean's cabin. We did not eat it.
There are enough interesting animals that live on the Kenai Peninsula, that I think I will do another post about them soon. Maybe I'll concentrate on seabirds although I dont have photos of most species.
Posted by john at 5:34 PM

oh this was grand