A Scary Bear Story on the Kenai

This is the time of year to go Moose hunting in Alaska. My grown nephews, Sterling and Danny are avid Moose hunters. The large amount of meat from a Moose really helps to supplement their family's food budget. 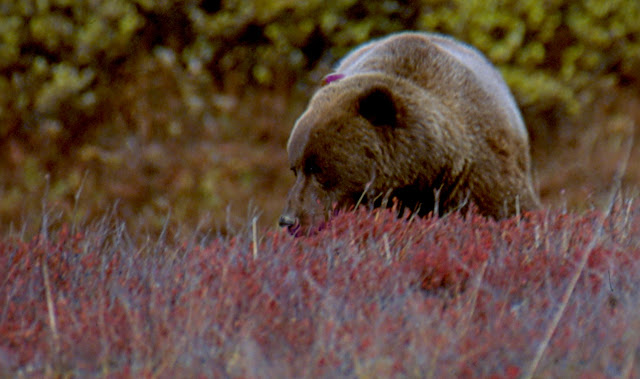 A few years ago, I accompanied my nephews on their annual Moose hunt. It was cold and rainy every day, and even snowed on us one night. That was enough for me, so I went home early. Sterling and Danny slogged on, and decided to check out the Swanson River area on the Kenai Peninsula. 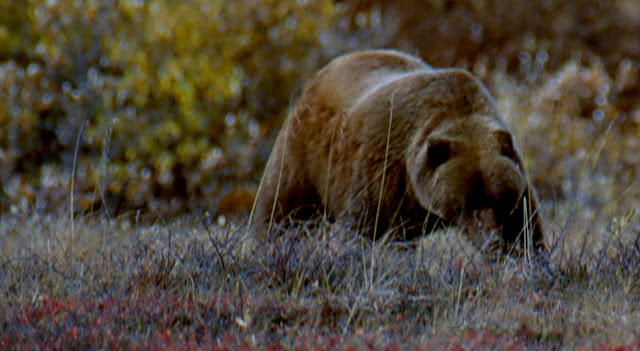 The thing about the Swanson River is that it is loaded with spawning salmon. Right about now is when the Coho Salmon are finishing up their annual spawn. That attracts bears.
My nephew Danny and I had explored the area on a previous Moose hunt, and saw an immense amount of bear scat and partially eaten salmon all over the area. 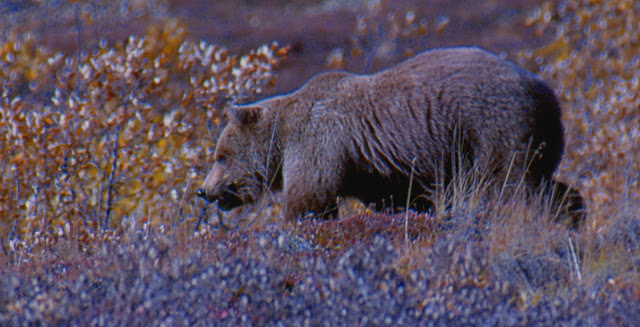 This time, Sterling and Danny were making their way up a side stream. They were out of the canoe, hauling it over a Beaver Dam. Sterling was pulling from the front, and Danny was pushing from the back. They were  in thick brush with little visibility... 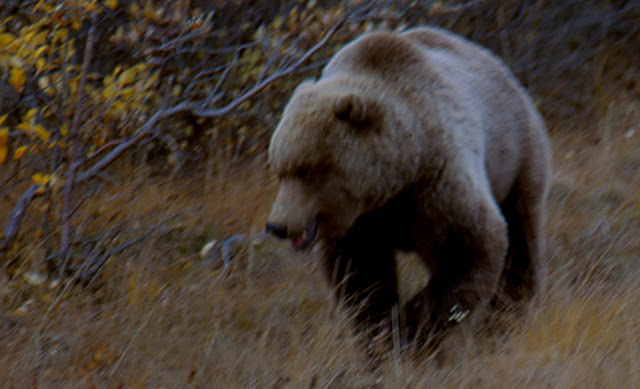 Sterling stepped around a bend  in the creek, and there was a huge Grizzly (not the bear in the photo). It saw Sterling in the same instant and charged. Sterling had just a split second to react, and shot the bear in the face at point blank range with his .270 deer rifle. The bear veered off, and ran into the thick forest. Sterling and Danny knew that a wounded bear is extremely dangerous, especially with other hunters and fishermen in the vicinity. They knew that they had to track the bear and finish it off.
They said a prayer, then followed the blood trail into the thick woods. The blood trail led them in a circle until they found the dead bear only about 25 feet from where they shot it. The bear was trying to circle around, and get them from behind.
It had a previous bullet hole in it's ear. Sterling's bullet did not even penetrate the bear's skull. It travelled around the skull, under the bear's muscles, and then entered the bear's abdomen, and penetrated it's vital organs.
They followed Alaska law, and cut off the bear's skin, head, and paws, which they brought to the nearest Fish and Game office. The people there were already familiar with that particular bear, and said that it had mauled some hunters the previous year. It stood 9 ft tall, and weighed 700 lbs. They got no Moose that year.
More to come from the Kenai soon. This time it will be a happier subject matter.
Posted by john at 5:19 PM

Wow that is crazy!!

Sorry for being so gruesome. Nature can certainly be very raw at times. All the bears in the photos were completely peaceful, in Denali NP.

Oh I'm sorry, that wasn't nice of me to say that...I just hate killing and hunting....I know I know....but I could not take another's life
and remember what I said about Mr.Moose....still stands...what can I say...I'm a 60 yr old kid
and don't get me going on Garfield Goose or Mr. Bunnyrabbit

This is exactly why I've never come to visit you! I'm so afraid you'll drag me off into bear country. I know, I have this irrational fear of bears. All those years camping in the White Mountains--I never slept 'cause I was listening for bears.

Maggie,
I've also spent many a sleepless night, worrying about bears. I kind of like it because it adds some oomph to the camping experience.
The truth is, I worry about people more than bears. During the same hunting trip that I wrote about, I went back to camp before Sterling and Danny. Shortly thereafter two armed men, (not fellow hunters), walked into camp without being invited.
Amoung hunters, this is an extreme discourtesy. They were acting very suspicious, and were asking too many pointed questions about who I was with etc.
Sterling had left me with a big shotgun, I think having that with me is what kept me from being murdered.